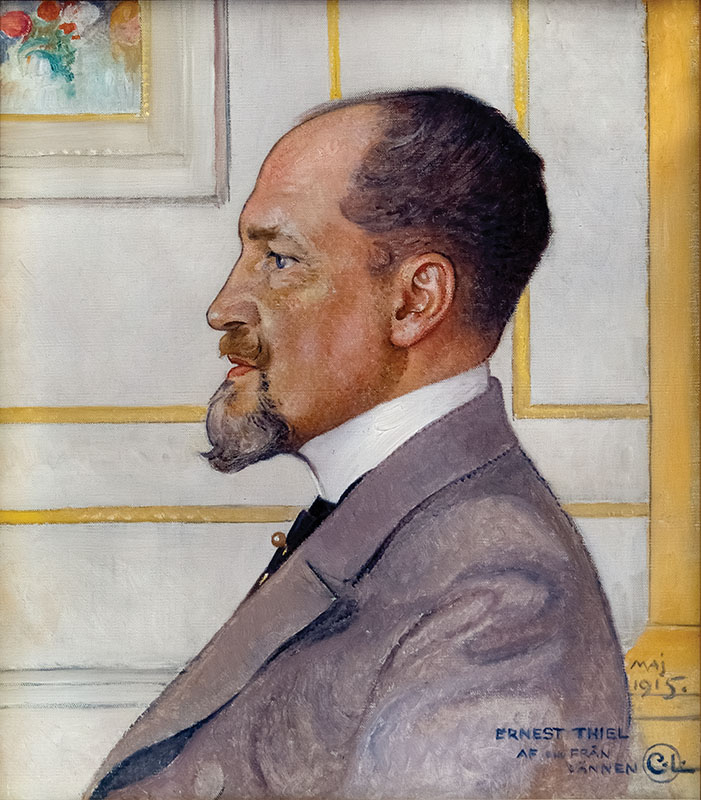 If fin de siècle Nordiccultural ferment—and contemporary global anxiety—is often summarized in shorthand by Edvard Munch’s The  Scream (1893), to enter the former home of Stockholm banker Ernest Thiel (1859–1947), a museum open to the public since 1926, is to dwell in the plush, cool parlors where such paintings were first revered as windows into the human psyche. Furnishings and architecture are unified with art in unexpected ways at the serene suburban Thiel Gallery, which can be read as a gesamtkunstwerk, a total work of art. It is a purpose-built, gallery-focused villa, inhabited by a translator and admirer of Friedrich Nietzsche, Thiel himself, whose patronage made it a hothouse where sexual warfare and social Darwinism were both the subjects of argument and tangible forces at play.

The collection as a whole is a window into the well-heeled Nordic soul, as it contains many patriotic and naturalistic landscapes as well as Munch’s initial version of what was renamed The Scream of Nature and The Shriek. Munch’s 1892 Despair (Fig. 2) is a study in silent alienation, though the contrast between the striated red clouds and faceless men seems loud enough. Since we have the 1893 version stuck in our collective consciousness, we supply the drama and the painting becomes fresh again, no matter how debased.

Thiel’s architect, Ferdinand Boberg, designed many other art nouveau masterpieces in Stockholm before and after this one in 1907, from the central post office (1899–1906) and the brick gasworks in Värtan (1893), which hulk like a cluster of industrial Pantheons, to Waldemarsudde (1903–1913), a villa, like the Thiel Gallery on the island of Djurgården, built by Prins Eugen, an artist as well as a collector.

Thiel hosted artists such as Bruno Liljefors, Anders Zorn, and August Strindberg, who partied in the first decade of the twentieth century in spaces in which their own paintings hung. A stormy landscape study by Strindberg in the Thiel collection might be said to graft onto nature the conflicts of class and gender that his plays posed. Visitors to the gallery surely had in mind the merits of modernity as well as carnal realities: Thiel’s divorce and remarriage to a younger woman who had been his children’s governess and wife’s lady-in-waiting mirrored Strindberg’s autobiographical story about his own parents breaking Swedish decorum by crossing class boundaries.

And yet Carl Larsson’s portraits of Thiel (Fig. 5) and his new wife transpose the two into dreamy light, just as Larsson aestheticized domesticity and memorialized his own family’s rustic simplicity in his books A Home (1899) and The House in the Sun (1909)—which were also influential in the United States. In the room dedicated to Larsson’s work (Fig. 9), his Model Writing a Postcard is quietly sensuous, with the red furniture hot against the model’s cool flesh. Larsson erases the distinction between bourgeois interior and artist’s studio.

If Larsson’s books, published in the thousands, fostered middle-class aspirations for the home beautiful, Munch and Strindberg and other artists were transcribing nature into existential angst in oil paint. As Munch wrote, “My art must be seen against the background of the heavy freight of my inheritance—tuberculosis on Mother’s side, mental illness on Father’s side (grandfather’s phthisis)—my art is a self-confession. . . . Yet at the same time I have always thought and felt that my art might also help others understand their search for sanity.”* Munch’s 1907 portrait of Thiel gives the banker both inscrutable strength and an undercurrent of insecurity, while his On the Bridge (Fig. 7) situates a group of luminous women in white as an impenetrable circle of sociability. Like Strindberg’s advocacy for suffrage and misogynistic protagonists, these paintings present us with enigmas and paradoxes. Richard Bergh consistently set man and woman as polar tensions in his paintings, and his Knight and Virgin (Fig. 4) is terrifically creepy. A girl stares out at us, and it is uncertain whether she wants the affections of the man in shining armor grasping her from behind. Unlike his helmet with its ridiculous plume, the dandelions underfoot are riveting, precarious, and ready to be blown to smithereens.

In the dozens of paintings by Bruno Liljefors, foxes hunting and ducks in evening light can seem cloyingly cute and quaint or vivid depictions of the theory of the “survival of the fittest.” His self-portrait as a hunter provides a way to reconcile these two interpretations, and recalls Frederic Remington.

Not to be missed are the furnishings made by Gustaf Fjaestad (Fig. 6). His carved chairs on display at the Musée d’Orsay and Stockholm’s Nationalmuseum draw no special attention, but here his massive three-part sofa, table, and chairs form an immersive environment. The ensemble designed for Thiel is part of a theater of virility in which Munch’s portraits of Nietzsche and Thiel are arresting flourishes. Fjaestad had worked with Liljefors and Larsson on large-scale murals and his paintings of winter woodlands hang elsewhere in the museum, but this weighty woodcraft, carved of pine to resemble pine boughs, sublimely cultivates romantic associations of nature indoors. Fjaestad and his wife, Maja Hallén, an artist in her own right, were among a small group of artists who settled the remote arts and crafts colony Rackstad, where she established a weaving workshop and Gustaf could draw on the considerable talents of the woodshop run by the three Eriksson brothers.

Thiel also commissioned two weavings from the Fjaestads that should not be missed, Saltwater (Fig. 10) and Freshwater, but easily can be: they hang on sliding pocket doors to two galleries and are usually hidden. The subject matter of the Fjaestads’ tapestries is water, and created with Hallén’s skill, the salt water appears to flicker with light, while the fresh water is murky. It is as if the two gallery wings were Lake Mälaren and the ocean itself convening in the Thiel Gallery. The views of water have no horizons and are framed by asymmetrical tree branches, as if we have scrambled to the shoreline and are about to plunge in. The arbors flatten the compositions, much like compressed space in a Japanese print, but, incongruously, illusionism still is in play too. Designed to be framed within the architecture, these ten-foot-wide textiles are masterworks that make the small museum feel immense and thoroughly tied to the local waterways of Stockholm—as well as to the global currents of art in 1900.

Ezra Shales is a professor of art history at the Massachusetts College of Art and Design.

*  The Private Journals of Edvard Munch: We Are Flames Which Pour Out of the Earth, ed., and trans. J. Gill Holland (Madison: University of Wisconsin Press, 2005), p. 20.