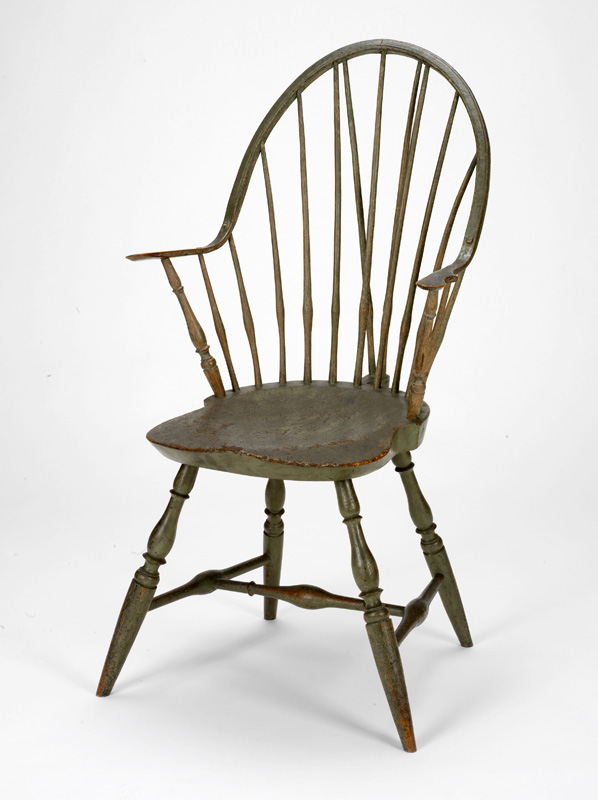 The work begins with the riving of logs. The wood is split by a series of wedges—rending the wood as one might tear open a dinner roll. With wedge, froe, and club, the chairmaker slowly creates short billets to be worked into seat and spindle, crest rail, leg, and arm. Once assembled, the pieces will season together, the green wood drying and expanding to form bonds without nails or glue. Hundreds of years later, the chair will go on the auction block with chipped paint and worn legs, and we will marvel at how long it has lasted.

The Windsor chair is, in theory, quite simple. The seat is made from a single piece of wood that is shaped to cradle the sitter gently. The spindles are carved, later turned, and run through the seat and into the crest rail or bow. The legs splay outward and run into the seat, but do not become part of the seat’s back. Different woods are used for different parts, and, once assembled, the chair is painted to hide the contrasting grains.

It’s been said that half of all wooden chairs on the planet are either Windsors or are directly descended from the style. Despite the ubiquity of the form, the history of the Windsor chair is muddled by folklore and specious theory. One version attempts to connect the chair’s origins to the Georgian royals. The story goes that one of the first Georges—which is not specified—was out on a country jaunt when inclement weather forced him to seek shelter in a peasant’s home. There, the king encountered a simple stick chair with a carved wooden seat. So impressed was he by the humble seat that he commanded that several be made for Windsor Castle. Another version speculates that the chair came from the shops of innovative wheelwrights who, finding themselves with a stockpile of carriage-wheel spindles, designed a chair to make use of them.

While these stories are entertaining, the chair’s origins may be found in the same way we go about classifying a new species—by searching out similarities of design. The closest relative of the Windsor chair is illustrated in the thirteenth-century manuscript of the Laws of Hywel Dda, a medieval Welsh king. Tennessee furniture maker Curtis Buchanan has affectionately described what it shows, a Welsh stick chair, as “a tank with style.”

The solid wood seat of these proto-Windsor chairs was pierced by “sticks” to form the legs and back, a method of construction different from that used for the mortise-and-tenon chairs made in England through the sixteenth century. Claims that the Windsor chair was widely produced before the year 1700 are unsupported by evidence. By the early eighteenth century, however, English makers were building enough of them for examples to survive to this day. The style’s leap across the Atlantic was chronicled in the postmortem inventory of the property of lieutenant governor of Pennsylvania Patrick Gordon in 1736, which included five Windsor chairs. In the colonies, the popularity of the chairs grew exponentially, and they were set beside kitchen hearths, filled taverns, and lined meeting rooms. In 1774 the Continental Congress sat on Windsor chairs. George Washington had thirty of them on the piazza at Mount Vernon.

The mass appeal of the Windsor chair was, according to Wolf Burchard, an associate curator at the Metropolitan Museum of Art in New York, due to two simple facts. They were comfortable, and they were affordable—or relatively so, at least. “They’re probably the most iconic type of English chairs,” Burchard adds, “but of course they’re pretty ordinary in a way.” The chair’s lightness and elegance attracted the wealthy; its relatively affordable price and durability made it accessible to almost anyone.

The chair’s popularity was helped along by the variety of styles that were available by the later eighteenth century. When Washington ordered “24 ovel Back Chairs” (more commonly known as bow-back Windsors) from Gilbert and Robert Gaw of Philadelphia in 1796, the menu of options was already vast. Chairs in the sack-back style, typified by a curved steam-bent crest rail, were produced in large numbers in Philadelphia and were tremendously popular by the time Washington placed his order. The comb back is believed to be the earliest design to have been made in the Americas and features spindles that run through a steam-bent arm rail, reaching upward in a way that can appear skeletal. The fan back does away with the arm rail altogether. Rod backs, or birdcage Windsors, stand out with simple, bamboo-style turnings or even painted lines to mimic where turnings would have been. The bow backs Washington selected were the simplest of the lot with a single arched back and no arms.

The continuous-arm Windsor armchair makes use of bentwood techniques that push the wood to the limits of its properties—and sometimes exceed them. Cracks and repairs are often seen on this chair style, particularly at the severe angle where the bent back turns to become the arm. A superb example of this can be seen in a Windsor armchair of 1780–1800 in the collection of the Rhode Island School of Design. The frank recklessness of the angle taken in the transition from the chair’s bow into the arm has all the appearance of the solidity of the ramshackle home of Dr. Seuss’s Once-ler.

What we often fail to see in Windsor chairs is the inimitable dynamism of their materials. To understand how a newly made green wood chair moves, we sought out Tivoli, New York–based chairmaker Michael Billeci, who makes traditional Windsor chairs by hand. It is difficult to express the elasticity of these chairs, which can contort like a bendy straw, only to spring back the moment pressure is removed. This is how Windsor chairs were meant to move, and Billeci’s chair, made from maple, pine, and oak, was a fabulous illustration.

As different portions of the chairs must accomplish different tasks, chairmakers make use of the characteristics of a selection of woods. The undercarriage, arms, stumps, and short spindles have to withstand stress while holding the crisp details from their turning; maple and yellow birch work perfectly. The seat is made of a comfortable wood that is soft enough to accept faceted tenons—such as pine or poplar. The thin bow and long spindles must be tough and flexible; oak, ash, and hickory are common choices. “I’m not re-creating anything new about the chair,” Billeci says. A new Windsor shows us what our antiques once were.

But sometimes what they have always been is nothing like what we expected. The familiarity of the Windsor chair may breed something like contempt. There are only four Windsor chairs owned by the Met. (By contrast, there are hundreds in the collection of Britain’s National Trust.) One particular style of Windsor chair at the Met—dating to about the 1760s and on view in the newly reopened British Galleries—defies the neat categorizations we’ve set out above. The finely shaved spindles are discarded for a broad, openwork splat worked with Gothic tracery. A pointed Gothic arch is used in place of a more traditional bow back. The chair is an example of the very early stirrings of what would become the mid-nineteenth-century romantic movement, already present in the drawing rooms of the Georgian elite.

Burchard, who is responsible for British furniture at the Met, believes that, given the distinguished appearance of the chair, it was likely made for a Gothic folly on the grounds of an estate. “It’s a very fine example of a Windsor chair, and it’s not the standard thing. The majority of Windsor chairs were often in the staff quarters and not upstairs in the house.” This piece illustrates how the Windsor form has always been seen as dynamic and adaptable.

Outside of museums, the Windsor design continues to permeate our daily lives. Whether from the humblest used-furniture seller or the most prestigious auction houses, the chair continues to be sought after. In November 2006, at Freeman’s auction house in Philadelphia, a small comb-back Philadelphia example retaining early green paint sold for a staggering $65,725. Today, finding an antique Windsor without significant repairs and with known provenance and the original paint for less than six months rent remains a dream for many a collector. It’s possible, but it takes persistence.

As early as 1917, Wallace Nutting, the trailblazing advocate for the colonial revival style, noted in A Windsor Handbook that “no other style of furniture has been so persistent and kept its quiet place while other styles came and went.” It is in its dynamic tensions—between historic roots and modern interpretation, staid solemnity and exuberant energy—that the Windsor design has captured and kept its hold on American sentiment and made itself so central an element in all that makes us feel at home.