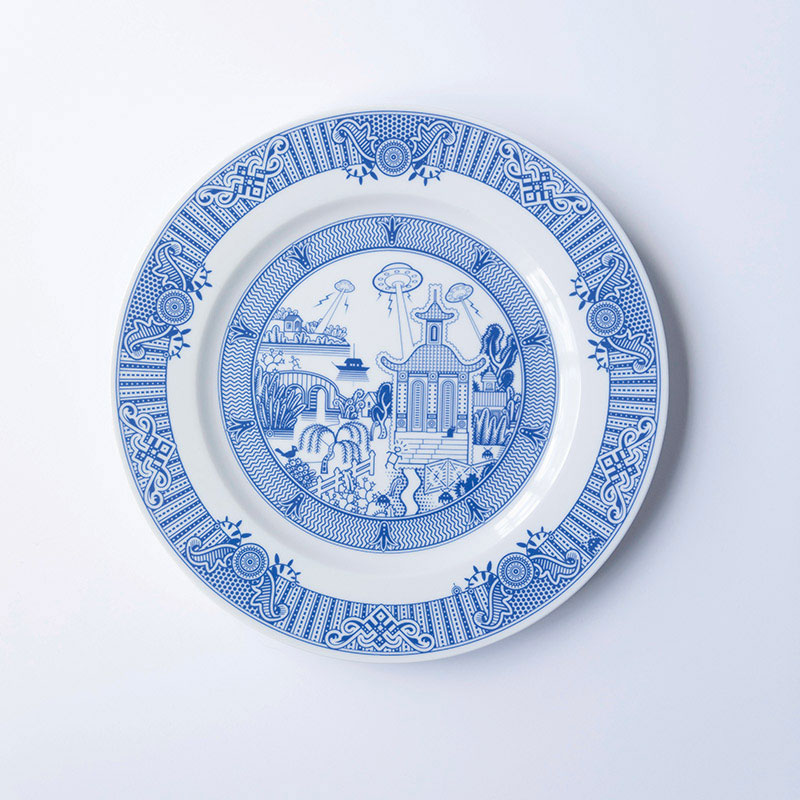 On the right-hand side of the dinner plate is a grand Chinese house that, as the legend goes, belonged to Ta-Jin, a man of immense wealth and political power. One day, a youth named Chang came to conduct business, and, upon seeing the man’s daughter, Koong-See, fell instantly in love. She felt the same, but her father forbade the two from meeting. Over time, Ta-Jin erected higher and higher barriers to keep the two apart, literally rebuilding his home to thwart his daughter’s escape. When Chang finally found a way to set Koong-See free, he took immediate action, and the lovers’ flight is illustrated on the plate by figures on a bridge, rushing to a new life. Tragically, their freedom was short-lived. Chang was killed in retribution for orchestrating the escape, and Koong-See committed suicide, killing herself rather than be forced to marry another man. “In pity to Koong-See and her lover,” noted an article in The Family Friend in 1849, a British periodical of the time, the gods transformed the pair “into two immortal doves, emblems of the constancy which had rendered them beautiful in life, and in death undivided.”

It is a well-worn tale of star-crossed lovers that transcends time and cultures. It is also utter tripe. The legend is a nineteenth-century fiction cooked up to sell the Willow pattern, a classic chinoiserie transfer-ware design first produced in the 1790s in the Staffordshire kilns of porcelain maker Josiah Spode. The Willow pattern was extraordinarily successful in its time, and today it remains one of the most popular ceramic patterns ever produced. More interesting, though, is how the imagery printed on hundreds of thousands, if not millions, of pieces of dinnerware permeated British society and became ubiquitous within the material culture of the Victorian era. Indeed, the pattern was so common that the Museum of London Archaeology has uncovered more than 4,463 fragments of Willow pattern vessels from 235 sites in London alone.

The pattern is striking. The design is made up of a hodge-podge of imagery—pagodas, landscapes, birds, and trees—common on the true Chinese porcelain of the preceding centuries. Indeed, as Robert Copeland noted in his book Spode’s Willow Pattern and Other Designs After the Chinese, the “Willow Legend,” despite being entirely apocryphal, is helpful in identifying the principal features of the pattern—the bridge, the persons crossing it, the willow, tea house, fenced garden, and two birds each illustrate moments in the story. The design is quintessential chinoiserie, fueled by Western interest in China and the rest of Asia. It is all about the style over substance.

In Britain, interest in “the Orient” was feverish, if uninformed, in the eighteenth and early nineteenth centuries. Tea, porcelain, and other imports captured people’s attention and sparked their imaginations, and china patterns conveniently provided visuals to accompany cultural conceptions of the Far East. In theory, learning about a culture through the images it produces is not a terrible strategy, even if it only offers a narrow lens. The sheer prevalence of the Willow pattern made it the primary vehicle for exposure to Chinese decorative elements and symbols— and yet, it was an English invention. It would be like believing oneself to have a deep understanding of Mexican cuisine based solely on close study of the menu at Chipotle. Sure, some of the flavors line up with reality, but the combined whole is an American invention.

Over the course of the nineteenth century, variations on the Willow pattern were produced by more than fifty different manufacturers. This growth was fueled by the development of transfer printing, as well as by improved methods of porcelain and cobalt dye production. Before transfer printing, ceramics were painted by hand, a laborious and costly process that was incongruous with mass production at the scale the industrial revolution demanded. Transfer printing used an engraved copperplate to maintain the high quality of representation provided by hand-painting at far less expense. This was music to the ears of any early industrial-era business owner. With a process for mass production in hand, all manufacturers needed were patterns to print.

At first, many of the early pieces Spode produced using the transfer method were copies of patterns brought in by customers looking to replace individual pieces without sending away to Canton for a single bowl or cup. Quickly, Spode began to also offer full sets of copies for those customers unwilling, uninterested, or unable to order from the manufacturers in Jingdezhen. He produced copies of at least twentytwo Chinese original patterns early in his career, and in time came to interpret and alter such patterns, creating wholly new compositions, comprised of well-known images and symbols, which he offered to the domestic market. This is how, in the 1790s, Josiah Spode’s most successful design came to be.

No Chinese pattern exists that contains all of the features of a standard Willow pattern piece, but when Spode designed the pattern he appears to have worked from some Chinese porcelain wares in a pattern the English called “Mandarin.” With that as inspiration and foundation, he fused together elements from many different Chinese pieces to create something that would feel authentic to the British consumer.

This method of reproducing Chinese designs was a common one at the time, and it has sometimes been claimed that other manufacturers developed the Willow pattern ahead of Josiah Spode. Chief among those put forward is Thomas Turner at Caughley, Shropshire, whom the Encyclopedia Britannica claims to have, in 1779, developed the Willow pattern in “imitation of the Chinese.” It is true that Turner’s pattern was much truer to the Mandarin pattern Spode used as the base for the Willow pattern. However, his pattern lacked many of the elements that define the standard Willow pattern and are best considered to be copies of the Mandarin, rather than a true Willow. Thomas Minton, an apprentice engraver at Caughley in the 1780s who opened his own firm in the 1790s, also created designs that lacked some elements, such as the bridge and the fence in the foreground. Spode subsequently acquired these patterns, and from them developed the English Willow pattern.

It is striking, and perhaps honorable, that Spode never claimed that his pattern was a Chinese original, or even told an authentic story. The legend was crafted retroactively, gaining traction in the middle of the nineteenth century, potentially as a veiled critique of the Chinese political system.

To enter the cultural mindset of the era, it is important to situate ourselves in the confused world of political and military stalemate that was the “Opium War Interlude,” as historian James M. Polachek termed it. The period from 1835 to 1850 was a time “marked by frustration, provocation, and military action on both sides.” The British, who had so recently been enamored with the imagery of Chinese culture, struggled to make actual sense of that very same society. As British interaction with China went from zenith to nadir with the fortunes of war, British establishment opinion grew ever more vexed by the perceived “backwardness” of the Chinese empire for its unwillingness to import British opium. Many in the British public were primed to receive stories that demonized members of the Chinese state—even as they remained receptive to the notion that there were good, “honest” people in Chinese society with whom the British people could connect. The Willow legend was the perfect tale to fill this vacuum.

If the legend is interpreted as political allegory, its meaning becomes strikingly clear—and lands far from superficial romance. Ta-Jin, a Chinese official, stands in for British perceptions of the power structures of China of the era: corrupt and vengeful. The wrongs he commits against the young couple are meant to outrage and horrify the audience, perhaps galvanizing them to save the Chinese people from any future cruelties—by force of British arms, of course.

A Victorian audience would readily recognize the conventional conflicts of the Western romance—the young versus the old, romance and love versus filial duty. The tale appears timeless, but only to a European cultural background, and for the specific political moment of the Opium War Interlude. This is perhaps why the legend behind the pattern is so enduring: it has offered a narrative justification for deeply imbedded conceptions of Chinese culture for two centuries.

An “ancient Chinese pattern” invented by an Englishman in the 1790s; an ancient Chinese legend fabricated in the 1840s by English-speaking busybodies. These are elements of the baggage that accompanies—and perhaps helped to create—the most popular china pattern in modern history.