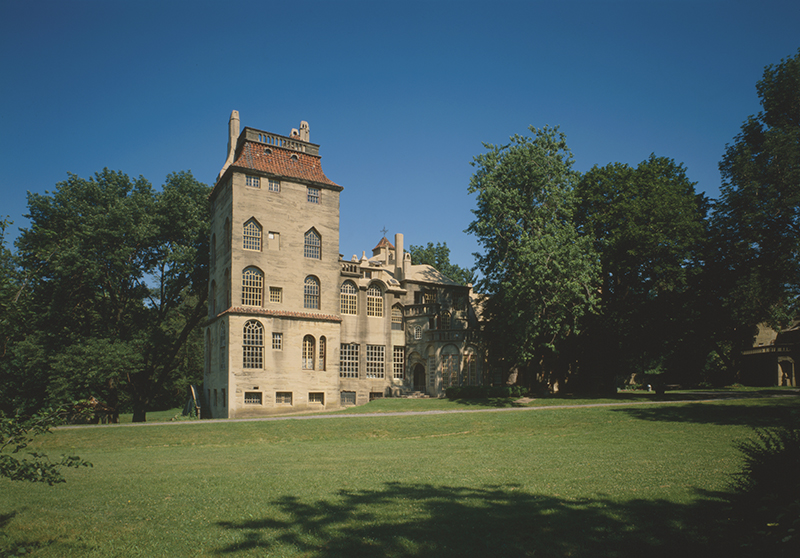 It was around 9:30 on the evening of June 24, 1910, when the flames were first spotted. A fire, so went the initial reports, had engulfed a barn just outside town. But when the fire brigade arrived at the scene, they found neither a barn ablaze, nor panicked farmers with their lives and livelihoods hanging in the balance.

Far from accidental, the fire was being tended with diligence. The blaze, reported the Doylestown (PA) Intelligencer, “which Henry C. Mercer had made on top of his concrete mansion,” was meant, primarily, to celebrate his birthday, and, secondarily, to showcase the fireproof qualities of his newly completed reinforced-concrete fortress of a home—one festooned with colorful, eye-catching tilework throughout. As the journal Cement Age noted, “this is the sort of story that is causing the insurance man to sit up and take notice.”

Insurance executives were far from the only people taking notice of Henry Chapman Mercer. At fifty-four years old, Mercer had been an archaeologist, a world traveler, a curator and museum director, a scholar, a successful businessman, an inventor, and was a potter of growing prominence. The scion of two genteel Pennsylvania families, Mercer was born with a royal road to respectable provincial success laid before him, only to turn and make his own way.

After graduating from Harvard and passing the bar, many expected Mercer to either become a judge or run for Congress. Instead, he confounded them all, spending the great majority of the next eight years, from 1881 to 1889, on an astonishingly lengthy Grand Tour through Europe, and even as far as Egypt. It was in these years, says Cory Amsler, vice-president of collections and interpretation at the Mercer Museum in Doylestown, that Mercer seemed to find himself, and he relished opportunities for greater learning and deeper understanding. Upon his return to the United States, it was clear that something in the man had changed. To compare the Mercer of disparate interests and meandering mind who had left with the confident, driven, uncompromising fellow who returned was like watching a dynamo being switched on—a lifeless, lightless, unremarkable scene transformed in an instant into something positively aglow.

From then on, Mercer threw himself into furthering the curiosities and passions ignited while abroad. While curator of what was then known as the Free Museum of Science and Art (now the Penn Museum), he participated in far-flung archaeological digs searching for evidence of man’s prehistoric presence in the Americas—a theory that was proven correct with the discovery, in 1929, of the Clovis, New Mexico, site by Ridgely Whiteman— and published numerous lengthy articles, along with two books. His mind was a power-house, and his capacity for formulating and synthesizing the relationships between subjects was called genius by his contemporaries.

And yet, his keen perception came with a price. Mercer, as Amsler puts it, “had no patience for collaboration,” and “he was not interested in sharing control.” When this tension led to a break with the museum in 1897, Mercer began searching for a new object of interest. Soon enough, he found it.

For years, Mercer had been fixated on finding the small remains of the everyday life of prehistoric man at his archaeological digs. But as he traversed Pennsylvania and with his mind free to wander, he realized that the old rotting barns and rusting farm equipment, evidence of the daily experiences of his parents’ generation, would someday be a future archaeologist’s discoveryof- the-century. Amidst the refuse, he recognized that he stood among the ruins of another Troy, another Pompeii—albeit, one that would interest almost no one until it was lost for a few dozen centuries.

Within the piles of farmyard rubble, Mercer searched most keenly for iron parts from the eighteenth-century German wood-burning stoves bearing figural scenes of biblical stories. These scenes delighted him. Something about the tidy, practical efficiency of the communication spoke to him. Using the skills he learned from a Pennsylvania-German master potter, he experimented with re-creating the scenes from the iron stoves as decorative clay tiles. These designs became the first of the five thousand molds produced by the Moravian Pottery and Tile Works over the course of Henry Mercer’s life, starting in 1899.

Picking up one of Mercer’s Moravian tiles today, they appear strikingly ancient. It is an effect Mercer took considerable pride in, striving for pieces that could be, in his own words, “mistaken for tiles from a former civilization, because they are made in the same way a less hurried civilization made them.”

Holding one, it immediately becomes clear just how handmade these tiles truly are. Their sides and reverses almost always exhibit edges that would probably earn a “Please see me after class” note from a concerned pottery instructor. Carefree in their lack of uniformity, the tiles almost seem to have been fashioned in an age before standardized weights and measures existed. Similarly, the glazing, especially on those tiles with both slip underglazing and a painted glaze, appears so free from affectation, it would make a cat jealous. The lack of preciousness telegraphs that these are hardy tiles, made for a purpose, able to withstand heavy use—all qualities that contrast with the tiles’ elaborate and whimsical designs.

All the tiles made today at the Moravian pottery are based on Mercer’s designs and are formed individually by hand in one of two ways. In the first method, the clay is rolled out and cut into shapes before a mold is pushed down into it—this is called the stamp mold process. In the second process, the clay is pressed into the cavity of a mold—this is called the press mold method. Both methods achieve incredibly detailed and legible designs, and the molds can be used again and again.

The majority of Mercer’s tiles, writes the historian David B. Driscoll, were made with the exceptional red clay found in Bucks County, and were offered in more than fifty finishes. Over time, the most characteristic style became slip underglazing, a process developed by Mercer himself in which a red clay tile was dipped into a buff or gray slip and allowed to dry before being dipped into a colored underglaze. While still wet, this underglaze was wiped off the raised portions of the tile, leaving color only in the recessed areas.

In his lifetime, Mercer’s tiles were both extolled for their quality and embraced aesthetically within the arts and crafts movement throughout the United States. Those produced during his lifetime are still sought after by collectors and restoration enthusiasts. Original tiles, or those produced before Mercer’s death in 1930, can run anywhere from $22 to $400 at auction. Those interested in acquiring complete sets without the hassle of piecemeal accumulation can also refer to the Moravian Pottery and Tile Works, operated by the Bucks County Department of Parks and Recreation until recently. Those made under Bucks County management are marked on the reverse with the year of their manufacture. The new lessee of the property, Mercer Arts and Industries at the Moravian Pottery and Tile Works, will continue to manufacture the tiles using traditional methods.

For those who ask what justification there is for purchasing some of these tiles, we would respond as artist Madeline Yale Wynne did in 1901: Mercer’s tiles “are their own justification.”