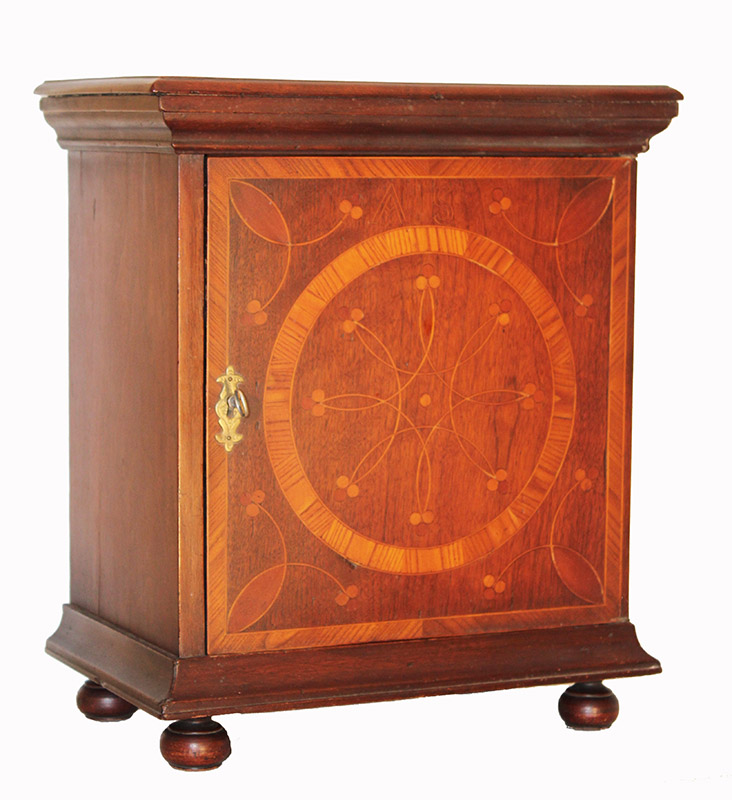 When we first started digging into the history of these little cabinets, there were many points everyone could agree on. They are petite, sweet, have small feet, or sit on a purpose-built stand. They are populated by drawers that are always secured behind a locking door. While some New England examples exist, almost all surviving eighteenth-century American versions of the form come from Chester County, Pennsylvania, where they were popular among Quakers and the best were most often made of walnut or mahogany. Especially fine examples were intricately inlaid with woods such as holly, red cedar, and locust, further emphasizing the wealth and status of the individual with the key. They were displayed on tables, lowboys, or chests of drawers in prominent places in the home. As collectible objects they hold their value well, are rare, and are consistently in high demand.

Plenty to go on, we thought. But it soon became clear that there are many “facts” about the boxes on which no one seems to agree. Two points, in particular, prove problematic for experts in American furniture and dealers well-versed in the form. One question is what the little locked chests were meant to hold—but we’ll get to that later. First: what we should even call these pieces of furniture?

According to Josh Lane, the Lois F. and Henry S. McNeil Curator of Furniture at Winterthur, many terms have been used over the years, including spice box, chest, and cabinet, but he believes “spice box” is the most appropriate. In an investigation of Pennsylvania household inventories from the middle of the eighteenth century—the height of the form’s popularity—“spice box,” Lane says, “shows up fairly frequently.”

Alexandra Kirtley, Montgomery-Garvan Curator of American Decorative Arts at the Philadelphia Museum of Art, acknowledges that many terms have been used to describe the form, and in her study of early Philadelphia estate inventories, all three terms show up—and she cannot know exactly what the appraisers were describing in their subjective descriptions.  So she ascribes the term that best suit the forms.  “Cabinet,” she says, feels formal, intimate, close, and private, whereas “box” seems too basic a word for an object so fine.

Alyce Perry Englund, associate curator of American decorative arts in the American Wing at the Metropolitan Museum of Art, agrees with Kirtley when it comes to the issue of “cabinet,” but she would do away with “spice”—a bold suggestion that threw us for a loop.

We’ll follow the inclination of Kirtley and Englund, because we personally prefer “cabinet.”  But how is it that simple terminology can be so fraught? Then again, collegial debate is the scholarly crucible wherein nearly everything interesting happens.

Having settled on “cabinet,” what about Englund’s attitude towards the term “spice”? Spice cabinets were, we always believed, something of the culinary world. They were not kept in the kitchen, perhaps, but were intricately linked to the daily choreography of cooking. Imagine our surprise when we learned there is disagreement over whether the “spice cabinets” explored here had anything to do with spices at all.

There isn’t an easy contemporary analog for the role and value spices held in eighteenth-century America. Unlike many imported staple goods, spices have no caloric value in and of themselves. They were an entirely superficial extravagance. “Using them,” says Frank Clark, Master of Historic Foodways at Colonial Williamsburg, was “a way of showing your wealth.” The amount of spice you used, Clark says, was “all up to your pocketbook.” More was, quite literally, more.

But were spices so esteemed that they merited their own showcase furniture? Over the past few decades, Skip Chalfant of H. L. Chalfant Fine Art and Antiques, a leading dealer in Chester County spice cabinets, has conducted an informal experiment, hoping to clarify whether spices were kept in the drawers. His simple method: the sniff test. “Occasionally I’ll smell nutmeg in a drawer, but rarely,” he says. And why, Chalfant asks, “would you have secret drawers”— a common feature of the form—“for spices if they’re locked inside anyway?” Cinnamon was special, but not secret-door special.

So what were those secret drawers hiding? Josh Lane is confident that valuables—such as gold buckles or ivory combs—may have been stored in the cabinets, and he shares some of Chalfant’s skepticism about spices themselves. Perhaps, he speculates, spices used for making punch or finishing a drink may have been kept there, as the pieces were kept in social gathering spaces, but even that feels to Lane like a bit of a stretch.

To Kirtley’s mind, these cabinets were modeled on the English curio cabinet and were used to hold, in addition to valuables, such objects as remarkable examples of flora and fauna, religious items, ribbons, and other expensive fabric trimmings. While Kirtley’s interpretation may be startling, her fellow curators believe she has grounds. If, for example, valuables and rare spices were stored in these finely wrought wooden drawers, Englund asks why were they not lined with metal like tea boxes of the same era?

Questions like this led Englund to adopt her own spice-less interpretation. While the cabinets may have held exemplary specimens of flora and fauna, she sees them more as vessels for coinage and heirloom jewelry, and perhaps even costly spices. But if spices were regularly kept in these pieces, they would have left more evidence—either in structural accommodations made for them, or, if kept in unlined wooden drawers, the spices would have left residual chemical traces on the wood itself. Englund knows of no studies that confirm that notion, however.

How, then, did the cabinets come to be associated with spices at all? A very likely origin for the market’s embracing of the “spice” term, according to Englund, “probably traces back to the late nineteenth-century colonial revival” and a desire for a shared terminology that simplified the marketing of a particular form. She would prefer to see them called “valuables” cabinets, but “spice,” she says, “is part of the mythology.”

While listening to Lane, Kirtley, Chalfant, and Englund discuss these small, poetic pieces, often less than twenty inches tall, we found ourselves impressed by the passion these little mysteries could inspire. There is something elusive and wonderful about the cabinets, almost in the manner of an Advent calendar: who knows what the next drawer may hide?

This mysteriousness helps these petite pieces punch far above their weight. As Kirtley remarked, “the cabinet of curiosities of the baroque period becomes a personal thing.” Comparisons to the curios of the baroque era keep these pieces in their chronological context, as they have far more in common with the medieval reliquaries that preceded them and the private museums that would follow them than with any direct descendant that occupies a place in domestic furnishings today. Whether they held rare spices or remarkable gemstones, ancient relics, or pretty ribbons, their role was the same in each case—to keep safe the things people valued.

Today, spice cabinets are highly sought after not only because of their rarity, but also for a kind of chameleonic quality. They are both familiar and uncommon; traditional yet capable of inspiring wonder. Buyers today should expect to pay $10,000 and above for a fine Chester County piece, more if it is inlaid with a line-and-berry or other design, and exponentially more if the cabinet is from New England. Chalfant advises prospective collectors to get a copy of the 1986 book The Pennsylvania Spice Box, by Lee Ellen Griffith; to visit the Chester County Historical Society, which has the best collection of spice cabinets in the nation; and to build a relationship with a dealer who shares your enthusiasm.

While there is no absolute truth to be found on the role and function of colonial spice cabinets, Englund encourages enthusiasts to view them along the continuum of forms devised to protect the things we treasure. Those examples that have survived testify to a wonderful moment in domestic life, when people sought to draw the wider world’s mysteries into their everyday lives.

This version of the article reflects revisions necessitated by an editing error.