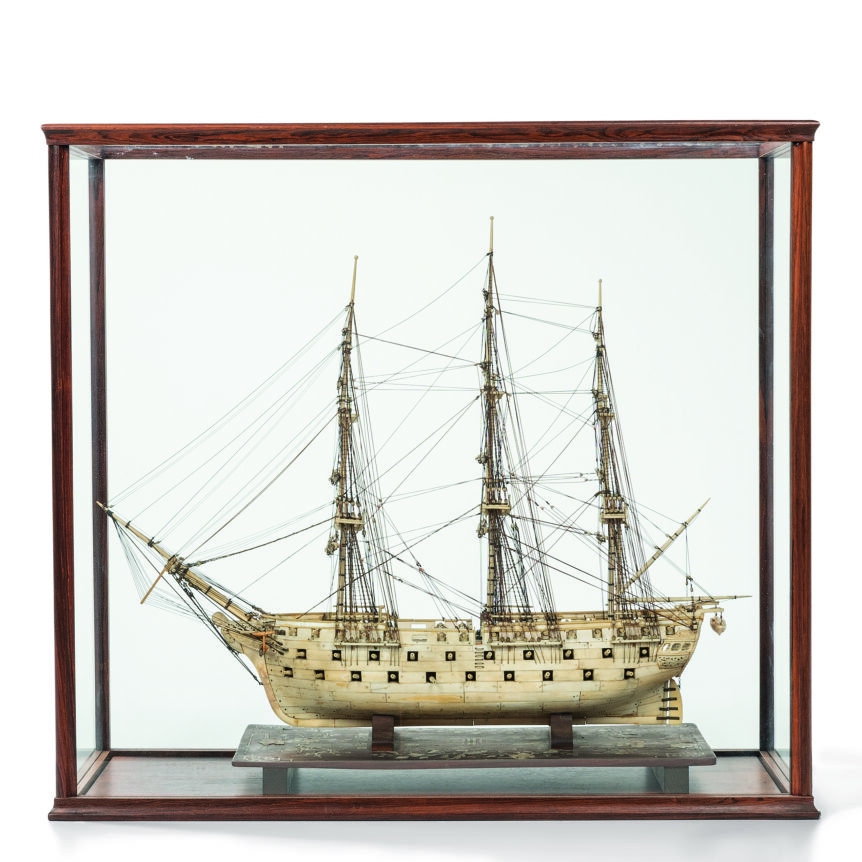 It was the winter of 1806, and the Frenchmen were growing hungry. Packed together with a mere two feet between them when lying down, the mass of sodden humanity was as bored as it was famished. The daily ration—when it was even delivered— consisted of watery beer, a hunk of bread, and a gnarled bit of mutton on the bone. When everything was eaten, the bones alone would remain. There was not much to do in the hold of an English prison ship, but there were the bones, and there was time. From these two sprang works of vibrant artistry and whispered testimony—the ships of bone and hair.

Between 1793 and 1815 some quarter of a million French prisoners of war were held captive in Britain. Captured while fighting first for Revolutionary France and then later for Napoleon Bonaparte, the enemy soldiers were held in a deliberate effort by the British government to starve France’s forces of manpower. This ran counter to the traditional practice of ransoming or trading captured soldiers.

Revolutionary and imperial France were so unprecedented as political entities that many of the long-held traditions of international warfare had to be rethought. Before the period of the French Revolution, most armies were still modeled on customs of conflict dating back to the Middle Ages. The treatment of captured soldiers had roots in the murky depths of feudal hierarchy and obligation, and an officer was ransomed or paroled based on his private means. Most enlisted men were traded in large batches, with each side effectively agreeing to “give you ten of yours for ten of ours.” But the violently egalitarian ideology behind the French Revolution declared that all such medieval roots were illegitimate and evil. The revolutionary government had executed much of the aristocracy of France’s ancien régime, and no blue-blooded English gentleman could negotiate with the aristocides among the French and survive politically. It was easier to support a policy of indefinite containment.

As such, except for a brief pause during the year of peace following the signing of the Treaty of Amiens (1802), no troops were exchanged. At first, the British held their French prisoners in purpose-built prison camps. But within the first few years of the worldwide conflict, the prison camps proved too small. Another solution was required, and the British turned to using prison hulks to hold the men.

A prison hulk is a decommissioned warship, often with its masts removed, floating just off the coast and used to hold prisoners for long periods of time. The first large scale use of hulks arose during the American Revolution. The men imprisoned on the hulks were reduced to a wretched state, and the hulks were widely acknowledged as inhumane. But they did provide a superficial solution to the overcrowding of land-based prisons. When a simple answer to what could be done about the influx of captured French soldiers was needed by Parliament during the French Revolutionary conflicts, the prison hulk reemerged as a cost-saving solution. Aided by the added capacity, the British established what could be called a policy of “hold everyone indefinitely and see what happens.” The French complained about being starved of men less than one might expect. Britain, they reasoned, may well go bankrupt feeding and housing their own enemies. If so, all the better for France. Members of Napoleon’s forces (not all of whom were French) caught and held by the British were left to wait out the war’s duration.

While they waited, the prisoners kept their hands busy. At the outbreak of the war, the Royal Navy Transport Board decreed that: “[T]he prisoners in all the depots in the country are at full liberty to exercise their industry . . . in manufacturing and selling any articles they may think proper excepting those which would affect the Revenue in opposition to the Laws, obscene toys and drawings, or articles made either from their clothing or the prison stores.”

Guided and constrained by these strictures, the prisoners got to work fashioning decorative pieces, both functional and artistic. They used the aforementioned mutton bones, whalebone, wood, and even their own hair to make toys, models, boxes, pictures, and, most famously, model ships. They were permitted to sell their work to the public at weekly markets at the prison depots, where they could, in turn, purchase fresh food and everyday conveniences to supplement their meager diets.

The idea that the surviving evidence of the men’s labor was made of kitchen scraps using rudimentary tools, such as nails pried from the planks of the ships on which they were imprisoned, is, to put it bluntly, mind-boggling. But even the humblest of tools can be a precision instrument in the right hands. Many buyers at the time respected the prisoners’ efforts and paid well for their work. Few, if any, of the ships were signed by their makers. Indeed, of the 450 or so bone ship models that have survived to this day, almost none can be traced to identifiable craftsmen.

Some, however, can be traced to specific prisons or hulks. A number of pieces have been traced directly to the prisoners at Welshpool in the years between 1803 and 1814. Many surviving pieces also appear to have come from the first purpose-built prison depot at Norman Cross, Huntingdonshire.

The lack of positive identification is frustrating, but many of the men left clues in the forms of the ships they wrought that hint at biographical details, even when identities are lost to time. As Olivia Williamson, the exhibitions and collections coordinator at the Channel Islands Maritime Museum, told us, each ship is a testament to the harsh life of a professional sailor. “Most of these models were made from memory,” Williamson says, “because it was pretty impossible to get any sort of ships plans while you were in prison.” Despite the reliance on memory, the ships are intricately detailed and regionally specific. It’s supremely unlikely anyone other than someone who worked on a Dutch ketch or fluyt would have the level of knowledge down to the most minute details, to build such a model of one. “So we know,” Williamson says, “that they must have been from these places, and they must have worked on these ships pretty regularly because since they couldn’t get the plans and they are so accurate to life, there’s no other way they could have done it.”

This doesn’t give us a signature, and it doesn’t give us a name, but it does spin a web of story around what is otherwise a fairly anonymous object. The sheer level of intensity and personal intimacy the men felt for their models strikes clearly in one of Williamson’s favorite anecdotes: “One detail that I think is really fascinating is some of these prisoners would choose to stay in prison in order to finish their craft—even if the war was over. There’s one particular instance of a French [revolutionary] prisoner. The war was over, he could have left, but he was too tied to the ship model that he was making. And by the time he was finished with the model, the Napoleonic wars had begun. I guess he thought that the Treaty of Amiens would have lasted longer than it did. Unfortunately, he did not have very much foresight.”

Still, perhaps the fellow might have the last laugh after all. When two whalebone ships came up for auction at Skinner last November, each was estimated to sell for between $4,000 and $6,000. In the end, each brought in a price of some $10,000—which could have bought an inconceivably grand selection of produce for the poor French soldiers back in the day.