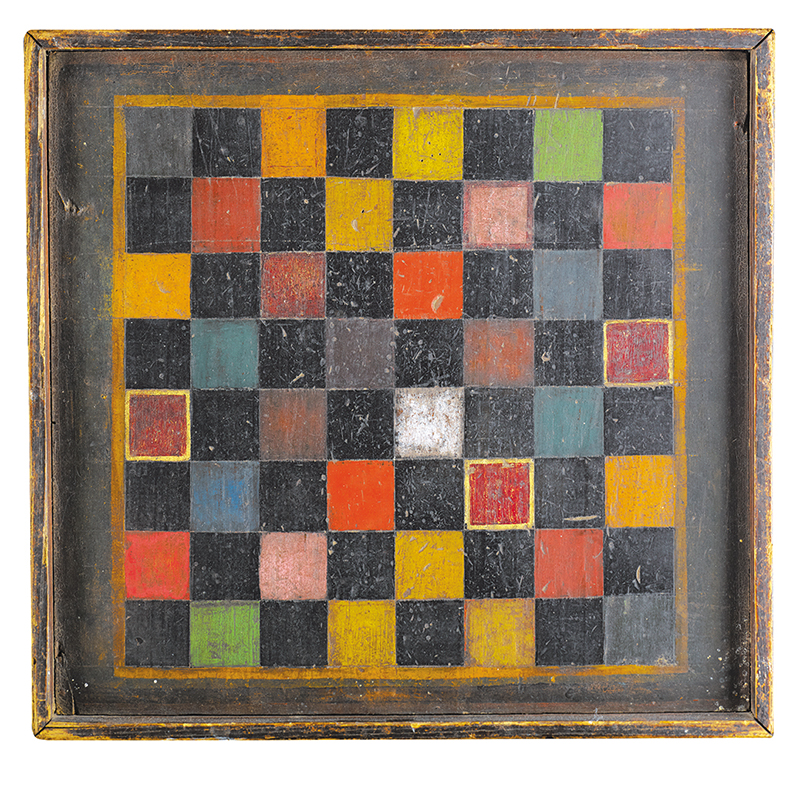 When Warren Battle, co-owner of the art and antiques store Battle Brown in Hudson, New York, saw a polychromatic Parcheesi board for sale at last year’s Delaware Antiques Show, he stopped dead in his tracks. It wasn’t inexpensive, “but it was so beautiful,” he remembers. Hand-painted in vibrant colors, it was a humble yet proud piece made for quiet entertainment. It was a work of art in the way that so much folk Americana is: as a resonant testimonial to a moment, an individual, and a love of play. Battle had to have it.

Upon bringing it back to his shop on Warren Street, Battle took a curatorial approach to displaying the Parcheesi board. When he hung it beneath an abstract painting from the 1950s, both came alive. “The colors were gorgeous together, mixing art from one hundred years apart,” he says.

Board games have been a part of human socializing since the earliest days of civilization. Game boards turn up often in archaeological digs of highly complex ancient societies. Egyptians played a game called Senet that dates to around 2620 bc, and was played well into the Roman period. Similarly, the Royal Game of Ur appears in archeological records as early as 2600 bc in Mesopotamia. That game can be played today thanks to the efforts of British Museum curator Irving Finkel. In the 1980s Finkel reconstructed the game’s rules by translating a Babylonian clay tablet that detailed how it was played. That Senet and the Royal Game of Ur both developed in areas where societies had also developed written language is telling, and speaks to just how important leisure, abundance, and intellectual activity factor into the development of artistic and creative endeavors.

As well as functional objects, many game boards are also objects of artistry and decoration that can speak to the time and place of their maker. Just as a game board made in the Midwest of the United States in the 1940s may be expected to depict symbols of wartime patriotism, so too will ancient extant examples speak to the concerns and daily lives of the board’s maker and users. Many game boards dating back to the Bronze Age have been found carved with scenes of war chariots, men locked in combat, and large animals fighting. That scenes of combat so frequently appear on game boards may reflect a perceived connection between real world combat and the contest between the players.

Other decorative elements appear to have enjoyed a continuity of use from ancient games to modern times, though their ritual or spiritual significance has almost entirely been lost over the centuries. The use of the star or rosette provides a fine example. The rosette, a motif omnipresent in the ancient Near East, is the traditional emblem of Inanna/Ishtar, the most important female deity in ancient Mesopotamia. As goddess of war, Inanna/Ishtar oversaw the metaphoric battle of a game, so it makes sense that the rosette was an essential symbol on game boards as early as the third millennium BC. It is interesting, even if merely coincidental, that the most widespread design of the Indian game pachisi—the inspiration for Parcheesi—features stars on the four corners of the gameboard.

For many collectors, the primary appeal of game boards is aesthetic. For Marc Brown, creator of the Arthur children’s book and television series, and a world-renowned collector of folk art—including antique game boards—the beauty he finds in finely wrought examples is ample compensation for their high prices. “I came at game boards with an artist’s eye, and I just fell in love with them,” he says. “I love the variations on a theme; I love the way the paint wears away over time. You know, we come to game boards the way we come to portraits of children: they tell a story. With the surface, with the wear, with where they’ve been.”

Brown adds that, as a person driven by narrative, the tales told by the flourishes, the unexpected, and the personal touches individual makers put into their boards are enthralling and mysterious. “The more unusual the boards, the better,” he says.

Brown has a good feeling about the future of the market for game boards. “The market goes up and down, but I see American folk art on an upward swing now. I think there are younger people coming into the market and they are starting to appreciate these things again.”

Warren Battle found the same thing to be true at his shop in Hudson. Shortly after he hung that nineteenth-century game board beneath the abstract painting from the 1950s, a client came in and bought both, as if they’d always been meant to be together. “It was an exciting moment for me,” he says, and one which confirmed his instincts when it comes to these colorful wood boards.

When Marc and his wife, artist Laurie Krasny Brown, put a portion of their collection up for auction with Sotheby’s in January 2007, many of the game boards sold for impressive sums. A Parcheesi board sold for $33,000 and another sold for $10,500. Almost fifteen years later, the market for these painted folk game boards remains strong. On January 25, 2020, Sotheby’s held “A New Dimension of Tradition,” an auction that focused exclusively on American folk pieces including many antique, handpainted game boards. A number of the game boards far exceeded their estimated prices, with a rare green and black board with a snake motif and a circa 1890 Parcheesi board each realizing $21,250. An “unusual polychrome-painted pine checker gameboard” sold for $27,500. From the main street of Hudson to the Sotheby’s salesroom, evidence shows the market for antique game boards is holding strong, to the joy of checkers and Parcheesi fans everywhere.

BENJAMIN DAVIDSON and PIPPA BIDDLE are the founders of Quittner, a homewares and lighting studio in Germantown, New York.