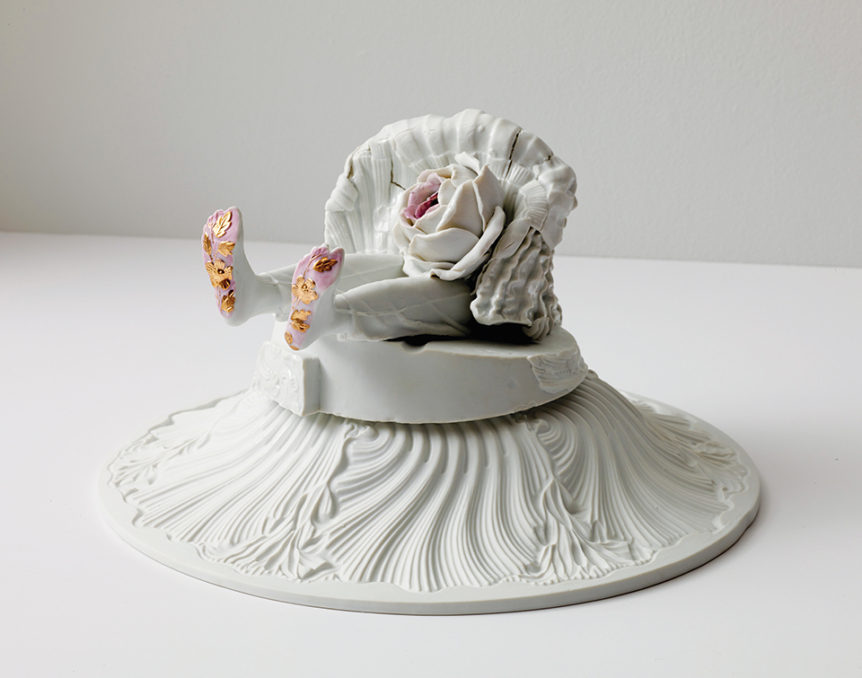 Vitreous, white, and often delicately translucent, porcelain was invented in China as early as the seventh century, but Western attempts to reproduce the Chinese miracle failed until the dawn of the eighteenth century, when the Saxon ruler Augustus the Strong pressed into his service the young Berlin alchemist Johann Friedrich Böttger and commanded him to enrich the Saxon coffers by producing gold from base metals. When Böttger failed at this, Augustus pressed him into porcelain experimentation, as assistant to the eminent philosopher-scientist Ehernfried Walter von Tschirnhaus, who had been conducting research in the field of glass and porcelain since the 1680s.

In 1708 Böttger fused a blend of fire-resistant white kaolin (discovered near Meissen) and a ground feldspathic stone (since called petuntse from the Chinese bi-dun-dzu or China stone) and thereby stumbled on the recipe for hard-paste porcelain like the Chinese.

Determined to monopolize European porcelain production, Augustus established a royal porcelain manufactory at Meissen in 1710. Though the monopoly didn’t last, early Meissen porcelain dominated European ceramics until the discovery of kaolin and petuntse deposits at Saint-Yrieix in France enabled the French Manufacture royale at Sèvres to begin producing hard-paste wares in 1768. Nevertheless, Meissen porcelain has occupied a distinctive place among collectors.

One of the greatest private Meissen collections—tablewares, vases, and figures large and small—was assembled in Dresden between 1926 and 1935 by Heinrich Arnhold (1885–1935) and his wife, Lisa (1890–1972). Though Arnhold died prematurely, by the time the family fled Dresden for Zurich in 1937, and for America in 1940, the collection already comprised 260 objects. On Lisa’s death in 1972, their son, Henry Arnhold, inherited the most important part of the collection, to which his own additions eventually increased the holdings to almost five hundred pieces.

In 2011 Henry Arnhold promised 131 of these objects to the Frick Collection, and a stimulating selection of these constitutes the exhibition Porcelain, No Simple Matter: Arlene Shechet and the Arnhold Collection (on view through April 2, 2017). Organized by the Frick’s curator of decorative arts, Charlotte Vignon, the exhibi- tion was designed by Shechet, a prominent American sculptor, who selected the works from the Arnhold gift to combine with sixteen of more than one hundred hard-paste porcelain sculptures that she executed during a series of residencies at the Meissen factory in 2012 and 2013.

“Arlene and I have very different perspectives,” Vignon says.“She selected pieces from a purely formal and pictorial viewpoint. As an art historian, I am driven by a piece’s importance, the rarity of its form, the quality of its painting, its provenance.” Their complementary approaches have yielded an engaging, seriously informative blend of reverence and iconoclasm. Indeed, those who equate Meissen porcelain with saccharine “Dresden china” figurines are in for a surprise, for this unconventional display reveals early Meissen’s visual power as well as its decora- tive charm. Meissen objects in four wall arrangements are grouped according to color, a custom long out of fashion that recalls the way Augustus the Strong himself originally commanded his porcelains to be displayed.

Shechet often emphasizes the works’ sculptural nature: a tea-leaf-shaped teacup of about 1725 is invert- ed to reveal the beautifully modeled blossoms forming its feet. The cover and stand of a small tureen of about 1735–1745 are parted from the tureen itself, which is overturned to reveal its beautiful enameled decoration and the undersides of its three paw-shaped feet—details that would likely be missed in conventional displays.

Shechet’s novel arrangements of various Meissen figural groups offer new contexts in which to examine them as sculpture in the round. Several are displayed backwards to reveal the verso finish while creating new dialectics between the eighteenth-century pieces and Shechet’s own creations: Johann Joachim Kändler’s Freemason Couple Taking Chocolate (c. 1745) is turned to face Johann Friedrich Eberlein’s Europa and the Bull group (before 1749), the violet-pink of Europa’s drapery carried through the cloak on the verso of the Freemason group, and thence to the sly drapery elements in Shechet’s own Monument with Drapery-Pink (2012), which she created using original Meissen plaster molds. She has humorously positioned the pot-bellied Actor from the Commedia dell’Arte (c. 1725–1730) to face the bulging baluster form central to one of Shechet’s Asian Vase sculptures (2013).

The wonder and brutality of raw nature often inspired early Meissen artists: Kändler’s 1739 Bird, Squirrel, and Stag Beetle on a Tree Trunk is positioned directly above a diminutive saucer of circa 1722 painted in similar colors, showing a hunt scene of hounds attacking a bear. Johann Gottlieb Kirchner’s monumental Great Bustard, preening on a tree stump (modeled 1732), documents one of the heaviest of all flying birds. Its creamy glazed surface with applied porcelain oak leaves and acorn caps bears the firing cracks created when the piece emerged from the kiln around the year Washington and Haydn were born.

Rococo humor informs many of Shechet’s pieces. Saluting, she says, the alchemical search for gold that eventually led to Böttger’s discovery of the porcelain recipe, Shechet fashioned a wall-mounted arrangement of golden mirror glass blocks “to suggest the stone wall of the Frick’s Portico transformed into gold.”Though the delicate but prominent rose in her Dancing Girl with Two Right Feet (2012) suggests an offbeat homage to Michel Fokine’s 1911 ballet Le spectre de la rose, Shechet says that she was “just playing with humor”; the intricate disk that forms the base, Shechet’s porcelain cast of an original Meissen plaster mold, is intended to suggest “how an industrial language overlaps with the language of luxury.”

Asked what concepts she hopes this striking show will impart to visitors, Vignon replies, “We want to engage our public with Meissen porcelain’s abundant wit as well as its wonderful design and stunning decoration. We also want to suggest how imaginatively porcelain was displayed in early eighteenth-century Europe— mounted and grouped in fabulous in- teriors, even integrated into extravagant garden designs.” Illustrating this last point, several twentieth-century casts of early Meissen animals luxuriate in the Frick garden outside.