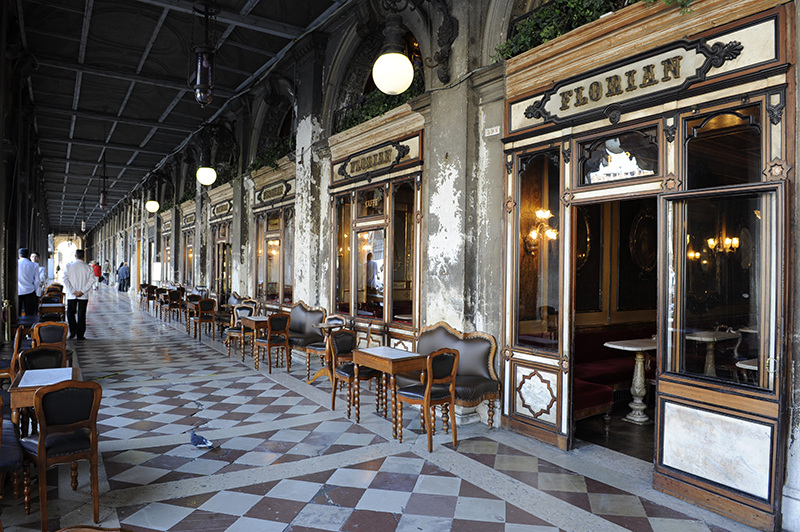 Clearly this annus horribilis of 2020 is no time to celebrate anything, neither the five hundred years since the death of Raphael, nor the 250 since the birth of Beethoven, nor the 150 since the founding of the Metropolitan Museum of Art. Across the cultured world, conferences, exhibitions, and festivals honoring those anniversaries have been canceled beyond recall, and years of planning have gone up in smoke.

Still, out of respect for a saner age, and in hopes of its imminent return, let us take a moment to observe an event that, even under better circumstances, would largely have passed in silence: the three hundredth anniversary of Caffè Florian on the Piazza San Marco in Venice. This establishment can plausibly claim to be one of the oldest continually operating cafés in the world, if not the oldest. It was depicted in the drawings of Canaletto and described in the fiction of Henry James, Oscar Wilde, and Thomas Mann. Wagner and Verdi dined here (although certainly not together), and it was here as well that the revolutionaries of 1848 launched their abortive attempt to overthrow their Austrian invaders: in the resulting conflict, the café became a temporary field hospital for victims of imperial reprisal.

Since the dawn of the age of tourism—and Venice was one of the earliest destinations—Caffè Florian has been an essential stop on the Grand Tour. Even now, in the summer months, it is heavily frequented by tourists, though well-heeled tourists, since its prices tend to discourage the backpacking set. These tourists usually sit outside in the Piazza San Marco itself, listening to one of the café’s two orchestras as it plays its frothy renditions of Rossini or Rodgers and Hammerstein. As for the locals who occupy its interior spaces in the colder seasons, they are apt to be fiercely loyal to the establishment and would never be caught dead in Caffè Lavena or at Quadri, across the Piazza San Marco and founded in 1750 and 1775, respectively, let alone in the upstart Caffè Chioggia, which opened around the corner in the piazzetta only in the nineteenth century. But even the locals come less for the fare—which, by the way, has gotten decidedly better in recent years—than for the experience: in the ancient city of Venice, Caffè Florian, in addition to much else, is a perfectly preserved antique in its own right.

When Floriano Francesconi opened his restaurant on December 29, 1720, he named it Alla Venezia Trionfante, To Venice Triumphant. But the Venetians, from the very beginning, have called it after its founder, and Caffè Florian became its official name in 1797. Although the café has always stood at its present site, it has grown considerably over the centuries. Initially it appears to have occupied only two small rooms—the present vestibule and the Sala Cinese (Chinese Room) to the right—in the Procuratie Nuove, a seventeenth-century extension of Jacopo Sansovino’s sixteenth-century Biblioteca Marciana on the southern side of the piazza. By the time the founder died in 1773, after managing the restaurant for more than half a century, the Sala Orientale and the Sala del Senato had been added to either side of the two original rooms. The café remained in the family until 1858, when new owners hired the local artist and architect Ludovico Cadorin to reconceive the establishment in the mid-century historicist manner that we see today, a monument of Italian interior design in the age of the Risorgimento. The café finally expanded to its present size in 1872 with the addition of the Sale delle Stagioni and degli Uomini Illustri (The Rooms of the Seasons and of Great Men). In 1920, on the two-hundredth anniversary of the founding of Caffè Florian, one final room, the Sala Liberty, was added in the back in the art nouveau style.

Because of these modifications, and despite its eighteenth- century roots, Florian’s as we know it today is a nineteenth-century monument. If it retains some flavor of the century before, that is only because, in reimagining it, Cadorin was inspired by an essentially nineteenth-century dream of eighteenth-century Venice. The very signage over the entrances at ground level is conceived in the delightfully, ponderously serifed letters of the age of the Risorgimento.

As with so much mid-nineteenth-century design, Cadorin sought to lead the visitor through an exotic sequence of lands and ages. Amid white marble tabletops and red velvet divans, he reconceived the Sala Cinese—really more Persian than Chinese—as a series of puce and lavender arabesques set into gilded frames containing images of couples in Chinese and Arabic attire, the work of the painter Antonio Pascutti. The Sala Orientale is even more overtly Orientalist, its ceiling decked out in the abstract geometric patterns of Ottoman architecture, while each of the gilded frames along the walls reveals a woman in some state of deshabille. Those paintings are the charming works of Giacomo Casa. In addition to creating several of the murals in the nearby Teatro La Fenice, Casa adorned the café’s Sala del Senato with The Age of the Enlightenment, or Progress (Il Secolo illuminato), a work that invokes Masonic symbolism, and with Civilization Educating the Nations. Perhaps the most Venetian of all the rooms, insofar as its decor recalls the city’s eighteenth-century interiors, is the Sala degli Uomini Illustri. Here, along richly appointed burgundy walls are the portraits of ten famous Venetians of centuries past: among them Marco Polo, Titian, and Palladio, as well as a number of early doges.

One of the most radical changes to Florian’s, however, is something that, from an urbanistic perspective, is apt to be overlooked: the establishment of outdoor seating, which seems to have been formally instituted only in the twentieth century. From the comfort of the several hundred modernist chairs that extend into the square, there is perhaps no better place to appreciate the piazza, which Napoleon Bonaparte is famously said to have called le plus elegant salon d’Europe, the most elegant drawing room in Europe.

At the time of this writing, the world is experiencing a period of troubling upheaval and urgent threats to our very health. It is a time in which the archaic amenity of a rococo café, three centuries old, might seem a thing of frivolous, if not ludicrous, inconsequence. But Caffè Florian embodies a deeply philosophical refutation of any such assertions. In addition to representing the claims of civilization and civility itself, the café stands as the end to which social agitation is essentially the means. For all the social agitation that has ever existed has been undertaken to establish not only the conditions in which human beings can survive, but also the conditions under which they might aspire to a more elevated and beautiful state than mere subsistence. Caffè Florian, like so much of the ancient city of Venice, is the embodiment of that elevation and that beauty.