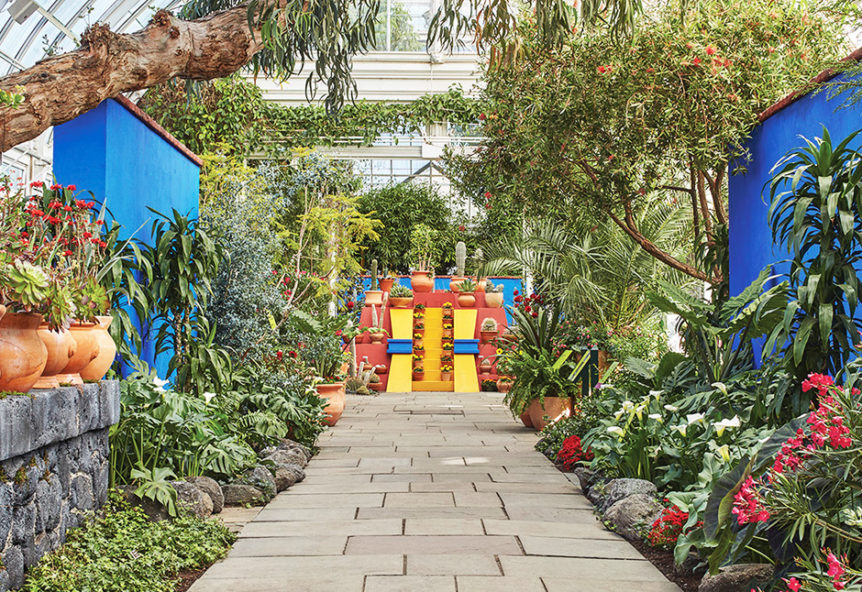 After decades of lionization, what more could there be to say about Frida Kahlo? A great deal, as a visit to Frida Kahlo: Art, Garden, Life, the new exhibition at the New York Botanical Garden, proves. All it took was a fresh perspective and a unique team of talents.

Born in 1907, Kahlo was, along with her husband, fellow painter Diego Rivera, a leading light of Mexico’s twentieth-century cultural renaissance. Her artistic output was small; only about 250 examples of her work exist, with fifty or so self-portraits forming the core of her oeuvre. In part because of her staunchly Communist politics, as well as her reluctance to leave her home in a Mexico City suburb, Kahlo never enjoyed, at least in the United States, the popular recognition her work merited before her death in 1954. Rediscovered as a feminist icon in the 1980s, she has since been the subject of dozens of biographies and endless merchandizing with “Frida” tee shirts and hoodies, coloring books and paper dolls, earrings, even temporary tattoos. Having been rescued from obscurity, Kahlo now runs the danger of subsiding into a cult caricature.

Making yourself heard amid such static is challenging even for a scholar such as Adriana Zavala, professor of Latin American art history at Tufts University. That’s why Zavala was enthusiastic when approached to curate a new kind of Frida Kahlo exhibition by the New York Botanical Garden. What had been a professional liability for Kahlo, her homebody inclination, was turned into an asset and a focal point: the exhibition, housed in the garden’s Enid A. Haupt Conservatory, would evoke the garden of Kahlo’s “Blue House” (Casa Azul), the place where she best expressed herself, and link this to a choice selection of Kahlo’s art displayed in the gallery attached to the botanical garden’s library.

Even for Zavala, this was new territory. Although she had studied Kahlo in depth, she hadn’t, she admits, thought about “the very careful engagement with the natural world” demonstrated in her art. A team was assembled, including, in addition to Zavala, horticulturists and exhibition specialists from the botanical garden and Tony Award–winning scenic designer Scott Pask. The inclusion of a scenic designer was significant: Kahlo’s garden was a retreat but also a stage on which she could perform for social gatherings wearing her Mexican folk dress and pre-Columbian jewelry. It was also an artistic resource in that it provided a home for the flora that played such a prominent role in her painting.

The importance of the garden and its flora to Kahlo can be understood by examining the fourteen works in the gallery part of the exhibition. Paintings in a surrealist vein show figures literally rooted in the soil; in a pencil drawing of 1932, The Dream (Fig. 6), the hair of a sleeping figure (presumably a self-portrait) tumbles down from the bed to penetrate and branch in the ground below.

“I paint self-portraits,” Kahlo famously remarked, “because I am so often alone, because I am the person I know best.” Included in this exhibition are a painting of Kahlo’s face framed in a sunflower blossom, a native Mexican plant (Fig. 7), and her Self-Portrait with Thorn Necklace and Hummingbird in which she stands, her neck enveloped in brambles, before a screen of subtropical foliage echoing the elephant-ear plants that still grow in the courtyard of the Casa Azul (Fig. 12).

Evocative vignettes are also the heart of the display that Pask and the NYBG horticulturists created in the botanical garden’s conservatory. This display, Pask says, is not a re-creation. Indeed, although the design and interpretation team spent a week in Mexico exploring the Casa Azul (which has been preserved as the Museo Frida Kahlo) and the other scenes of Kahlo’s life and work, they found that the garden has changed character since Kahlo’s death, with shadier foliage and lush plants replacing the spare succulents that predominated during the artist’s life. Archival photographs bear witness to the change. Still, important details survive and have found their way into the NYBG conservatory.

“What you try to do,” Pask explains, “is have moments of the essence of it.” Unlike a stage set, which is designed to be viewed within a single frame, Pask choreographed the NYBG planting as a progression of experiences, using architectural elements to compress the flow, with more open spaces in between: walls the color of indigo—Kahlo actually used pigment from a native species of this plant in the paint on her house; stands of cacti and subtropical flowers and foliages; a fountain copied from the one that bubbles outside the window of Kahlo’s studio; a bench; and, finally, in a small rotunda a lavish display of Mexican terra-cotta pots on a pyramid just like the one that Rivera built in the Casa Azul courtyard as a showcase for his extraordinary collection of pre-Columbian art.

Pask speaks of the pleasures of working in collaboration with such horticulturists as Francisca Coelho, vice president for glasshouses, who supplied and arranged the flowers and hence the colors and textures for his procession. Zavala also speaks of what she gained from collaboration. One painting in the exhibition, for example, the Flower of Life (Fig. 10), has been habitually interpreted by art historians as picturing a mandrake plant, a symbol of Kahlo’s preoccupation with her own infertility. Coelho, however, identified the pictured plant as an amalgam of a red trumpet flower blossom—a plant that still grows in the Casa Azul garden—with poinsettia leaves. Poinsettias are a popular and native Mexican garden flower, and the red angel trumpet was a powerful folk remedy for pain, familiar undoubtedly to Kahlo who suffered severely as a result of a traffic accident as a teenager.

As an art historian, Zavala says, she has been trained to look at art very closely. But this exhibition taught her to look with yet another set of eyes. Fresh eyes for a different and wonderfully fresh Frida Kahlo. Frida Kahlo: Art, Garden, Life is on view at the New York Botanical Garden until November 1.

TOM CHRISTOPHER has written on gardens for numerous publications. He is also the author of the book In Search of Lost Roses.