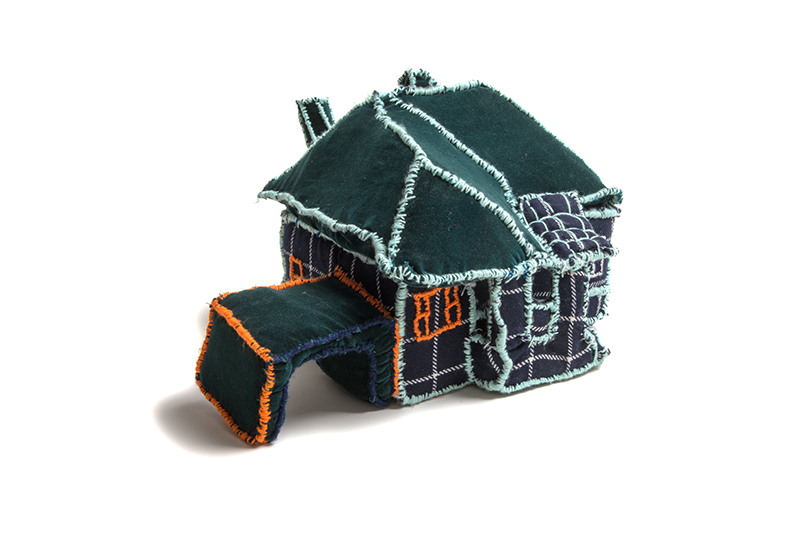 This week The Magazine ANTIQUES paid a visit to OAF (January 16–19), the only fair of its kind to exhibit the work of outsider artists exclusively. Here are some highlights:

Arts Project Australia, a studio and advocacy group for mentally challenged artists, partnered with Dutton to feature the work of Chris O’Brien at the gallery’s booth this year. Though he’s in his mid-thirties, due to a learning disability O’Brien must live at home with his dad. O’Brien’s guiding fantasy is to one day be able to live outside the family home, in a relationship with someone else, a desire he processes by making houses out of fabric that he finds or that people give to him. To conceptually support the sculptural work, the artist also makes zines and short films.

Integral to the history of art brut (the European antecedent to what we in the States call outsider art) are the Artists of Gugging, a group of mentally or developmentally challenged artists who since 1981 have constellated at the House of Artists, on the grounds of the former Maria Gugging Psychiatric Clinic near Vienna. Over the past forty years their well-publicized activities have given rise to a gallery—through which the artists sell their work—a studio open to the public, and the Museum Gugging, which launched in 2006.

Gugging Artist August Walla was being shown by Galerie Gugging. Born in 1936, Walla’s artistic practice early on consisted in painting trees, buildings, and other elements of the natural and built environment with words from his personal language, then photographing them. “It was like street art,” says Irina Katnik. “He wanted to create his own world.” Moving into the House of Artists in 1983, Walla started drawing city- and townscapes, which he continued to do until his death in 2001.

Next door, Ricco/Maresca Gallery had brought the work of another Gugging Artist, Leopold Strobl, whose métier was clipping photographs from newspapers and coloring over them with a palette of yellows, green, and black (and sometimes red). Often, a dark obelisk-like form squats ominously in the middle of the compositions, which are small enough to recall hand-colored postcards from the early twentieth century.

Purvis Young was inspired by Northern murals like Chicago’s 1967 Wall of Respect, which depicted black cultural figures like Gwendolyn Brooks and Malcolm X and was destroyed in 1971. He took up a brush and started painting on wood he’d scavenged from shipping crates, hanging his work on the boarded up storefronts lining an alley in Miami’s Overton neighborhood. He named the place Goodbread Alley, and as word spread it would be overrun by tourists, some of whom bought pieces right off the wall. In the paintings at Hirschl & Adler Modern, haloed figures and herds of wild horses—two of Young’s favorite themes—cavort. “I just paint good people,” the artist told the Souls Grown Deep foundation in the mid nineties, “I don’t know what happens to the bad ones.”

Manchester-based gallery Jennifer Lauren is showing the work of Mokoto Okawa, a Japanese soft sculptor and member, until his death in 2016, of Atelier Corners, an art studio that supports self-taught artists with disabilities. Okawa is best known for his colorful, hand-felted “Makoot” dolls. Possibly representing the artist’s alter egos, they reflect Okawa’s emotional state at the time of making. “If he’s feeling happy the dolls will have a softer appearance; if unhappy, they’ll be harsh-looking,” gallery proprietor Jennifer Gilbert explains.

At Carl Hammer Gallery, a trio of Joseph Yoakum’s highly recognizable landscapes were on display. Yoakum pressed gently on his colored pencils and pastels, rendering the folding, dappled, and hatched formations of the landscapes in watery tints of green, orange, red, and blue. He claimed that the fantastical places he drew—which look something like tissue cross-sections from a medical textbook—were real places he’d visited during a life that took him from Arizona to Siberia, and part of which was spent working as a circus handyman for the Ringling Bros. and with Buffalo Bill’s Wild West. Living out his final years in Chicago, between 1965 and 1970 Yoakum produced on average one drawing a day, many carefully rubber stamped with the day’s date.

An art practiced in China for eons found an able disciple on these shores in the nineteenth century: the (self-proclaimed) “Prof. Al Gimbi, Pennsylvania Peach Stone Carver.” Capitalizing on peach stones’ veritable absence of grain, which would turn a knife or chisel, carvers are able to knock out virtuosic scenes that belie the tininess of their canvas. A. W. (Albert William) Gimbi, a barber by vocation in McAdoo, Pennsylvania, carved hundreds of minute shoes, brushes, baskets, books, and sewing accoutrements, many of which are on display in all their hairsplitting glory in Marion Harris’s gallery.

Though nestled in a remote crook of the Alabama River, the quilters of Gee’s Bend, Alabama, were in fact not as cut off from civilization as their legend would seem to imply . . . at least not by the second half of the twentieth century. In 1972 Sears, Roebuck, and Company contracted the community’s Freedom Quilting Bee to make seat cushion covers out of wide-wale corduroy, and the leftover fabric from the job was appropriated to make quilts, like the striking example in green and orange by Mary L. Bennett in One Mile Gallery’s booth.

Steve Powers’s newest discovery was hung to showstopping effect on the exterior wall of his booth. Called Variations of the Cross, it comprises more than one hundred categories of crosses, drawn in black ink on 8 by 10 1/2–inch paper. Their origins and types—“Santa Clara Rosario of Spanish origin,” “1st Methodist Church of Glendale California,” “Fylfot Cross”—were carefully jotted down apposite, as if they were botanical specimens. Powers knows very little about who Mrs. George Dunham—the crosses’ creator—was or where she lived. All the information he has comes from a single newspaper clipping, which shows the artist, described as a “Methodist preacher’s wife,” standing next to her work in 1963.