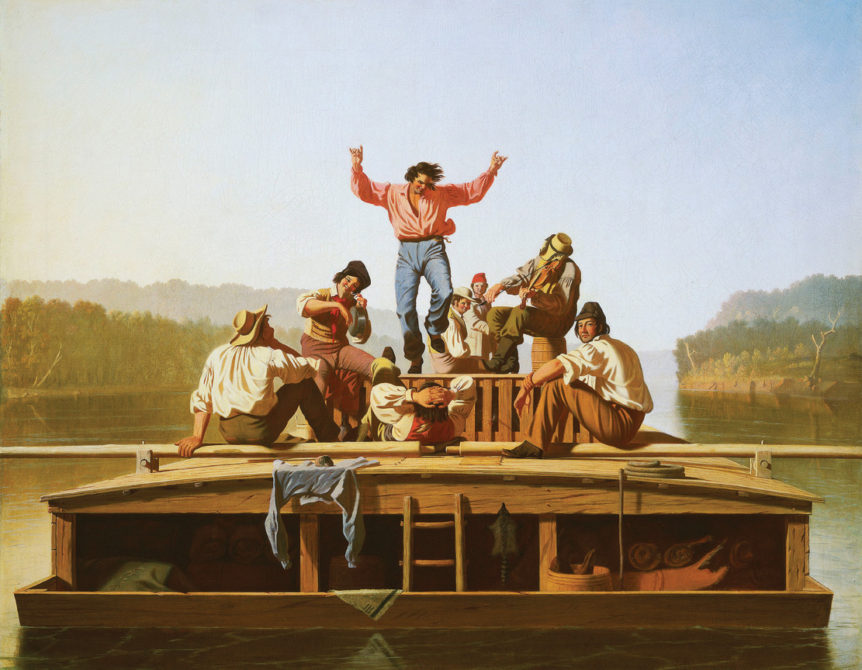 “There has never been another artist like George Caleb Bingham”

Before the middle of the nineteenth century, most American artists were “outsider” artists, in the sense that these denizens of the New World stood outside the European artistic mainstream and desperately wanted to get in. As a result, their work, with its often wobbly one-point perspective and slightly odd chromatic registers, tends to betray the inadvertencies of the autodidact. There were surely exceptions such as Gilbert Stuart and, in the mid-eighteenth century, Benjamin West and John Singleton Copley, who moved to England and were accepted as fully-fledged members of the mainstream, their art having become largely indistinguishable from that of their European contemporaries. But although the Pennsylvania Academy of the Fine Arts was founded in 1805 and the National Academy of Design in 1825, it would be decades before either institution succeeded in purging the provincialism from the work of its members.

Sometimes, however, a native and irrepressible artistic gift manifested itself before or in spite of any formal training, and that is surely the case with the subject of Navigating the West: George Caleb Bingham and the River, now on view at the Metropolitan Museum of Art.

Bingham spent much of his career in Saint Louis, where, in addition to prospering as a portraitist, he served in the Missouri House of Representatives in 1848 and thereafter held several state political appointments. Like most artists of the early republic, he learned his craft mainly from copying such engravings and pattern books as came his way. In time he passed through the Academy of the Fine Arts in Philadelphia and the National Academy in New York, and even lived in France and Germany between 1856 and 1859. But his enduring importance consists in his imperfect assimilation of the art that he encountered in the various museums and academies of Europe and North America.

Simply put, there has never been another artist like Bingham: his best work is instantly identifiable as the product of his hand and is unlike anything done by other artists. This uniqueness is evident in his exhilarating depictions of American democracy at work in The County Election, Stump Speaking (Fig. 3), and The Verdict of the People from the early 1850s, as well as in those river scenes-mostly completed between 1845 and 1856, before he left for Europe-that are the focus of the show at the Metropolitan.

There are three main qualities that distinguish Bingham’s art. The viewer is immediately struck by what at first glance appears to be an almost photographic quality, evident in Boatmen on the Missouri (Fig. 2), where the brilliant light of late afternoon hovers over the three men symmetrically placed on a barge loaded with firewood. That symmetry is re-created in Raftsmen Playing Cards (Fig. 4), in which two card players and onlookers form the sort of precisely geometric composition, in this case circular, that Bingham favored throughout his career and that he learned from studying engraved reproductions of the old masters. In the background, a punter propels the raft down the river with that stillness-within-exertion that brings to mind the third benchmark of the artist: an almost metaphysical serenity. Few American painters of his day could match the deep, probing stasis of this painting or of Watching the Cargo (Fig. 5), in which a man sits beside his wares as he tugs meditatively at a clay pipe, while one of his companions slouches against a barrel and another tries to get a fire going. In the background a becalmed riverboat, listing to larboard, completes this impression of enervated peace.

Like so many American artists of his time, Bingham was not trying especially hard to be an American artist, except perhaps in the sense that certain of his themes, like those of many compatriots, were local in nature and, being American, were thus new to art. Rather, he aspired to do what European artists were doing. Specifically he was a painter of genre scenes, glimpses of anonymous, everyday life. And yet, there is no real European (or American) precedent for his depictions of life on the Mississippi. Surely there is a long tradition of port scenes like those of Jan Baptist Weenix in Holland and Salvator Rosa in Naples. The most important formal precedents, perhaps, are the tavern and village scenes of Dutch artists such as Isack and Adriaen van Ostade (see Fig. 6), but transposed by Bingham to boats on a river.

The figures he paints in these river scenes are presumably the same characters whom a contemporary, T. B. Thorpe, pungently described as “professional men of all creeds and characters-Wolvereens, Suckers, Hoosiers, Buckeyes, and Corncrackers, besides a ‘plentiful sprinkling’ of the half-horse and half-alligator species of men, who are peculiar to ‘old Mississippi.'”* But in Bingham’s depictions of these men-and they are all men-there is nothing rakish or common or base. Despite their humble callings and the occasional torn garment, the figures in The Jolly Flatboatmen (Fig. 1) appear to be singularly well kempt and well behaved, bathed as they are in the purifying noontide light that floods so many of Bingham’s works. Likewise, there is something of neoclassical, almost Poussin-esque, serenity in the perfectly equilibrated figures of Raftsmen Playing Cards. In these and, indeed, in all of Bingham’s works, barely a ripple or the splash of an oar disturbs the otherworldly calm of the Mississippi or the Missouri, which flows into it near Saint Louis.

If there is something idiosyncratic about Bingham’s choice of subject matter, the same can be said for the manner in which he has depicted it. Consider how different these images would be if Bingham had been a better pupil and had assimilated more fully the examples of his European sources. He would have known that genre scenes were supposed to be lighthearted and comical, rather than exhibiting the almost opiated introspection of Fur Traders Descending the Missouri (Fig. 7). Nor is there any place in traditional genre scenes for the sharp chiaroscuro that defines the figures in Boatmen on the Missouri. And the almost excessively precise pyramidal composition of Lighter Relieving a Steamboat Aground (Fig. 8) was, in traditional European practice, virtually the exclusive preserve of religious compositions from the sixteenth century.

But Bingham appears to understand none of that, and therein lies his greatness. The present exhibition, understandably and defensibly, chooses to view the art in the context of contemporary American history and concentrates on what it tells us about the multitudinous life on the Mississippi. But something far deeper and far more interesting is taking place in these paintings. Like the frères Le Nain in seventeenth-century France, Bingham has transformed the genre scene into a work of probing, meditative quiet. Even when the Jolly Flatboatman dances his ecstatic hornpipe, there is stillness. Even as his companions play their music, there is silence. Whether amid the blaze of daylight or at the onset of evening, there is something of radical, nocturnal inwardness in these men who ply the waters of the river. For the Mississippi, like the Nile, is not merely a conduit of commerce, a means of conveyance from one destination to another: in the serene, misty, indeterminate loveliness of Bingham’s depictions of it, the river becomes a thing of transcendent ancientness, a way of life and life itself.

Navigating the West: George Caleb Bingham and the River was organized by the Amon Carter Museum of American Art in Fort Worth, Texas, and the Saint Louis Art Museum. It is on view at the Metropolitan Museum of Art to September 20.