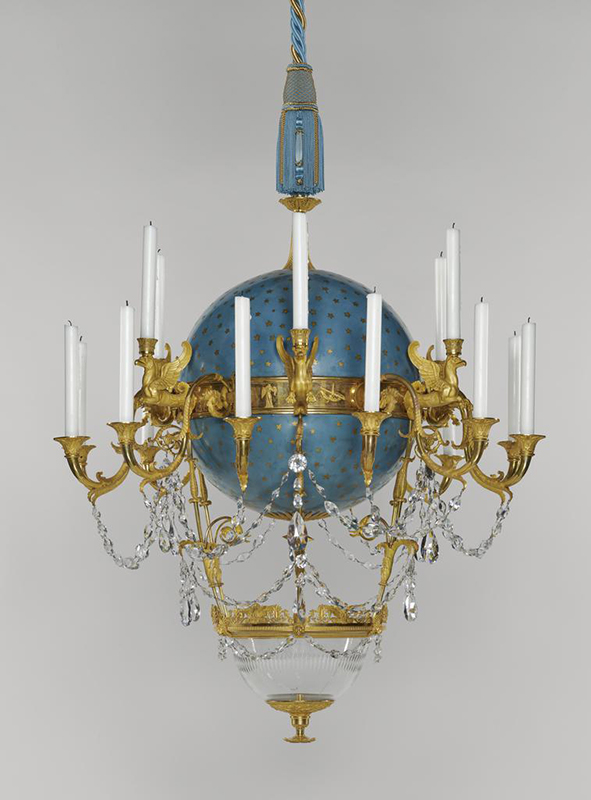 As one of the most popular objects at the J. Paul Getty Museum, the Galle Chandelier became the subject of its own exhibition…last year. But, have no fear for the show,  The Galle Chandelier, has finally migrated online so that art lovers can revel in its beauty from the comfort of home. Made in the early 19th century by French bronze caster Gérard Jean Galle, the chandelier boasts several unique features, including an attachment designed to hold the family goldfish. Bringing together ancient motifs and modern miracles, this exhibition is certainly must-see.

The home to MFA Houston’s collection of decorative arts, the mansion-museum dubbed Rienzi is the former home of Houston philanthropists Carroll Sterling Masterson and Harris Masterson III. Some of our favorite pieces to be found there are part of a massive collection of objets d’art and jewelry, collected by the Masterson’s themselves. This collection can be seen online through the exhibition Extravagant Objects: Jewelry and Objets d’Art from the Masterson Collection. With its finger-shaped pipe tamper, antique étuis, and bejeweled pendants, this eclectic collection promises to please anyone who visits.

The city of Detroit was home to Frida Kahlo while she painted some of her most significant works so, it would only make sense that they honor her with an exhibition. Frida Kahlo in Detroit traces a timeline of her year in Detroit beginning with her arrival in 1932 with her husband, Diego Rivera, and following her through periods of grief and recovery. This exhibition is a must-see for anyone who wishes to know more about the artist behind some of the most influential artworks of the 20th-century.

As London enters a third week of lockdown, we remind ourselves of the cultural beauties that will again be available on the other side of the present crisis. The online exhibition Traditional Jewellery and Dress from the Balkans offers an inside look at the British Museum’s collection of jewelry and costumes from Central Europe. Many of the objects in this exhibition come from the period during and immediately following the fall of the Ottoman Empire. This exhibition hosts a diverse range of clothing styles that were crafted following the re-emergence of distinct regional identities. From detailed embroidery to the usage of different metals and stones, the apparel in this unmissable exhibition reveals the richness of Balkan cultural identity.

Although MFA Boston is temporarily closed, that doesn’t mean that we can’t enjoy what the museum has to offer from home. The exhibition 20th Century Designer Fashion highlights pieces from the “coming of age” of fashion, the era that redefined fashion for the modern age. From form-fitting evening gowns studded with gems and pearls to loose, workable and wearable eccentrically patterned dresses, this exhibition illustrates the accelerated evolution of style that took place in the last century—a fashion evolution that began with puff sleeves and ended with grunge.

And because we miss walking the halls of MFA Boston so much, we must share this second online exhibition with all of our loyal readers. Conservation in Action: Preserving Fans at the MFA Boston takes a look into the restoration process. The Textile and Fashion Arts collection at MFA Boston requires an incredible amount of upkeep, something that allows us museumgoers to continue to fawn over the incredible pieces. This exhibition allows us to not only learn about the conservation of fans in the museum’s collection but also offers a close look at some of the most intricate pieces on view. So, make sure to take advantage of this opportunity.