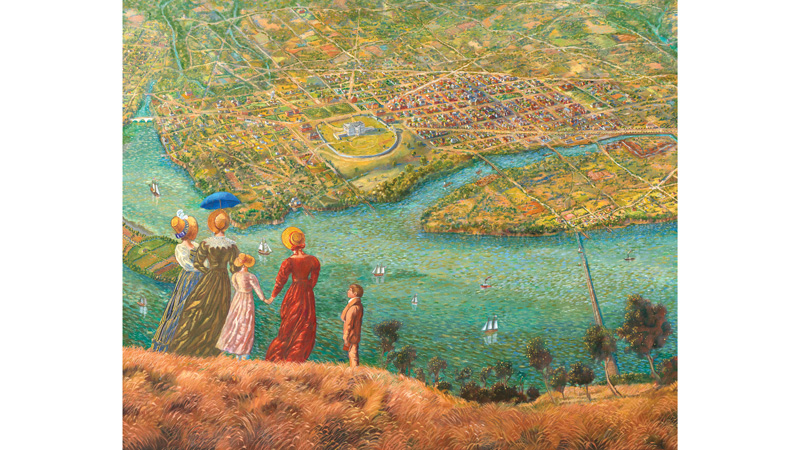 Unrealized designs of monuments, bridges, and other structures in Washington D.C. tell the story of a city that might have been. Peter Waddell’s imagined panoramic landscape—which depicts the capital as a sort of mammoth village—are particularly amusing. museum.gwu.edu

Songs of the Civil War at the Textile Museum, George Washington University, to December 22

Through a combination of historical sheet music and contemporary recordings by Washington Revels Heritage Voices, this exhibition aims to tell the stories of the Civil War. Five John Philip Sousa compositions – on themes of patriotism, sorrow, information, conscription, and war marches – are the vehicle to tell the emotional story of American life during the conflict. museum.gwu.edu

Embroidery, ceramics, and jewelry created by mid-century American artists are on display, with a focus on the union of avant-garde abstraction and functional form. Highlighted artists include textile makers Mariska Karasz and Gloria Balder Katzenberg, potters Getrud and Otto Natzler, and jewelry designer Betty Cooke. artbma.org

A Venturesome Spirit: Louis Magaziner in 20th Century Architecture at the Athenaeum of Philadelphia, to December 20

The buildings of Louis Magaziner embodied the evolution of architecture in the twentieth century, from the arts and crafts style to sleek modernism. His work, as well as some work by his contemporary and friend Julian F. Abele, is examined as it relates to the city of Philadelphia. philaathenaeum.org