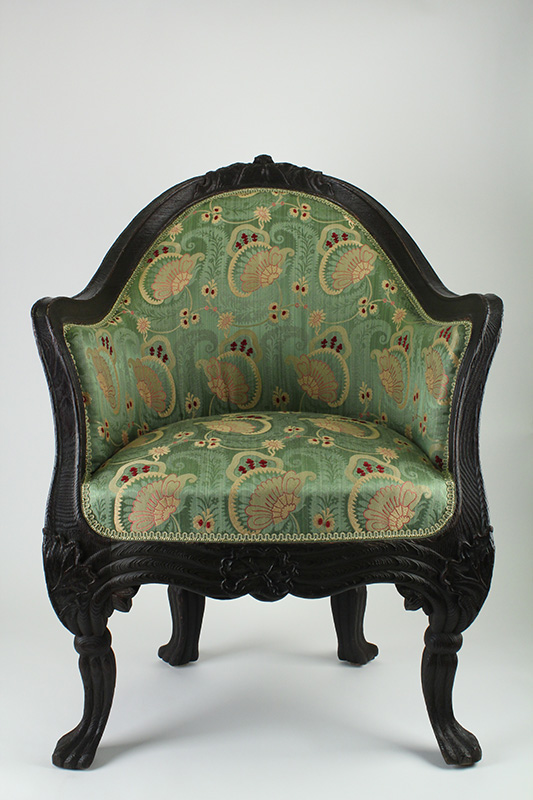 The Philadelphian painter of rocky coasts and roiling waves gets his first retrospective in Boston, which features his earliest sketches as well as the later-career watercolors that Richards began churning out after the medium gained popularity in the mid-nineteenth century. bc.edu

Architectural Annotations at the DePaul Art Museum, September 12 to February 23, 2020

Architectural drawings by the Burnham Brothers, Douglas Garofalo, and Giovanni Battista Piranesi, as well as sketches for contemporary US composer Andrew Norman’s The Companion Guide to Rome suite of musical “portraits,” have been curated by artist Julia Fish, demonstrating the different ways in which artists are inspired by historic buildings. depaul.edu

Barn Star Productions is producing this year’s edition of the antiques show in Blue Mountain Lake, NY, which benefits the Adirondack Experience—The Museum on Blue Mountain Lake through the sale of painted furniture, estate jewelry, fine and folk art, porcelain, smalls, and much more. theadkx.org

Celebrating Heroes: American Mural Studies of the 1930s and 1940s from the Steven and Susan Hirsch Collection at the Georgia Museum of Art, University of Georgia, to September 15

With the US government splurging on civic projects in the 1930s, it was peachy to be a muralist. That is, if you were lucky enough to nab a commission. In this exhibition organized by the Frances Lehman Loeb Art Center at Vassar College, almost fifty sketches—many from Woodstock, NY, whose arts association celebrates its one hundredth anniversary this year—are on display, some of which represent the beginnings for enormous projects . . . others which, sadly, memorialize the end of the road. georgiamuseum.org

Have a Seat: A Survey of American Chairs at the Columbus Museum of Art, opens September 15

From a carved walnut armchair made by J. W. Meeks for a New York library in 1850 to the 2008 Bilge lounge of Brooklyn-based firm UHURU, this exhibition maps the development of seating through some ten examples. columbusmuseum.com

The Idea of America in 19th-Century Japanese Prints at the Art Institute of Chicago, to September 15

Following first contact between two nations, respective peoples often will attempt to understand the strange customs and characteristics of their new associates by relying on their imaginations. Such a process taking place in Japan after the landing of Commodore Perry led to a genre of prints called Yokohama-e: commercial images of the Westerners. History became legend, legend became myth, and by a strange process of miscommunication, some of these fanciful imaginings began to be reported as fact, entrancing and amusing natives and visitors alike. artic.edu

From Bauhaus to Black Mountain College to Hyde Collection, to September 15

Many Bauhäuslers emigrated to the United States after conditions in Germany became too retrograde for their radical art and design. A number of them, including Josef Albers and Wassily Kandinsky, whose work is on view, helped establish a foothold in the New World at Black Mountain College in North Carolina. hydecollection.org

Walt Whitman: Bard of Democracy at the Morgan Library and Museum, to September 15

Whitman, thanks in part to the “portrait of the artist as a gay man”–style encomiums he’s been receiving on the occasion of his two hundredth birthday, is hot right now. This exhibition displays his notebooks and his portraitist’s copy of Leaves of Grass, as well as letters from notables from Emerson to Ginsberg, drawing on material at the Morgan and the Library of Congress. themorgan.org

L’Affichomania: The Passion for French Posters at the Taft Museum of Art, to September 14

A quintet of Jules Chéret, Eugène Grasset, Théophile-Alexandre Steinlen, Alphonse Mucha, and Henri de Toulouse-Lautrec flash their wares (posthumously) at this Driehaus-organized exhibition of posters that will travel to the Vero Beach Museum of Art following its close this weekend. taftmuseum.org

Organized by the Brandywine River Museum of Art and the Portland Museum, New Perspectives is billed as the first exhibition to examine the illustrator’s entire output, which includes landscapes, seascapes, portraits, still lifes, murals, and narrative and advertising images, through some seventy paintings and drawings. brandywine.org

Monet: The Late Years at the Kimbell Art Museum, to September 15

Monet sensed which way the wind was blowing in 1913, and for the rest of his life pursued an increasingly abstract style in keeping with modernist preferences. The Late Years is the first exhibition in more than twenty years to be dedicated to the final phase of the great impressionist’s career. kimbellart.org

Andy Warhol: Portraits at the McNay Art Museum, to September 15

Like John Singleton Copley, Gilbert Stuart, and Charles Willson Peale before him, Warhol depicted the luminaries surrounding him in the northeast metropolises both out of necessity and as an advertisement for his own mondaine existence. Over 120 paintings, prints, photographs, and films are on view. mcnayart.org

Village Enlightenment: Print Culture in Rural Vermont, 1810–1860 at the Bennington Museum, to September 15

Control of the means of production may be the subject to which all Marxists advert, but controlling the means of disseminating information is arguably the more important one. That information is power wasn’t lost on the printers toiling in Windsor County, Vermont, in the 1800s, whose engravings, maps, and books for the people are on view in a small but fascinating exhibition. benningtonmuseum.org