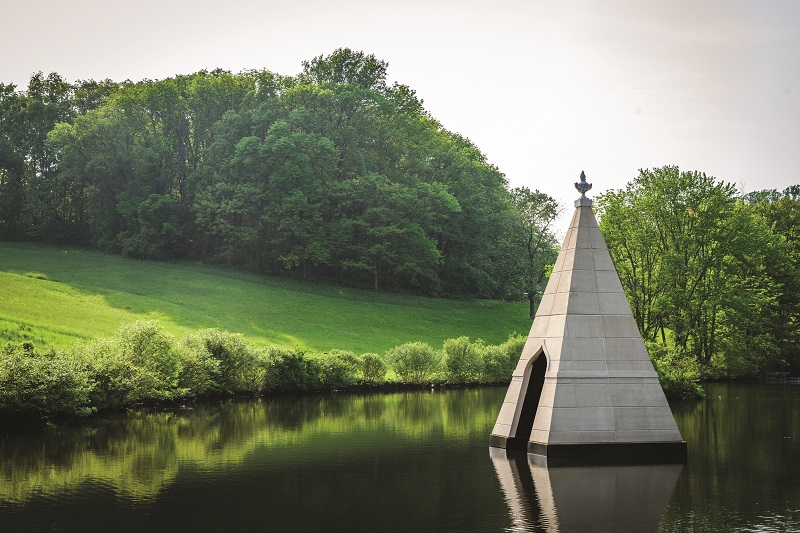 Winterthur’s first garden folly was a wooden lattice-sided pavilion that Henry Francis du Pont (1880–1969) purchased in 1929, along with other decorative structures, from the grounds of a nearby early nineteenth-century estate, which had become dilapidated and would be razed within a few years. He would go on to install five more, all of them architectural rescues and reconstructions. This year, for the first time since the 1960s, new follies have appeared in the Winterthur landscape—seven of them, as part of the exhibition Follies: Architectural Whimsy in the Garden, which will be on view until January 2020.

Historically, follies had their heyday in Europe during the eighteenth and nineteenth centuries. While these structures could serve a useful purpose, their main function was to create a romantic aesthetic in the garden, as ornaments in the landscape. Follies based on Greek and Roman architecture were most popular, and regarded as symbols of virtue. Others, particularly picturesque ruinous examples, were modeled on the idyllic landscape paintings of artists such as Claude Lorrain.

All but one of the new follies at Winterthur were inspired,directly and indirectly, by a group of historic follies in England. The exhibition was originally conceived by our garden director, Chris Strand, when he was working on the Costumes of Downton Abbey show, which debuted at Winterthur in 2014. The following year, a colleague and I traveled to Britain and visited sixteen great estates. A list of folly styles and models was whittled down to seven, and the final designs were a joint effort among Winterthur staff and contractors, who included an architect and engineer.

You see the fruits of that effort on these pages—follies that charm and delight, and offer a fresh new way to view the Winterthur landscape.

CAROL LONG is the curator of the garden at the Winterthur Museum, Garden and Library.