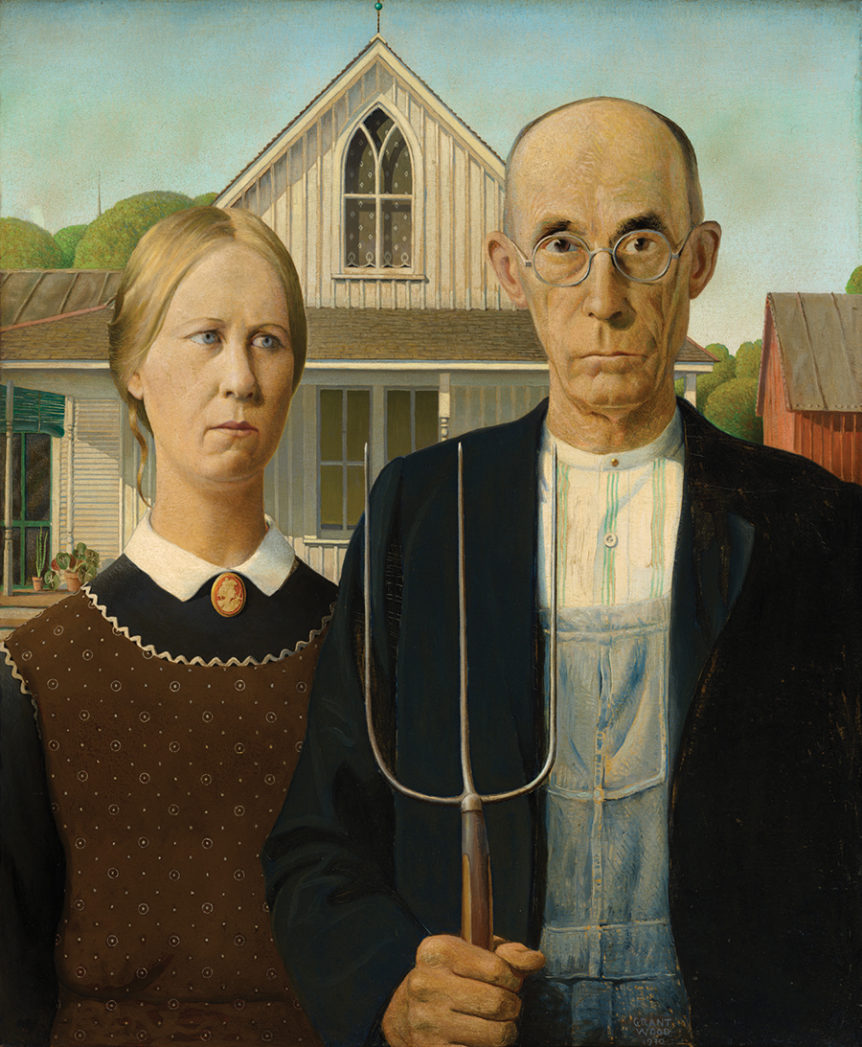 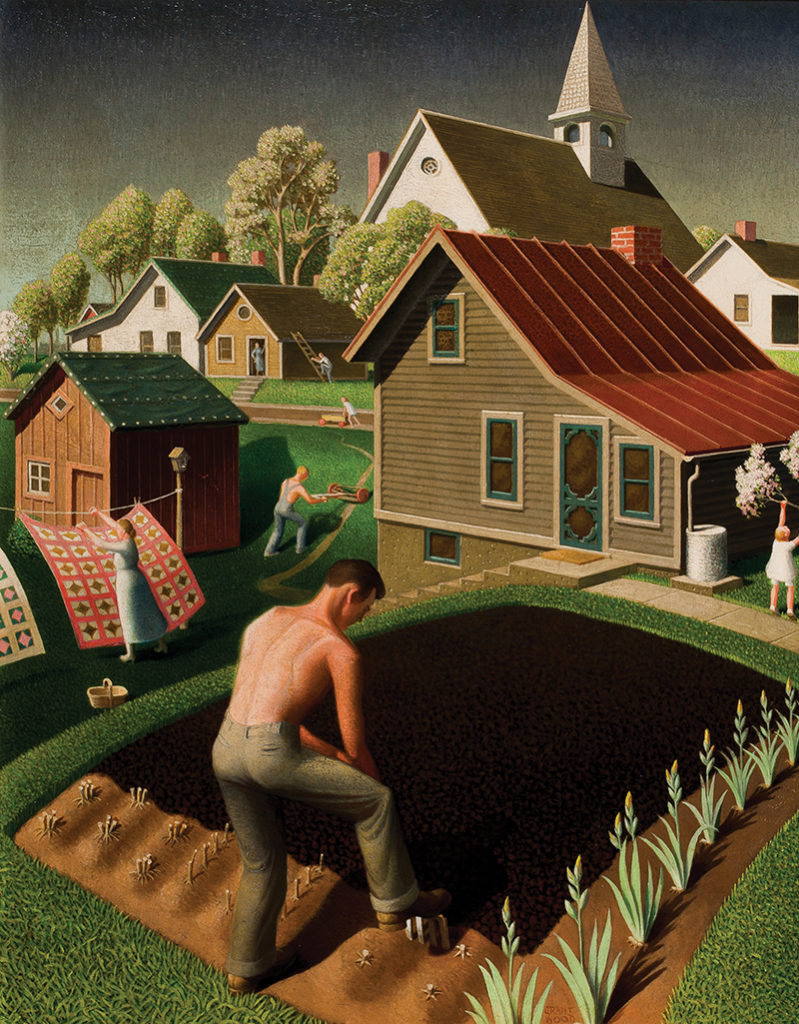 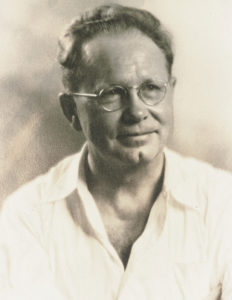 Grant Wood’s mature career began in 1929, the year of the great stock market crash and the beginning of a decade of national introspection about what constituted the country’s core values and character. The instinct to find reassurance about the future by looking back to a seemingly more innocent past led to a nostalgia for the perceived simplicity and self-sufficiency of rural and small town America. Wood’s romanticized depictions of an archetypal Midwest that was already fading into legend made him a popular, almost mythic figure during the 1930s. But with the rise of internationalism and the ascendancy of abstraction after World War II, the regionalist art with which he was associated suffered a precipitous decline in prestige. Yet even in this climate, Wood’s art continued to fascinate the public and the art world alike. Its indisputable American-ness lent itself to caricature and parody, but there was always something else about his art—something more elusive—that made it riveting. 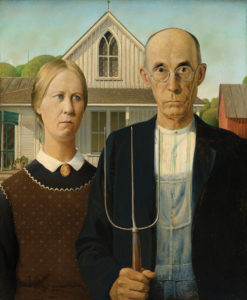 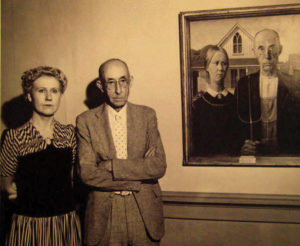 Fig. 4. The artist’s models for American Gothic—his sister Nan Wood Graham and his dentist, Dr. Byron McKeeby—pose next to the painting, in a photograph taken in Cedar Rapids, September 4, 1942.

The question of American identity is undeniably one of the central issues raised by Wood’s art. The widespread perception that his work endorses national stereotypes makes it particularly relevant today as the United States once again faces economic and cultural uncertainty, grapples with a populist backlash against elitism, and engages in bitter debates over its core values. Wood’s ideological commitment to regional art and his conviction that the self-reliance and individualism he associated with the pioneer farmer represented an “American way of looking at things”1 put him at the center of the debates over national identity even in his own time, leading historian Lewis Mumford in 1935 to call him “a National Symbol of the patrioteers . . . [standing] for the corn-fed Midwest against the anemic East.”2 There is no doubt that Wood saw the frontier values of his parents as “true and fundamental things” and chafed at the contempt East Coast intellectuals expressed for the American heartland.3 But it was others who transformed his images of Iowa into icons of American exceptionalism. Wood’s aim was much simpler: to paint the people and places he knew best with an “editorial” perspective.4 Simply reporting was insufficient. His approach to the couple in American Gothic was emblematic of his method. He spoke of trying to depict them as “more like themselves than they were in actual life” and denied that he intended to present them in a way that was either celebratory or satirical.5 “I admit the fanaticism and false taste of the characters in American Gothic,” he said,6 adding: “They had their bad points, and I did not paint them under, but to me they were basically good and solid people.”7 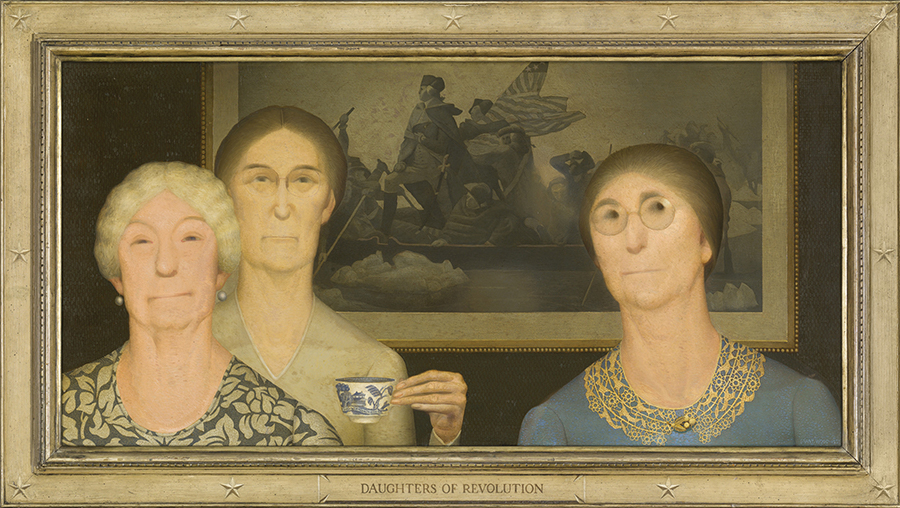 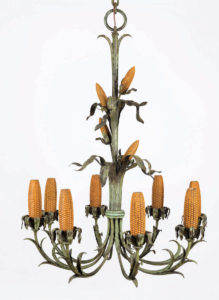 In constructing the narrative of his life, Wood always attributed his embrace of Midwestern subject matter to an epiphany he had upon returning to Cedar Rapids from Europe and seeing his mother standing in the doorway wearing an apron whose embroidery struck him as possessing the same decorative richness he had admired in the work of Northern Renaissance artists Hans Memling and Albrecht Dürer. Like other aspects of the well-advertised public image that Wood crafted, the story is only partially true. He had been moving toward depicting local subject matter for years as a result of the cajoling of his friend, the Cedar Rapids poet Jay Sigmund, and his close reading of The Midland, an Iowa-based literary magazine featuring regional writing.The Midland had been founded on the premise that each area of the country possessed a unique character and that good writing depended on the author’s deep familiarity with people and landscape of his or her own region. Through these encounters, Wood had come to believe in the richness of America’s regional diversity and the need to preserve it in the face of the creeping standardization of American culture caused by industrialization and centralization. His viewpoint differed from that of East Coast critics and artists who were simultaneously advocating for a national expression free of foreign influence. In contrast to their amorphous calls for native expression, Wood placed his hope for the emergence of a rich American art in the creation of rivalries between regions such as happened in medieval Europe, when cities competed with each other to create great cathedrals. Not content simply to show by his own example that it was unnecessary to go to New York to make a career, Wood co-founded a short-lived summer art colony in Stone City, a hamlet outside Cedar Rapids, and spent a large part of the 1930s traveling around the country urging artists to stay in their own regions and derive their subject matter from their unique sense of place. His advocacy of a regionally based art led Time magazine to single him out in 1934 as the “chief philosopher and greatest teacher of representational U.S. art.”8

For decades after Wood’s death, his art was seen exclusively through the lens of regionalism. By the 1980s, however, it was becoming clear that his role in reassuring Americans about their future during a time of economic and social upheaval was inadequate to explain his art’s enduring hold on the public’s imagination. Writing in 1984, critic Donald Kuspit observed that “in the last analysis Wood is more an artist of unconscious life than the consciously known world.”9 This became the position of subsequent scholars who have probed Wood’s biography for clues to his art’s mesmerizing effect since that time. What they discovered was an artist with a complex, contested relationship to the homeland he professed to adore. 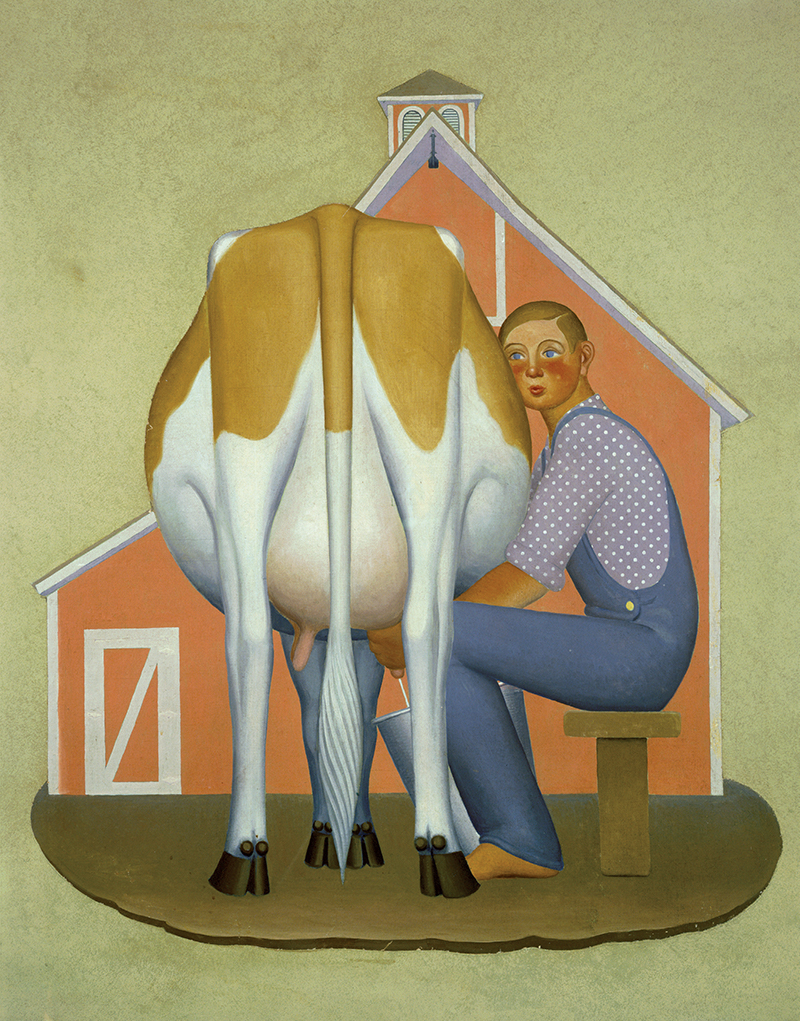 Born in 1891 on a farm near Anamosa, Iowa, Wood was only ten years old when his father died of a heart attack and the family moved to Cedar Rapids. His father’s death was traumatic, leaving Wood with what can only be imagined as unresolved feelings of vulnerability and inadequacy about his ability to measure up to the man he described as “more a God than a father.”10 As an adult, Wood would recall the experiences of his early years on the farm as “clearer than any I have known since”11 and propound the theory that people are “conditioned in the first twelve years of our lives” and that “everything we experience later is tied up with those twelve years.”12 Those sentiments led to paintings that referenced the family’s 1890s farm rather than the realities of farm life in the 1930s. Unlike peers who pictorially depicted the past, however, Wood’s goal was not so much to celebrate a vanished reality as it was to recapture his childhood.13 But the tension that came of attempting to do that as a sexually closeted artist living a life totally different from the one he sought to glorify seeped into his art, endowing it with an eerie silence and chilling sense of make-believe. By subconsciously expressing the tension of trying to reconcile the imaginary “dream world” of his childhood with his conflicted inner life, Wood created enigmatic works of hypnotic psychological intensity. 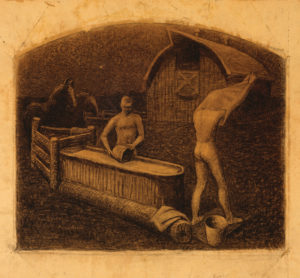 Wood began his career as a decorative artist. Even after he shifted to fine arts, he retained the flat, decorative patterns and simplified organic forms of arts and crafts. It distinguished his work from that of his fellow artists Thomas Hart Benton and John Steuart Curry, with whom he formed the Regionalist Triumvirate. As an impressionist painter in the teens and twenties, Wood had repressed his natural proclivity for pictorial exactitude in favor of loose brushwork. By 1929, however, he had come to believe that crisp edges and meticulous description could be used to convey a distinctly American quality, especially suggestive of the Midwest. His adoption of these qualities as a way to communicate what he called “American newness” marked the onset of his mature style.14 Wood was not alone in identifying precision and fidelity to facts as an “American quality.”15 The idea that emphasizing concrete, verifiable things was distinctly American was widely held at the time—and was the reason abstraction was alien to the national consciousness. Despite Wood’s proclivity for stylized ornamentation, his use of a pictorially precise vocabulary to depict familiar images of rural and small-town America helped secure his reputation in the 1930s by answering the longing that prevailed then for factual authenticity and the sense of being face-to-face with something “real.” 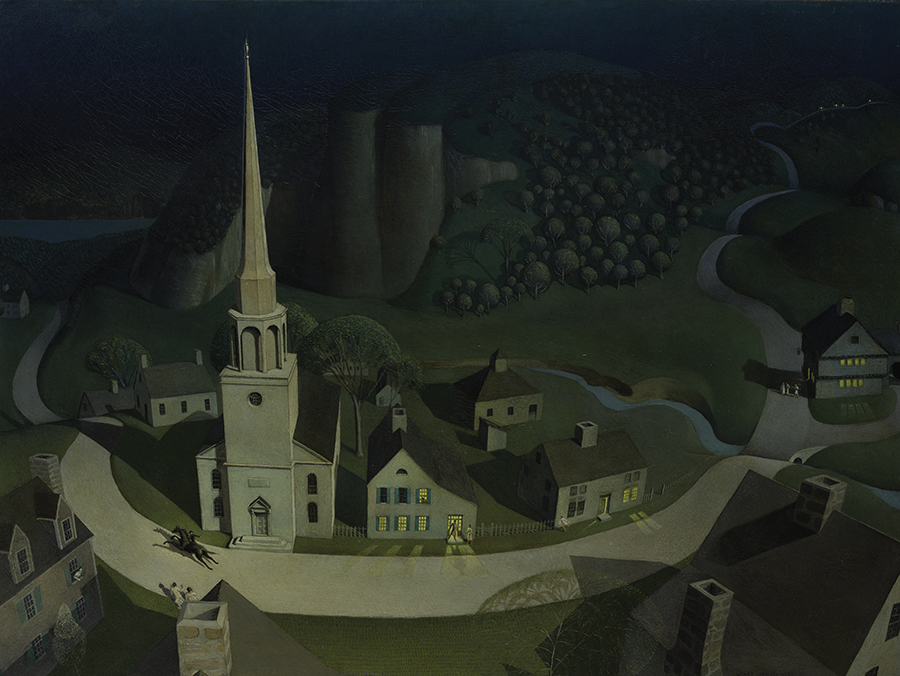 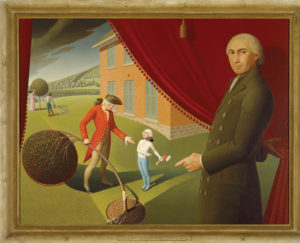 During the heyday of regionalist hegemony, vanguard critics in New York castigated Wood for his hostility to abstraction, not understanding that it stemmed from his democratic belief in the integration of art and life, which he felt abstraction had forfeited in favor of “too top-lofty” ideas that were divorced from “general understanding.”16 Wood himself acknowledged having borrowed valuable tools from abstraction. His criticism was that artists had taken simplification too far, with a resulting loss of audience and, ultimately, the style’s demise. “Art for art’s sake is dead,” he declared. “Art heretofore must mean something . . . [it] must get back to the old simple relationship between the artist and the public at large, when art was not only a cultural but a dynamic force.”17 Wood viewed storytelling as key to this. Like a novel or short story, he believed every painting must present a complete idea, having “a beginning, a middle and an end.”18 To achieve this in portraiture, he included images that suggested something about the life and character of the depicted subject. He left these “props” intentionally ambiguous, making the stories they suggest so enigmatic that they defy ready explanation; they are puzzles to be deciphered by viewers based on their individual attitudes and experiences.

After World War II, the vogue for abstraction marginalized art that told stories. The reemergence of storytelling in recent decades allows us to look at Wood’s career with fresh eyes. What emerges is a recognition that the appeal of his art owes less to the insight it offers into the past than to its emotional power. Wood’s success as an artist commenced when he began to paint from his own life. As he himself acknowledged, it is “the depth and intensity of an artist’s experience that are the first importance.”19 Great art begins, he wrote, “by looking inside ourselves, selecting our most genuine emotions.”20 In creating art out of his deep-seated, inner anxieties, Wood left a body of work that, in its unresolved tensions, is more universal and timeless than he might ever have imagined.

Grant Wood: American Gothic and Other Fables is on view at the Whitney Museum of American Art through June 10.

BARBARA HASKELL has been a curator at the Whitney Museum of American Art since 1975.