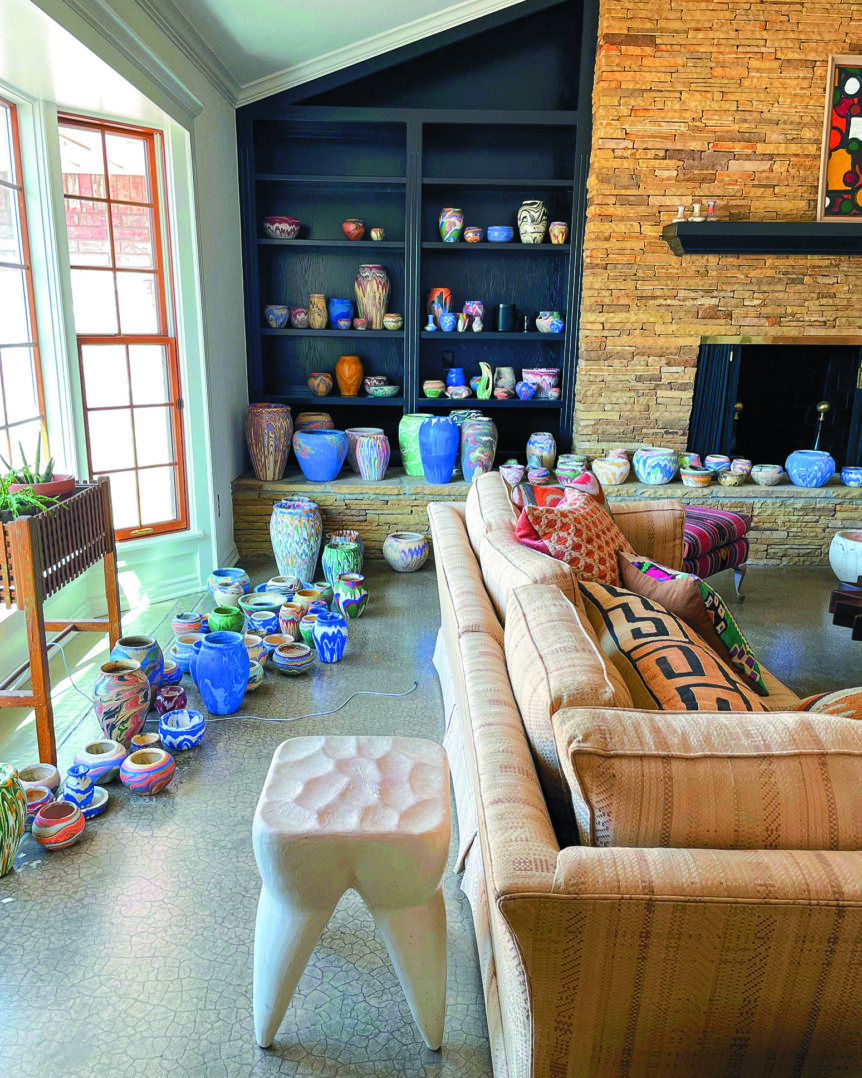 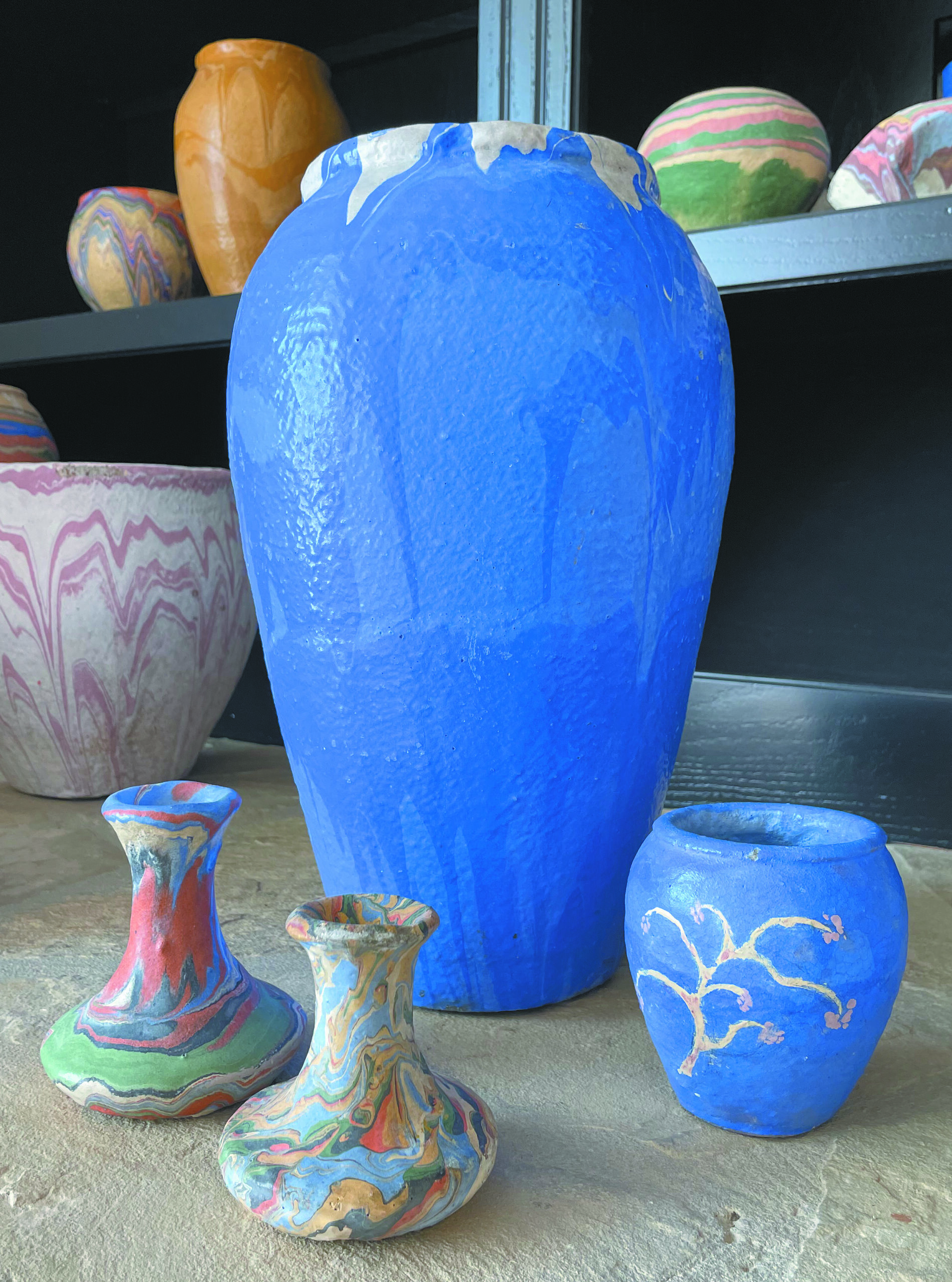 On a day in 1935, ceramist Harold Horine and his mother, Maude, packed up their car in their hometown of Hollister, Missouri, and headed west. The road lay open before them, a black, sun-baked line cut into the landscape of the Dust Bowl. They traveled, not to sell Harold’s pottery, but to sell his process for making it. It is unknown who was driving, which is indicative of much of Harold’s career. 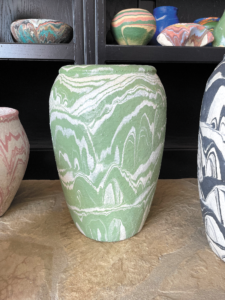 Born in 1898, Harold struggled to hold down a job but excelled at tinkering, which is how we like to describe what many artists do while waiting to catch their break. Harold’s came when, using his experience as a house plasterer, he invented a process to create concrete vessels without an exterior mold. He decorated the forms in drippy swirls of bright colors and called them Como-Craft, after nearby Lake Taneycomo. The pots, which Horine sold from a roadside stand, gained popularity among tourists, and either Harold or his mother had the idea of exporting the production process to other regions—for a fee. For a reported $500, a person could get instruction from Harold Horine himself, and set up their own version of his workshop with an exclusive license to make and sell the pottery within a defined area. Today, Como-Craft style pieces pop up all around the United States, from Missouri to Arizona to Oregon, thanks to the regional makers Harold trained and licensed.

Most of what we know about Harold Horine and his work, which eventually came to be known generally as “Ozark Roadside Tourist Pottery” regardless of geographic origin, is thanks to the work of Ed Dobbins, who found his first few drippily-glazed pieces at an antiques shop in Phoenix, Arizona. Dobbins, an archaeologist and Phoenix-area historian, was fascinated by the eccentricity of the pottery forms and what he calls their “very strong and very vibrant colors.” He eventually traced them back to Harold, Maude, and that day in 1935. 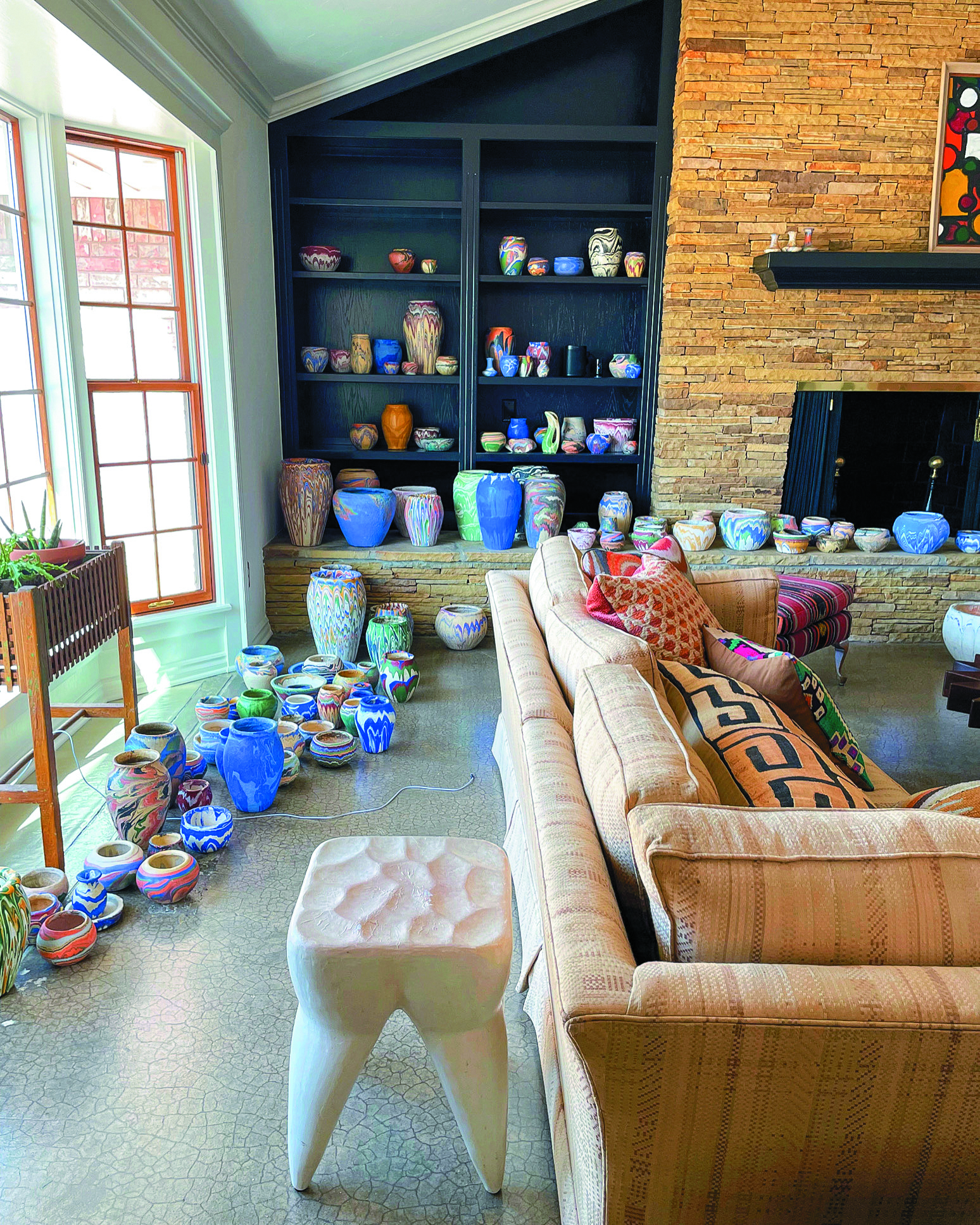 View of Mathis’s collection showing an assortment of his Ozark Tourist pieces, as well as the Nemadji Tile and Pottery Company objects he also collects. Photograph courtesy of Daniel Mathis.

The Horines’ trip was prompted by an invitation from the Rev. Joseph Hillhouse, the director of the Desert Mission in Sunnyslope, Arizona, who asked Harold to teach tuberculosis sufferers living there how to make his vessels. Sunnyslope had gained a reputation as a place where sick people who were without the funds to pay for care at a sanatorium could congregate to find some relief from tuberculosis in the dry desert air. They lived in tents and shacks with minimal access to medical treatment, and a lot of time on their hands. The Desert Mission was created in 1927 to address the needs of this community, one of which was to have something to do all day. Hillhouse proposed that the pottery be sold to benefit the mission, but the primary purpose wasn’t profit, as he believed that the opportunity to be productive would positively benefit the Sunnyslope patients. 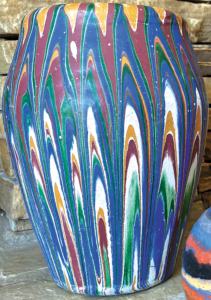 Hillhouse had learned about Horine’s work a year earlier while on a fundraising trip, and it’s likely, ANTIQUES 59 Dobbins says, that Harold and Maude waived their usual fee on account of the social good of the endeavor. The Sunnyslope workshop operated until 1939, when a change in mission leadership led to a shift in institutional priorities.

In Sunnyslope, as in Harold’s home workshop in Hollister, the pots sold well to tourists, who were drawn to the primitive nature of the colorful vessels. Today, it’s a look sometimes called ugly . . . but as a compliment.

This may be why Horine’s designs are having a moment. Bulbous technicolor sofas and chairs are in. This year, using spray foam as a sculpting material became a viral TikTok trend; and Dani Klaric, a young interior designer with more than a million social media followers, taught people to staple shag rugs to their walls and decorate mirrors with neon-colored air-dry clay. This is all to say: we live in a time uniquely tuned to re-embrace Harold Horine’s psychedelic color schemes.

Daniel Mathis is a lawyer by day and an Instagram-famous, self-described maximalist by—well, also by day. His account, @NotAMinimalist, is responsible for reintroducing the idea of the accumulation of stuff as a good thing to millions through his posts about his collections and collaborations with designers, artists, and brands. “I usually say that [collecting] was the first thing I was naturally inclined to do,” Mathis says. He has, he says, a “genetic predisposition to accumulate” that began with a rock and fossil collection he curated in his closet as a third grader. 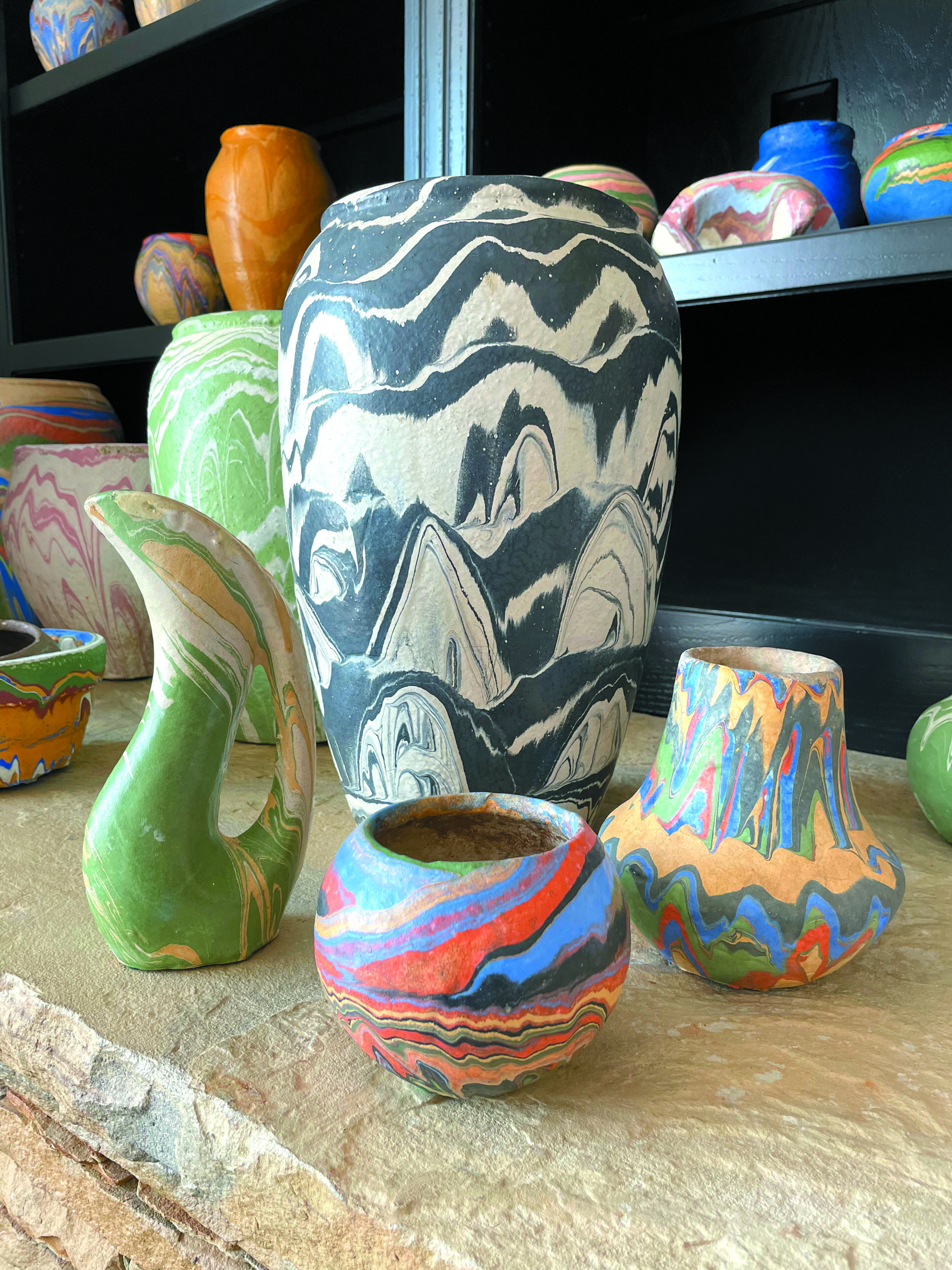 Another assortment of Ozark Tourist pieces. The black and white vase at rear is 14 1⁄2 inches tall.

Because of social media, Mathis’s personal trove of 135 pieces is the best-known collection of Ozark Tourist Pottery, and it may quite possibly be the largest. He says he first came across a big Ozark pot in Tulsa, Oklahoma. He didn’t know what it was, but it seemed like a clunkier, and brighter, version of the sleeker Nemadji pottery pieces he was already collecting. 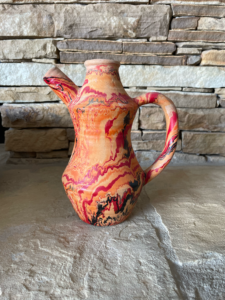 A 7 1⁄2-inch-tall pitcher
made by the Nemadji Tile
and Pottery Company.

The Nemadji Tile and Pottery Company of Moose Lake, Minnesota began using a simple and clever method for producing vivid marbled finishes in 1929: unglazed pots were dipped into vats of water, atop which floated pools of oil-based house paint in a variety of colors. (Their pots were marketed as “Nemadji Indian pottery,” despite having no connection to Native peoples.) Ozark and Nemadji pots bear a superficial resemblance to one another, but Mathis has two quick ways of telling them apart: decoration and weight. Where Nemadji finishes are thin and light, those on Ozark pieces are thick and textured; and Ozark pots are much heavier. Nemadji pots are also often marked, while Ozark pieces rarely are.

Ever since Mathis began sharing images of the Ozark collection he’s amassed over the past seven years on social media, he’s seen prices for the pieces rise. A piece that may have been $75 when he started collecting was recently listed on eBay for $500. The pieces have also been popping up on more decorator-centric platforms, such as Chairish. As the prices have risen, Mathis has gotten more particular, and recently he drove from Oklahoma City to Missouri to pick up a rare Ozark lamp. “It would be the perfect time to sell my collection,” he says, “but I don’t want to.” Such is the mind, and heart, of a collector. 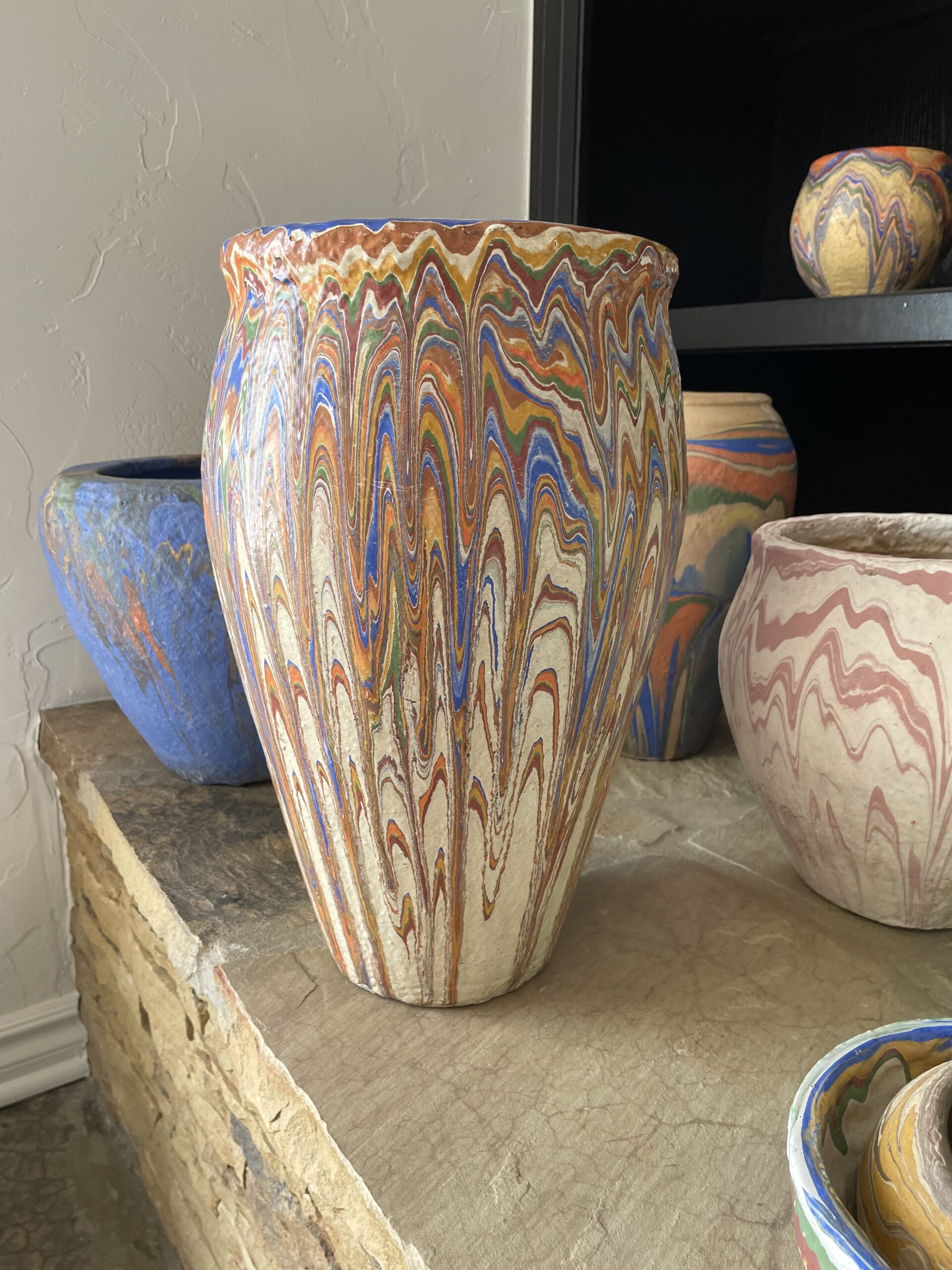