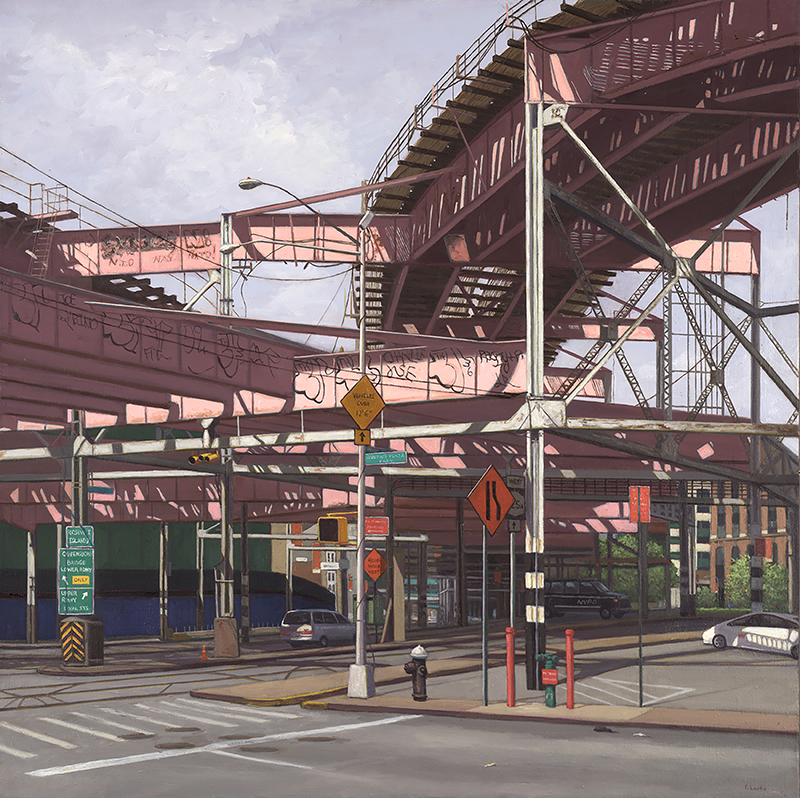 Often in The Magazine ANTIQUES we profile contemporary artists who draw inspiration from subject matter, materials, or methods of the past. But what about contemporary artists whose work embodies an indebtedness to art history in a less literal way? Consider Valeri Larko, the subject of an (online-only) exhibition that opened at Lyons Wier Gallery in Manhattan on March 26. The Westchester-based painter of colorful factories and houses collapsing into themselves, of industrial canals and graffiti, could easily be categorized with other cataloguers of the contemporary landscape, such as photographer Stephen Shore, photorealist painter Richard Estes . . . or even Google Street View. But if you can look past the trappings of the twenty-first century that Larko renders so carefully, a much older subject becomes apparent: the sublime.

Larko studied at duCret School of the Arts in Plainfield, New Jersey, as well as New York’s Art Students League. After moving in with a boyfriend in Jersey City Heights, she says, “I got bored of having him model and of painting self-portraits, and thought, ‘What am I going to do now?’” A park near the couple’s apartment where Larko would walk the dog had a commanding view of the area. “You might not know this, but Jersey City is surrounded by industrial parks,” Larko says. She shifted her focus from flesh to factories, and was soon tooling around New Jersey from Linden to Elizabeth to the Jersey Turnpike, in search of picturesque sphere tanks and chimneys. Relocating to the Bronx in 2004, Larko added views of once-ubiquitous figural signs—like the enormous hand in Hi-Five, Bronx, 2019—as well as street scenes and graffiti-covered abutments, to her thematic arsenal.

It may come as a surprise, but Larko’s treatment of these rough and grimy subjects is unfailingly affectionate. As she explains, “for those of us who grew up in the New York Metropolitan area, industrial sites are familiar.” Setting up in a moveable studio she calls her “paintmobile”—a 2011 Toyota Venza—she’ll return to the same spot over the course of weeks or even months as she works up a picture, carefully observing its characteristic light and making friends of passersby. With her confident color work and composition, Larko can make elevated subway tracks look as dignified as the rainy streets and pagodas in the pictures of Japanese woodblock artist Kawase Hasui; her empty Bronx streetscapes have the same anomie as Edward Hopper’s paintings. “First, people respond to the beauty of the painting, then they respond to the familiarity,” says Larko.

The Lyons Wier show (whose timing couldn’t be more ironic) focuses on the billboards that Larko began to paint in the wake of the 2008 financial crisis. Many of the pictures in the series are low-key hilarious—advertisements for personal injury lawyers whose grinning mugs are rendered even hammier by their depiction in paint; fire and brimstone proclamations from Christian groups superimposed over rising flames. A few, however, like Sign of the Times VII (Bruckner Blvd), 2019, are blank, and these are the best. Looming over the clamorous city, they sing a song of profound silence.