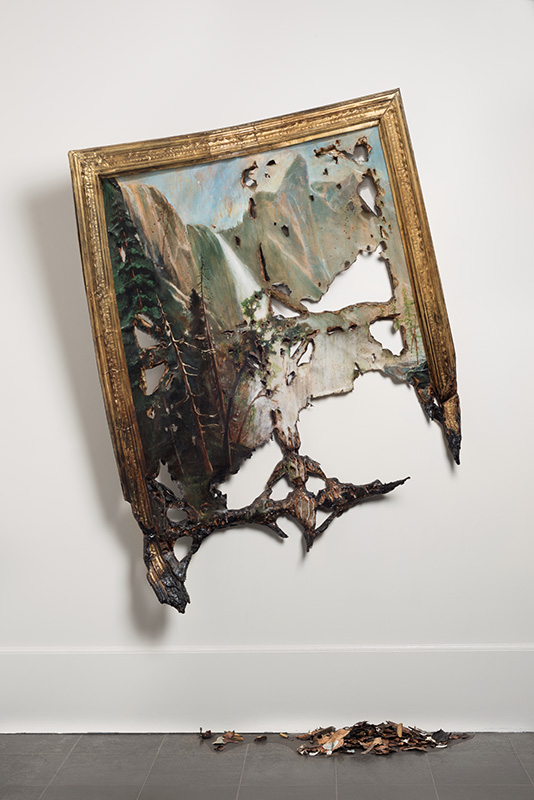 Nature’s Nation: American Art and Environment, which has recently moved from the Princeton University Art Museum to the Peabody Essex Museum (PEM) in Salem, Massachusetts, and will go from there to Crystal Bridges in Bentonville, Arkansas, may be among the most important exhibitions of our time. That does not mean it is inarguable . . . or even always agreeable, but no matter. By bringing the weight of ecological thinking to bear on the course of American art history, exhibition curators Karl Kusserow and Alan C. Braddock, and their colleagues at PEM, have changed our angle of vision on landmark works from Charles Willson Peale’s The Artist in His Museum (Fig. 5), painted in 1822, to Morris Louis’s 1954 abstraction Intrigue. By also introducing the work of contemporary artists attuned to ecological issues they have put our art history on the same path as environmental history, no small accomplishment. 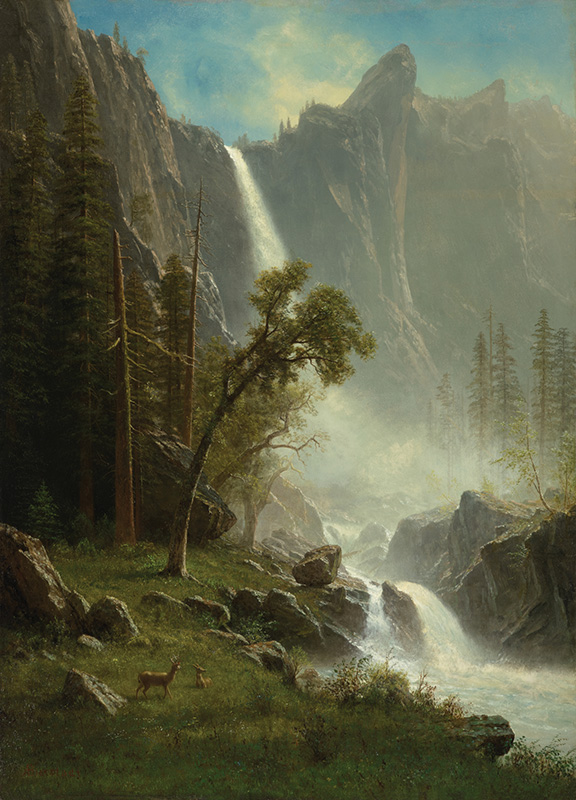 The exhibition, heavy in complexity and scope and with more than a hundred works accompanied by many long explanatory wall labels, crowded the Princeton galleries. PEM, with the luxury of much more space, has doubled the square feet in a circular design no doubt meant to suggest that what goes around comes around. They have placed Native American objects in the foreground, adding twelve from their collection; by eliminating some wall labels and shortening others, they have lightened the load of didacticism in the original installation (and its four-pound catalogue). The PEM exhibition begins with a fragment of land art from the arts collective Postcommodity’s Repellent Fence/Valla Repelente (see Fig. 3) from 2015, which stands for our interconnectedness; it ends with a call to action prompting visitors to do their part in the protection of air, water, land, and wildlife. These alterations to the exhibition should engage visitors rather than leaving them feeling helpless about the earth’s fate. 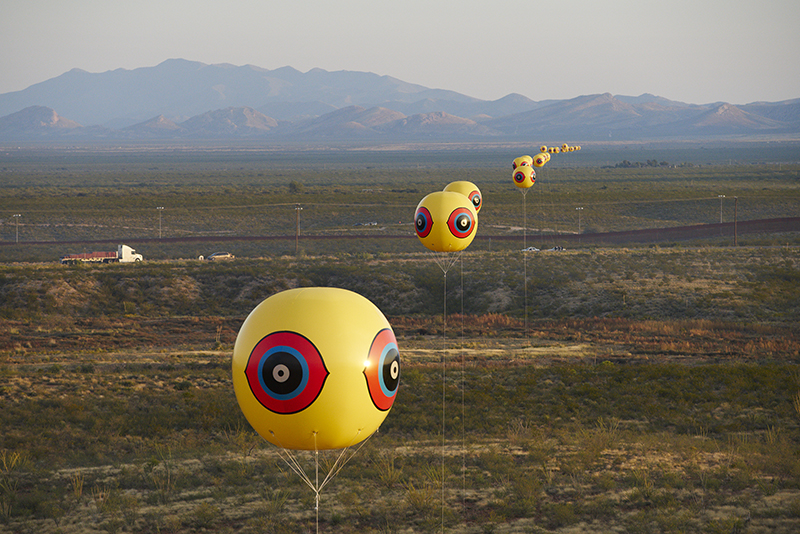 Kusserow and Braddock titled their adventure in ecocriticism Nature’s Nation as if to suggest that God shed his grace on our stewardship of the land . . . but they don’t mean it that way. Neither did Perry Miller, who coined the ironic phrase in his 1956 book Errand into the Wilderness. If I could have made one suggestion for the nineteenth-century material in the exhibition it would be to mount in large type the following quotation from Miller:

The more rapidly, the more voraciously, primordial forest was felled, the more desperately poets and painters—and also preachers—strove to identify the unique personality of this republic with the virtues of pristine and untarnished, of “romantic,” Nature. 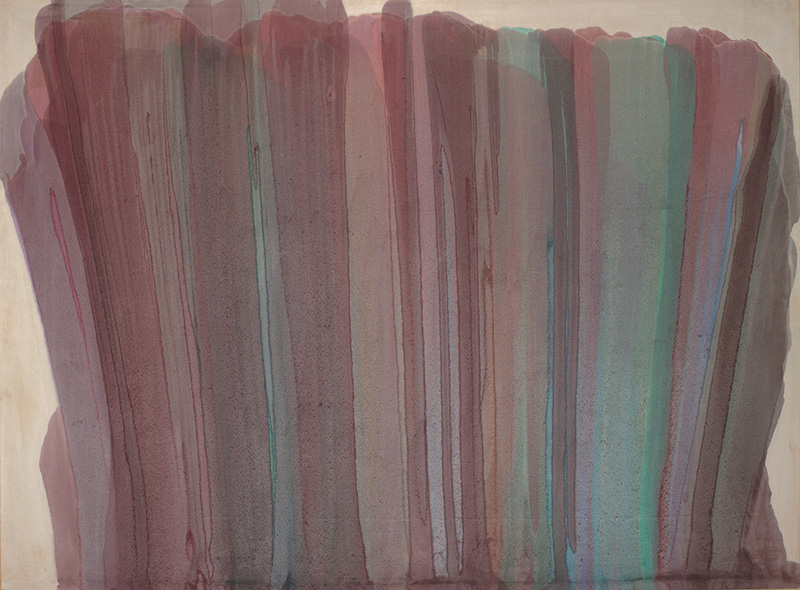 That is one of the contradictions we must ponder as we consider the art of our past. And here is another: the vacant wilderness was not in fact vacant. As he celebrated the “creation” of Yellowstone National Park in a series of works, Thomas Moran eventually emptied it of the tribal people from whom it had been taken. Describing this as a kind of  “environmental colonization” allows the curators to emphasize the familiar distinction between the Euro-American notion of owning the land and the Native American sense of belonging to it. Thus the presence of a great number of Native American works both past and present. Like the Chilkat robe whose motifs exhibit the interdependence of plants, animals, and people intrinsic to Tlingit and other indigenous peoples (Fig. 6), these objects tell a quite different story about man and nature. 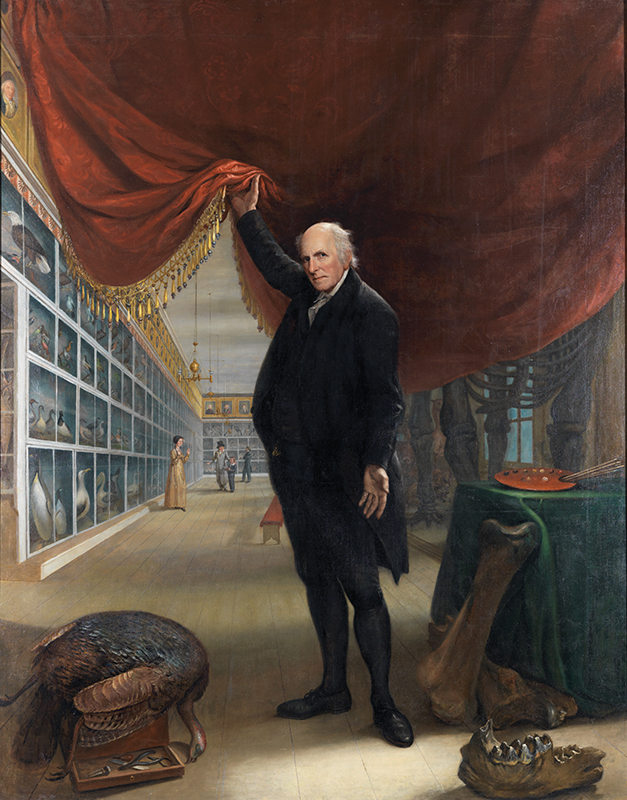 By interspersing contemporary works attuned to the urgency of environmental issues with historical ones, the exhibition casts an eye on where it all went wrong, beginning with Peale’s The Artist in His Museum. In the painting, the European classical idea of the Great Chain of Being is portrayed in a hierarchical display: portraits of men occupy pride of place above the lesser creatures. Only the bones of the mastodon interrupt the natural order by raising the possibility of species extinction, something Peale doubted even as he was eager to display this new world curiosity. 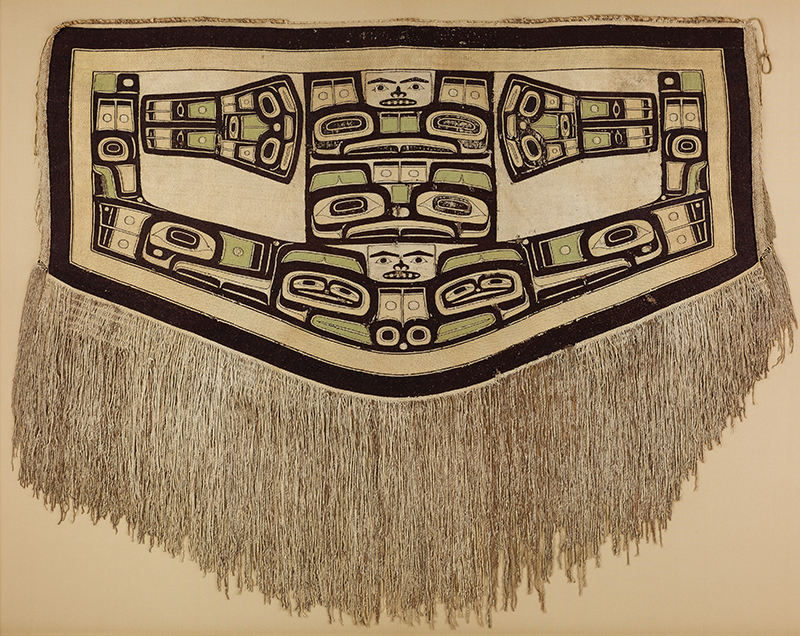 By contrast, the contemporary artist Mark Dion engages what he describes as the “inherent violence” of the Great Chain of Being in ironic ways, satirizing the idea of hierarchy and human-centric thinking in his 1994 Scala Naturae, a staircase to nowhere that includes a random selection of organic and inorganic material. 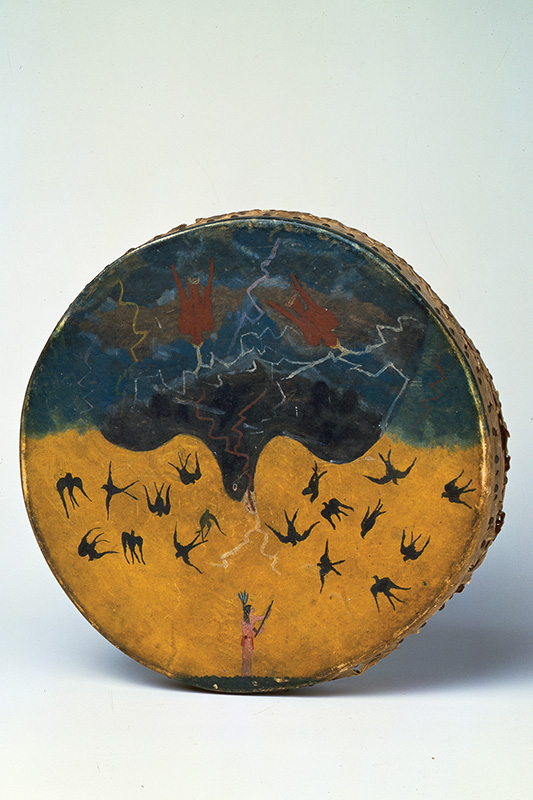 In the romantic period,  Miller reminds us, nature was pressed into the service of the burgeoning republic and expansionism was rationalized by the belief that America is “instructed and guided by mountains, is chastened by cataracts.” But, as Kusserow observes in his catalogue essay, “while seeking to enhance appreciation for nature, [Albert] Bierstadt and [Frederic Edwin] Church in the end promoted its estrangement.” The consequences of the sublime in nineteenth-century landscapes were, in this view, to emphasize the vast distance between man and nature to the peril of those environments close at hand that do not inspire awe, something that is illustrated in the exhibition’s pairing of Bierstadt’s Bridal Veil Falls, Yosemite (Fig. 2) of about 1871 to 1873 with Valerie Hegarty’s 2007 unraveling of that image in Fallen Bierstadt (Fig. 1). 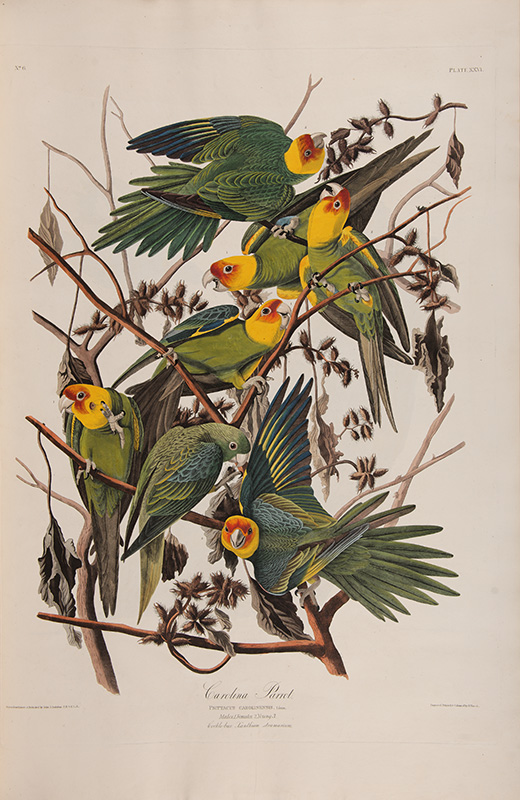 There are sections on the environmental impact of artists’ materials, beginning with the mahogany in an eighteenth-century high chest on view. (Mahogany was harvested by the enslaved labor of Africans and indigenous people in the Caribbean and Central and South America; its extraction depleted local supplies.) A silver sugar urn of about 1800 by Joseph Lownes is a reminder that both silver and sugar were part of a complex colonial economy that had devastating effects on people and the environment. In a more recent example, Morris Louis’s Intrigue—created with paint thinned with turpentine and poured by the artist directly onto the canvas—is accompanied by the information that the production of turpentine exhausted forests, depended on exploited labor in the southeastern United States, and the product itself probably killed the artist, who died from lung cancer at forty-nine. 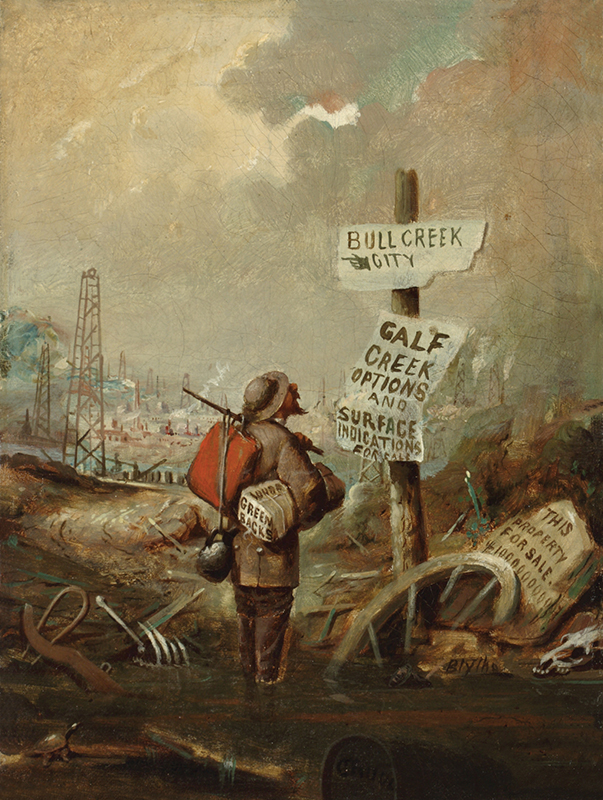 Fortunately, there is more to Nature’s Nation than eco-disasters and the dismantling of some revered works of American art. The inclusion of artists such as Sanford Robinson Gifford, Martin Johnson Heade, and, of course, John James Audubon (Fig. 8), as well as quotations from the nineteenth-century naturalist George Perkins Marsh indicate that an environmental perspective was not born on Earth Day in 1970 but extends back as far as the middle of the nineteenth century. Some artists and thinkers of the day saw quite clearly that greed would shape the future of the land. David Gilmour Blythe’s Prospecting/Bullcreek City (Fig. 9), a wicked send-up of the petroleum craze painted about 1864 to 1865, is one of the delightful if disturbing surprises in the show. 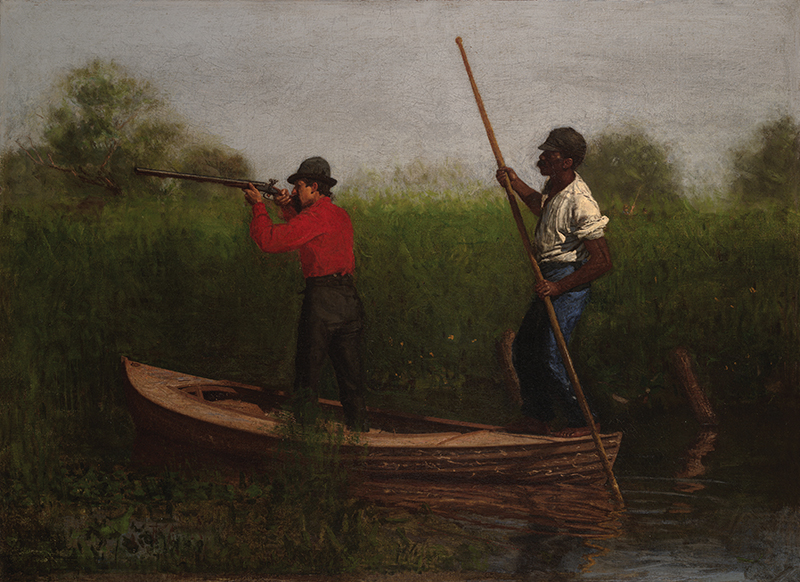 What then did I question in this worthy undertaking? I mainly worried that the implicit dichotomy between environmentally aware art and the work of earlier landscapists was too stark to be entirely accurate. Reading the moralized scenes of nature by Thomas Cole, Church, and others through contemporary eyes inevitably distorts them; we simply do not have their allegorical habits of mind. Elsewhere, and more egregiously, there are a few odd moments of polemical overkill. Thomas Eakins, for instance, is criticized in one wall label for not having painted working-class conditions near the scene of his Rail Shooting on the Delaware (Fig. 10) and compared unfavorably with The Ironworkers’ Noontime (Fig. 11), by his student Thomas Pollock Anshutz, who is praised for depicting the factory conditions in Wheeling, West Virginia. This seems churlish when it isn’t beside the point. Here is the descriptive wall text for the unfortunate coupling:

Eakins depicted a hunting scene at the Neck, a marshy, polluted neighborhood south of central Philadelphia that was home to African Americans and working-class immigrants. The privileged, well-to-do uptown excursionist pictured by Eakins came and went from this suburban neighborhood to hunt rail, ground-living birds, with hired help. Here, an unidentified African-American guide expertly holds the boat steady while the hunter he assists takes aim. The scene contrasts dramatically with the painting by Eakins’s student Anshutz of factory workers taking a break beneath belching smokestacks. Painting at an iron mill in Wheeling, West Virginia, Anshutz more frankly acknowledged the degraded environmental conditions associated with modern industrial toil. 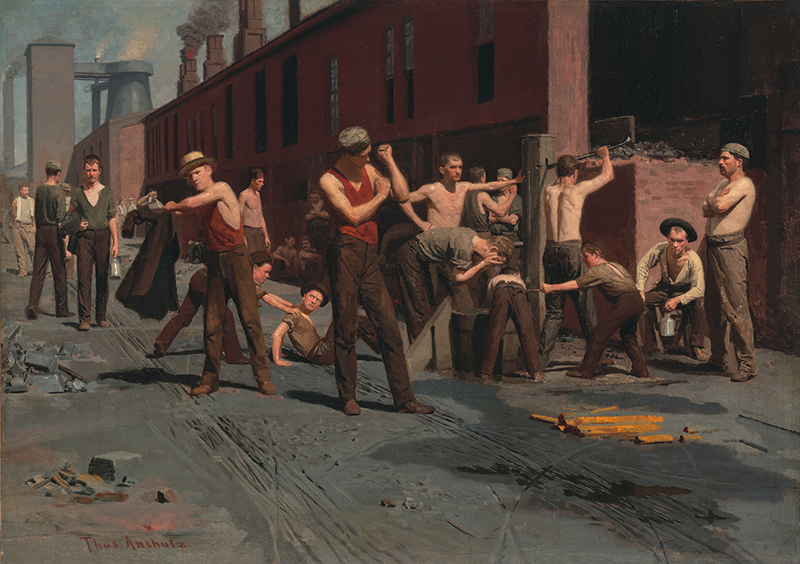 If these are missteps, they come with the territory of mounting a show with so much urgency and passion. Nor do they undermine the message that this was a beautiful country, and much of it has been trashed. Nature’s Nation may not be the whole story of how that happened, but it certainly marks an important moment in our public reckoning.

Nature’s Nation: American Art and Environment is on view at the Peabody Essex Museum in Salem, Massachusetts, to May 5, and then travels to the Crystal Bridges Museum in Bentonville, Arkansas, where it may be seen from May 25 to September 9.