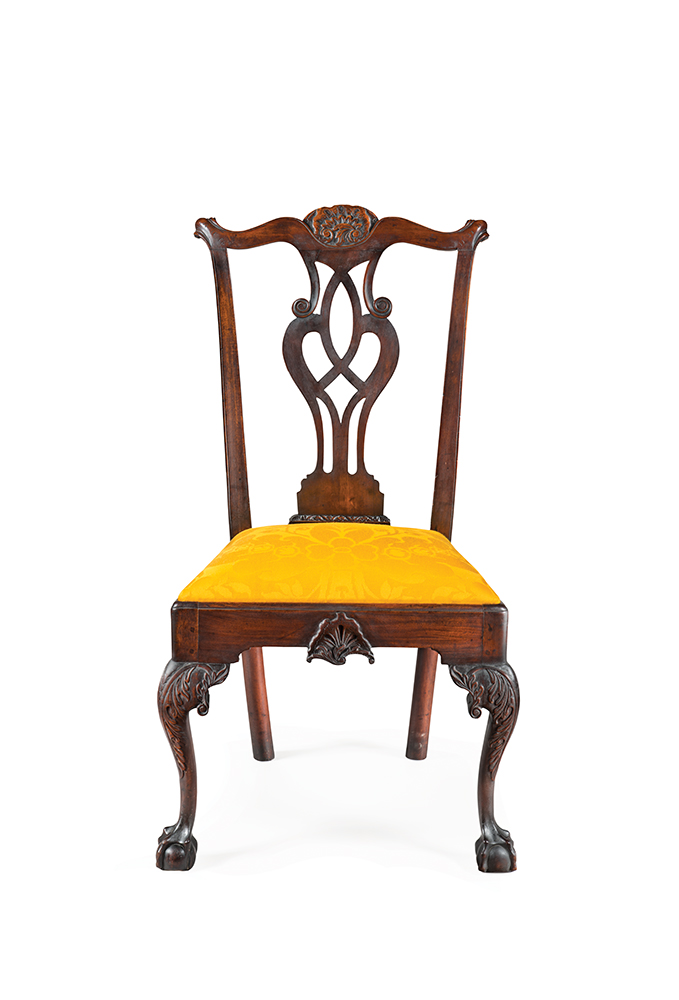 In the spring of 2014 the Philadelphia Museum of Art finalized plans for a select catalogue of its American furniture dating from 1650 to 1840—a volume that, given the distinction of the collection, will, surprisingly, be the first. Slated for completion in 2020, it will feature two hundred entries on more than three hundred pieces of furniture (two chairs from a set comprising one entry, for example) out of more than a thousand in the collection. A flurry of activity is underway—conservation treatments supported by the Leslie Miller and Richard Worley Foundation complementing curatorial investigation supported by the NEH.

The project has allowed us to peel back the layers and balance what is already known with the chance to look more closely, take on new manuscript research, and merge digitized records with early histories. In the process, time-honored masterpieces of American furniture are revealing more about the people who made and owned them and the places and ways in which those people lived. With the editor’s manuscript deadline of June 1, 2019, looming, I am pleased to share a small taste—an aperitif—of discoveries made, and puzzles addressed, while, quite literally, taking inventory of the PMA’s old friends.* 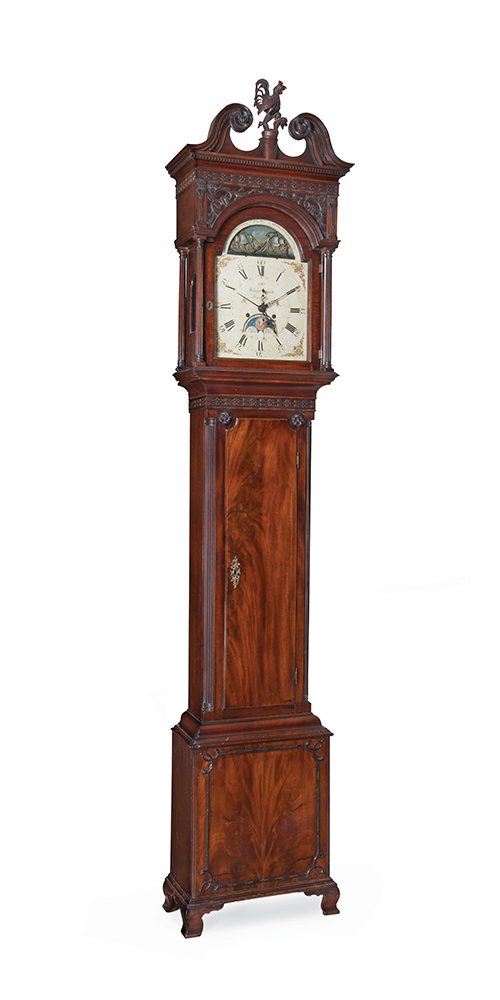 The Frederick Dominick clock/George Pickering case: The web of artisans in early Philadelphia

Over the past eighteen months, I have read—comprehensively—nearly all the Philadelphia probate records from 1682 to 1800.  This has not only rewritten my understanding of Philadelphia’s sophistication, diverse demographics, and intricate social and commercial networks (especially with southern and Caribbean ports), but has also exposed the names of heretofore unknown artisans—and connections between them, such as joiners and cabinetmakers with painters, who ornamented furniture as well as varnished it.  This tall clock with works by Frederick Dominick and dating between about 1773 and 1779, provides an excellent example.

Its painted dial has long been saluted as an early example of its type, since convention holds that painted dials did not appear with regularity on this side of the Atlantic until after the Revolutionary War. The monumental case, topped by a rooster—a double entendre in also being a nod to Saint Peter, the patron saint of clockmaking—is identical to one sold in June 2002 in Part Two of Sotheby’s Masterpieces from the Time Museum sale. That clock is labeled by Philadelphia cabinetmaker George Pickering, a grossly under-appreciated and under-studied cabinetmaker who cultivated the talents of fellow artisans to create furniture in which academic design is combined with elegant execution.

Together with merchant John Thompson and whitesmith William Shannon, Pickering was co-executor of the estate of painter John Winter,  who first advertised from the shop of Plunkett Fleeson in 1740 as a “Painter, from London . . . Landskip and Coach-Painting, Coats of Arms, Signs, Shewboards, Gilding, Writing in Gold or common colours and ornaments of all Kinds.” By October 1740 he was partnered with Gustavus Hesselius—adding mending old pictures to his list of talents; and by the 1770s, he was painting landscapes and copies of old master portraits, “coach and chaise painting…arms, cyphers, and ornamentals of every kind…varnishing and mending pictures…painting the inside of houses to represent stucco, fret or carved work.”  Winter’s probate inventory includes a large collection of prints, boxes and pallets of paint, brushes, a stone and muller, boards, and “oyl cloth on stretching frames.”

Winter, Pickering, and whitesmith Shannon together possessed all the skills necessary to make, prepare, and paint the dial for Dominick’s movement and to make the mahogany case. This implied relationship between them is supported by the fact that several other clocks have cases attributable to Pickering combined with dials that appear to be by the same hand as the PMA’s: one each at the Delaware Historical Society (movement by Thomas Crow) and Independence National Historical Park (movement by Frederick Maus); and at least two in private collections, including the labeled Pickering case in the Sotheby’s sale noted above. Perhaps their collaboration can adjust our dating of other painted-dial clocks.

Pickering himself indentured at least two apprentices, Thomas Heber in 1771 and William Hines in 1772, and in 1775 he dissolved a substantial partnership with cabinetmaker Thomas Bryan (d. 1799), another well-connected and under-appreciated artisan. Cabinetmakers William Rigby (d. 1796) and Jonathan Gostelowe (1744–1795) appraised Pickering’s estate on December 31, 1784, listing veneers, 109 feet of mahogany planks, 125 feet of walnut, finished and unfinished mahogany and walnut furniture, walnut chair feet, carving tools, “chizzels,” gouges, pincers, numerous planes, “All the Patterns,” and “40 Feet of Walnut . . . for a Clock case.” While Pickering’s inventory includes all the tools necessary to carve, it should be noted that he lived near carvers Wilkinson, William Lake, and William Rush as well as fellow cabinetmaker-joiners Stephen Maxfield, William Wayne, and Peter Morgan.

Similarly interconnected, Peter Morgan maintained a professional relationship with painter William Fling (1737–1834), the father of cabinetmaker Bennett Fling. The elder Fling served as Morgan’s power of attorney and was bequeathed Morgan’s entire estate. He was mostly known as a painter of houses and interiors, such as that of Ben Franklin and the “elaborate decoration on the church and chancel walls” of the interior of Christ Church, but, like Winter, he also varnished and painted furniture.

A standout chair: The rabbit hole of provenance

One of my favorites in the collection is this chair. Its design solidly represents Philadelphia’s late baroque phase and is akin to contemporary London chairs—reminding us of Philadelphia’s close artisanal and trade relationship with Britain, especially in the work of carvers. It is perfection in my eye. Classical proportions. A strong profile punctuated with just enough carving to complement—but not overwhelm—the form or the rich mahogany.

The chair has quietly lingered in the PMA for almost a century with only veiled references to its origins. The museum purchased it in 1922 from the Little Junk Shop, an antiques concern in Washington, DC. Archival notes simply identify it as “an early Philadelphia mahogany chair with an interesting history and a probable important bearing on our problem of identifying the work of the best Philadelphia cabinet makers.” It is marked III; another chair from the set, in the Yale University Art Gallery, is marked IIII, with a slip seat marked V. In 1935 William McPherson Hornor Jr. published a third example in his landmark Blue Book Philadelphia Furniture, describing it as the “McMurtrie Family Side Chair” and listing Eleanor Cuyler Patterson as the owner.

Years of study have shown that Hornor’s statements always seem to possess at least a kernel of truth. The McMurtrie reference suggests that the chairs descended through the family of Ann Gordon McMurtrie (1756–1821) and her husband, Philadelphia merchant William McMurtrie (1740–1807), a native of Ayrshire, Scotland, who owned properties throughout Philadelphia, including next to stone cutter and carver Bryan Wilkinson (1718–1794). 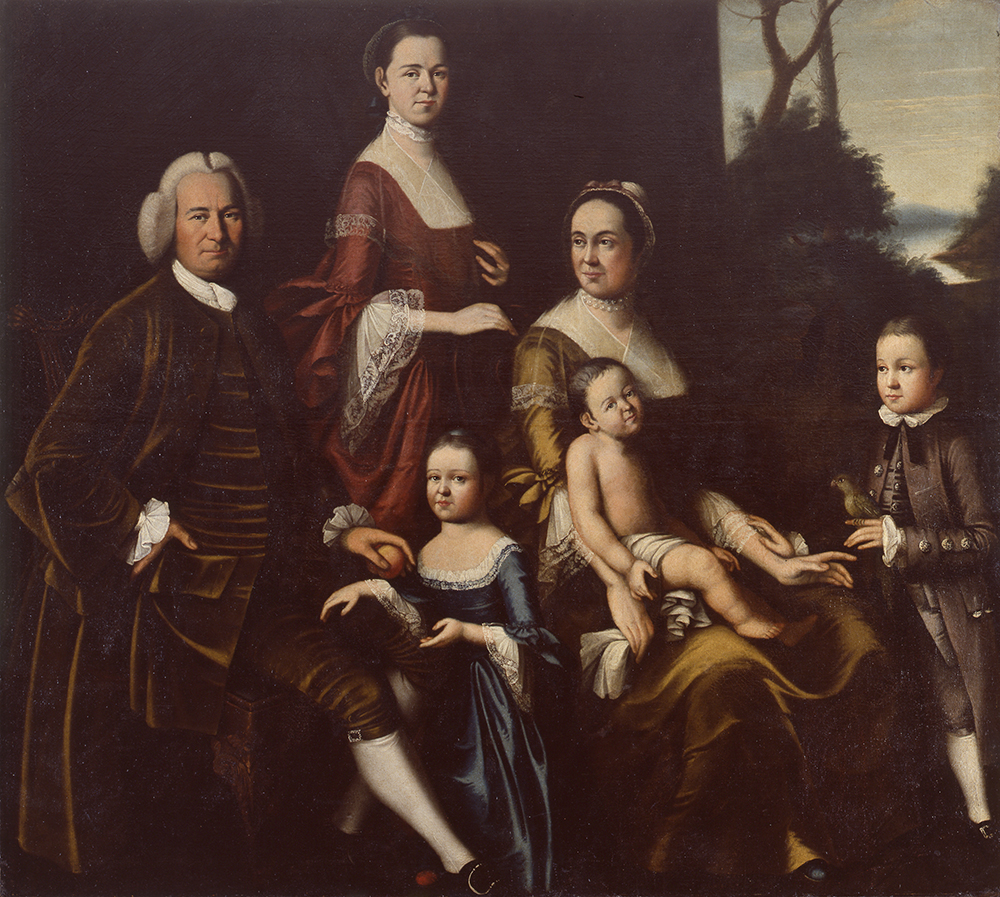 Ann’s half-brother by her mother’s first marriage, Henry Benbridge, painted a family portrait of Ann’s family when she was still a child, and, later, one of her sister Frances Gordon Edwards with her husband Enoch and their children. In the Gordon family portrait, Ann’s father, Thomas Gordon (1712–1772), and mother, Mary Clarke Benbridge Gordon (d. 1779), are seated on two different chairs—Mary on an earlier curved crest rail chair and Thomas on a chair of the same general form as the PMA’s, but decidedly not that chair.

Thomas Gordon’s 1772 probate inventory includes “5 old chairs, 5 Walnut chairs, 4 Chamber chairs, 5 Chairs”—and then the most expensive chairs, “1 doz. Mahogany Chairs.” (Notably, Thomas’s first wife was the daughter of joiner Thomas Stapleford [d. 1739].) The dozen mahogany chairs show up again in Mary Gordon’s 1779 probate inventory: “2 Mahogany dining Tables, 12 ditto Chairs.” As Ann Gordon was the beneficiary of her mother’s household goods and the co-executrix of her estate, she could have brought the chairs into her marriage to William McMurtrie in 1782. The chairs would then have descended to their son William McMurtrie (1787–1836) and his wife Elizabeth Coxe McMurtrie (1793–1875); to their daughter Elizabeth McMurtrie (1829–1903) and her husband George Archibald McCall (1802–1868); and finally to their son Richard McCall (1865–1934), who remained single all his life. While cousins and siblings may have had other chairs from the set, the one in Hornor’s Blue Book could have been purchased after McCall’s death on February 1, 1934, by Eleanor Cuyler Patterson, a single woman from a prominent Philadelphia family, whose ancestry does not seem to intersect with the McMurtries’.  It seems unlikely that she would have told Hornor that her chair was from someone else’s family if, in fact, it was from hers.

As exhaustive as provenance can be, it sometimes leaves us without a clear answer, reminding us that our visceral love for a work of art must often simply override the impulse to attach the name of an artisan or owner, just for the sake of having a name. 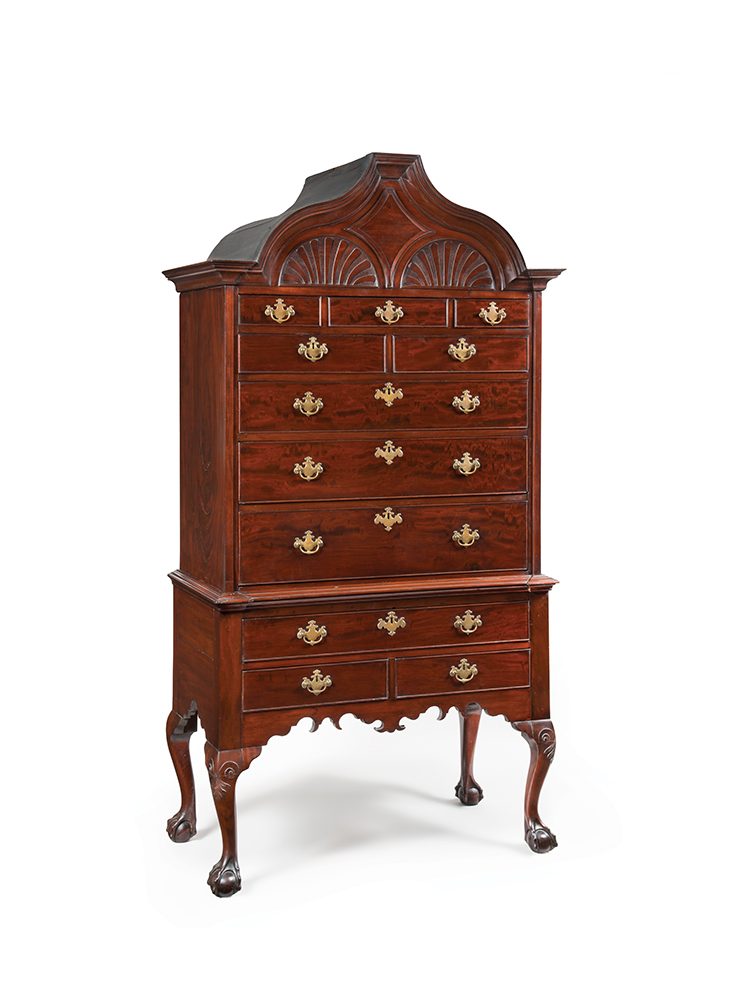 The Claypoole high chest: Tracking the movement of artisans

When the PMA acquired this high chest in 1998, the “Jos. Claypoole” signature and 1743 date inscribed on the bottom drawer of the upper case were thought to represent either Joseph Claypoole (1677–1741) or his son Josiah Claypoole, both joiners and scions of the prominent family who helped establish Philadelphia as the leading port for mercantile activity, especially in lumber and joinery.  Joseph reported in the Pennsylvania Gazette on May 18, 1738, that he “has left off his Trade; and has given his Stock and Implements

. . . to his son” Josiah. But Josiah was convicted of burglary from a silversmith and was forced to leave Philadelphia. He set out for Charleston, South Carolina, a city that enjoyed an active intercoastal trade with Philadelphia and was the birthplace of his father’s first wife, Rebecca Jennings (1680–1715). He advertised “Joyner’s and Cabinet-Maker’s Work, as Desk and Book Cases, with arch’d, Peidiment, or OG heads” in the South Carolina Gazette on March 22, 1739/40. 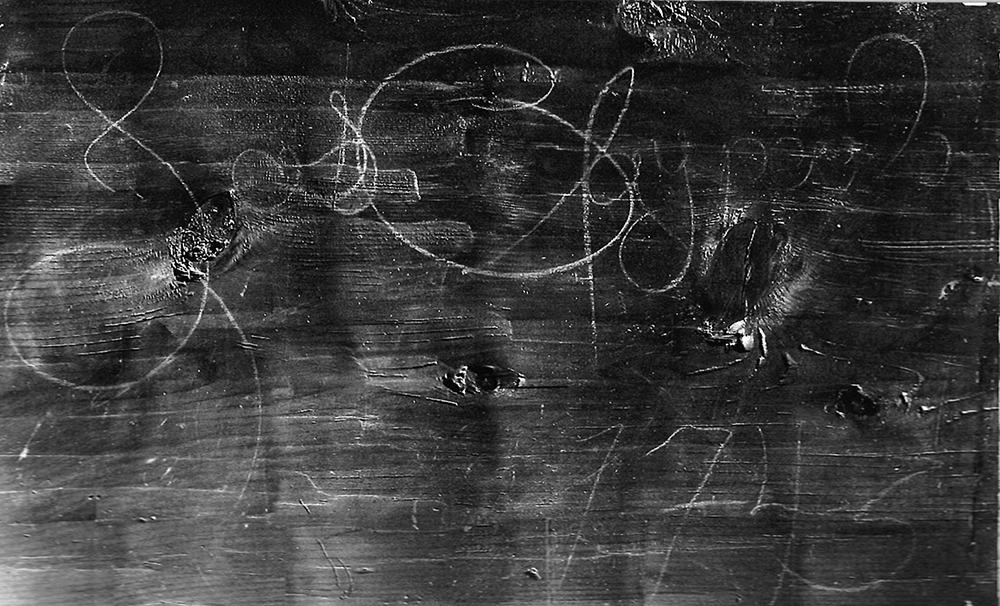 Claypoole’s signature and the date are inscribed on the underside of the bottom drawer of the upper case of the high chest. Gift of Martin A. Battestin.

The 1743 date on the high chest led to the surmise that possibly Joseph had returned to his bench after Josiah’s abrupt departure—or that Josiah had returned to Philadelphia for at least a brief period, although he is known to have spent the duration of his career in Charleston. Comparison to high chests and dressing tables made in Philadelphia between 1710 and 1790 indicates that the design—from the double ogee head to the quirky front rail to the use of black cherry as a secondary wood—is unconventional for Philadelphia. Probing the records with independent researcher and PMA volunteer James E. Gergat explained why: Joseph Claypoole’s will was proved in 1744, but burial records affirm that he died and was buried at Christ Church in February 1741. Thus, the signature and 1743 date on this high chest must be that of Josiah Claypoole—and the high chest was undoubtedly made in Charleston, not in Philadelphia after all.

* Space does not allow for full documentation here of the information in this article, but it will all be included in the final catalogue.