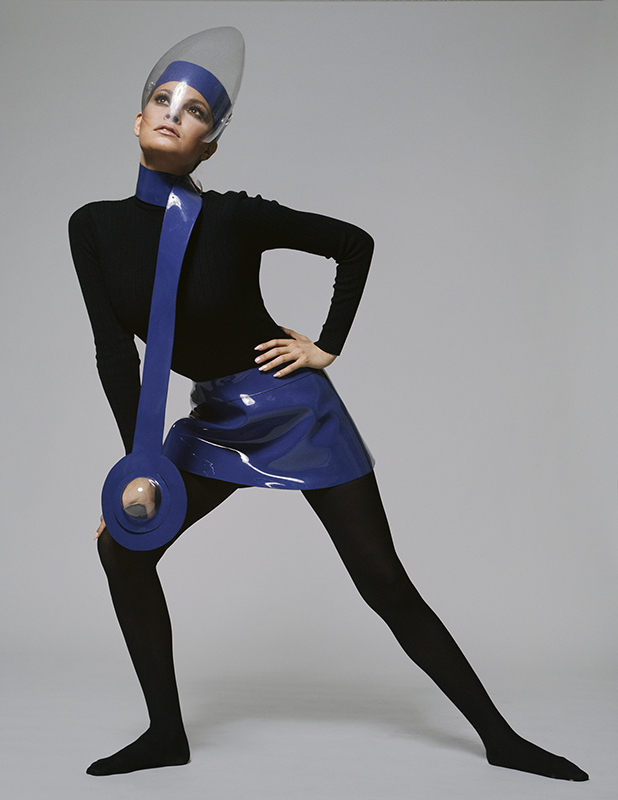 The French fashion designer Pierre Cardin once said: “The clothes that I prefer are those that I invent for a life that doesn’t exist yet—the world of tomorrow.” Though he has evolved and changed looks many times over the course of his long and continuing career, Cardin will always be associated with his avant-garde Space Age designs of the early 1960s—the sleek, body-hugging unitards; his simple, geometric silhouettes in vivid colors. To visit the new exhibition Pierre Cardin: Future Fashion at the Brooklyn Museum is to be immersed in a mod, cosmopolitan world populated by the likes of Brigitte Bardot, Alain Delon, Mia Farrow, and the models Twiggy and Jean Shrimpton.

Born near Venice, Italy, in 1922, the son of a French wine merchant, Cardin trained as a tailor in his teens in Vichy, France, and after the war honed his skills—Cardin is one of the few fashion designers who can actually cut and sew proficiently—in the atelier of Christian Dior. He opened his own fashion house in 1950, and in 1958 became the first member of the French couture syndicate to launch a ready-to-wear line.

The Brooklyn Museum show features some 170 items that include not only clothing but also jewelry, furniture, lighting, and eyewear. The strongest theme that emerges is Cardin’s unending faith in technology. He was one of the first couturiers to embrace synthetic fabrics and even invented one of his own—a moldable, shape-holding textile called Cardine. Fascinated by the U.S.-Russian space race, he even paid a visit to NASA for inspiration in 1969. The opening of the Brooklyn exhibition—which is ticketed and timed—has been set to coincide with the fiftieth anniversary of the Apollo 11 moon landing. Blast off.

Pierre Cardin: Future Fashion is on view at the Brooklyn Museum from July 20 to January 5, 2020