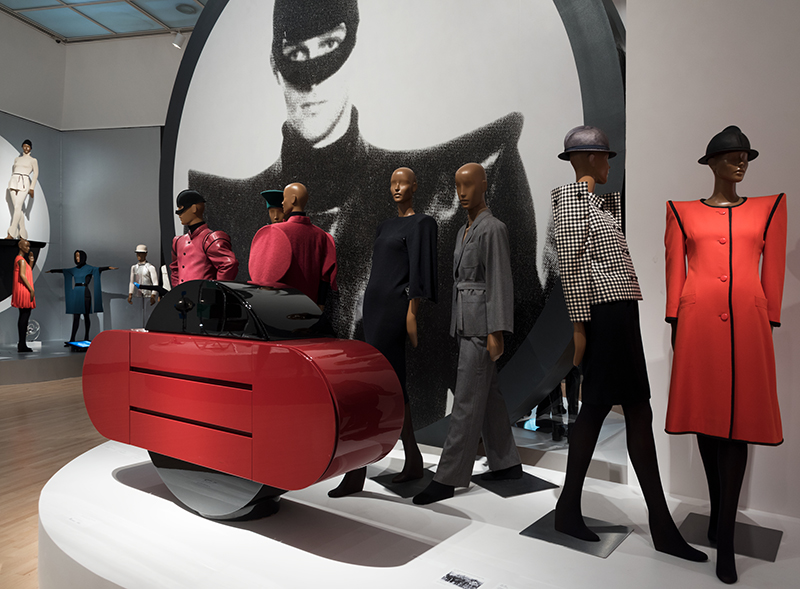 In his fashion work, designer Pierre Cardin sought to remake the human body in his sculptural ideal. He ringed women with parabolas, shrouded them in stiffened silk and lamé frills that made them look like shimmering cephalopods, or slipped sequined handbags as big as manhole covers onto their arms. The Frenchman’s furniture, though much less well-known and harder to find than his couture, responds to the same sculptural impulse, as examples on view as part of the Brooklyn Museum’s exhibition Pierre Cardin: Future Fashion attest.

“I like to work as a sculptor; it’s my life, my passion, my happiness and my joy,” he told Design Scene in 2017. While an early 1970s collaboration with the designer François Cante-Pacos yielded a suite of relatively staid designs, including the black side chair and bureau in the current exhibition, later in the decade, function was totally subsumed by the seduction of form. A showstopper chest of drawers, as sleek and shiny as Japanese lacquer, combines two simple shapes: a rust-red oval and a black circular form. In another piece, a freeform stack of drawers is suspended within a ring of chrome. Cardin’s forays into industrial design yielded hot pink television sets shaped like pyramids, and acrylic lighting fixtures that look like glowing props from a 1980s science-fiction movie.

The sci-fi element is strong throughout the exhibition, and its opening was timed to coincide with the fiftieth anniversary of the first moon landing. The space race had a strong influence on Cardin’s design sense, and he even visited NASA once for inspiration. Who knows, perhaps one day the nonagenarian designer—who pioneered the practice of licensing his name for a diverse array of products, including airplanes—will put his name on a brightly colored rocket that will share his exuberant style with the rest of the solar system.