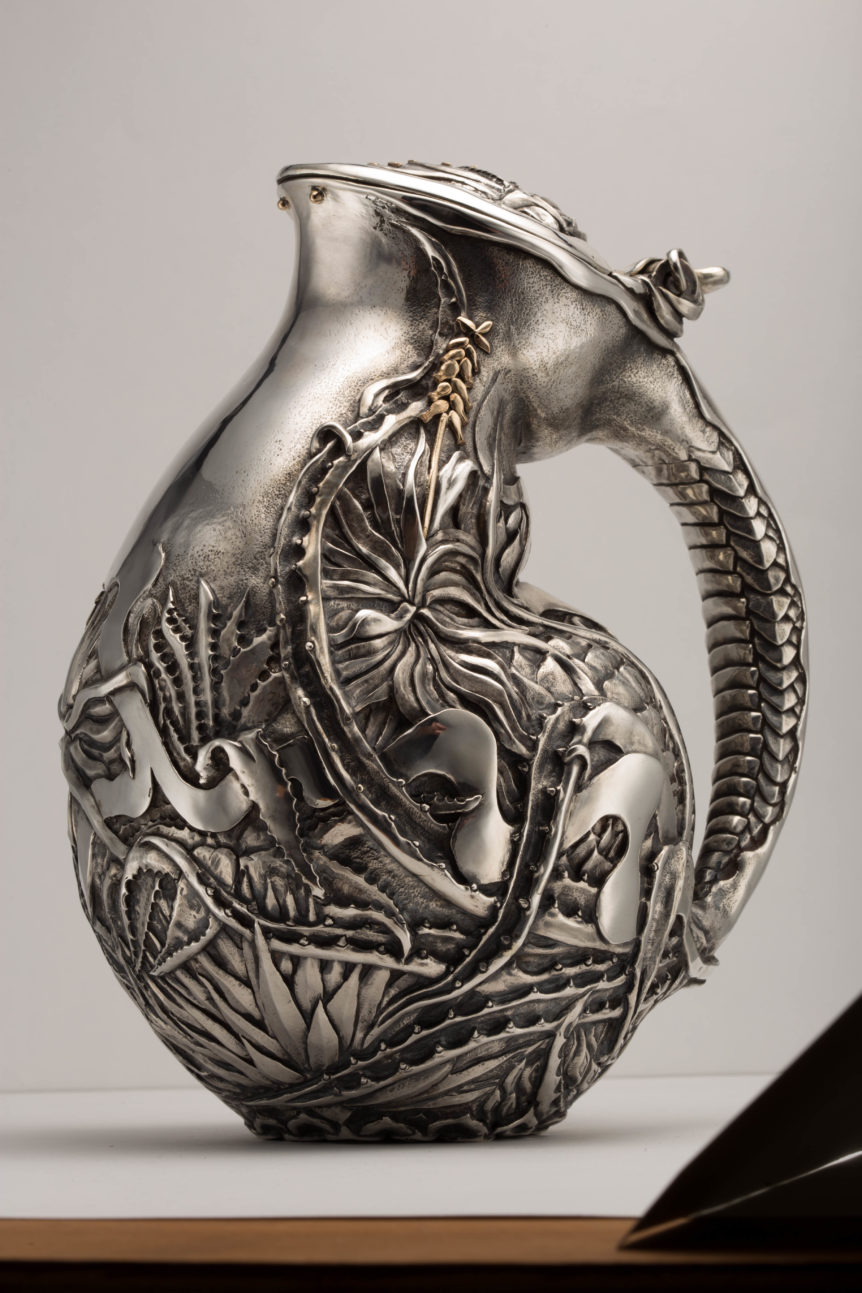 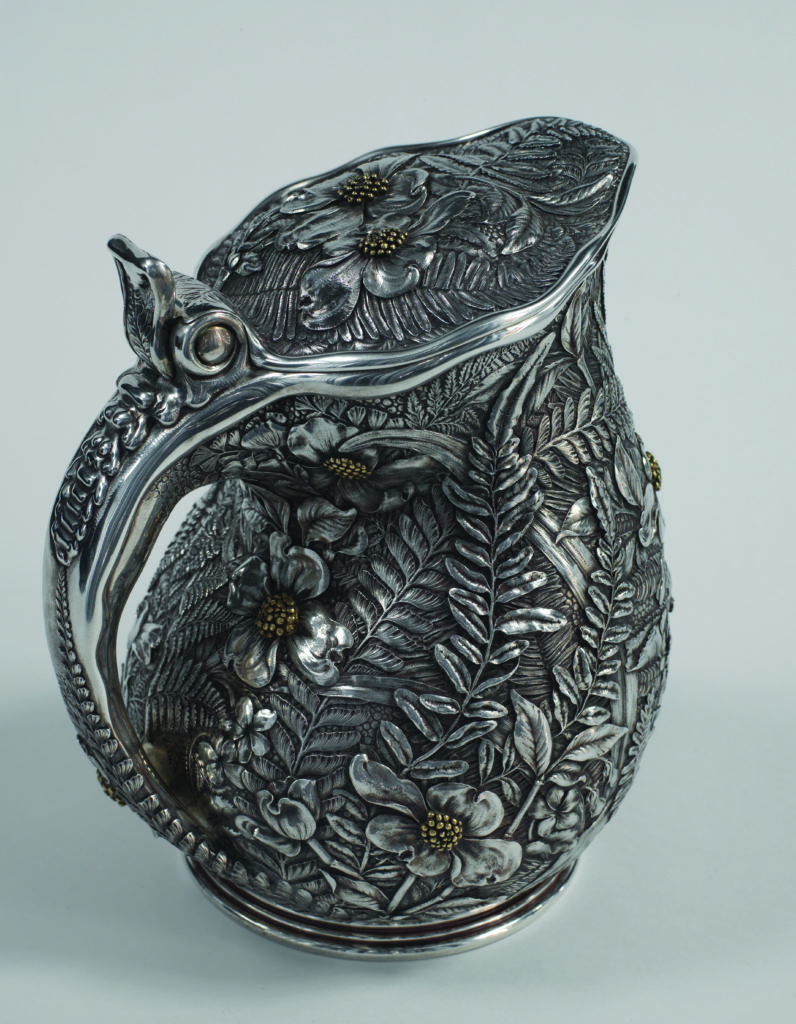 Tucked away in East Harlem, the Museum of the City of New York is a lesser-known treasure: an institution with a rare knack for bringing the history of New York to life in unexpected and imaginative ways. The exhibition New York Silver, Then and Now, on view through June 2018, is a good example. The MCNY has an important collection of historical silver, and has long wanted to show it off. How to do that in an exciting and educational way was the challenge. Even if the pieces on exhibit displayed spectacular craftsmanship, and many of them do, the museum worried they would likely be seen as “your grandmother’s silver” by museumgoers—no matter how notable the maker, or owner, of a piece might be, nor how exceptional its condition. So the MCNY employed a strategy that some of the world’s top antiques fairs have utilized in recent years: presenting contemporary works under the same tent as period pieces to spark a conversation between the two, and to engage visitors in new ways. 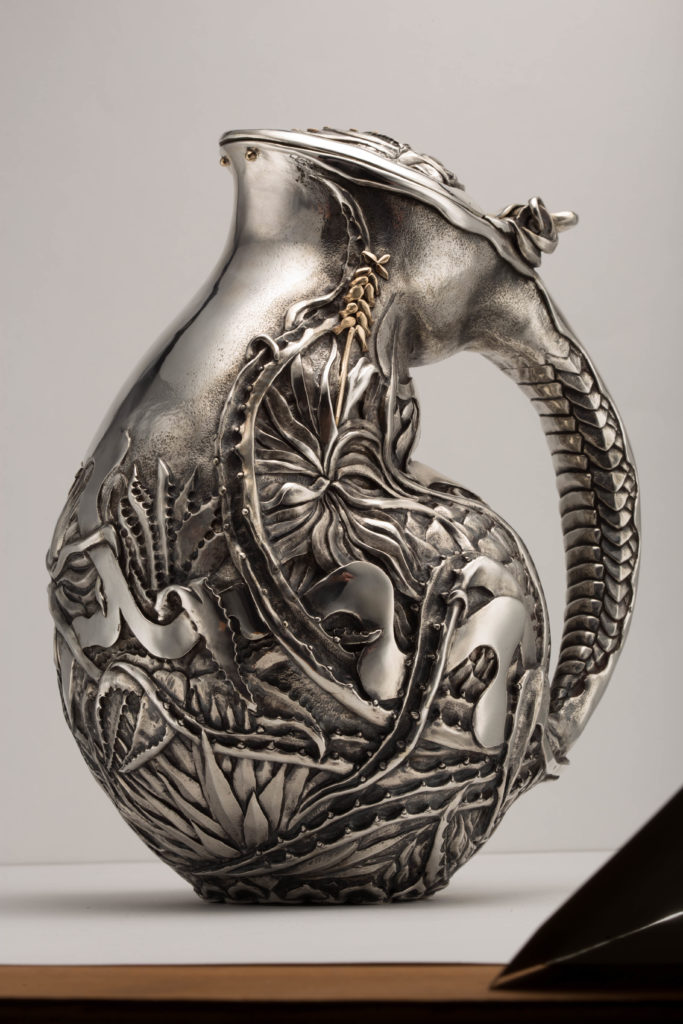 Fig. 2. Agave Pitcher by Preston Jones (1987–), 2017. Silver, forged, raised, repousséd, and chased; height 11 inches. Courtesy of the artist and the Museum of the City of New York; photograph by Paul Grossmann.

The museum commissioned twenty-five leading artists, designers, architects, and metalsmiths in the New York area to explore the collection and, each in response to a particular piece, create a new silver object for the exhibition. It was hoped that such a dialogue would bring the historical silver and the role these objects once played into sharper focus for museumgoers, while also revealing something about the lens through which we today view history. And so it does. In addition, the exhibition proves that virtuosic traditions of New York silversmiths endure in this digital age. 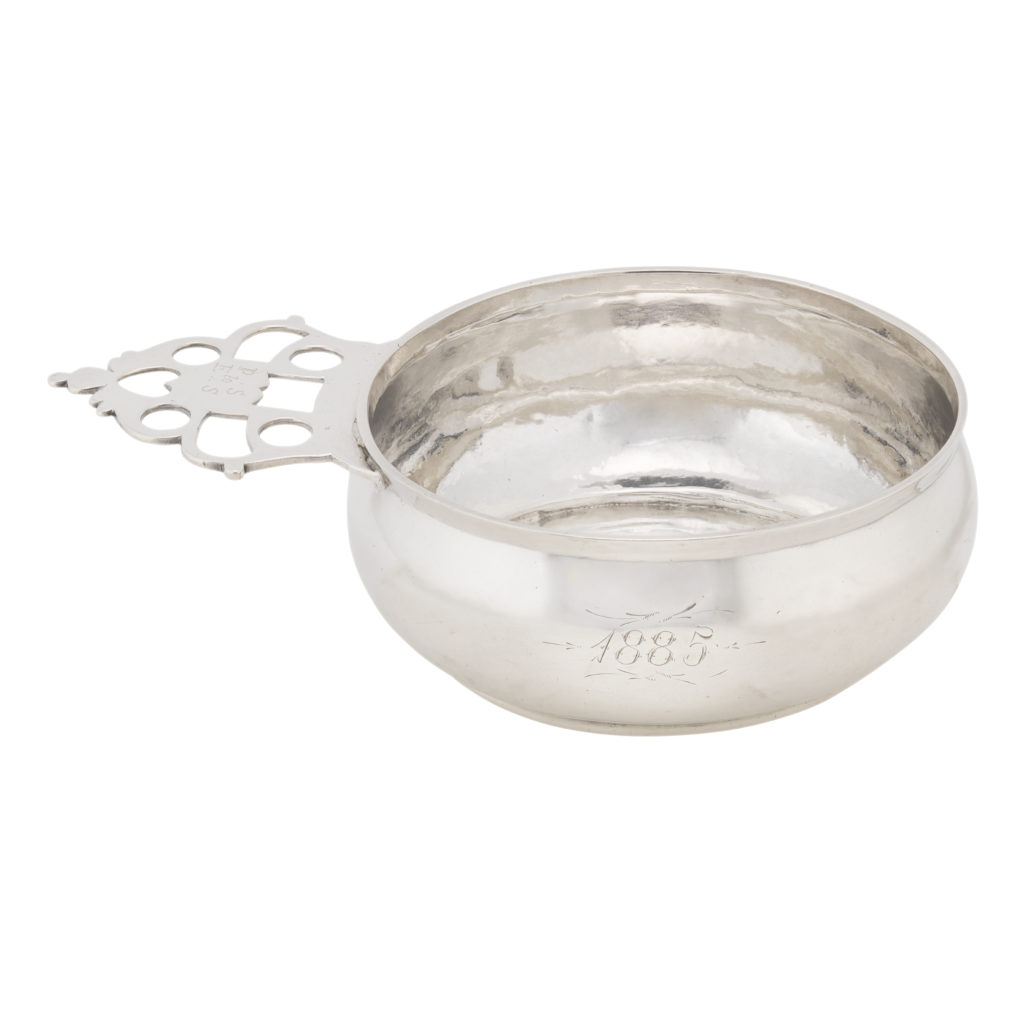 The show has been installed in a jewel box of a gallery, its compressed dimensions reinforcing the compression of time. The very walls interweave past and present, as large expanses are covered in swathes of Victorian-style burgundy-hued velvet brocade, cleverly accented by a contemporary black-and-silver wallpaper, designed by the Harlem-based decorator Sheila Bridges, its lacy X-like pattern inspired by the intricate openwork handle of an early eighteenth-century porringer by the silversmith Peter Vergereau. 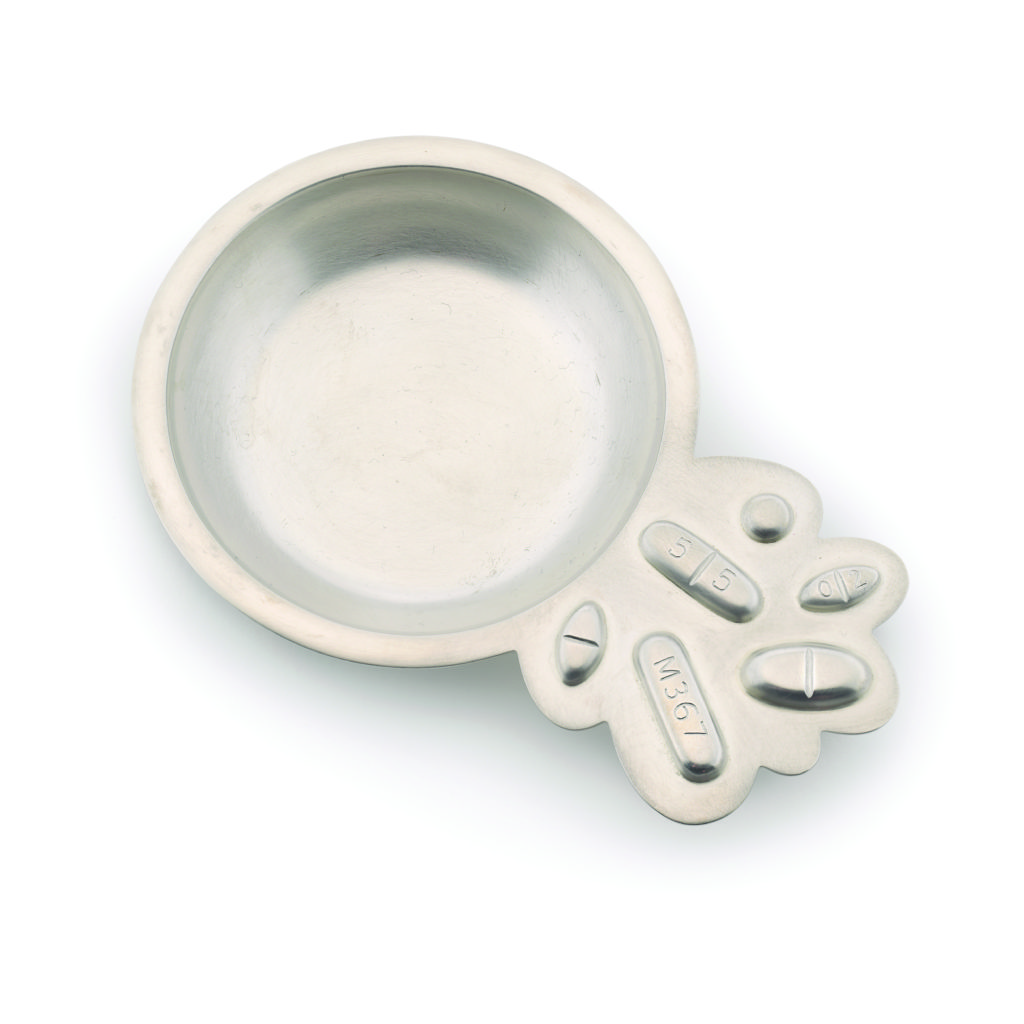 That pretty porringer was once a common table implement used at meals as a server or a bowl for individual portions of food or drink (see Fig. 3). It prompted Constantin Boym, the mischievous Russian-born industrial designer, also the chairperson of industrial design at Pratt Institute, to muse about how table implements come and go as our dining habits change. Today, so many New Yorkers begin their day by swallowing prescription pills or supplements that he decided to make (with the aid of the Charleston, South Carolina–based silversmith Kaminer Haislip) a “pillinger,” a handy and handsome container for one’s daily capsules, with various tablet shapes adorning the handle (Fig. 4). 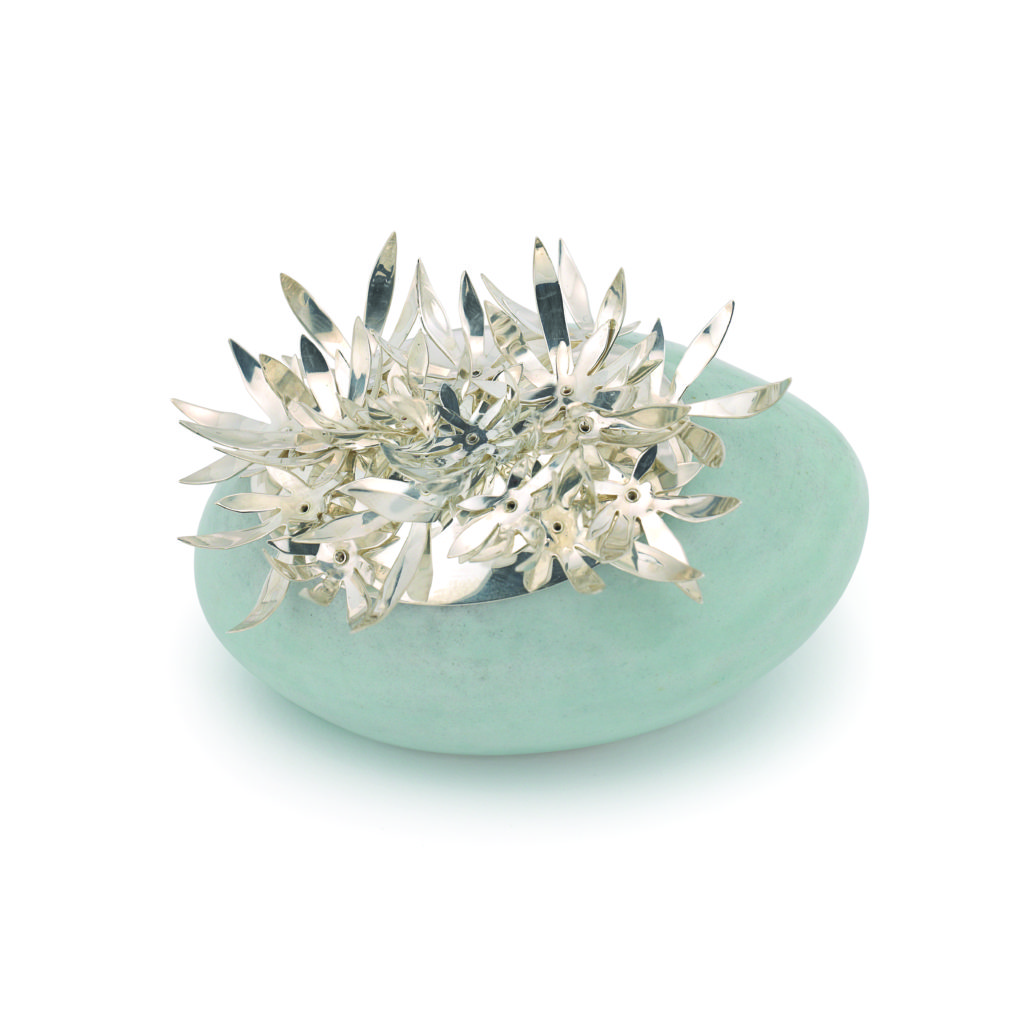 Boym’s partner in life and design, Laurene Leon Boym, saw contemporary correspondences in another anachronistic vessel, the snuffbox, once used to store finely ground tobacco that was inhaled for what was considered a pleasing medicinal high. The historical example on display is surprisingly inventive: a cowrie shell holds the snuff and is secured with a silver lid that flips open. Of course, today we New Yorkers shun tobacco in all its forms, but we do recognize the benefits of medical marijuana, which is why Boym responded by creating a palm-size vessel for marijuana florets, or “nugs” (Fig. 5). 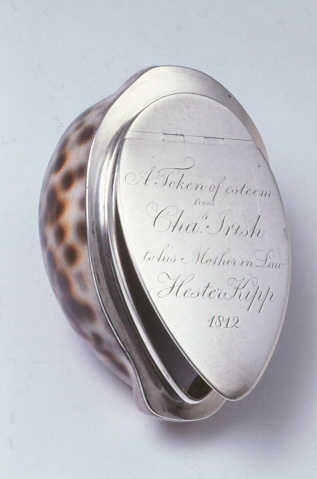 “It wasn’t the chance to develop a new typology—a fusion of virtu and paraphernalia—that attracted me to this project,” says Laurene Leon Boym, with a laugh. “Instead, it was the opportunity to have an experience with this amazing material.” She is a friend of the downtown designer/artisan Ted Muehling, who is something of a silver master and is represented in the show by three exquisite objets d’art. Muehling invited her to observe things in his studio for a few weeks, and learn about silver fabrication from himself and his production assistant, Tim Seiber. “Ted was my Obi-Wan Kenobi,” Boym says. What she produced is a 3-D printed ceramic egg-shaped box in a cheeky pale celadon blue, with a delicate flowery silver nug as the lid, which she forged and stamped. So pleased is Boym with her creation, she intends to produce a limited edition of eight. “Antiques of the future,” she jokes. 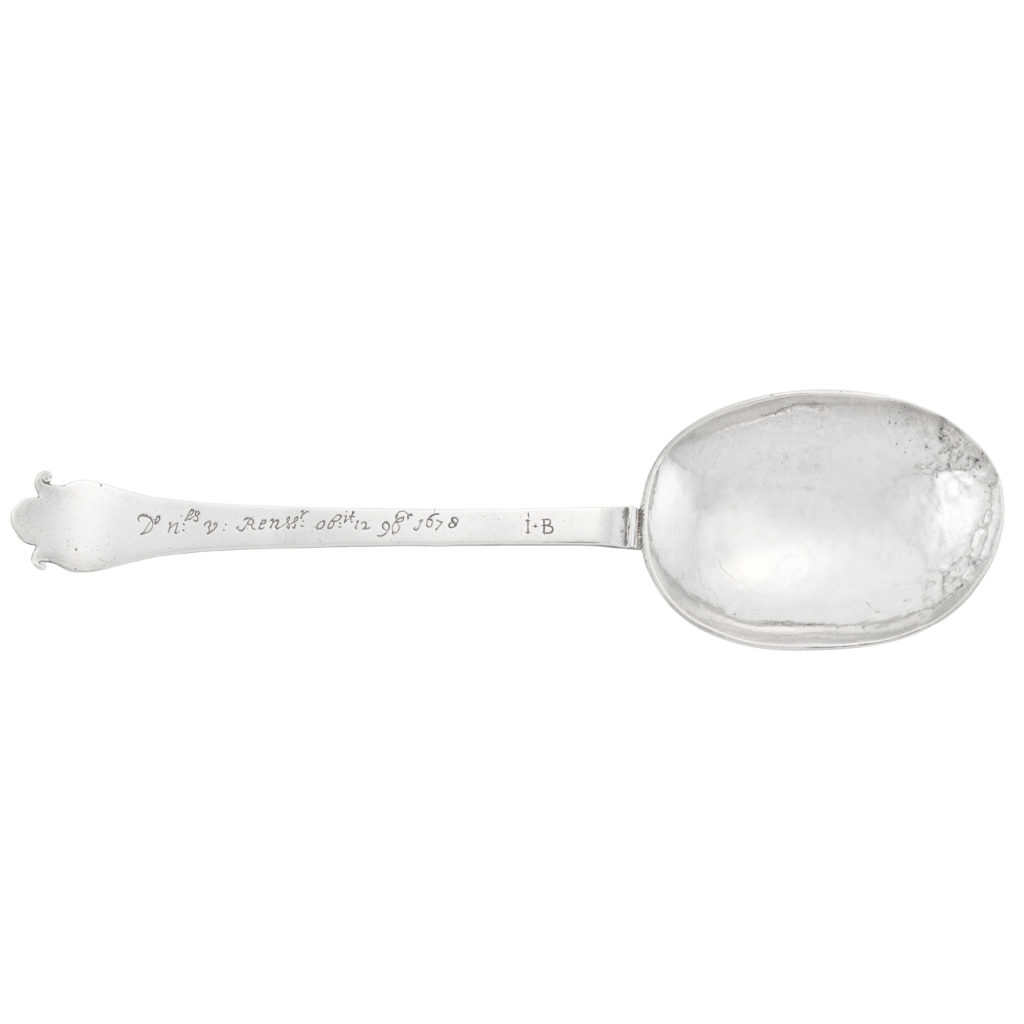 “I had something to prove,” says the young silversmith Preston Jones, who works for Tiffany & Co. “To sit with today’s leading silversmiths and dissect some of the most intricate works owned by the museum was an experience in itself,” he says. “My goal was to make something that stumped future generations of silversmiths. I wanted to leave something behind that would inspire similar arguments about its construction.” 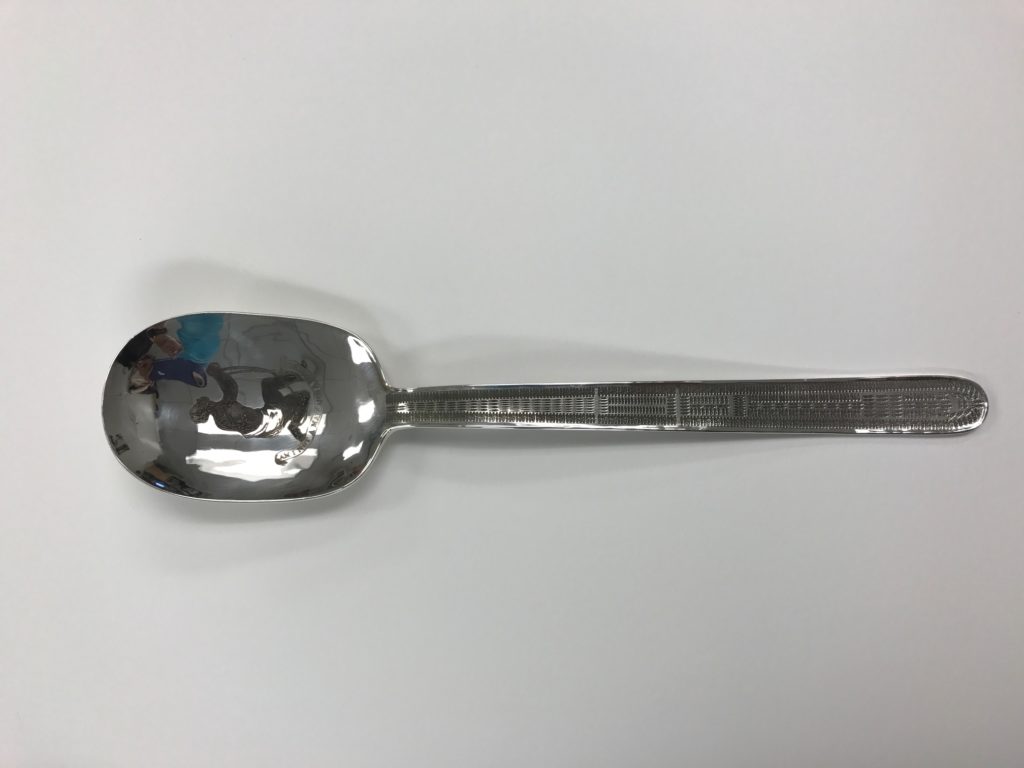 As his reference point, Jones selected an Askos pitcher made by Tiffany & Co. in the 1870s—an extraordinary work densely embellished with a chased and repousséd design of dogwood blossoms and ferns (Fig. 1). Jones created a pitcher for pulque or mescal drinks adorned with luscious depictions of various agave species, their forms swollen in places as a nod, he says, “to old wineskins” (Fig. 2). The handle is in the shape of a serpent, a reference to the Aztec goddess Mayahuel, the personification of the agave plant. It is a tour de force. 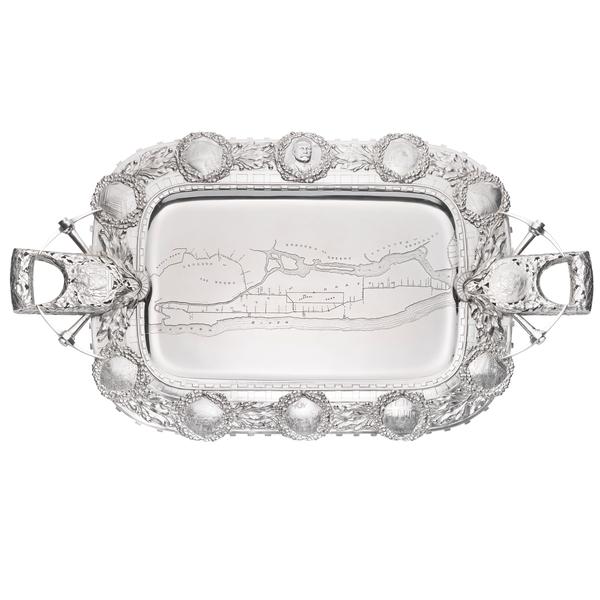 When surveying the contemporary silver pieces, it’s fairly obvious that social commentary is the lingua franca of New York’s creative class. Some of the pieces, like those of the Boyms and Jones, are witty, while others are freighted with darker truths. For example, one of the oldest objects on display is a seventeenth-century memorial spoon (Fig. 7). Distributing specially inscribed memorial spoons to pallbearers at a funeral was an old Dutch custom that spread to New York City and throughout the Hudson Valley. Sheila Bridges, in her other creative contribution to the show, conceived a mourning spoon of her own, which she titled Tarnish (Fig. 8). It memorializes the many African slaves transported to South America, the chief source of silver in colonial times, to serve as forced labor in mines. Fabricated by the silversmith Susan Kay Walker with a CAD design by Woody Tony, the spoon features two images made famous by British abolitionists. The handle is laser engraved with the historical plan of a 1788 slave ship that illustrates the hellish efficiency of stowing captured Africans like cargo; the back of the spoon’s bowl portrays a crouching slave with the words: “Am I not a man and a brother?” 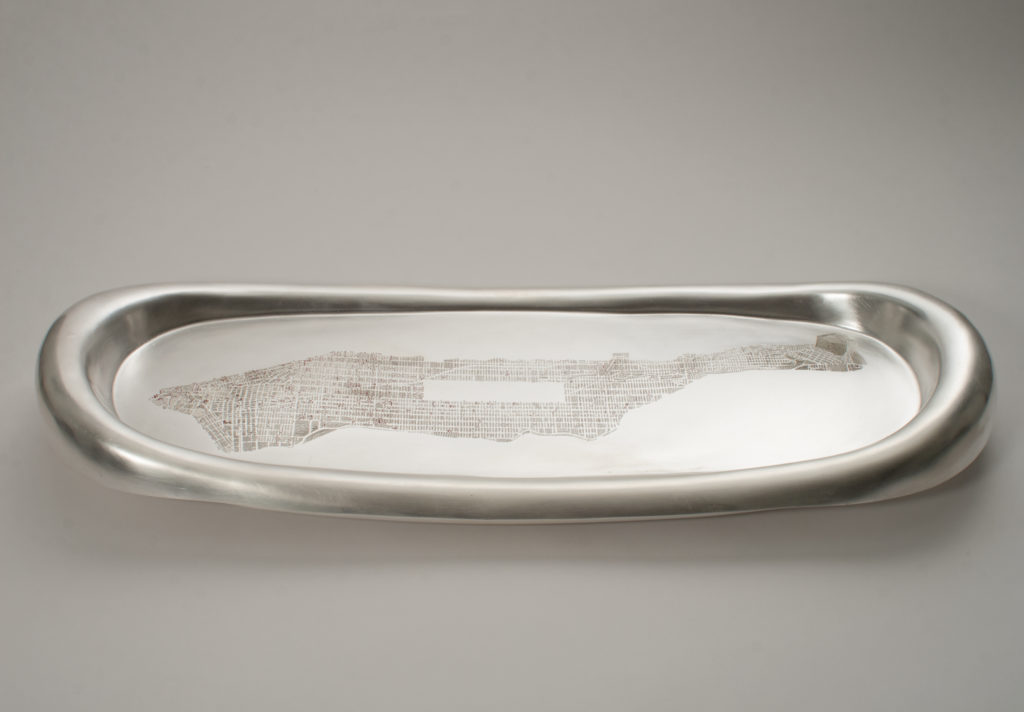 Another historic work that prompted acerbic commentary is a silver presentation tray made in 1904 by Tiffany & Co. to celebrate the opening of New York’s first subway line; a fabulous work elaborately engraved, chased, and cast with excavation tools and images of the activities involved in its construction (Fig. 9). In response, the digital designer and metalsmith Michael Gayk forged a silver-plated and engraved silicone bronze tray as an ironic commemoration of the installation of roughly seventeen thousand surveillance cameras along the streets of Manhattan (Fig. 10). Oh, how times have changed! 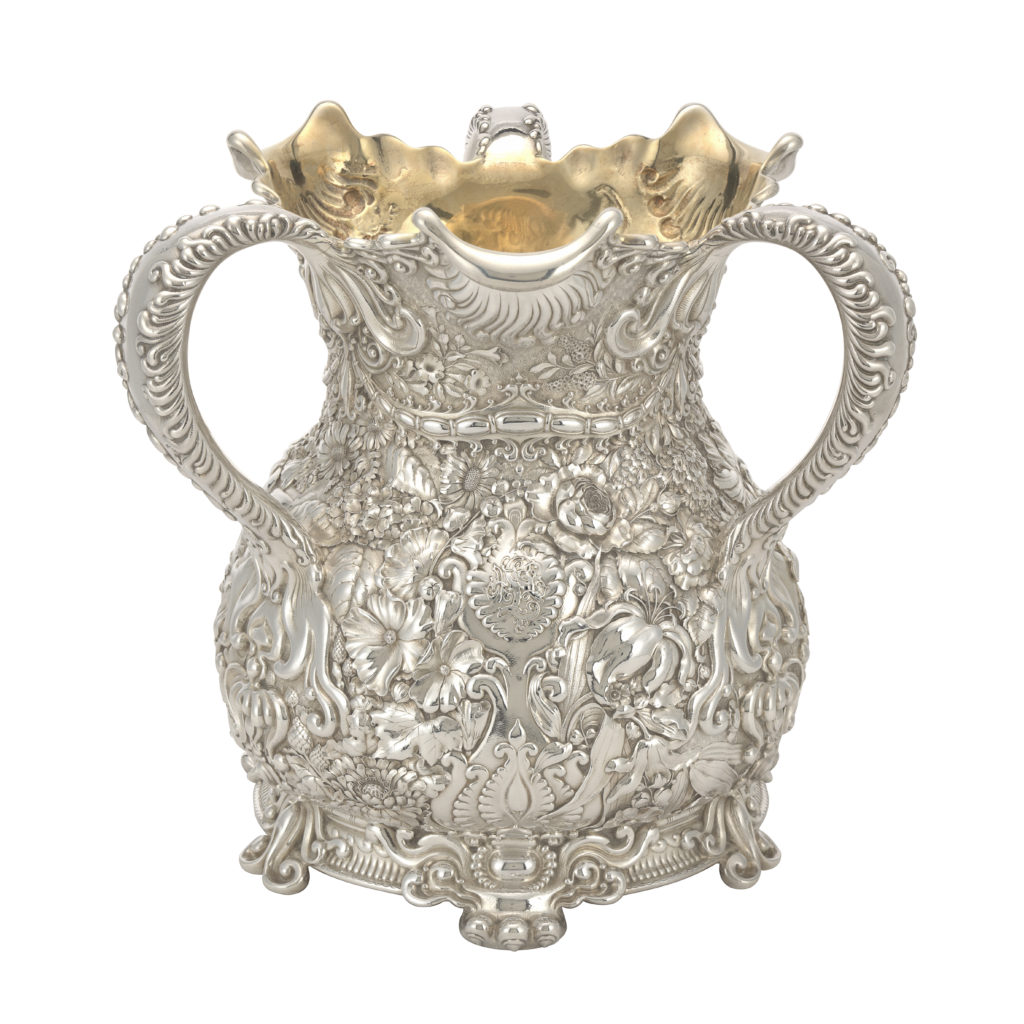 Perhaps the work that best exemplifies not only the triumphant skill of New York’s contemporary craftsmen but also their bonhomie is one by the Brooklyn-based metalsmith Brian Weissman. Impressed by the ebullient ornament on a late nineteenth-century Tiffany loving cup—a bygone vessel once given as a gift to an individual or group for shared imbibing—Weissman fashioned a similarly shaped object out of a dizzying array of dry macaroni pieces, which he formed in wax and cast in bronze before silver plating (Figs. 11, 12). He calls it a “pasta-loving cup.” What newfangled dining implement could be more New York than that? 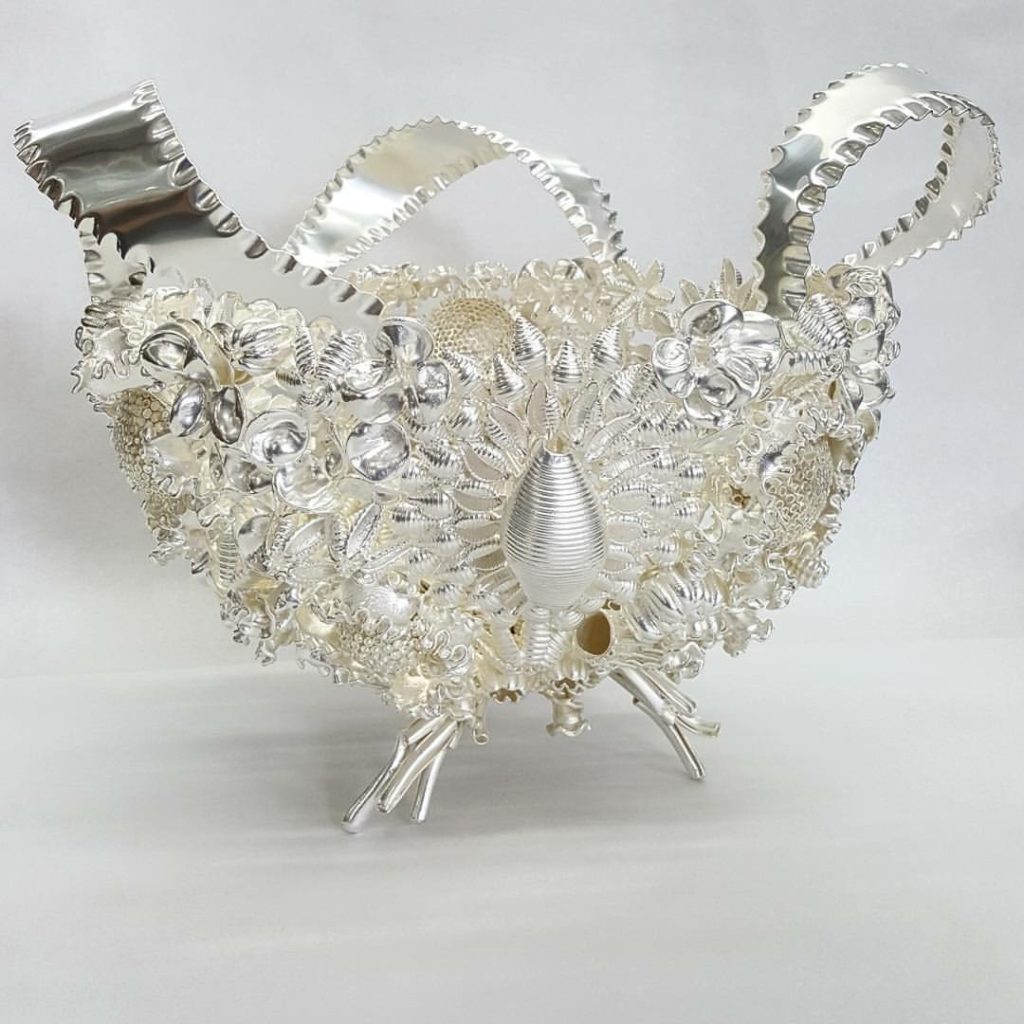 Fig. 12. Pasta-loving cup by Brian Weissman (1976–), cast by Daniel Jewelry Casting, 2017. Pasta shapes, formed in wax and cast in bronze before silver-plating; height 18, width 14, depth 14 inches. Courtesy of the artist and the Museum of the City of New York.