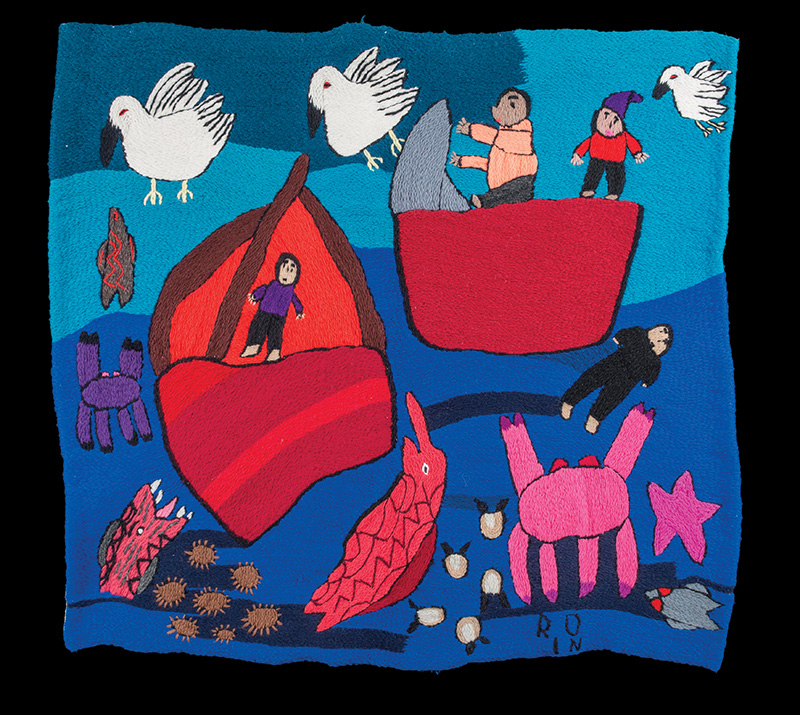 At first glance, one might mistake El barco hundiéndose en alta mar for a sweet embroidery sampler, complete with larger-than-life birds and sea creatures in brilliant blue waters. But the scene depicted is actually a tragedy. The title of the work translates from Spanish as Boat Sinking on the High Seas, and what’s shown is the drowning of a Chilean refugee.

El barco is featured in Sewing Stories of Displacement, presented by the Museum of International Folk Art in Santa Fe, New Mexico, and featuring textile artworks made by people displaced from their homes by conflict and political upheaval. Nearly all date from the 1970s to the ‘90s, and come from places that range from Guatemala, Chile, and Peru to South Africa, Vietnam, and Pakistan.

For readers of this magazine, needlework is a familiar medium for sorrow—seen in the stitched weeping willow trees and gravesites of nineteenth-century mourning embroideries. But there is an extra layer of poignancy in the works at MOIFA, made by people trying to understand the colossal forces and events that have overwhelmed them and their families. El barco, for example, was stitched by the drowned man’s niece. “The embroiderers are all marginalized people who had never before done anything artistic, but are indeed artists,” says the show’s curator, Martha Manier. “The simplicity with which their stories are told allows for everyone to relate because, in a sense, we have all experienced something similar, whether directly; through the accounts of family, friends, and acquaintances; or, now, though global media.”

Sewing Stories of Displacement was originally scheduled to run until September 27 at the Museum of International Folk Art, Santa Fe • internationalfolkart.org