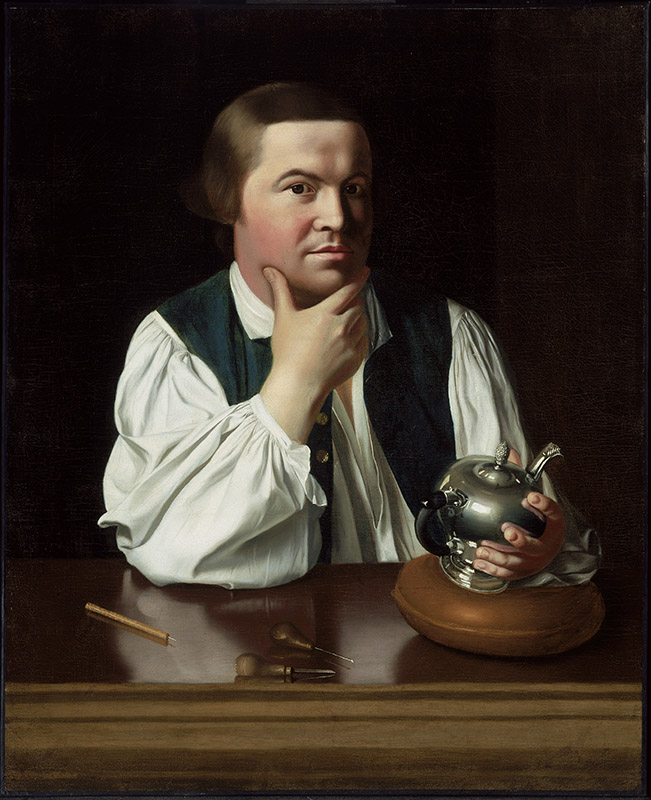 “Listen, my children, and you shall hear/ of the midnight ride of Paul Revere”

The name Paul Revere invariably evokes Henry Wadsworth Longfellow’s 1860 poem immortalizing the famed midnight ride. But that legendary gallop overshadows Revere’s many and varied achievements as a patriot, craftsman, innovator, and entrepreneur. Revere ran multiple businesses in and around Boston, including a silver shop, a furnace first for casting iron and later for casting bells and cannons, and an industrial copper-rolling mill. His versatility, entrepreneurship, and his ever-expanding network of clients defined his career and secured his place among craftsmen, industrialists, and civic leaders who worked to make the young American nation independent economically as well as politically.

The exhibition Beyond Midnight: Paul Revere, organized by the American Antiquarian Society, aims to shine a light on Revere’s lifetime of achievement. Unlike most artisans of the period, Revere’s life has been well documented. His account books, letters, and business records were saved by descendants due to his patriotic renown. As a result, scholars today can use Revere’s example to understand more broadly the lives and practices of American craftsmen during the Revolutionary period and the early years of the new republic. Revere is at once unique—enshrined in our national consciousness as the quintessential patriot—and ordinary: a representative of the struggles and successes experienced by many American artisans. He worked for fifty years in his bustling Boston shop and in his copper-rolling mill in Canton, Massachusetts, alongside apprentices, journeymen, other shop workers, and family members from the 1760s through 1811. Revere produced a wide range of products for customers from all economic strata, ranging from bookplates for merchants (Fig. 4) to fluted silver spoons for country politicians like Nathaniel Gilman of Exeter, New Hampshire. He also made bells for churches and courthouses, rolled copper to sheath the ships in the newly formed US Navy, and engraved official currency and bills of credit for the Provincial Congress of Massachusetts.

While much has been written about Revere’s work as a silversmith, less attention has been given to his work as an engraver of copperplates. Clarence S. Brigham’s Paul Revere’s Engravings (1954) remains the most comprehensive study of Revere’s engravings but does not consider his work in the larger context of Revere’s output as an artisan. Nor does his study analyze Revere’s own style and his development in ability and proficiency as an engraver. Revere’s first copperplate engravings were an outgrowth of his work embellishing silver wares. His earliest copperplate, which is known by only one impression, is an artilleryman’s enlistment certificate for Boston’s North Battery of about 1762, which features a simplistic view of a stone fort and an awkwardly depicted wharf, with the North End of Boston in the distance (Fig. 6).

Eight years later, in 1770, Revere produced his best-known engraving: a scene of the Boston Massacre that occurred in front of the Massachusetts State House that year. Hand-colored versions of The Bloody Massacre Perpetrated in King Street Boston on March 5th 1770 were for sale in area shops just three weeks after the event and circulated widely (Fig. 1). Revere’s image was so provocative it may even have been carried onto the battlefield. The scene was inscribed (in reverse) in 1772 on the powder horn of one Hamelton Davidson by the prolific horn carver Jacob Gay (Fig. 5).

Revere’s massacre engraving is considered one of the most successful propaganda prints in American history. He copied the design from another Boston-area artist, Henry Pelham (1749–1806), whose version hit the market a week later. This pair of prints is shown in the exhibition, along with three other versions of the massacre produced in or around 1770: a rare broadside version printed from the same copperplate as Revere’s print by Edes and Gill in Boston; an engraving copied after Revere’s design by Jonathan Mulliken, a clockmaker in Newburyport, Massachusetts; and a British version, which blends the Pelham and the Revere originals, produced in London a couple of months after the massacre by bookseller William Bingley to accompany a pamphlet he published on the events in Boston. This will be the first time all five early printings of the Boston Massacre are shown together.

The exhibition also brings together for the first time Revere’s two most significant commissions in silver, a forty-five-piece tea set made for Dr. William Paine of Worcester, Massachusetts, and his new wife, Lois Orne, in 1773 (Fig. 7) and an eighteen-piece silver tea set made for Boston merchant John Templeman and his wife, Mehitable, in 1792 (Fig. 3). A comparison of these pre- and post-Revolution tea services allows viewers to see the changes in design and production methods Revere made as he kept up with changes in taste and style in the nearly two decades that separate the sets. To craft fashionable neoclassical-style wares during the last two decades of the eighteenth century for clients like Templeman, Revere and his workers used sheet silver, which could be cut to shape and seamed for many of the forms, rather than employing the more costly and labor intensive process of raising hollowware, as for the Paine service.1 The fluted oval teapot, one of the most familiar silver forms associated with Revere’s shop, was nearly exclusive to the Boston area and has become an iconic Federal-period silver form. Revere adapted readily to the stylistic desires of his clients and boldly experimented with the latest technology, taking risks and tackling setbacks along the way. He was also savvy enough as a businessman to avoid letting politics get in the way of sales. The largest silver commission of his career was the tea service made for Paine, a Loyalist who served as physician for British forces during the war.2 The set was made just two months before the Boston Tea Party in 1773, an act of rebellion that Revere, as one of the Sons of Liberty, helped plan and execute.

Revere’s elegant silver services constituted only part of his output as a prolific artisan. His ability to survive amidst political instability and an uncertain economy stemmed from his shrewd business acumen. Early in his silver-making career he produced a wide range of lower-end articles to sell to customers on various economic levels. For every piece of expensive hollowware that Revere made, he produced five small flatware items such as spoons—products that could easily be made by apprentices and hired labor.3 His shop also produced a large quantity of personal items such as shoe and knee buckles, buttons, and rings, and miscellaneous items such as children’s whistles, masonic medals, and thimbles. Revere recognized that taking on menial tasks such as repairing items and making spoons helped cultivate clientele and could lead to future commissions, contributing to the overall financial stability of the shop.4

Critical to Revere’s success was his extensive social network. His customer base included his extended family and friends, local craftsmen, fellow Freemasons, and other patriots. Subcontracting alliances with fellow craftsmen helped facilitate sales of a variety of products and services from his shop, including silver and plated harness fittings such as stirrups, spurs, saddle nails, and bridle buckles. As an active Freemason, Revere belonged to a lodge full of potential customers, including community leaders and members of the merchant class. The web of relationships created by his masonic connections prompted commissions for engraved notifications from lodges as far away as Suriname, also known as Dutch Guiana. The appropriation of Revere’s design for a Newburyport masonic notification on a Chinese export porcelain punch bowl further suggests how his work circulated to distant lands.5 New England sea captains likely carried masonic documents that reached Chinese artists in porcelain factories, where the imagery was copied on wares that were then sold back to the Americas. Punch bowls like the one with Revere’s masonic designs were typically used for refreshments at lodge meetings (Fig. 9).

An important member of Revere’s network was Isaiah Thomas, publisher of the radical Massachusetts Spy newspaper. Thomas’s background was similar to Revere’s, in that he was a striving artisan of the mechanic class, a patriot, and a masonic brother. He received no formal education (Revere had received only a little), but succeeded in his trade through his own initiative. In addition to other commissions, Thomas enlisted Revere to engrave the mastheads for the Massachusetts Spy. His 1774 masthead was made in response to the Intolerable Acts enacted by Parliament to punish Boston residents after the Boston Tea Party. A serpent divided into nine segments represents the colonies (New England makes up the head) who must join together when they encounter the dragon of tyranny.

The constellation of Revere’s various products assembled in Beyond Midnight: Paul Revere highlights the versatility and diverse output of a Revolutionary artisan whose business archive and wares were saved and treasured because of his fame for an altogether different achievement. The midnight ride that became synonymous with Revere’s name has been interpreted by generations of artists (Fig. 10). Revere could not have anticipated that he would occupy an exalted place in American history as a legendary hero of the Revolutionary War. After his death in 1818, he was remembered mainly as a successful regional businessman. His son’s expansion of the family copper mill kept the Revere name and its association with copper intact for another generation. But it was Longfellow’s 1860 poem, not his metallurgical know-how, his innovative technologies, or his engraved designs, that immortalized Revere’s name and shaped the nation’s collective memory of him. This exhibition hopes to provide a glimpse—beyond the ride—of the artisan who navigated the rocky road of production and commerce in pre- and post-Revolutionary America with grace.

Beyond Midnight: Paul Revere will be on view at the New-York Historical Society from September 6 to January 12, 2020, and will then make stops at the Worcester Art Museum and the Concord Museum in Massachusetts and at the Crystal Bridges Museum of American Art in Bentonville, Arkansas.

1 Janine Skerry notes that though the fluted teapot could be seamed, tapered forms in the Templeman set such as the sugar urn and creampot could not be fabricated by seaming a rectangle of sheet silver into a cylinder and thus had to be hand-raised. Janine Skerry, “The Revolutionary Revere: A Critical Assessment of the Silver of Paul Revere,” in Paul Revere: Artisan, Businessman, and Patriot: The Man Behind the Myth (Boston: Paul Revere Memorial Association, 1988), p. 53. 2 Jeannine Falino, “‘The Pride Which Pervades thro every Class’: The Customers of Paul Revere,” in New England Silver & Silversmithing, 1620–1815, ed. Jeannine Falino and Gerald W. R. Ward (Boston: Colonial Society of Massachusetts, 2001), p. 174. 3 Robert Martello, Midnight Ride, Industrial Dawn: Paul Revere and the Growth of American Enterprise (Baltimore: Johns Hopkins University Press, 2010), p. 50. 4 Deborah A. Federhen, “From Artisan to Entrepreneur: Paul Revere’s Silver Shop Operation,” in Paul Revere: Artisan, Businessman, and Patriot, p. 71. 5 For more on Revere’s masonic imagery see Nan Wolverton, “‘Within the Compass of Good Citizens’: The Visual Arts of Freemasonry as Practiced by Paul Revere,” in Freemasonry and the Visual Arts (New York: Bloomsbury Academic, 2019).

NAN WOLVERTON is the society’s Director of Fellowships and of its Center for Historic American Visual Culture (CHAViC).