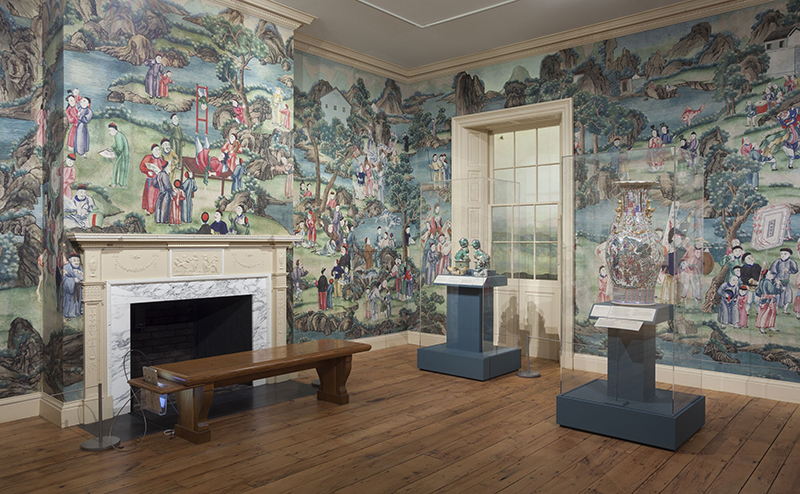 Period rooms have figured in the offerings of American museums since 1907, when antiquarian George Francis Dow installed three interiors at the Essex Institute in Salem, Massachusetts (now the Peabody Essex Museum). Subsequent installations in Boston, New York, Philadelphia, Washington, DC, and elsewhere proved appealing to the general public and connoisseurs of the decorative arts, but as long ago as the late 1970s, museum professionals began to reassess these spaces. Their concerns centered primarily on questions of authenticity and issues of display. These remain a matter of debate, but as with institutions generally, currency and inclusiveness now inform the dialogue as well. For the past several years, the Minneapolis Institute of Art (MIA) has taken a new approach to its interior installations with “Living Rooms: The Period Room Initiative.”

Whether actual rooms moved intact from elsewhere, or recreations generated from various sources, period rooms have generally functioned as didactic exhibits. Sometimes they are a legitimate relic of a place in time; others serve merely as a complementary backdrop to furniture and decorative pieces. “We did a fairly robust survey with visitors and our docents to get their impressions of the period rooms,” relates MIA content strategist Alex Bortolot. “And what we found is that they often think of them as time capsules, which in our museum, they mostly are not. They are the creation of the curatorial team, which makes decisions about what to put on view in them and what stories to tell.”

In 2017 Bortolot—along with Jennifer Komar Olivarez, MIA’s head of exhibition planning and strategy— addressed the Charleston Dining and Drawing Rooms (1772), which entered the museum in 1931. Extracted from the home of John Stuart, Britain’s superintendent of Indian Affairs, the spaces functioned as environmental illusions pegged to Stuart’s affluence and status. Drawing from collections elsewhere in the museum, as well as incorporating work by contemporary artists, Bortolot and Olivarez broadened that narrative to underscore Stuart’s close personal and diplomatic relationship with the local Cherokee population and highlight the role of West African enslaved people (of which Stuart counted two hundred among his property) in making the Carolinas the rice bowl of North America.

The latest endeavor for the team (along with curator Katie Sisneros and graduate students supported by the University of Minnesota’s Consortium for the Study of the Premodern World) is reinterpreting its English Tudor manor room to reflect sixteenth-century trade between England and the Islamic world. Again, the aim is to see beyond the historical oak paneling and the aesthetic and formal values usually on display in the room, by taking a closer look not only at the commercial links between the two worlds but the clash of cultures as well. A reproduction portrait of Suleiman I and a copy of the Koran are among the objects the Islamic world in in a more visible way in this space,” Olivarez says, “where before it was largely represented by just trade goods.”

While the MIA approach is not utterly radical, it is significant inasmuch as period rooms are often locked in the proverbial amber, with little attempt made at reinterpretation. “With the Living Rooms initiative,” Bortolot says, “we try to get to some larger truths, and I think our efforts speak to the continuing value of period rooms as spaces for curatorial experimentation.”