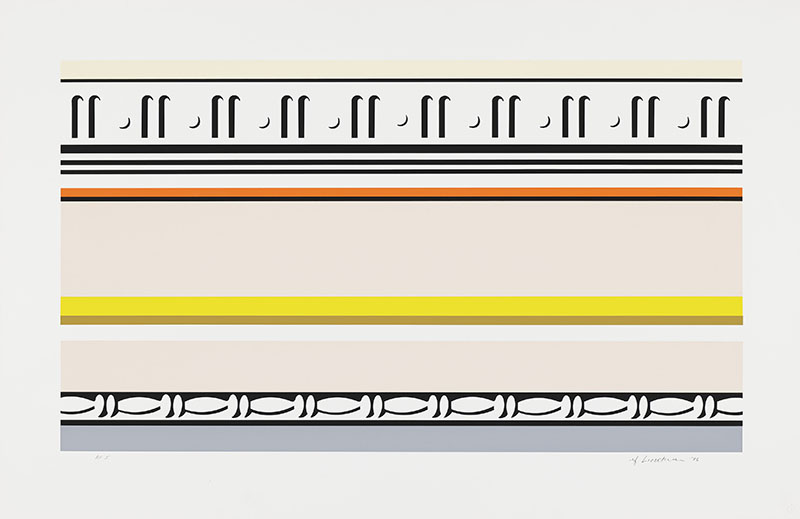 Many of the older elements of New York’s built environment share a common vocabulary of columns, corbels, abacuses, dentils, and scrolls, elements that can be found adorning fêted beaux arts buildings as well as fire hydrants. The artist Roy Lichtenstein, living and working in Lower Manhattan in the sixties and seventies, saw in these cast iron or concrete ornaments—many of them mass-produced—the same forces of replication and standardization that he’d been exploring through his paintings inspired by comic books. He owned a camera, and when the sun was directly overhead he’d point his lens skyward, framing the egg-and-dart moldings of the New York Stock Exchange or the rondel-encircled portals of anonymous high-rises. Back in the studio, he analyzed what he’d seen, making gelatin silver prints as well as lithographs—Temple, from 1964, is one of his earliest—and employing novel techniques and materials like silkscreens, photo stencils, and machine cut silver foil. Between 1970 and 1976, the artist would home in on a single variety of classical decoration: the cornice, frieze, and architrave that make up an entablature, creating two series of paintings and a culminating series of prints, the most technologically-advanced he’d ever produce. Fifteen selections from the Entablature body of work, part of the Roy Lichtenstein Study Collection formed at the museum from a gift of more than four hundred artworks and ephemera promised by the artist’s foundation last year, are on view at the Whitney Museum of American Art beginning today.

“Pop Art looks out into the world,” Lichtenstein said, “it appears to accept its environment, which is not good or bad, but different—another state of mind.” Lichtenstein’s focus on the ubiquitous entablature, one of the “fripperies” derided by modernist architects of his day, was certainly timely: the postmodernism of Robert Venturi, Michael Graves, and others would shake up the world of architecture in the ’80s, recuperating classical motifs as resolutely (if ironically) avant-garde.