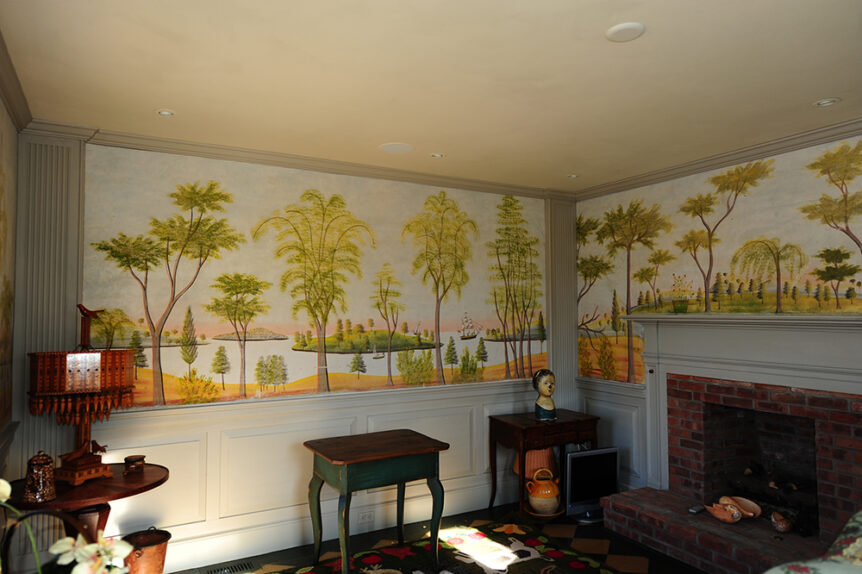 Thanks to an astute residential contractor, the expert guidance of members of the Center for Painted Wall Preservation, the help of antiques dealer Allan Katz, and the generosity of collectors Karin and Jonathan Fielding, a group of early nineteenth-century New England murals that might have ended up on a scrap pile have instead found a new home at the Huntington Library, Art Museum, and Botanical Gardens

The latest chapter in the story of the murals began in July, 2018, when the contractor got in touch with the Center for Painted Wall Preservation (CPWP), a Hallowell, Maine-based nonprofit. He was renovating a house on Nantucket where the living room was fitted with seven hand-painted scenic panels of great age depicting trees and meadows. The homeowners had no interest in the murals, but allowed the contractor a chance to save them. In his research, he came across the CPWP website, and there he saw the very same painted walls he hoped to rescue.

By coincidence, some eighteen years earlier CPWP member David Ottinger, an historic architectural  salvage expert, had removed those very murals from their original home in the Zebulon Trickey House, a residence in Westbrook, Maine dating to the late eighteenth century that was dismantled to make way for a new subdivision. The scenic paintings have been credited to Jonathan D. Poor (1807-1845), a nephew of the famed portraitist, muralist, inventor, and founder of Scientific American magazine Rufus Porter (1792-1884), who likely taught his nephew to paint. (A feature story on Porter can be found in the current issue of The Magazine ANTIQUES.)

Ottinger set off for Nantucket in 2018 to look into ways and means to stabilize, secure, and remove the murals. Meantime, Allan Katz—a Connecticut dealer in Americana—began the search for new owners. These soon appeared in the persons of California folk art collectors extraordinaire Karin and Jonathan Fielding, whose treasures are the focus of the forthcoming book Becoming America: Highlights from the Jonathan and Karin Fielding Collection of Folk Art, out in April from the Huntington Library and the Yale University Press. The requisite legal documents were drawn with the help of the CPWP’s attorney, Burton Fendelman, and before long the murals were in their packing cases and on their way across the country.

Now at the Huntington in the care of conservators, the murals are being prepared for display in the Jonathan and Karin Fielding Wing of the institution’s Virginia Steele Scott Galleries of American Art. (In a final irony, the same truck driver who brought the murals from Maine to Nantucket also drove them to Southern California.) When they go on view, Jonathan Poor’s scenic paintings will become the first nineteenth-century New England murals ever exhibited in a Western museum. With a nod to the Grateful Dead, what a long, strange trip it’s been.