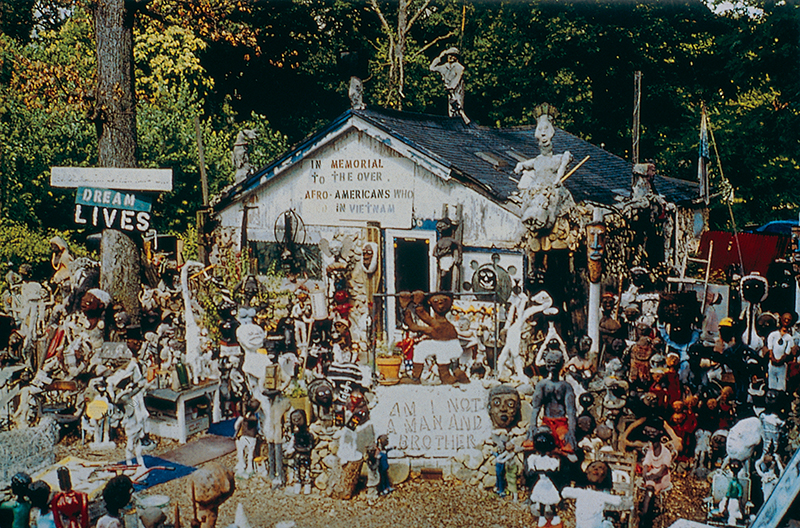 Plenty of people don’t like contemporary art. But contemporary folk art—that’s harder to disdain. Dependable quirkiness is its insistent charm, providing a ready, welcome respite from what’s heavy in the world.

Enter Dr. Charles Smith, the subject of a solo survey this summer at the John Michael Kohler Arts Center in Sheboygan, Wisconsin. This man makes figural sculptures, many out of concrete. Those on view are ash-colored and drooping, a result of being hastily constructed and aged out in the elements around his former home in Aurora, Illinois. Many are child size. And they chronicle—bluntly—the less-than-charming aspects of the African-American experience as Smith sees it.

Read their titles. A pair of downcast figures, one holding a baby whose thin arm dangles pathetically, is called Impoverished Family. Another, made of rope, rebar, and concrete—it looks like an African mask crossed with a Jim Henson character—is called 3/5 of a Man. There are tributes to traumas ranging from the private (a child pushed to his death from the window of a Chicago apartment) to the epic (the thousands of black lives lost in Vietnam). More than 150 sculptures will be on view at the Kohler, which removed some five hundred from Smith’s Aurora home when the artist relocated to Louisiana in the early 2000s.

Like other folk artists, Smith has crafted a persona—he’s not a medical doctor or a Ph.D., and reports that God told him to make art—and uses a familiar visual vocabulary. In photos, the assemblage in Aurora recalls the lawn sermons of Rev. H. D. Dennis or Howard Finster. But the similarities end there. In Smith’s art, everything is bitingly intentional. And at the Kohler, the work lands like a gut punch to comfy concepts of folk art.