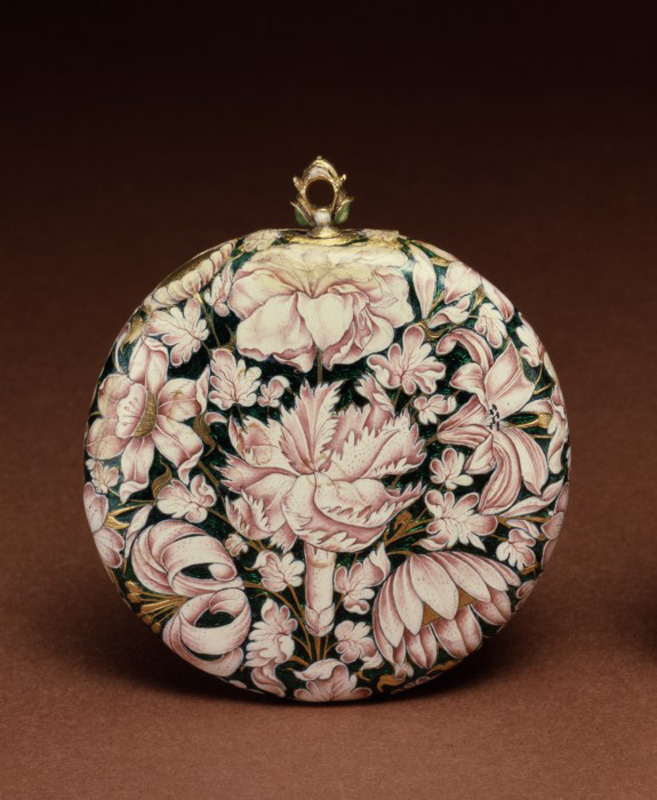 This article was originally published in the December 1963 issue of ANTIQUES. |

Not all images could be reproduced for this digital article. |

In his book Old Clocks and Watches and their Makers, F. J. Britten notes that “watches with enamel painting before 1640 are exceedingly rare, and there is a marked difference in the character of such decorative work executed at the beginning, compared with that done during the later years of the seventeenth century.” This change, or rather evolutionary process, is easiest to trace in French examples. In the early 1600’s these were made mainly in Blois; production was shifted to Paris, together with the enamelers themselves, toward the middle of the century.

At first, the materials used by the watchmakers of Blois were various: rock crystal set with enameled gold; precious stones studding the cases, semiprecious stones lining them; gold chased and encrusted with enamel; and, for a more common type of production, silver, silver and gold, silver gilt, or gilt copper. The metals were chiseled and engraved with decorative compositions often copied after prints by Etienne Delaune.

About 1630 there was a definite shift to the use of gold covered with a hard, opaque white enamel ornamented with very thin and fusible colored enamels. It is still debated whether the new technique should be credited to two craftsmen of Chateaudun, the goldsmiths, decorators, and miniature painters Jean Toutin ( 1578-1644 ) and Henri Toutin, his son ( 1614-c. 1683 ), or whether it was simultaneously discovered by enamelers working for the watchmakers of Blois. Very likely the secret was transmitted from the former to the latter, but we assume that the technique had a parallel development in the workshops of Chateaudun and Blois because the artists who painted on enamel, coating gold objects, were basically goldsmiths, whether they were classified as miniature painters or as watch decorators. We shall follow the progress from the traditional method of enameling in translucent and champlevé enamels on gold, to the revolutionary process of enameling on a ground of white enamel which was fired in the kiln before the colors were applied. All the examples illustrated here are from the collection of the Walters Art Gallery and are reproduced in approximately actual size [true only of print edition].

Fig. 1 Dial and back are enameled in translucent green on gold, dotted and chased with shallow sprays of close foliage. The border is adorned with lacelike lambrequins and a frieze of scallops reserved in the gold ground and filled with white enamel dotted with black; similar lambrequins rim the back. The white enamel was fired first; then the watchcase was sent to the kiln a second time for the fusing of the green enamel; and, finally, the black dots were applied and fired at a much lower temperature in a muffle kiln. The movement is inscribed Théodore Girard à Blois ( 1596-1680 ). Théodore, who entered the clockmakers’ company of Blois in 1619 as a journeyman, was the son of the watchmaker Marc Girard ( 1593-c. 1616 ). Like many decorators who engraved watchcases in Blois in the seventeenth century, Marc came from the Netherlands; he spelled his name Gerrard or Gyrard. Ex coll. Anatole Demidoff ( 1812-1870 ), Prince of San Donato.

Fig. 2 Decoration combining translucent enamel (green on a dotted ground, and yellow and green for the leaves) and opaque enamel (daisies, fritillaries, and thistles in white, reserved in champlevé, and blossoms in lavender blue, partly stippled white). The back plate is engraved with the name of the clockmaker, P. Le Blond à Paris. Three other watches by him are known, one in a rock-crystal case, an octagonal one in an engraved metal case, and one in cloisonné enamel. In the British Museum there is a watch signed Daniel Duduict à Paris (w. 1628-1634 ), with a similar case in gold enameled in translucent colors on a pounced ground with reserves of opaque lavender blue and details in tippling. Ex coll. Karl Thewalt of Cologne; exhibited at the Universal Exhibition in Paris in 1900.

Figs. 3 Here tulips, lilies, daisies, and other flowers and leaves are done in brownish pink on white enamel, on a ground of translucent green. But the inside (Fig. 4) has a ground entirely of white enamel, with sprays of flowers in lavender, yellow shaded in orange, and blue; greenish leaves; and birds painted in the same colors. On the bezel is a line of scallops in white enamel dotted with black. The back plate of the movement is inscribed G. Gamod à Paris (Gamod was one of the signatories to the statutes of the watchmakers’ corporation). The floral designs, copied from engravings by Jacques Vauquer, are possibly by the latter’s younger brother, Robert ( 1625-1670 ), enameler of Blois, who was the pupil of the most successful enameler of watchcases there, Christophe Morlière. A watch in the Victoria and Albert Museum which is very similar to this one in both its outer and inner decoration was attributed by H. P. Mitchell to Henri Toutin on account of the black opaque enameled ground of its back. Tow superb watches ornamented with floral compositions attributed to Morlière were in the J. P. Morgan collection. Another watch with similar decoration believed to have been enameled by that artist for his brother-in-law, the watchmaker Poète, is in the Kunsthistorisches Museum, Vienna; the watch is signed by Poète. Ex coll. Demidoff.

Figs. 4 Narcissus, red lilies, marigolds, zinnias, and larkspur, interspersed with butterflies, in variegated colors in white enameled reserves standing out in champlevé clusters against a ground enameled in translucent green. The hinged bezel is decorated like the back. The inside of the case shows a landscape painted on a white enamel ground: trees, a fortified town on a hillock, a bridge in the distance, and, in the foreground, a peasant tilling the earth with a team of oxen, and two aristocratic bystanders. Birds are sweeping across the sky. The maker of the movement of this watch signed it Josias Jolly à Paris. As Jolly was a French Protestant he must have been associated with Protestant enamelers of the Toutin school (the Toutins themselves were Protestants), such as Pierre Chartier, the son of a goldsmith, born in Blois, who came to Paris and was elected master in 1638. The floral composition of our watchcase is very close to that of an enameled plaque attributed to Chartier in the Grünes Gewölbe at Dresden. On that plaque the flowers are painted along the border in reserves against a ground of green translucent enamel, but a vase of flowers in the central oval medallion is executed in color on a white background. Ex coll. Demidoff.

Figs. 5, 6 Here attributed to Jacques Bordier ( 1616-1684 ), who was trained by the Toutins in the new technique of fashioning enameled watchcases. On the dial, a portrait of Henrietta Maria, wife of King Charles I of England (Fig. 5). Another portrait supposed to be of the queen appears on the back of a case signed within a floral garland by the London watchmaker Simon Hackett (w. 1632-1664 ). That watch is reproduced in Britten (6th ed.). But our portrait compares better with a miniature portrait of the same queen by Jean Petitot, signed and dated 1638, in the Royal Archives, The Hague. Petitot and Bordier, both from Geneva, were associated for half a century. They met first in the workshop of the Toutins in Paris about 1633, after the Toutins had moved there from Chateaudun. They may have renewed their acquaintance with Henri Toutin in England, where the latter was invited to execute enameled portraits. (Two of these, signed and dated, are known: one of Charles I (1636) in the Rijksmuseum, Amsterdam, and one of Lady Digby in the Walters Art Gallery.) On the case of our watch are painted two variants of a mythological theme: Venus and Adonis, or Atlanta and Meleager. In the bottom of the case two Callot-like figures, sketched with spirited bister strokes, briskly walk along a river under a pale sky tinged with lemon and lavender, like that of the watchcase in the Grünes Gewölbe which may be attributed to Pierre Chartier. Bordier may also have decorated, about 1651, a watch executed in Blois which passed from the collection of Prince Soltykoff into that of J. P. Morgan; its movement is signed by Marc Girard the younger.

Figs. 7 The laureated bust of a woman in a medallion with a roped border on the back of the case of this watch is a portrait, or the allegorical equivalent of a portrait. Translucent green enamel on a hatched ground divides the bust from four vignettes in reserves painted with camaïeu landscapes in pink and joined by rosettes in scrolled frames. The raised frames of the landscape vignettes and the raised enamel of the decorative links between them are indications of the survival of an earlier technique. The inside of this watch is pale blue, with a second medallion, representing Minerva with cuirass, helmet, and plumes, in a frame of black scrolls. The Minerva motif is found on watches in the Louvre (Nos. 8316 and 8333), the Rijksmuseum (No. 15063), the Ashmolean Museum, Oxford (No. 102), the Victoria and Albert Museum (Nos. 2371-1855), and the Geneva Museum (No. AD 202). The border of the dial (Fig. 13) and that of the flattened spherical case are decorated with flowerets in colored enamels on white ground. White is also the ground of the vignettes, but that of the two allegorical portraits is the beige or light brown stippling customary for miniatures. The movement is signed Aymé de Combe; he must have been an enameler of Blois. Indeed we read in a letter of the Grande Demoiselle, the sister of Gaston d’Orléans (patron of the watchmakers and goldsmiths of Blois and their protector at the French court), that the king and queen of France had watches similar to ours, notable for their small size and the blue ground around the “figures” – miniatures framed in medallions.

Fig. 8,9. Lid of an enameled watchcase set as the cover of a carved rock-crystal snuffbox. The Holy Family (Fig. 14) painted on the front is exactly the same as the one on the back of a watch in the British Museum which has a movement signed by Jean Hébrat, Brussels, 1640. Was this Hébrat a son or some other relative of the Hébrat who became master in Paris in 1612? There is less convention and a more charming intimacy in the scene on the back representing the Virgin, her hair untied, and the infant Jesus embracing a lamb (Fig. 15). These enamels recall those of Robert Vauquer of Blois (1625-1670 ), who used designs engraved by his older brother, Jacques. A watch enameled and signed by him, said to have belonged to Queen Anne of Austria, with hunting scenes on the lid and back and religious scenes on the dial and inside the case, was sold at the Bernal sale in London in 1855 (No. 3896). That watch had a movement made by C. Bonneux (or Bonneuie) in Paris in (1645). The decoration on the back of our enameled lid has a decidedly mannerist flavor, a feature that derives from the traditions of the print engravers of Chateaudun and Blois.