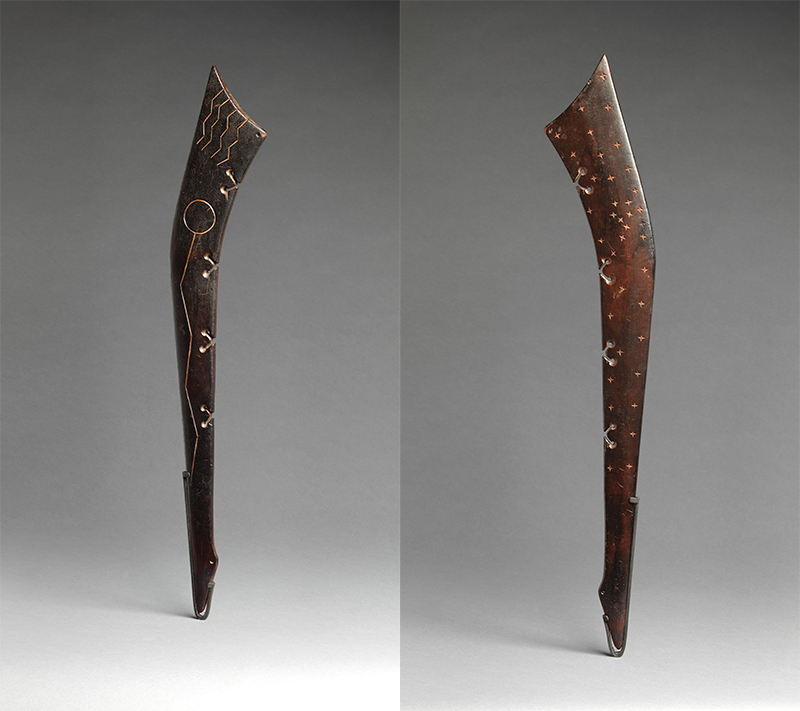 Front and back (with details) of a war club, Pawnee, Nebraska, c. 1800. Wood and pigment; height 27, width 5 inches, depth ¾ inch. Promised gift of Charles and Valerie Diker; photograph by Bruce Schwarz, © The Metropolitan Museum of Art.

Sometime around 1800, a Pawnee man used simple metal tools to carve this magnificent war club from a length of closegrained hardwood. His sensitive and skillful handling of proportion, weight, and balance, as well as the singularity and grace of the imagery he incised on its surface, sets the object apart from others of its type. The club’s form is generally referred to as “gunstock,” named by Euro-Americans who noted the resemblance of such objects to the stocks of rifles or muskets. However, antecedents of the form predate European encounters and exposure to guns, and current scholarship suggests the contours may instead reference a deer’s leg, tapering to a pointed hoof.

During the Pawnee man’s time, his nation was large and powerful, and his people lived in earthen lodge villages along rivers and their tributaries in what is now Nebraska. Intertribal warfare was a constant feature of life, and this club ensured its owner’s success in battle. The creation of war clubs also served as an important means of artistic expression for historical Woodlands and Eastern Plains men, and while it may be difficult to reconcile the deadly purpose of this weapon with its beautifully fashioned sculptural form and pictorial designs, necessity and spiritual belief make their coexistence perfectly consonant.

The imagery carved into the club led to its attribution as Pawnee. That nation’s complex religious beliefs, tied to the firmament and astronomical phenomena, are congruent with its incised designs. One side is embellished with thirty-eight four-pointed stars against a darkened reddish-stained ground, dazzling imagery evoking both sacred power and the night sky. The individual stars are filled with traces of red and white pigment, and they suggest varying degrees of light and prominence. At the center, the con stellation Pleiades appears. For the Pawnee, celestial bodies represent physical manifestations of the spiritual world, and the stars are gods or transformed human beings who have taken their place in the sky following their time on earth.

The image of a circle and an elongated zigzag line dominate the reverse side, originally stained black. Scholars speculate this imagery may represent a meteor, a celestial body sacred to the Pawnee. Men placed meteorites they found—believing them to be children of Tirawahat, the supreme god—in bundles associated with success in war. Alternatively, the imagery may represent thunder and lightning, sacred powers of the west, and the smaller zigzag lines at the top, a third power, the winds. These powers also related to war.

The four carved V-shaped configurations along the trailing edge are an integral part of the club’s symbolic imagery, unlike the small holes for the attachment of suspensions—such as feathers, scalps, and ribbons—at the top and bottom. Each is precisely delineated with two holes encircled by an angled border; open channels extend to the club’s edge. These unusual elements are unique in the tradition of war clubs, and their meaning has been lost, along with the object’s accompanying oral history.

Displayed in the American Wing at the Metropolitan Museum of Art, the beauty, mystery, and power of this carving evoke another time and place, before roads, fences, squared fields, and light pollution—the long-ago sweep of the Great Plains with, overhead, the limitless expanse of the star-lit night sky.

GAYLORD TORRENCE is the Fred and Virginia Merrill Senior Curator of American Indian Art at the Nelson- Atkins Museum of Art and guest curator of Art of Native America: The Charles and Valerie Diker Collection at the Metropolitan Museum of Art.