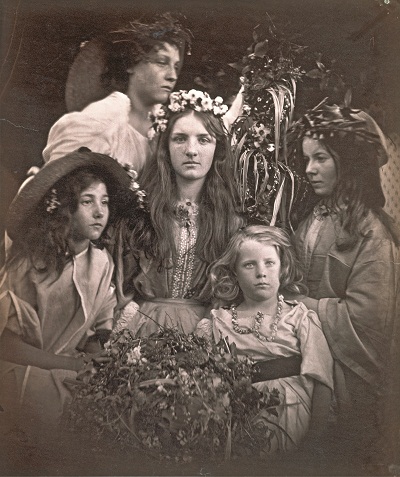 Julia Margaret Cameron was almost twenty-four when Louis-Jacques-Mondé Daguerre announced the invention of photography at the Académie des Sciences in Paris in 1839. But it wasn’t until she was forty-eight—another lifetime later—that she would fully take up the medium herself. The catalyst was a Christmas gift from her daughter Julia and Julia’s husband in 1863.”It may amuse you, Mother,” they ventured, “to try to photograph during your solitude.”1 Cameron was not so much amused as she was a soul possessed. “I turned my coal-house into my dark room,” she would later recount, “and a glazed fowl-house I had given to my children became my glass-house.”2 Through that humble construction—her adapted studio at Freshwater, on the Isle of Wight—would pass some of the leading lights of her day, from Alfred, Lord Tennyson to Charles Darwin. Many lesser-known sitters would succumb to her camera too—friends, family, the children of a local farmer. “From the first moment, I handled my lens with a tender ardour,” Cameron confided, “it has become to me as a living thing, with voice and memory and creative vigour.”3 Photography would never be the same again.

Cameron’s prodigious career, and her extraordinary output, are the subject of two complementary exhibitions in London this winter on the occasion of what would have been Cameron’s two hundredth birthday. Media Space, the still young showcase for photography, film, and television launched in 2013 by the Science Museum and its satellite institution, the National Media Museum in Bradford, presents Julia Margaret Cameron: Influence and Intimacy at their Exhibition Road location until March 28, 2016. Across the street, the Victoria and Albert Museum, which maintains the national collection of photography, shows Julia Margaret Cameron, through February 21. Each institution has wisely made the decision to feature its own celebrated collections. The National Media Museum, incorporating the former holdings of the Royal Photographic Society, boasts the largest collection of Cameron photographs in the world, crowned by the so-called Herschel Album, a compendium of early works that the artist prepared for her friend and mentor, the astronomer and occasional photographic inventor John Herschel. The V&A, in the guise of its predecessor the South Kensington Museum then under the leadership of its visionary director, Henry Cole, had a direct relationship with Cameron, which makes its collection (including the voluminous notes and correspondence that accompany the show) distinctive.

Cameron’s Glass House on the Isle of Wight has become the stuff of legend. Less well known is the two-room studio she maintained on the premises of the South Kensington Museum in 1868. As V&A curator and noted nineteenth-century scholar Marta Weiss explains in her superb (and refreshingly affordable) catalogue, this arguably qualifies Cameron as the V&A’s first artist in residence.

Cameron’s photography has been a touchstone for generations of photographers. The pictorialists adored her; modernists revered her. Alfred Stieglitz gave her five posthumous pictures in an issue of his renowned publication Camera Work—in the same issue he gave himself only four. E. O. Hoppé, England’s preeminent photographer in the 1920s, used to brag that Cameron had photographed at his premises at 7 Cromwell Place, at a time when it belonged to the painter John Everett Millais. The claim was doubtful, but no matter; it was a pedigree Hoppé found useful to cultivate. Edward Weston’s friend Imogen Cunningham, a giant of the American West Coast school, famously declared in 1975 that photographic portraiture had lost its way since Cameron. “I don’t think there’s anyone better,” she insisted.4

Cameron was one of those rare artists who saw the limitations of her medium not as obstacles, but as invitations to creative expression. The shallow depth of focus and deep chiaroscuro of many of her best pictures began as unintended biproducts of the equipment available to her. Her longer-than-normal lens might have been less practical than a short lens for making rapid exposures, especially when used close up, but it gave her subjects a bold graphic presence. Photographing indoors in suboptimal light, she was also forced to use a wide aperture and long exposure times, causing focus to fall off sharply, and frequently causing motion to blur. The V&A exhibition in particular includes several works, such as Group (Percy Keown and unknown girl), c. 1864 (Fig. 4), that a lesser photographer would have discarded. Not so, Cameron. To her, such imperfections (as others perceived them) were an integral part of her art. Pouring collodion too thickly on the plate gave some of her negatives a pronounced crepe pattern, and chemical impurities caused streaks. Careless handling admitted dust and scratches, plates occasionally cracked, and emulsions lifted or reticulated. Whenever she composited two negatives together, as others did so artfully, the seams between her images were laughably obvious. But Cameron was undaunted. The defects merely gave her pictures more immediacy. As Macmillan’s wrote at the time and Weiss notes, “she was the first person who had the wit to see her mistakes were her success.”5

No photographer of the time photographed with the honesty and directness of Julia Margaret Cameron. Technically-minded critics may have tutted at the flaws, but her pictures were conspicuously photographic in a way few of her contemporaries’ would ever be. David Wilkie Wynfield inspired her, Oscar Gustav Rejlander advised her, and Lewis Carroll talked shop, but her photography was unmistakably her own. She absorbed the lessons of the nascent symbolist movement, especially through family friend George Frederic Watts (see Fig. 2). Cameron and others in her circle have occasionally been described as “Pre-Raphaelite” photographers. This is largely a case of guilt by association, since Cameron knew most of the Pre-Raphaelites well, including William Holman Hunt (shown in the Media Space exhibition) and Dante Gabriel Rossetti (whose brother William appears at the V&A). Pre-Raphaelite sculptor Thomas Woolner fell hopelessly in love with Cameron’s niece Julia Jackson (who makes several stunning appearances in both shows) and proposed marriage when she was just sixteen.

Both the Media Space and V&A exhibitions include generous selections of Cameron’s narrative schemes—the biblical, mythological, Shakespearean, and poetic confections Cameron was so fond of making, which have roots in Pre-Raphaelite practice. Lest the viewer doubt the influence, Cameron even went so far as to title one photograph at the V&A “after” Raphael and another after Perugino, his master. Yet what is so striking about these works is neither the costumes the subjects wear nor the props they hold—it is their humanity. Even at their most contrived, Cameron’s photographs have a fresh, unfiltered, and penetrating quality unnparalleled in Victorian photography. Taut, powerful, and ambiguous, they represent a new approach to portraiture, centered on identity, rather than likeness. In this sense, to call her “Pre-Raphaelite” (to be fair, neither exhibition does so) is utterly misleading. No artist was ever more Post-Raphaelite than Julia Margaret Cameron—irrepressibly forward-thinking, resoundingly modern, and stubbornly photographic.

Cameron’s great-niece Virginia Woolf wrote in her extended essay A Room of One’s Own that true genius is “incandescent.” She meant by this that genius must burn insistently from within, writing its own rules, and capitulating to no one. It is hard to imagine a more apt description of Cameron, whose work remains as vital and compelling today as it was when it was first exhibited, a century and a half ago.

PHILLIP PRODGER is Head of Photographs at the National Portrait Gallery in London.