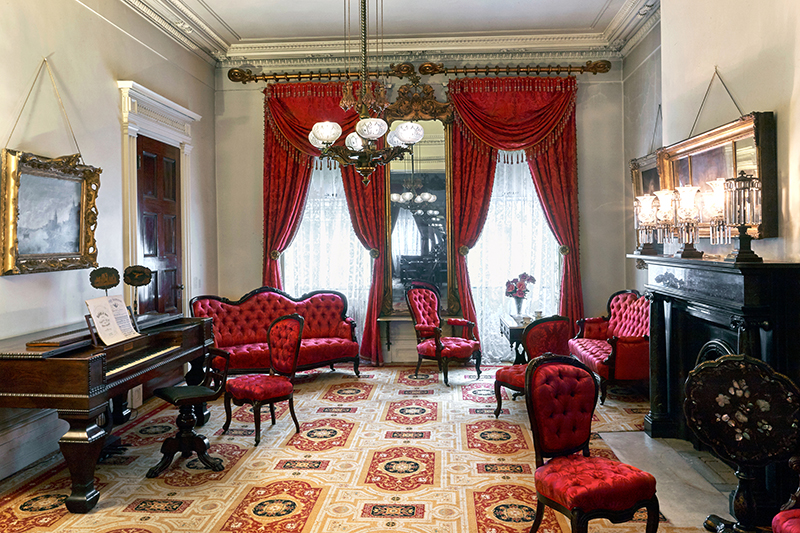 On East Fourth Street in New York City, around the corner from Colonnade Row and the Public Theater, stands a historically-significant row house that’s easy to miss: the Merchant’s House, a federal, state, and city landmark that dates from 1832 and contains a fine collection of furniture (including a suite of twelve mahogany chairs by Duncan Phyfe), decorative arts, and delicate period plasterwork. ANTIQUES spoke with Margaret Halsey Gardiner, who’s been the Merchant’s House Museum’s director for nearly thirty years.

The Magazine ANTIQUES: Take me through the Merchant’s House’s history.

Margaret Halsey Gardiner: Once the Erie Canal opened in 1825, New York City boomed, becoming extremely commercialized and congested. Merchants who’d made their fortunes at the South Street Seaport began migrating north, putting down roots in what was known as the Bond Street Area. This house, built by a hatter named Joseph Brewster, was bought in 1835 by merchant Seabury Tredwell. He would go on to raise eight children in the house with his wife Eliza. In 1840, their last child, a daughter named Gertrude, was born. Never marrying, she lived her entire life in the house, devotedly maintaining it as it had looked when her large family lived there. She died in poverty in 1933. Just before the Tredwell belongings were slated to be sold at auction, a great nephew named George Chapman swooped in, took possession of the house and everything in it, and dedicated himself to turning it into a museum, which opened in 1936.

TMA: When and how did it achieve landmark status?

MHG: New York City was a small world in the middle of the twentieth century, and anybody who knew anything about its architecture knew about this house and knew it needed to be saved. In 1965, after the passage of the New York City Landmarks Law, the Merchant’s House Federal exterior became the first designated landmark in the borough of Manhattan, its Greek Revival interiors achieving landmark status sixteen years later, in 1981.

TMA: How did you get involved?

MHG: In 1990 the building to the east of the Merchant’s House was demolished. What you have to remember is that this is a row house, meaning it was built to be supported by the buildings around it. The demolition of the house next door caused major structural damage to this building, necessitating its closure for two and a half years while expensive repairs were completed. And that’s around the time I got involved. I visited the Merchant’s House on New Year’s Day in 1988 and I drop-dead fell in love with it, and ended up becoming director in 1990.

MHG: We just started restoration on the front facade. We’re fixing and painting the windows and the front door and putting up new green shutters. I posted pictures of work on the front door on Instagram, and people just went wild. There’s really nothing like this house in New York City—it’s a miracle of survival.

To learn more about the Merchant’s House, its history, and the continuing challenges faced by this remarkable survivor, visit merchantshouse.org.