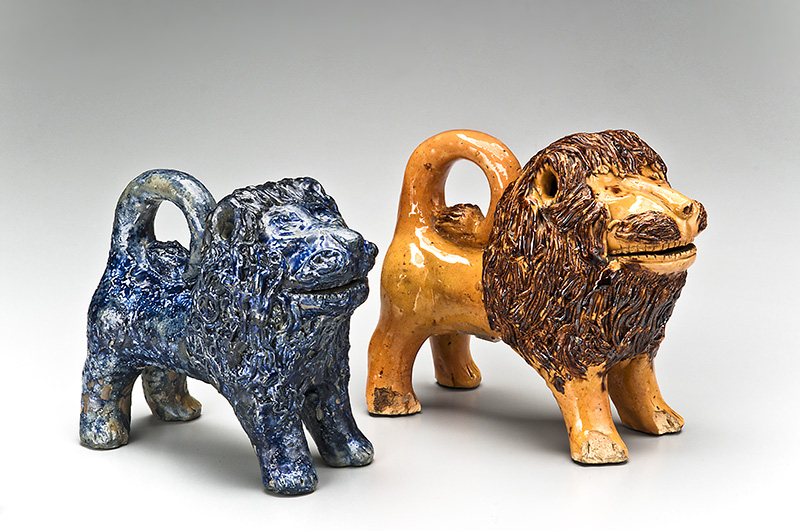 These two ceramic lions in the Metropolitan Museum of Art’s American Wing, one stoneware and one earthenware, are among the most iconic objects in the canon of American folk art. They are two of six known lions associated with members of the Bell family of potters. The Bells were known for numerous potteries in the Shenandoah and Cumberland Valleys, including kilns in Hagerstown, Maryland, Winchester, Virginia, and Waynesboro, Pennsylvania. These areas of southern Pennsylvania, Maryland, and Virginia had abundant and rich clay deposits, and the regions’ pottery traditions date to at least the mid-eighteenth century.

Both lions have long bodies, curled tails, and stylized features with incised detailing. The distinctive whiskers, manes, and tail ends are masses of thin strands of clay, created by forcing wet clay through an extruder—a perforated metal screen or coarse fabric, such as burlap—in what is known as the “coleslaw” technique. Their toothy smiles make them quite friendly!

All six known lions now reside in public collections: the two at the Met, and one each at the Winterthur Museum, the Henry Ford Museum, the American Folk Art Museum, and the Museum of Early Southern Decorative Arts. The lion at MESDA is attributed to Solomon Bell; the other five were probably made by his brother, John Bell.

By 1833 John Bell had established a small but successful pottery business in Waynesboro, Pennsylvania, after moving there from Winchester, which continued to grow as his own sons joined the shop. For the most part, the John Bell pottery produced utilitarian items such as crocks, pitchers, and flowerpots, fulfilling the demand of the local agrarian society in which it operated. However, the pottery added ornamental wares to its repertoire, and the family became well-known for its glazed earthenware figures.

The lions are made of buff-colored earthenware, with one exception. The blue lion, slightly smaller in size than its brothers, is made of stoneware. The striking blue of its glaze comes from a local recipe for “zaffree,” rather than the much more common pure cobalt. John Bell wrote to his brothers in 1848 about experimenting with a variety of glaze recipes, as Gary and Diana Stradling noted in the 2014 edition of Ceramics in America. The stoneware example at the Met is also the only one stamped with the maker’s name and location: “JOHN BELL/ WAYNESBORO.” (The Winterthur example is stamped “JOHN BELL.”) All six lion figures retain curious connections to their fellows, despite “living” in collections around the country.

The Bells were likely responding to figural ceramic lions and poodles made in Staffordshire, England, and to the Rockingham and parian versions made at the United States Pottery Company in Bennington, Vermont, all dating roughly to the mid-nineteenth century—decorative items that would have a graced a mantelpiece, for example. However, both oral histories and written statements attached to a few of the lions (including the stoneware figure) state that they were made and used as doorstops. The stoneware lion’s heavy weight adds some credence to the idea that the lions could have been both decorative and utilitarian.

Provenance and history of ownership by members of the extended Bell family suggest that these special objects were reserved for loved ones rather than for sale. With its jaunty stance and naive half-smile, the Met’s earthenware lion exhibits a high degree of charm and playfulness that speaks to its family history of having been made for John Bell’s daughter, Mary Elizabeth Bell [Newman], when she was a young woman. It seems she had a propensity for lions, as her uncle, Solomon Bell, made her a similar earthenware lion, possibly a few years earlier (the lion now in the MESDA collection). It is this connection, strengthened by handwritten statements by Mary’s son, William Carlton Newman, from the 1930s, that makes the lions’ history so intriguing. An oral history of the lion now at AFAM indicates that it was a gift from John Bell to his niece “Miss Crum” in Winchester.

These highly expressive and unusual figures speak to early experimentation by American potters with clay and glazes, but also to a family story of nineteenth-century craftsmanship and twentieth-century collecting. I am continuing to tease out the story of the lions’ journeys in the early part of the twentieth century, and look forward to reporting more at a future date.