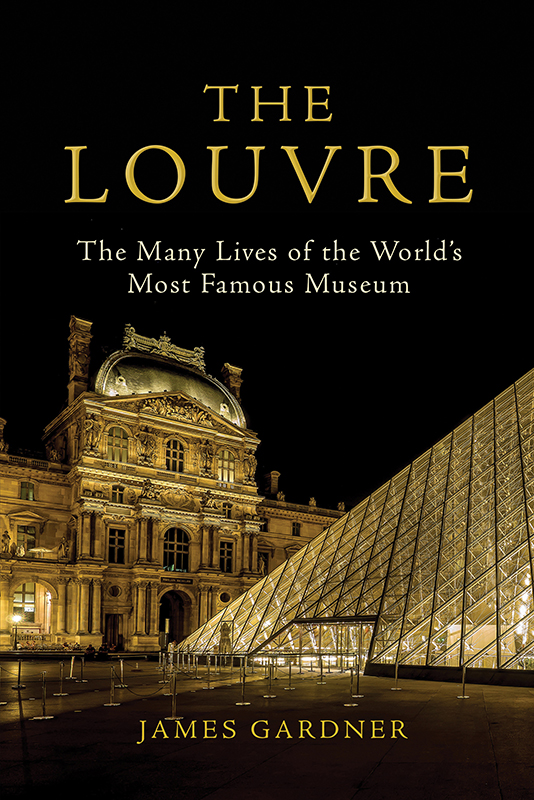 Tackling a subject such as the Louvre takes guts. Not only is James Gardner up to the challenges, but he retells and retraces the evolution of one of the world’s most complex architectural palimpsests with elegance, economy, and wit. Gardner’s beautifully written and relatively short book—considering the scope he manages to cover—is a remarkable feat that seeks to be as much a history of the building, of the city and country at the center of which it stands, and of that country’s cultural ambitions. Indeed, while carefully disentangling the Louvre’s architectural layers, Gardner simultaneously creates a tightly knit narration, weaving the museum’s genesis into the broader history of France and its politics of culture. His particularly enjoyable preface is upfront about the fact that his book is built on the archival enquiries of others, referring specifically to the long-awaited publication of the three-volume Histoire du Louvre (2016), edited by Geneviève Bresc-Bautier and Guillaume Fonkenell. His own well-edited bibliography constitutes a useful starting point for anyone who wishes to get their teeth into the Louvre’s history, listing the French and German classics on the subject, as well as the most significant contributions in English, by Hilary Ballon, Robert Berger, and, most recently, Hannah Williams.

In his introduction, Gardner makes a crucial if evident point that is particularly pertinent to the Louvre, which is that “traditionally architects and their patrons seek to belie [the] troubled gestations [of their creations] and to persuade visitors that they stand before a serenely unified project born of a single building campaign.” He expands on the persuasion of an edifice such as the Louvre toward the end of the book, stating that “important civic architecture tends to impose itself upon us with almost hypnotic power: it conjures us into feeling that it is so manifestly right, that it neither could nor should be anything other than what we see today.”

Of the ten chapters relating the Louvre’s chronology— which revisit the construction of Philippe August’s fortress, the palace of François I, the Grande Galerie of Henri IV, and the colonnade of Louis XIV—this reader found the book’s last three chapters the most gripping. Together they cover roughly 150 years, marked out at each extremity by the creation of the “Nouveau Louvre” for Napoleon III and the “Grand Louvre” for François Mitterrand. Where all other French monarchs failed, Napoleon III rose up—at extraordinary speed—to turn one of the world’s grandest hotchpotches into a unified whole. Gardner gives ample credit to the emperor’s so often forgotten architect, Louis Visconti, and his immediate successors, who continue to remain in the shadow of Pierre Lescot, Jacques Lemercier, and even Gianlorenzo Bernini. The latter’s visit to Paris and proposals for the Louvre may be among the most memorable episodes in the history of European architecture, but it is fair to say that his designs were never seriously considered.

Gardner also gives great credit to the transformative directorships of Philippe-Auguste Jeanron and Émilien de Nieuwerkerke of the 1840s and 1850s. Their curatorial reforms turned the unimaginably densely hung galleries, sometimes up to six pictures high, into spaces where art could breathe and was properly inventoried. The first half of the twentieth century, of course, was marked by two world wars, during which—amazingly—the Louvre’s collections remained predominantly unscathed. It is the postwar period, however, that produced a fascinating clash between the conservative traditionalism of the Right and the vanguardism of the Left, turning the Louvre’s aesthetic and political mission on its head. Even “at the risk of simplification,” Gardner concludes that in winning the military and political conflict of World War II, the Left, that is, the supporters of the Resistance, “also won the cultural battle that accompanied it.” The insertion, in 1953, of Georges Braque’s asymmetrical birds into the strict tectonic lines of the heavily adorned late Renaissance ceiling of the Salle Henri II “declared open war” on the aesthetic and political conventions established over the previous three centuries.

Gardner’s book concludes with the lasting impact of two visionaries: the novelist André Malraux, who, as minister of cultural affairs under Charles de Gaulle, raised the Louvre’s museum profile internationally, even giving in to Jacqueline Kennedy’s plea to lend the Mona Lisa to the National Gallery and the Metropolitan Museum; and François Mitterrand, the president-king, who with pharaonic determination placed a pyramid at the center of the Cour Napoléon. Their efforts, Gardner reminds the reader, were a response to the “drastic diminution of France’s role on the world stage [after the war]. Despite its continued eminence, it had become, as England had become, one great nation among a number of great nations, but largely shorn of its former political and economic preeminence.”

Throughout his cheerful and intelligent walk through the Louvre’s history, Gardner balances deep thought with occasional humor. His tribute to the modern-day tourist, “a creature of transcendent importance,” ought to be framed and distributed amongst all grumpy curators complaining about visitors being in their way. Some reader might miss further comments on controversial exhibitions, clashes of culture, scandals, and curatorial gossip— all of which are very much part of the fabric of this museum—but this is not what this book is about. Until the very end, Gardner unravels the many lives of the Louvre with composed enthusiasm and coolheadedness, avoiding hagiography. Yet, on the very last page he cannot help but burst into a celebration of the Louvre’s “paradigmatic status [that is] beyond all the other institutions of the world that were created to serve the same function”—a rhetoric akin to that of Malraux or indeed Emmanuel Macron’s inaugural speech for the Louvre Abu Dhabi. Who could blame Gardner? His book is a love letter and a real joy.