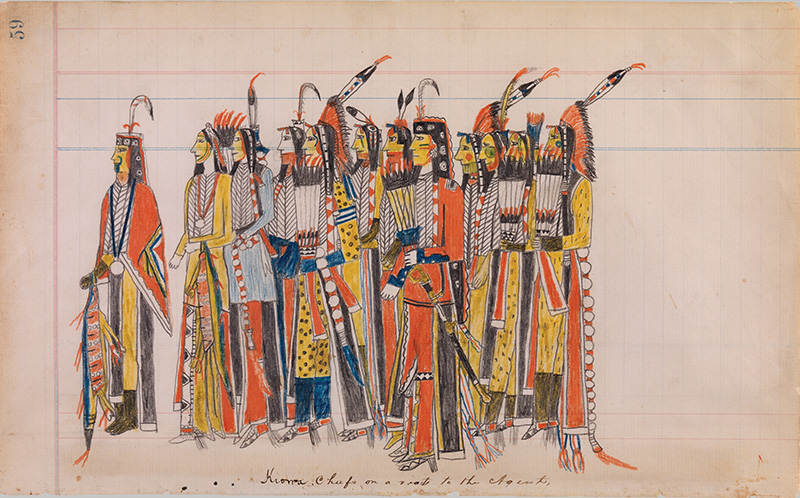 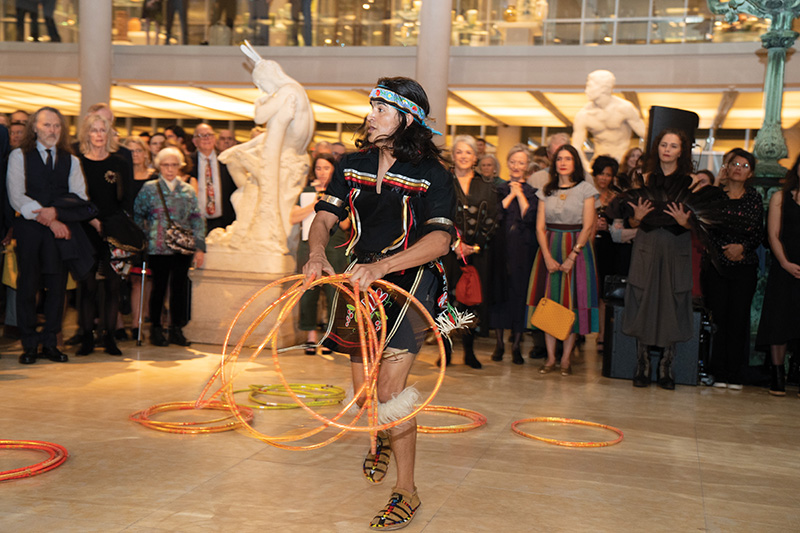 If you went to the Metropolitan Museum of Art last year for the most visited exhibition in the museum’s history—the Costume Institute’s Heavenly Bodies: Fashion and the Catholic Imagination—you might have emerged from the aesthetic swoon of those darkened galleries grateful for the light of the Engelhard Court, the American Wing’s democratic agora. Citizens linger there in flip-flops, hiker boots, cargo shorts, branded T-shirts, and even business attire, all parts of the puzzle once known as the New World. 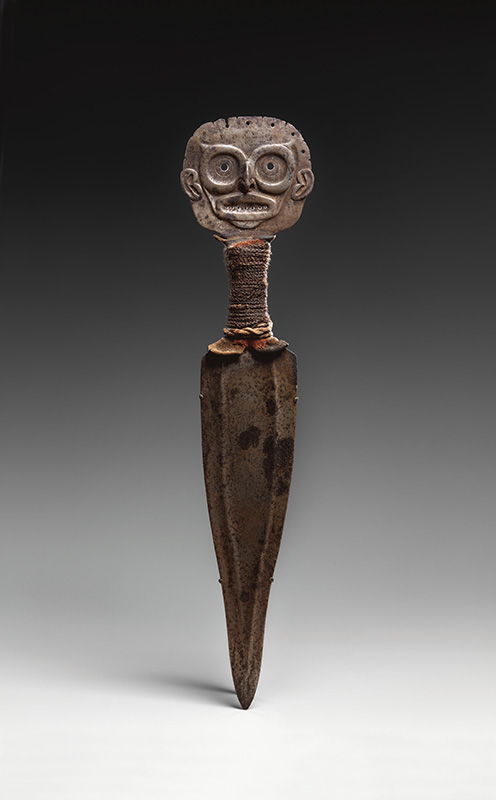 If you visited on October 2, that puzzle took on a different configuration when Ty Defoe, a Native American whose heritage is not the misnamed New World but one far older, astonished the crowd with a joyous hoop dance, stamping and chanting as Augustus Saint-Gaudens’s sculpture of a doomed and defeated Hiawatha looked down in adamantine gloom (Fig. 1). The hoop dance, a mesmerizing feat of footwork and sleight of hand, celebrates the interconnectedness of all things, and on this day it was meant to connect visitors to the exhibition Art of Native America: The Charles and Valerie Diker Collection. The performance was a transformative moment, one of several in the newly invigorated American Wing, but the first to strike a Native American note. Ninety-four years after its founding, the wing has at last opened its galleries to Native American work. And thanks to the gifts, promised gifts, and loans from the Dikers, as well as the commitment of the museum and its curators to acquiring other such objects, both historic and contemporary, it will become a place where the vast diaspora of Native American work can be exhibited and the almost unfathomable lacunae in our understanding of it explored. But first there is this exhibition, with 116 objects from more than fifty cultures across North America spanning several centuries—an undertaking with more hazards and conceptual difficulties than most museums encounter in a decade. And more rewards as well. 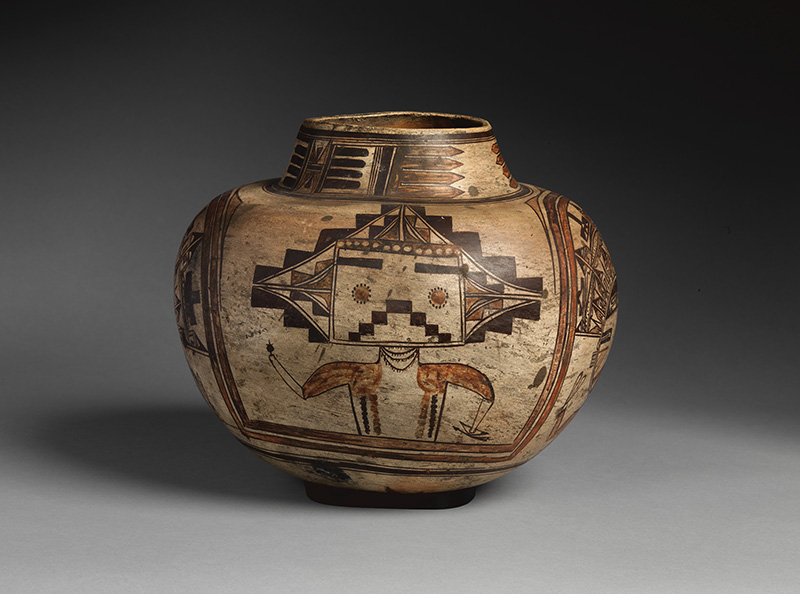 One of those rewards is the exhibition’s catalogue, an essential addition to the library of anyone who cares about American culture. Everything in the show has been illustrated, often with details of beadwork, stitchery, weaving, and carving. Beyond that, three important essays—by Sylvia Yount, Lawrence A. Fleischman Curator in Charge of the American Wing, guest curator Gaylord Torrence, curator of American Indian Art at the Nelson-Atkins Museum of Art, and Ned Blackhawk, professor of history and American studies at Yale University—break new ground in the kind of candor an exhibition of Native American material requires but seldom, if ever, receives. 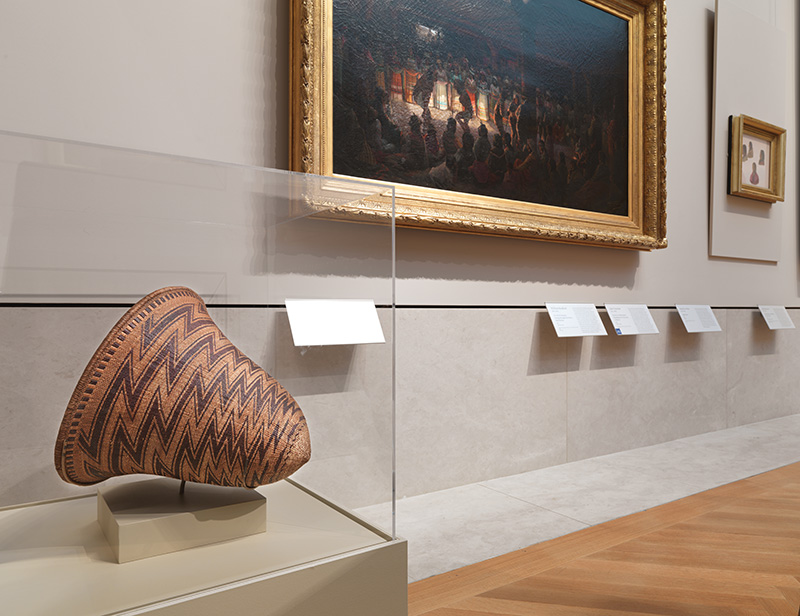 Fig. 4. View of gallery 760 in the American Wing, featuring a basket by a Pomo artist, California, c. 1890–1910, beside Jules Tavernier’s Dance in a Subterranean Roundhouse at Cedar Lake, California (1878).

In many ways Art of Native America forms the capstone in the democratization of the American Wing. In recent years visitors have been welcomed into the past with appealing podcasts on painting, sculpture, and decorative arts by Nate DiMeo, the Met’s artist in residence 2016–2017, and with exhibitions such as Sara Berman’s Closet, installed a few steps from the beautifully restored Worsham- Rockefeller Dressing Room. The arrangement linked two self-made women: Arabella Worsham Huntington (1851–1924), with her gilded age opulence, and Sara Berman (1920–2004), whose modest and minimalist Greenwich Village wardrobe was no less carefully considered.

More recently, the revelatory Thomas Cole’s Journey: Atlantic Crossings changed our view of that painter— from founder of the Edenic Hudson River school to refugee from England’s industrial revolution, whose landscapes and history paintings warned of our failure to preserve and protect both nature and democracy. There is now a renewed emphasis on Latin American art and on the work of African Americans, with an exhibition of Edgefield District pottery scheduled for 2020 of particular interest. As the history of American art is revised and expanded, it would certainly make sense to include the work of such African-American artists as Thornton Dial, Lonnie Holley, and others from the Souls Grown Deep Foundation gift. It belongs in the American Wing every bit as much as it does in the museum’s contemporary galleries.

The Met’s separation of American art of the early twentieth century from contemporary work has never seemed more limiting than in this exhibition of Native American objects. Artists from several tribal backgrounds attended the opening, and a few days later a group of them participated in a walkthrough for visitors to demonstrate how, despite the tragedies of history, aesthetic traditions of indigenous communities have survived from pre-contact to the current moment. Standing before one of the most significant pieces in the show, a shoulder bag from roughly 1800 described as “possibly Mississauga Ojibwa,” Ty Defoe (Ojibwe and Oneida) spoke and sang in his native language before suggesting that its thunderbird and turtle held cosmological meanings that are, for him, anything but arcane or abstract. Martha Redbone, a musician who is African American, Cherokee, Shawnee, and Choctaw, approached a ledger drawing and drew from it a native dance, which she performed while also summoning the audience to join her in an African-American call-and-response chant. 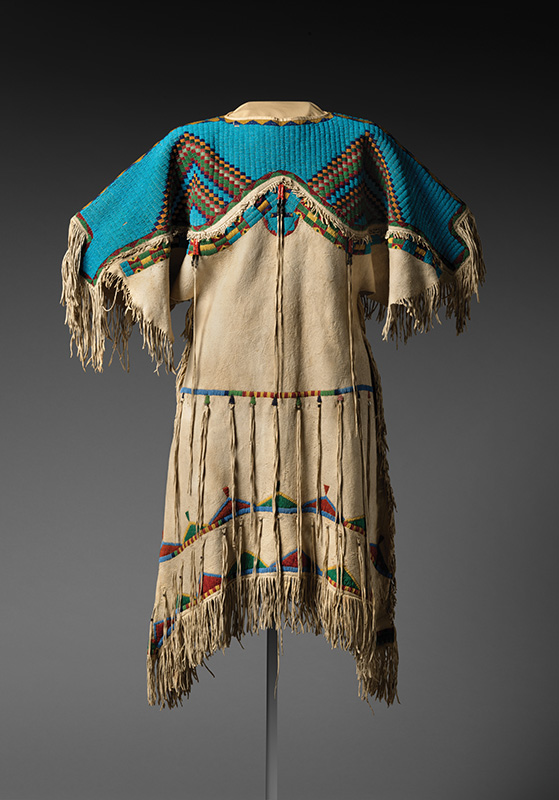 As this collection is integrated into the history of American art and into the American experience (something the Dikers insisted on as a condition of their gift), it is bound to elicit uncomfortable discussions about the devastation wrought on Native American cultures—and so it did on this occasion. Jackson Polys (Tlingit) is a master carver who teaches at Columbia University. As he speaks, he carves his words with as much care as he does his work. He chose a Tlingit dagger from about 1780 to 1840 and began by meditating on territory, land, and the question of who can speak for this object (Fig. 3). Valerie Diker interrupted him to ask that he shift his focus instead to a celebration of the art, and although Polys listened, he was not deterred when he resumed his quiet but firm meditation. Two Native Americans in the audience came up afterward to thank him, and Valerie Diker, no stranger to the difficult conversations the collection elicits, stayed on for the other talks.

Polys knows how to think about objects whose creation was subordinate to matters of the spirit, objects that transcend their making and were not created as “art.” He was considering how we can discuss these issues together with aesthetic ones, as we must, and how, as we do so, we can also include the history of what happened to the cultures that made them. That will involve a dance every bit as intricate, spirited, and important as Ty Defoe’s. It will be the dance and the task of the Met going forward. Other museums as yet unsure of what to do with their collections will be watching. 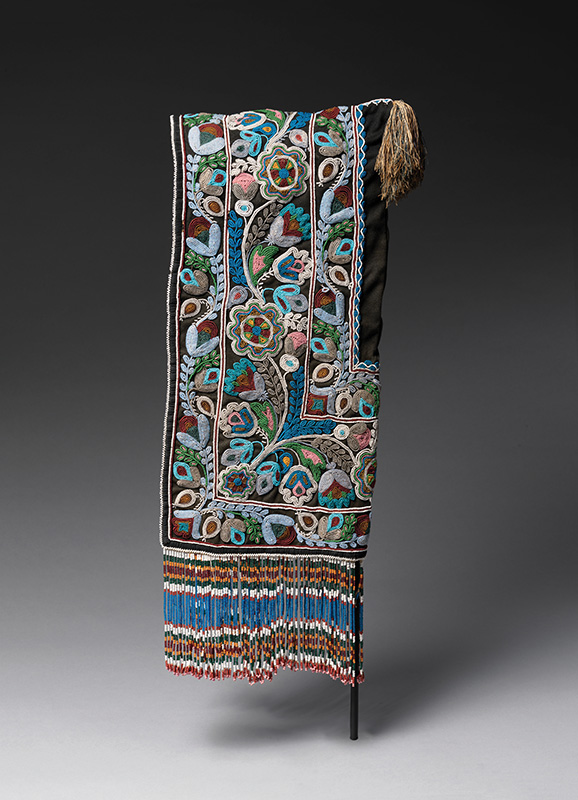 We are just now in a moment of heightened awareness of Native American rights, so it was predictable that without seeing the exhibition, reading its catalogue, or examining the long list of advisers, tribal and nontribal, who were consulted in the mounting of this show, someone would voice an objection and garner the attention of a website that did not check its facts. Shannon Keller O’Loughlin of the Association on American Indian Affairs denounced the Met as wrong to exhibit this material as art, and insisted that its acquisition could only be the result of “trafficking and looting.” This is the kind of talk that makes the heart fierce even when the truth lies elsewhere. We do know that when some tribes were in dire circumstances, many objects were dispersed that should not have been, but that was more than a hundred years ago and most tribes now have their own history and heritage offices to share information and guide museums in the exhibition of the work—or, when necessary, in its repatriation. 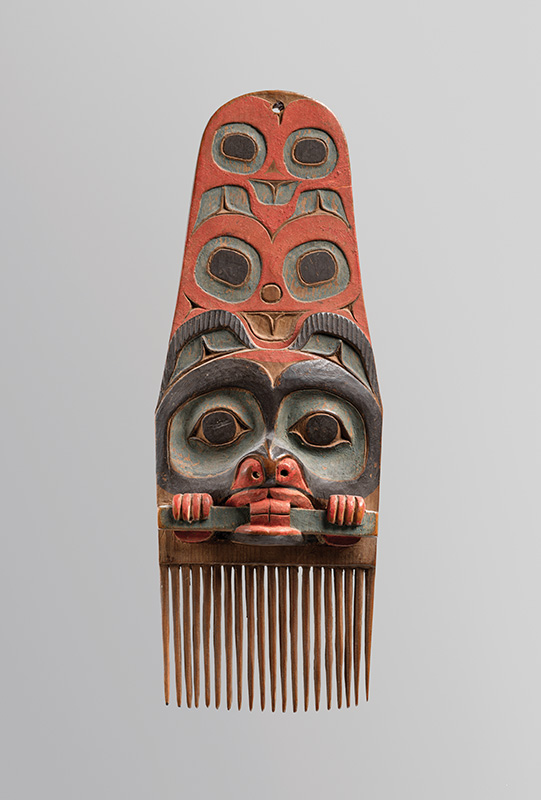 In the meantime, the museum has been doing some interesting things. A few years ago three Native American pieces—a Pomo basket, an Iroquois pouch, and a San Ildefonso Pueblo jar—were placed near paintings by Gilbert Stuart, Jules Tavernier, and Ernest Blumenschein in which such objects appear. But what really delighted me was the afternoon I found myself in the gallery devoted to the art of the American West, where a huge drawing from about 1920 by Standing Bear, depicting the Battle of Little Bighorn, had recently been installed (Fig. 6). I laughed aloud at this much-overdue rendition of General Custer, too often glorified in painting, poetry, and prose. (Even that great populist Walt Whitman committed a ghastly poem extolling the general: “Thou of sunny, flowing hair,” sadly fallen at the hands of the “dusky Sioux.”) Standing Bear had fought in the 1876 battle when he was sixteen; by 1920 he had reflected enough upon his experience to compose this huge panorama with an unhorsed and discombobulated Custer at its center. It is part of the Diker Collection and now on view in the exhibition. I hope it will eventually return to the gallery upstairs where it so enchanted me several months ago. 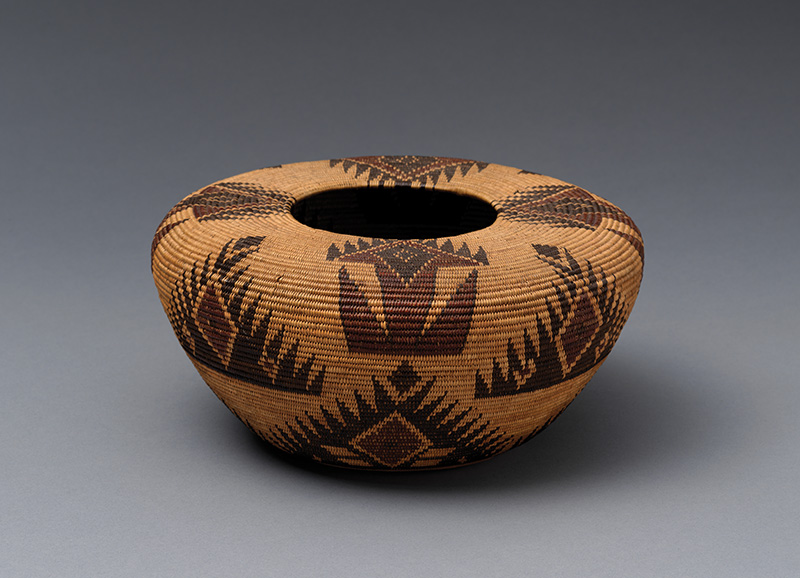 More adventurous delights await visitors to the American Wing when they find that some of its treasures have acquired additional labels by Native Americans, entitled “Native Perspectives.” Saint-Gaudens’s Hiawatha now has a plaque by Jackson Polys that reads in part, “This body is depicted with sensitive restraint in a state of retreat, requiring the quiver down and weapons appropriately at rest, in order to keep the future settled.” Ned Blackhawk (Western Shoshone) of Yale includes this comment in his response to John Wesley Jarvis’s portrait General Andrew Jackson: “The rise of Jacksonian Democracy came at the expense of American Indian communities . . . . [The] Trail of Tears remains forever associated with his legacy.” Well, if it didn’t before, it does now. The mischievous Cree artist Kent Monkman describes Ralph Earl’s Marinus Willet in words that will make you laugh and wince. And just when you thought you knew too much about Emanuel Leutze’s Washington Crossing the Delaware, Alan Michelson (Mohawk) shows that you did not know enough. There are other remarks, including one by Wendy Red Star (Apsáalooke/ Crow) on Edmonia Lewis that has occasioned some controversy among Native Americans—which only tells you that this experiment in alternative labels is alive and well in the twenty-first century.

The chasm between a culture that believes objects of beauty belong in a museum and one that understands their meaning and function quite differently is difficult to bridge. In the programming related to Art of Native America the Met keeps the conversation going, invigorating both cultures in the process. In 1878 Jules Tavernier depicted a Native American ceremony in his Dance in a Subterranean Roundhouse at Clear Lake, California, finding beauty in something he did not understand. In 2018 Ty Defoe added his “Native Perspective” to that painting in the form of a poem that opens a window onto a world that Tavernier only sensed. Here is its final stanza:

Dancers dance to the drum

like a chain for spirits to find their way into our little roundhouse.

Seven years on the earth I was

with ear pressed on the dirt floor.

I remember the roundhouse.

Painting and poem are on view in Gallery 760.