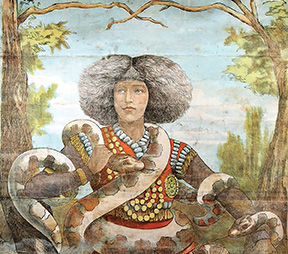 A group of circus posters at the Shelburne Museum illustrates the routine stereotypes and exploitative practices of circus owners as they battled one another for primacy.

In June of 1991 a cache of late nineteenth-century circus posters was discovered beneath the exterior siding on Harold and Gladys Degree’s house in Colchester, Vermont (Fig. 6).1 Long forgotten, the five large posters featuring exotic animals and human performers advertised the July 26, 1883, performance of “The Great Forepaugh Museum, Menagerie, Triple Circus, and Roman Hippodrome” in the nearby city of Burlington. Immediately recognizing the significance of their find, the Degrees offered the posters to the Shelburne Museum with the stipulation that they be removed quickly to expedite the renovation project. A team of curators, conservators, and carpenters was dispatched to assess the situation and determine the safest and most expeditious way to extract the posters from the structure. During this inspection, a second layer of posters was detected beneath the Forepaugh advertisements, complicating the removal process. The museum’s conservation team decided it was best to remove the posters by cutting out sections of the wall with the layers of paper still attached.2

In 2010, after nearly two decades in storage, the posters were finally brought out for conservation. When the layers of fragile paper were taken off the timber substrates and separated, six posters for John B. Doris’s “Great Inter-Ocean Circus and Menagerie,” including one featuring its marquee act, Millie-Christine, were revealed (Fig. 2). The newly exposed posters offered evidence of a hard-fought advertising war waged between the billposters working for Forepaugh’s and Doris’s shows in the summer of 1883.3 Both were scheduled to play the same route one month apart, with Doris arriving in Burlington first, on June 22, and both were competing for the patronage of Burlington’s 11,347 citizens and the 21,418 residents of the entire Lake Champlain Valley region.4 Such advertising wars were common when the tours of rival shows intersected. The guerrilla warfare-style tactics employed involved sabotage by covering over posters and libelous character assassination of peerless performers like Millie-Christine.

One of the Forepaugh posters attached to the Degrees’ house (sadly only the upper half of the poster survives) features the alluring Nala Damajante, the “Hindoo Snake Charmer,” in the deadly grip of two constrictors (Fig. 5).5 Characterized by her large Afro-like hairdo and exotic garb, Damajante, who was reportedly born in France, was presented to American audiences as having been born and raised in the exotic Far East.6 According to Damajante, she began her career at the age of sixteen, working with a “smaller variety of snake, poisonous ones; but finding that little attention was paid by audiences to such small reptiles, however venomous they might be…determined to devote [her] attention to the largest variety” of constrictors.7 As the poster from 1886 in Figure 4 illustrates, however, she continued to be advertised as “A Genuine East Indian Who Makes Pets of the Most Venomous and Dangerous Reptiles” long after she switched to working exclusively with non-venomous pythons, boa constrictors, and anacondas. When asked about her fears of being bitten, Damajante replied, “The bite is not poisonous, but it is rather painful. I don’t mind my hands so much, but am on the watch to keep them from striking at my eyes.”8 The greatest danger Damajante faced was graphically detailed in an 1883 article that described an incident in front of a live circus audience. According to the report, the charmeuse almost had the life squeezed out of her by a twelve-foot-long, nineteen-pound, unusually hyperactive python that wrapped itself around her chest and throat and began to contract its muscular body. Holding the hissing python by the back of its head with her right hand, the charmer with “remarkable nerve, managed to free her left arm, and in another instant had, with all the strength she possessed in both hands, unwrapped the writhing necklace from her throat. She placed her dangerous pet back in its box, bowed, and retired.”9

As dangerous as Damajante’s performances might have been, the life and career of Millie-Christine McKoy (or McCoy), African-American conjoined twin sisters, who were featured on the poster (Fig. 10) underneath the one of Damajante, more fully bespeak the exploitative nature of the circus world.

Born into slavery in North Carolina in 1851 or 1852, Millie-Christine had since birth been subjected to embarrassing private and public medical examinations that detailed their indissoluble union as symmetrical pygopagus twins (conjoined at the sacral region). As slaves, the sisters were considered private property, and as such were exhibited as the “Two-Headed Girl” by a succession of owners throughout the United States and abroad beginning when they were ten months old. One manager actually kidnapped them and absconded with them to Europe, where they were exhibited and again subjected to invasive medical inspections for a price, until a judicial intervention on behalf of their American slave master returned them again to private ownership.10

Fully developed women with distinct personalities, Millie-Christine referred to themselves as one, writing metaphorically, “We have but one heart, one feeling in common, one desire, one purpose.”11 For a while after the Civil War, they continued to be managed by their previous owners, the Smith family, touring the world, singing (Millie sang alto and Christine soprano) and dancing to large audiences. In 1882 the sisters were tempted out of retirement by John B. Doris and his then partner, George H. Batchellor, who offered them an extraordinary annual salary of $25,000 (their estimated value in the estate appraisal of their deceased owner, Joseph Smith, in 1862)12 along “with all expenses of railway transportation, hotel, carriage, maid and man servant” paid for by the Great Inter-Ocean Circus.13 Unlike their previous managers, who exploited them and treated them as freaks of nature, Doris, who was known for running a family-friendly circus sometimes called a “Sunday school show,” treated Millie-Christine as stars. Doris’s advertisements explicitly declared that the conjoined sisters were “not a side-show curiosity,” and he showcased their twice-daily performances on a stage under the main big top.14

After years suffering the indignities of being treated as chattel and separated from their family, Millie-Christine had found in John B. Doris a showman who seems to have respected them as performers. Unfortunately, Doris could not shield them from the racist ire of his competitor Adam Forepaugh. At the time Forpaugh’s billposters in Vermont were covering over Doris’s poster of Millie-Christine on the Degrees’ house, the conjoined sisters were suing Forepaugh for libel in U.S. District Court in Indiana, alleging that the showman had “composed and published showbills” (known in circus parlance as “rat sheets”) that impugned their physical and moral character.15 Forepaugh had, indeed, resorted to vicious ad hominem attacks against the sisters, making libelous statements that played to white audiences’ fears and prejudices. One particularly repugnant rat sheet claimed: “The one great feature this concern [Doris’s Great Inter-Ocean Circus and Menagerie] extensively advertises is a horribly repulsive negro monstrosity. No lady would knowingly ever look upon it. Little children cover their faces with their hands when encountering this frightful malformation and the sooner this hideous human deformity is hid from public view the better it will be for the community. All good Christian people can but regret that this afflicted object should be hawked over the country to satisfy the greed of a couple of sideshow exhibitors.”16

The poster in Figure 8, printed by the Strobridge Lithographing Company in 1882, appears to have been intended to refute Forepaugh’s malicious description of Millie-Christine, showing them fashionably dressed and performing in an elegantly appointed room to a small and sophisticated audience of white ladies, gentlemen, and children. The illustration in Figure 9, from a Doris circular, shows them meeting Queen Victoria, who described them as “very dark coloured, if not exactly negros & [they] look very merry & happy.”18

Despite multiple continuances, settlement negotiations, a withdrawal of the complaint, and then refiling in 1883, Millie Christine v. Adam Forepaugh was never adjudicated. Although Millie-Christine’s lawsuit was a legitimate cause of action, Indiana had some of the strictest libel laws in the country, and circuses commonly used its legal system to retaliate against their rivals.19 W.C. Coup, a famous showman, described why it could be effective: “Once we became involved in one of these contests, and the opposition, in order to harass us, actually had four of our men arrested…on a charge of libel. The Indiana libel laws were very severe, and in each instance we were compelled to give a heavy bond for the release of our man.”20

After two seasons traveling with Doris’s Great Inter-Ocean Circus, exhibiting at dime museums, and a stint working for P.T. Barnum, Millie-Christine retired wealthy enough to build a house on the property of their former slave owner in Welches Creek, North Carolina. Over the next three decades the sisters exhibited infrequently and were known in their community for their piety and charity work. Millie died at six o’clock on October 8, 1912, and Christine followed eight to seventeen hours later. Christine was said to have spent her final hours praying and singing hymns.21

Papering the Town: Circus Posters in America, on view at the Shelburne Museum from July 9 to January 22, 2017, features some of the oldest, rarest, and largest circus posters in Shelburne’s collection. Examples like the Zoological Institute of the City of New York (1835) and Mr. Sage, Proprietor of the American Circus (1843) have rarely been shown due to their immense size and extreme age.

KORY W. ROGERS is curator of the Shelburne Museum.