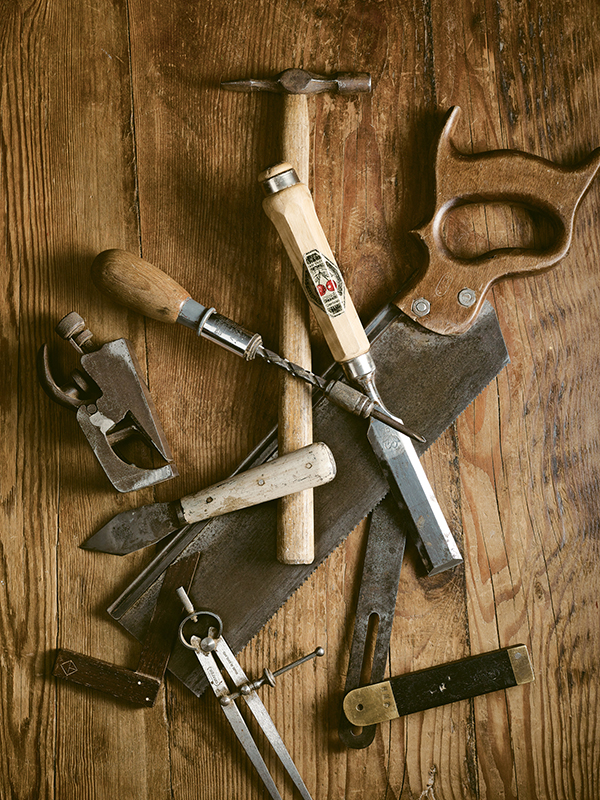 You’re not a craftsman until you think with the point of your tool,” or so says Sean Sutcliffe, cofounder of the furniture firm Benchmark. I’ve heard this said before. It’s an old expression used by veteran carpenters and woodworkers to encourage novices to concentrate and fully engage with their work. Old saws aside (ahem), the relationship between a craftsperson and his or her tools is indeed an intimate one. Honoring that bond, The Story of Tools, a new book by the editors of the British magazine Hole and Corner, scrutinizes twenty-five makers who describe their connection to a certain tool or set of tools that they use in their work.

There’s an impressive list of craftsmen and -women here working across a wide array of mediums, and who go by names that range from the Earl of Snowdon to Barn the Spoon. They trained in design or worked as an apprentice or are wholly self-taught. The tools they share with the reader were handed down from previous generations, bought new, found in junk sales, or custom built.

The sheer catholicity of this collection brings to mind how vital tools are to our lives. Without tools—pencil, brush, knife, chisel, scissors, hammer, or computer-controlled router—everything is just an idea. Tools are literally the way in which we bring what’s in our heads into the physical world. Without tools, Michelangelo’s David is just a rock.

The tools featured in the book run the gamut from awls and brushes to whalebone sculpting tools. The stories are varied as well. Sutcliffe discusses a set of chisels passed down to him by his uncle forty years ago, while Emma Davies, a horticulturist who is veteran of some of the most famous gardens in England, praises a tool called the widger, used in the propagation of plants, which she just discovered in the last year, after twenty years in the field.

Master woodturner and founding chairman of the Heritage Crafts Association Robin Wood chose to highlight the turning hook. Wood uses this tool in making nested bowls, a series of concentric bowls of diminishing size turned from the same block of wood—the “Holy Grail of traditional turning,” in his view. Wood’s choice of tool seems particularly apt for this discussion, as the craftsman must understand how that tool functions to the level of being able to wield it accurately with its blade out of sight inside the bowl. Even more impressive, Wood had to teach himself the craft—and forge his own tools—as the last known practitioner of nested-bowl turning died in 1958.

The book is divided into three sections—Wood and Stone; Earth, Metal, and Glass; and Material, Cloth, and Decoration—and there are lovely photos throughout of the tools in use and at rest. The focus is on traditional crafts and hand tools, though noted designer-maker Gareth Neal makes a nod toward technology by including a Makita cordless drill.

For me, The Story of Tools was so engaging that I found myself researching the stories of the people on the other end of those tools. You should get to know them, too.