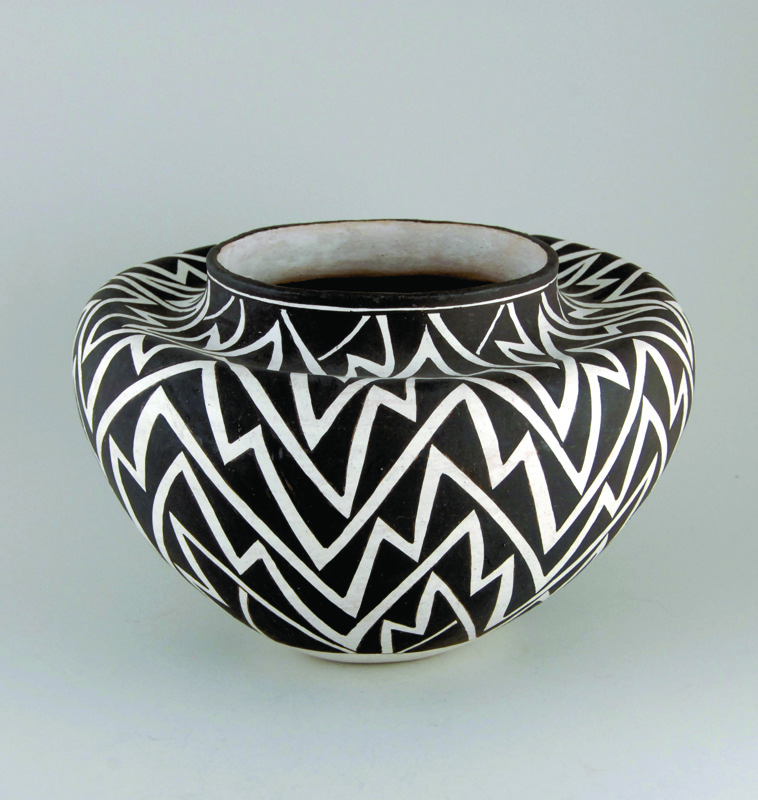 We found the pot near the bottom of a box at the back of our second storage unit in an industrial area of Kingston, New York. Ben is a collector in the way that only people into antiques can understand. Why have one of a particular type of table when you can have five?  Why have three chairs when you can have six broken ones? And  when it doubt, get another storage unit.

He remembered buying the small clay pot at a Goodwill store in Swarthmore, Pennsylvania. It was only a few bucks, but the thin black lines on the white slip ground were mesmerizing. And it was small, only three inchestall, so he’d always have room for it—famous last words. At some point, in some move in his mid-twenties, it was deemed special enough to keep but too special to keep out, so it ended up in the storage unit. Ben had never really looked closely at the bottom of the pot, so he’d never taken note of the name there: Lucy M. Lewis.

To be fair, it wouldn’t have meant much to him at the time. He wasn’t a dealer then; he had approximately no knowledge of American Indian art. Now that we were putting our initial inventory together for our store, though, it was time for Google.

Lucy M. Lewis was born sometime between 1890 and 1902. She started making pottery as a child, following the lead of her great-aunt, Helice Vallo, and other women in their area of New Mexico. There was no formal education available, so she learned clay: the process of digging clay and tempering it with ground pottery shards, and the process of coiling, scraping, and smoothing it. She learned to hold a fired piece gently and to paint thin graceful lines with yuccabrushes. She learned that she came from a long line of potters who had repeated these movements, forming the vessels used for water, seeds, and ceremonies in the oldest continuously inhabited settlement in North America: the Acoma Pueblo, or Sky City, named for its perch atop a 367-foot sandstone bluff.

As Lewis grew older, she began selling her unsigned pots at a stand along US Route 66 for a few cents each; it wasn’t until she was well into her life that she became known as an innovator. According to Tony Chavarria, curator of ethnology at the Museum of Indian Arts and Culture in Santa Fe and an occasional potter himself, Lewis became the undisputed matriarch of Pueblo pottery and was instrumental in the creation of a contemporary global market for native artwork. To do this, she looked to the past.

Lewis took inspiration from found shards of ancient pottery, incorporating their fine-line designs into her work just as she folded crushed pieces of the same ancient vessels into her clay. “Figuratively and literally,” Chavarria says, her work was “made of the past.” As Lewis expanded on the fragments of designs she could find around Acoma, she developed her own patterns. She broke with tradition and started signing and, for a period in the 1960s and ’70s, dating, her pots, using the same black pigment as for the intricate fine-line patterns that cover her most recognizable work.

Greater demand led to higher prices, allowing Lewis to put more time into each piece. Still, she stayed true to simple, typically small forms throughout her career, and passed those designs on to her children.

Pottery has not always been considered an art form. For a long time, clay was craft. There was no room for it in the artistic canon. Similarly, American Indian art was considered artifact. Lewis helped to shift both norms, challenging expectations of what art can be by melding an ancient past with a contemporary vision. Her work, Chavarria says, epitomizes the “multi-vocality” of clay. A single piece tells myriad stories. It’s both “an embodiment of culture,” and “a legitimate art form.”

Charles King, owner of the King Galleries in Arizona and New Mexico, agrees. “It’s taken so long to pull [American Indian pottery] out of anthropology and ethnography and the category of ‘other,’” he says. Finally, people are ready to see it as what it is: true American art.

The market for Lewis’s pieces remains strong, and King believes one reason is that they stand out among the work of American Indian artists of today. “They may not be as perfect as a contemporary potter’s work, but there is an elegance in form and a beauty in design that resonate with people.” For buyers seeking out a Lewis piece, “imperfection within an aesthetic boundary is desirable.”

At the high end of prices for Lewis’s work, a large bowl offered by an established dealer may cost $3,000 to $4,000. A small heavily decorated fine-line olla like ours fetches up to $1,000 in a gallery. Dated pieces are rare, and highly desirable. Even though Lewis pots fetch such high prices, counterfeits, King adds, shouldn’t be a concern. If you are talented enough to fake a Lewis piece convincingly and are working in Acoma today, you could command more for pottery made in your own name. “There is,” he says, “zero incentive” to make fakes.

Lewis passed away in Acoma in 1992, but her pots continue to traverse the globe. Chavarria is candid about contemporary criticisms of American Indian work being taken out of its communities. He comes from a family of Pueblo potters and has always seen their work as deserving of an adventure. They are meant “to go out there, to have a good home, and to experience these other places.”

Within a few minutes of searching for “Lucy M. Lewis Acoma, NM,” we decided to put the little black and white pot into our permanent collection. Today it shares space in a cabinet with an Italian pitcher, a Danish silver tray, and a pair of lotus shoes. It is past, and it is present. It is ancient, and it is revolutionary. It is function, and it is art.