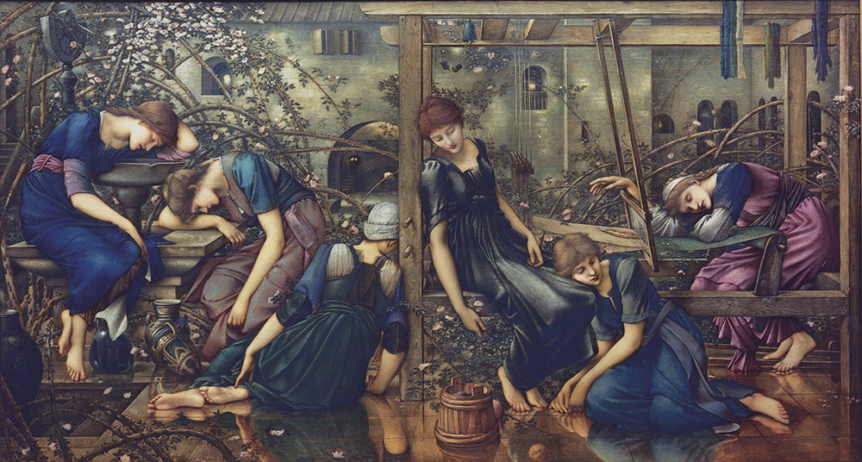 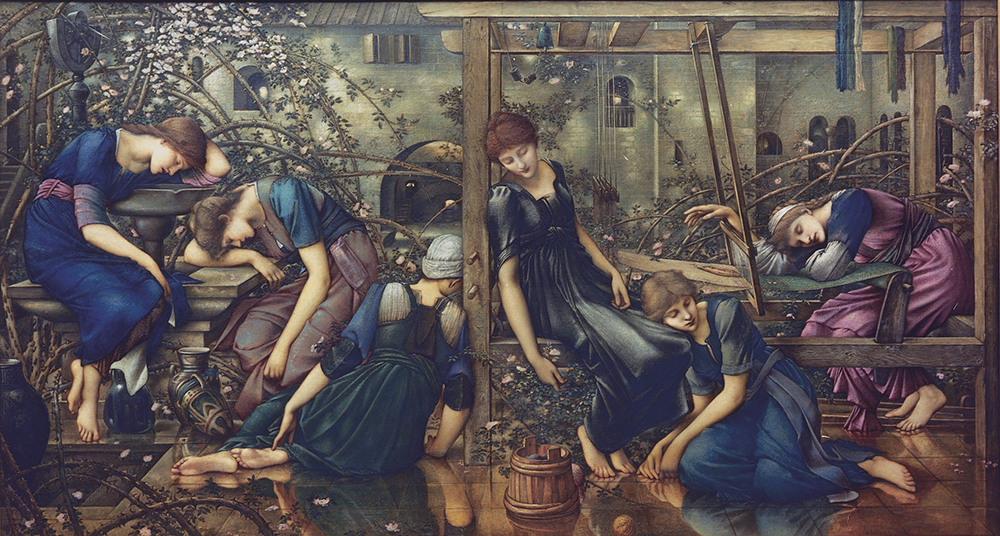 Beloved by many, disparaged by some, the work of the Pre-Raphaelites constitutes one of the most recognizable bodies of nineteenth-century British art. And it is the focus of two important new exhibitions, on either side of the pond. Currently at the Oklahoma City Museum of Art, Victorian Radicals: From the Pre-Raphaelites to the Arts and Crafts Movement features approximately 145 works of fine and decorative arts by such artists and designers as Ford Madox Brown, Edward Burne-Jones, William Holman Hunt, John Everett Millais, William Morris, Dante Gabriel Rossetti, and Elizabeth Siddall. Drawn from one of the richest Pre-Raphaelite troves in England, that of the Birmingham Museums Trust, the show examines how burgeoning nineteenth-century industry, especially in the English Midlands, spurred three generations of artists to revolutionize the arts in Britain. 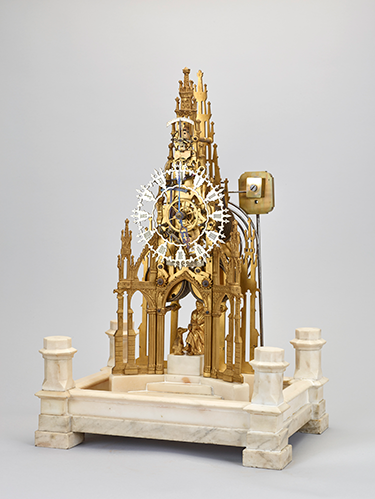 Meanwhile, in London, Tate Britain is presenting Edward Burne-Jones, the first Tate show consecrated to the artist since 1933. It documents his career by gathering together more than 150 objects, including major works that have long been dispersed in collections throughout the United Kingdom and beyond.

The Pre-Raphaelite Brotherhood was born in 1848, a year of political revolutions throughout continental Europe. As thrones trembled beyond the English Channel, three young painters, Hunt, Millais, and Rossetti (who was a poet as well), jointly conceived of their own revolution, an artistic one. Having studied at the Royal Academy, they scorned what they deemed threadbare formulaic practices upheld by that institution. They perceived this academic barrenness to be the legacy of the followers of Raphael, and aimed to reawaken what they felt was a simpler, more direct, more honest style of painting before Raphael’s time, hence their name. Eventually, that name would encompass a variety of approaches and ambitions as the circle around the original Brotherhood expanded to include other painters as well.

Inspired by the sober religious imagery of the early nineteenth-century German painters known as the “Nazarenes” (after Jesus of Nazareth), by England’s Gothic revival and medievalist movements, and by the straightforward imagery of early Renaissance painters like Giotto, they turned to the Bible, to the poetry of Keats and Tennyson, and to Shakespeare for subject matter. Most important, many of them were inspired not to work up their narrative compositions in the studio from sketches and imagination, but to paint—especially backgrounds to their figures—directly from nature, and to do so outdoors. English critic John Ruskin was particularly influential in this. 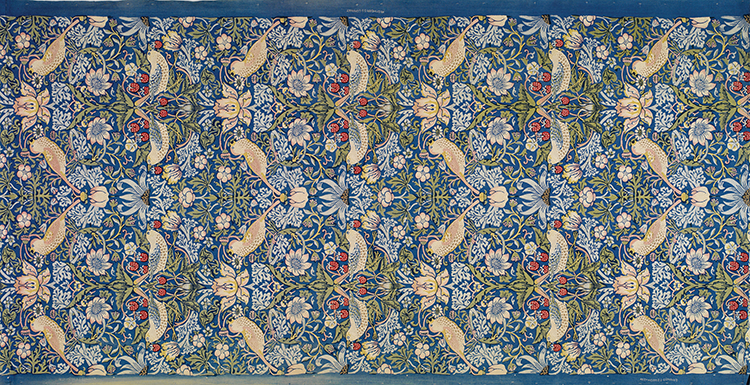 The initial works of the Pre-Raphaelites startled viewers with their deliberate archaism, and especially their brilliant color, spurning the academic tradition of applying a dark undercoat to the canvas before painting their composition—which lent the work of their contemporaries the comfortable, patinated appearance of an old master. Millais, Rossetti, and their confreres sought to achieve the effect of daylight through stained glass by preparing their tautly stretched canvas or panel with a smooth ground of zinc or lead white, and then painting in bright, bold, often semitransparent colors. Moreover, instead of loose, virtuoso brushwork, which they dismissed as “slosh,” they emulated the meticulous style of Dürer and Holbein, delineating every meaningful detail of their gures, costumes, and settings with almost microscopic precision.

Technical points aside, for all their devotion to early Renaissance and medieval art, the Pre-Raphaelites viewed themselves as completely modern, indeed, innovative. Although they were initially bound together by a common philosophy, they each developed and maintained their own personal style. This is especially distinctive in Rossetti’s ethereal work, and it was not mere chance that this distinctive quality was brought to its zenith by his greatest admirer, the Birmingham native Edward Coley Burne-Jones.

After the original Brotherhood disbanded in 1853 Rossetti was instrumental in conveying its influence to a new generation of artists, notably Burne-Jones and his fellow theology student at Oxford, William Morris. Together, the three redefined Pre-Raphaelite ideals by gradually replacing the precise realism and moralizing subjects of the earlier period with a rich and beguiling strain of romantic medievalist imagery. To this the entrepreneurial polymath Morris and others such as William De Morgan contributed a heightened sense of design through which, beyond painting, Pre-Raphaelite themes could be applied to stained glass, tapestry, and an array of domestic furnishings including wallpapers, fabrics, carpets, ceramics, metalwork, and cabinetry.

Burne-Jones and Morris are very much the center of the later Pre-Raphaelite generation, which included such artists as Henry Holiday, John Melhuish Strudwick, Marie Spartali Stillman, Simeon Solomon, Sidney Harold Meteyard, and John William Waterhouse. While they perpetuated later Pre-Raphaelite ideals into the early decades of the twentieth century, it’s worth observing that in terms of maintaining a visual Pre-Raphaelite identity, none of the earlier members of the Brotherhood circle were emulated in as distinct a manner as Burne-Jones emulated Rossetti and as others emulated Burne-Jones. 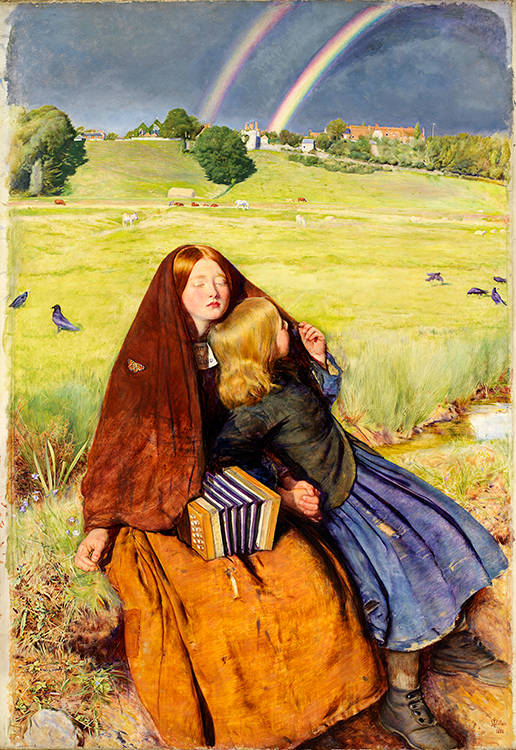 Dreamlike is a particularly apt description of Burne-Jones’s work, especially as many of his protagonists are either sleeping or in a trancelike state. Contributing to this mood is his preference for subdued light—the light of other days, of dim recollections viewed behind closed eyes. He was very much the late Pre-Raphaelite in his preoccupation with classical and Arthurian mythology filtered through Tennyson and through the writings of his friend Morris, but with a sensuality entirely his own.

He exults in a sense of suspended realism wherein a highly significant, even violent action seems momentarily frozen. The characters themselves seem to be speechless, communicating like dancers through meaningful gestures—indeed one often feels that such Burne-Jones paintings as those in the Perseus and the Pygmalion series call for an accompaniment of soft music—Debussy’s Pelléas et Mélisande or the contemplative passages in Elgar’s oratorio The Dream of Gerontius.

Moreover, Burne-Jones’s compositions are striking for their sense of confined space—a Rossettian characteristic, but also inspired by the primitive perspective of early Renaissance painting. His figures exist in patently unrealistic surroundings: narrow rooms, high-walled gardens, misted Wagnerian mountainscapes. And he heightens the unreality by flouting the rules of perspective. 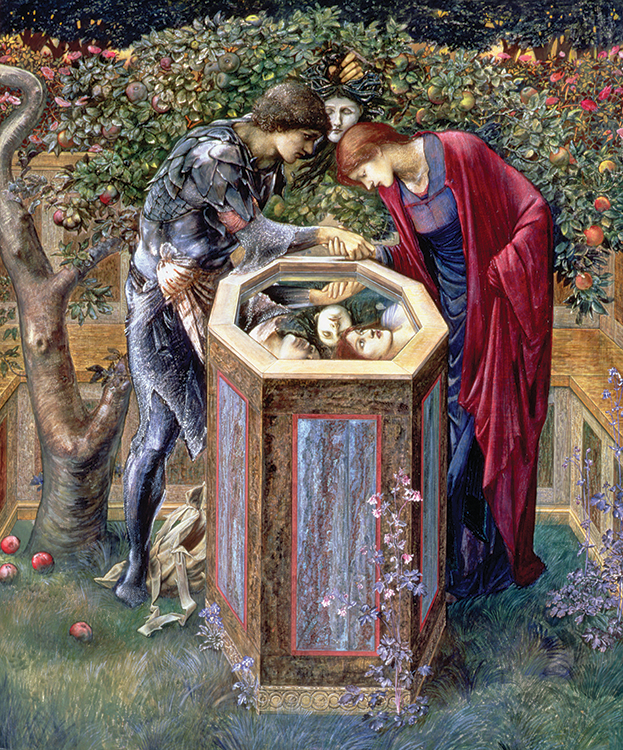 In The Baleful Head (Fig. 6), from his Perseus series, the ancient hero shows Medusa’s severed head to Andromeda. They stand before a screenlike expanse of apple boughs, and the polychrome marble font in which they view the reflection of Medusa’s head is drawn with a deliberate naive perspective reminiscent of a thirteenth-century Italian fresco. But Burne-Jones’s skilled deployment of these archaisms furthers the illusion that he wields a fairy wand rather than a painter’s brush.

Burne-Jones’s King Cophetua and the Beggar Maid (Fig. 7) is a striking example of the power of this overlying dream quality. It depicts a scene in Tennyson’s brief lyric “The Beggar Maid,” itself founded on an old ballad of an imaginary African king who, after disdaining all women, falls in love with a beautiful beggar maid and makes her his queen. Burne-Jones’s canvas is like an enormous manuscript illumination, more than twelve feet tall in its frame. The eye is drawn in a serpentine curve upward from the importunate figure of the king (in fantastic armor and holding a fantastic crown) to the maid herself. It continues further upward to the two singers and out to the glimpse of landscape beyond the cloth screen. The characteristic shallow depth of field is emphasized by the vertical thrust produced by the narrow, carved balusters and foreshortened horizonatals of the architectural surroundings—a thronelike inglenook. Burne-Jones’s beggar maid is extraordinary: arresting, her fixed stare hypnotic. If she walked among us, she would be unsettling.

In general, Burne-Jones’s figures are a race of angels, their pale skin untouched by the sun. His female nudes exude a potent combination of chastity and eroticism; his long-legged male nudes, however androgynous their faces, recall the splendid muscularity of figures by William Blake. Pre-Raphaelite intensity may seem leagues away from art nouveau decadence, but it’s a short jump from these often vine-entangled seraphim in their noiseless world to the naughty, bloodless creatures and curvilinear surroundings drawn by Aubrey Beardsley during his brief hour of fin de siècle notoriety.

Burne-Jones, who died in 1898, perhaps summed up his own Pre-Raphaelite philosophy best when he said to Oscar Wilde: “The more materialistic science becomes, the more angels shall I paint: their wings are my protest in favor of the immortality of the soul.”*

Victorian Radicals: From the Pre-Raphaelites to the Arts and Crafts Movement, organized by the American Federation of Arts in collaboration with Birmingham Museum Trust, is on view at the Oklahoma City Museum of Art to January 6, 2019, and will travel to six more US venues through January 2021.

Edward Burne-Jones is on view at Tate Britain through February 24, 2019.