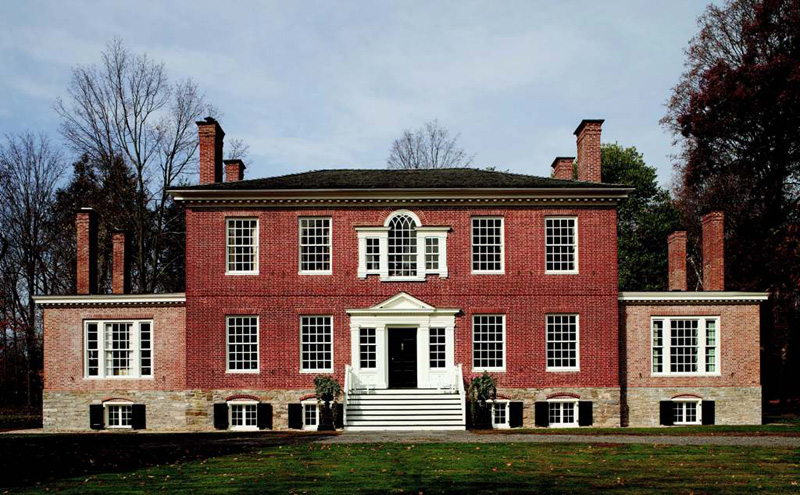 Furnishing the interiors of a historic house should strike a delicate balance: remaining faithful to period and context, yet reflecting the taste and lifestyle of the current owners. In a stately Georgian manor house in Kinderhook, a historic village in upstate New York, Audrey and Stuart Peckner have met the challenge with a mix of furniture and objects-the result of more than three decades of dealing in and collecting antiques-arranged in rooms that, despite their museum-worthy contents, convey a lived-in feeling suggesting several decades of occupancy.

In fact, the Peckners have lived there full time for only two years. Purchased in 2005 as a second home, the house became a major restoration project that involved several years, more money than anticipated, and countless hours overseeing renovations and repairs to the infrastructure-replacing the roof and underpinnings, new flashing and brickwork, repairing all eight chimneys, burying electrical wires, and replacing rusted or broken pipes. Rudimentary porches on the front, rear, and sides of the house were built anew. And dozens of the trees that made the six-and-a-half-acre site more forest than lawn were cut down: “An eighteenth-century house,” Stuart Peckner explains, “wouldn’t have so many plantings.”

Although Kinderhook had been the site of their first venture into the antiques business in the 1980s, the Peckners had lived in West Palm Beach for almost three decades, establishing N.P. Trent Antiques as one of the most prestigious dealers in an area they pioneered into an established Antiques Row. They developed a thriving business in English and European furniture and objects, purchasing entire estates from local sources and acquiring exceptional pieces on frequent trips abroad.

They rediscovered the Hudson River valley on a vacation trip eleven years ago, and were won over by its architecture, history, and its easy access to big-city amenities by Amtrak or air. The Kinderhook house was intended to be a summertime respite from the Florida heat, but spending time in the area convinced the Peckners that they wanted to relocate, and that a burgeoning population of artistic and culturally inclined residents promised favorable business prospects as well. Two years ago, they closed the Florida shop and opened a new one in the rapidly gentrifying town of Hudson, a few miles from Kinderhook. They sold their Florida house and moved north in November 2013, bringing their furnishings with them.

The house itself, facing on one of the pleasantest streets in Kinderhook village, is something of a hybrid. It was designed and built just prior to the Revolutionary War by David Van Schaack, a prosperous descendant of early Dutch settlers. A substantial brick mansion, two stories high, it has a symmetrical classical layout, with wide central halls on both levels and comfortably high-ceilinged rooms. Traces of its Dutch heritage remain in the tall windows with broad window seats, and the decorative blue-and-white tiles on an upstairs mantelpiece. The main section dates to 1772 while a subsequent owner added the symmetrical side wings around 1820. Also in the nineteenth century, a rear wing was added to accommodate the kitchen-originally located in the basement- along with living quarters for slaves. (A “colored cemetery” remains in the land behind the house.)

The Van Schaack mansion is steeped in history. Kinderhook lies on the direct route between New York and Albany, and thanks to its affluent and well-connected owners, the house became a convenient stopover during both the Revolutionary period and the early years of the new republic. In 1777, after the Battle of Saratoga, defeated British general John Burgoyne spent the night there as a prisoner of war en route to Albany, and a chatty 1878 magazine article titled “An Old Kinderhook Mansion” notes the succession of visitors under various owners over the years, including Benedict Arnold, John Jay, and Alexander Hamilton. Occupants after the Van Schaacks included a chief justice and later governor of Vermont and a celebrated physician who entertained ex-President Martin Van Buren, Henry Clay, and Washington Irving.

Most of the original furnishings in the house were imported from England, including furniture and Wilton carpets. Respecting its illustrious history, the Peckners have filled the rooms primarily with English pieces, almost all dating from the eighteenth century, in a mix that incorporates American, East Asian, Italian, German, French, and Spanish objects, the whole unified by a keen eye for complementary forms and appropriate scale. There’s also considerable concern for function, in ample seating and in such amenities as a nineteenth-century dining room sideboard that’s a bit out of sync with the other furnishings in the room, but boasts capacious storage space. Each room is amply furnished, befitting the generous proportions of the spaces, and furniture is arranged with entertaining in mind-an abundance of chairs, which are unquestionably the Peckners’ favorite form. “We started out in this business loving chairs, and we just kept buying them,” Audrey Peckner explains. In every room, the eye is drawn to clusters of well-chosen accessories, many with intriguing backstories of where they were found or how they were used. Evidence of the Peckners’ addiction to reading, some of their encyclopedic collection of books are tucked into corners and stacked on shelves or-in the parlor/reading room-on the floor, just waiting to be read. (As an offshoot of the antiques business, the Peckners have developed a lively trade in old books, some through their store but the majority online.)

The main level of the house, approached by a half-circle pebbled driveway, opens onto a grand two-story entrance hall, with walls painted to suggest stone blocks, and a graceful curving stairway with dark mahogany railings (Figs. 3, 3a). Flanking it, the living and dining rooms have matching Italian crystal chandeliers, but almost nothing else in the rooms is symmetrically arranged or deliberately balanced, with the result that none of the interiors-Audrey’s handiwork-look “staged.” Except for the set of eight Georgian dining chairs, there are no “matched suites.” The result is refreshingly unpretentious, very much like the owners themselves.

The floors throughout most of the house are narrow-board polished northern pine (the Peckners removed wall-to-wall carpet on the first floor and stripped the floor in the entry to remove stenciled decoration applied by the previous owner). Every room has a fireplace, no two of which are alike. In the nineteenth century the original wood mantels on the main level were replaced with more elaborate marble ones that, though all different in style and coloration, are a congenial fit with the mix of furnishings. The three bedrooms upstairs have simpler wood mantels, one dating to the original owner, with hand-painted Dutch tiles.

The Peckners take their time deciding what changes will best suit the interiors. The walls have been left as they found them, in several two-tone painted schemes, with occasional faux finishes, and-in the dining room-the rough residue from removing wallpaper. Rather than disturbing the harmony of the spaces, the random mix adds to the overall air of informality. The walls are hung with a variety of works. “We have a little bit of everything,” Audrey says-English prints, American oil paintings, Chinese export porcelains, floral embroideries, still-lifes, and dog pictures.

In these unpretentious settings, none of the pieces, even the most exceptional among them, calls out for attention, though on closer examination, examples of fine craftsmanship and distinctive ornamentation offer unexpected delights. To the Peckners, an object’s provenance is less important than its personal appeal-as evidenced by their tendency to downplay scholarly details or designer names, calling attention instead to unconventional details or unique forms. “We like things you don’t often come across,” Stuart says, like a striking cockpen wing chair just inside the front door, a tea caddy in the shape of a house, a four-panel chinoiserie-painted leather screen used as a headboard in a guest bedroom, a French commode chair in another bedroom upstairs.

“I tell people that I put what I couldn’t sell into the house,” Stuart jokes. That clearly isn’t so, as the furnishings include some of their most treasured possessions. Asked to cite the rarest among them, Stuart picks a Georgian rent table in the upstairs hall and a Chippendale console table in the entry hall. Audrey describes the console as a “perfect piece of furniture,” but picks an oval gilded looking glass attributed to John Linnell in the sitting room as the piece she’d likely rescue first in an emergency (Fig. 6).

As to where they buy things, the Peckners admit that they no longer have to shop-the house and the Hudson store were outfitted mostly from what they already owned, and two rented warehouse spaces are filled to capacity with additional items. But that clearly doesn’t stop the couple from buying more: “We love to shop,” Audrey says, and Stuart adds, like any committed collector, “We like stuff- it’s a real sickness.” Now they have a further excuse; Hudson’s thriving retail area has morphed into something of a tourist destination, prompting them this past summer to move the antiques business closer to home, to a renovated building on the Kinderhook town square. It boasts ample display space for their copious offerings, as well as storage facilities. “We’d like to make it a destination stop for serious collectors rather than casual shoppers,” Stuart explains.

Though the Peckners seem to consider their house a work in progress, discussing appropriate paint colors and finishing details they haven’t had time to deal with, everything in Kinderhook looks very much at home. A visitor to the Van Schaack mansion in 1786 described it as “a house of good old-fashioned hospitality.” Thanks to the Peckners, it still is.

Judith Gura, a specialist in the history of interiors and furnishings, writes and lectures widely on those subjects.