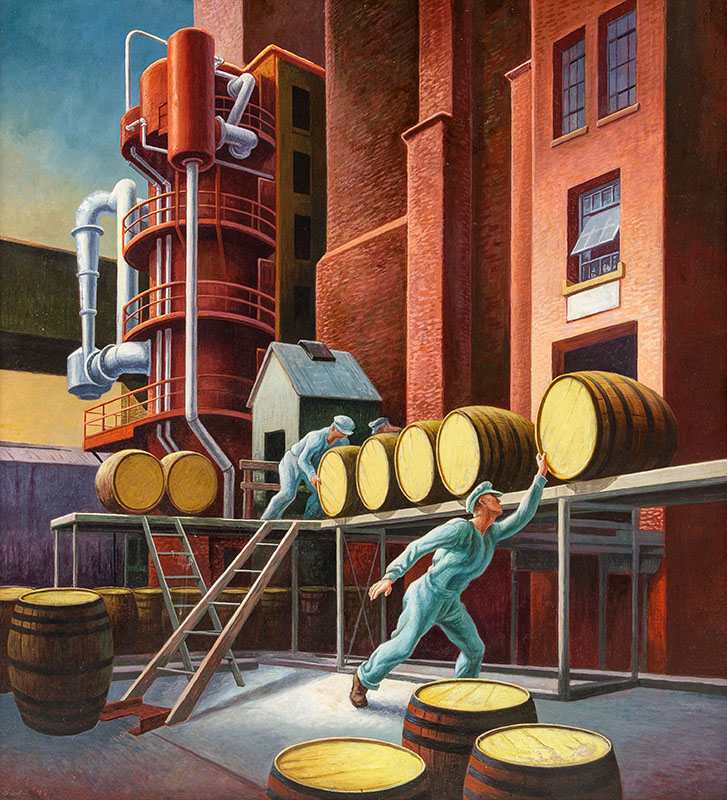 Back in the 1940s, when the universe of household names was smaller and folks like Frank Lloyd Wright and Ernest Hemingway were as familiar to the public as any Hollywood star, distillers Hiram Walker-Gooderham & Worts commissioned artist Thomas Hart Benton to create an image for an Imperial Whiskey advertisement. On October, 17, that work is the star of a group of paintings consigned by Makers Mark Distillery included in the Hindman Auctions sale of European and American art in Chicago.

The advertisement based on Benton’s Whiskey Going into The Rackhouse to Age, or Whiskey Barrels, 1945 (Est. $600,000 – $800,000) ran in the June 3, 1946 issue of Life magazine. While the figures in the canvas are rendered with the undulating fluidity typical in the artist’s work, the industrial setting led Benton to paint in a somewhat precisionist manner, suggests Anastasia Standa Hall, senior specialist in fine art at Hindman. “Collectors of American regionalism who are purists may not find this appealing,” she says, “but others will find it interesting to see the artist working outside his more recognizable motives.” (Distillery commissions painted by Aaron Bohrod, Franklin Boggs, and Zoltan Sepeshy, among others, are in the auction, as well).

Benton was introduced to Hiram Walker and other clients, including the American Tobacco Company, by dealer and entrepreneur Reeves Lowenthal, who brought lithographs by name artists to the masses through his Associated American Artists. Although Benton eventually soured on advertising commissions, of the men he met in that business he recalled: “They were, generally speaking, good company, good drinkers, good storytellers and good commentators on the vanities of the world.”