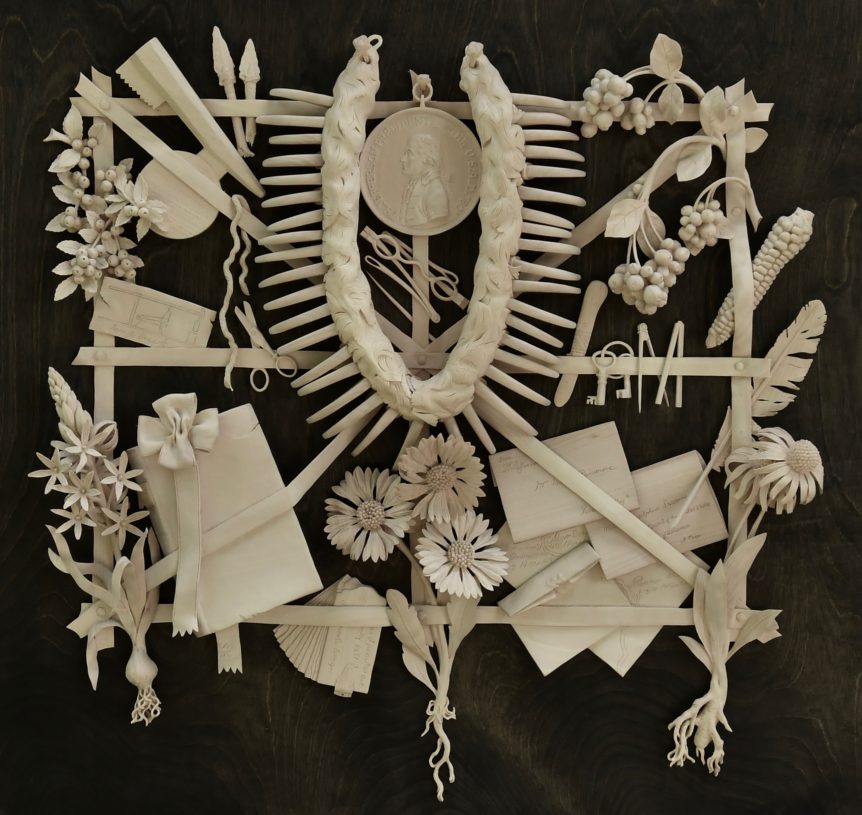 In 2014 I received David Esterly’s The Lost Carving: A Journey to the Heart of Making from someone who knows me well. The book is a dramatic meditation on many things, among them skill, craft, and creativity, by a master carver and a masterful writer. On page twenty-seven I found the passage that I guess I was meant to find, one that could easily serve as my first sentence were I to write about my years editing a magazine devoted to the arts of the past—something I will not be doing. Here it is:

This anachronism, this most discardable of professions, this repository of everything scorned by contemporary art, of beauty, skill, nature, feeling, tradition, sincerity, this throwback, this lost cause so hopelessly at odds with the present age, nonetheless seems to me a glinting fountain of symbols. Thinking about wood-carving, you think about the world. Well, I do anyway.

Thinking about the arts of the past, I think about the world. Let that be my epitaph. 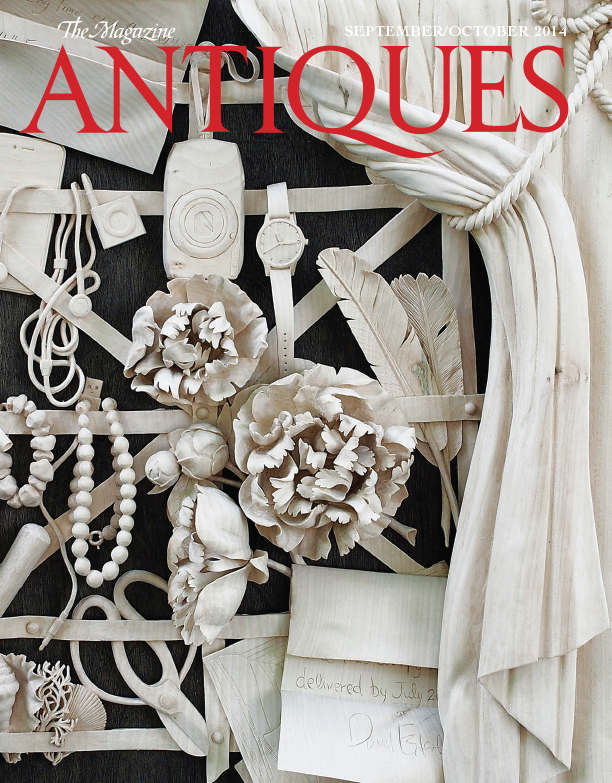 Soon after I read the book we showed one of Esterly’s letter-rack carvings, a witty composition evoking built-in obsolescence and durable beauty, on the cover of the September/October 2014 issue of ANTIQUES. It was accompanied by his article about the centuries-long tradition of letter-rack paintings and his own twenty-first-century improvisations in three dimensions. He was, he wrote, drawn to the tension between the geometry of the letter rack grid and the warmth of its living content. I think he was also drawn to the stories such compositions invite us to read in them as well as the ones they allow us to invent for ourselves.

“Carving is a metaphor for everything,” Esterly writes, and I find that, like all metaphors, his carvings are open at one end for associations of our own to flow in. He encourages that. “After a few days away from a piece it’s as if somebody else has made it and I feel as though my reaction to it is hardly privileged above somebody else’s,” he wrote in a note to me. In his recent work, an imagined creation of Thomas Jefferson’s letter rack, the ghostly grid of objects carved in limewood gathers the carver’s sense of our most complicated Founding Father while leaving room for our own Jeffersonian thoughts.

The starting point for the work was Jefferson’s commission of the 1804–1806 Lewis and Clark expedition, in part because Esterly’s patrons for the piece are originally from the Northwest. But beyond that association, he thought setting this imaginary letter rack in the Lewis and Clark years “would give it a distinct theme: the collision between Jefferson’s European rationalist Enlightenment sensibility and the pre-rationalist tribal world encountered by the expedition.” And so, Jefferson’s likeness on the classical Peace and Friendship medal in the carving is encircled by a grizzly-bear-claw necklace brought back by the explorers. (The necklace and the Lewis and Clark–era arrowheads and Indian pipe bowl in the piece are modeled on originals in the Peabody Museum at Harvard, where Esterly studied them; the president’s spectacles, porcupine quill toothpick, ruler, keys, and so forth are based on ones at Monticello.)

Complications and contradictions, collisions and ironies, the world of our third president: “Within Jefferson’s own sensibility,” Esterly goes on in his note to me, “there is his internal collision too, between Enlightenment rationalism and an unacknowledged world of non-rational turbulent emotion.” The bonnet ribbon in the carving bears the initials S H for Sally Hemings, Jefferson’s slave and mistress, in acknowledgment of this collision. The ribbon is the artist’s invention and appears here as a bookmark. I like that. To my mind a bookmark tells us where we are and where we have been. That particular association may not have been in Esterly’s mind at the time, but I know he won’t mind it being in mine. “I have the idea,” he says, “that the viewer somehow picks up unconsciously the idea that this is not just a mechanical execution of an idea but a dynamic process, and that accounts for some of the pleasure the work gives.” 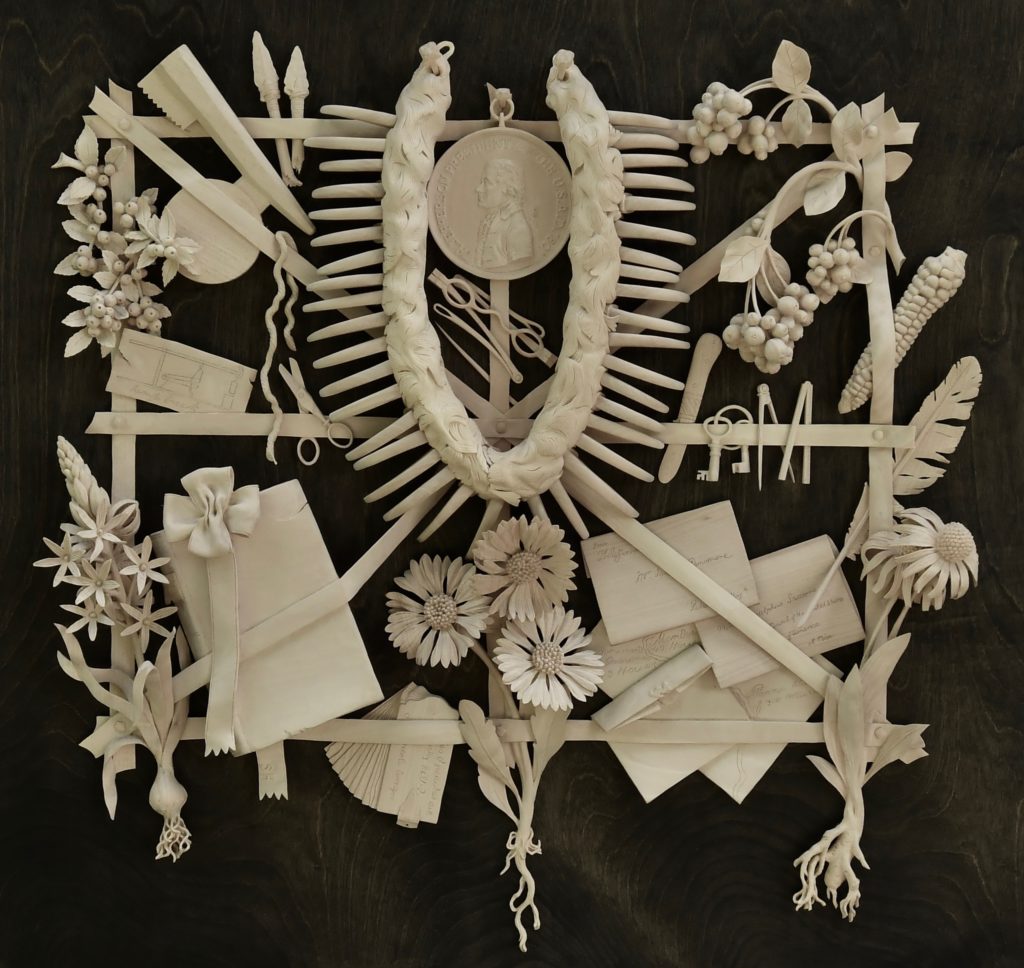 If we are in the realm of metaphor here, we are by necessity also open to the natural world. The botanical specimens Lewis and Clark collected were as important to the passionate plantsman in Jefferson as anything else about the expedition. They are translated into wood here and they give Esterly’s carving its fluency and warmth while reminding us of Jefferson’s agrarian/egalitarian vision: he thought, or hoped, we would become a nation of yeoman farmers. Esterly discovered that Jefferson was interested in grids, and that in mapping the West the Jeffersonian grid envisioned no center of power, no dominance of one place over another. And then, in one more metaphor, the artist remarks, “well, that didn’t work out in America and it didn’t work out with his letter rack either.”

As I consider this carving I go back to that quote from the artist’s book and ask whether this particular “glinting fountain of symbols” is, in fact, hopelessly at odds with the present age, or does it, by translating our past into the silent language of limewood, suggest new ways to tell the story? I think it does.

This story originally appeared in the August 2, 2017, edition of “Dispatches,” Elizabeth Pochoda’s new “sporadical e-newsletter about the arts of the past as they live in the present day.” For subscription information, visit themagazineantiques.com/dispatches. 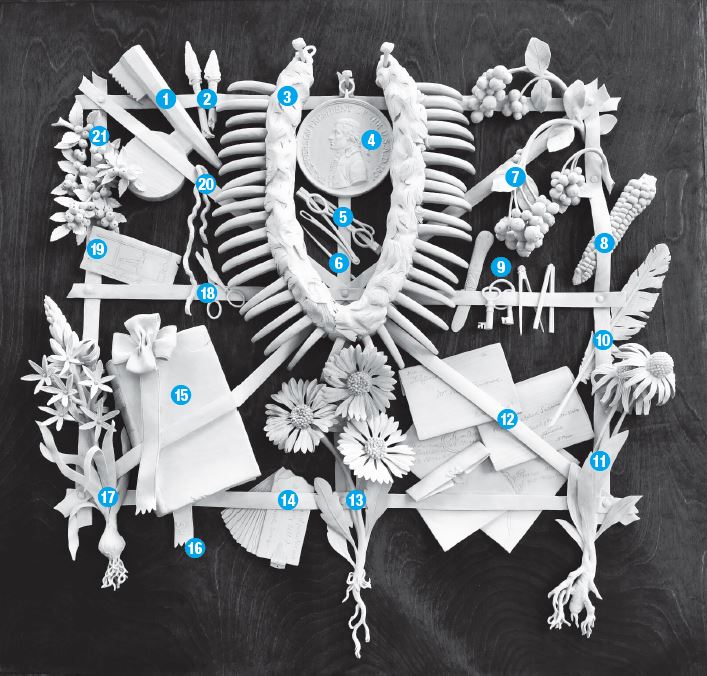