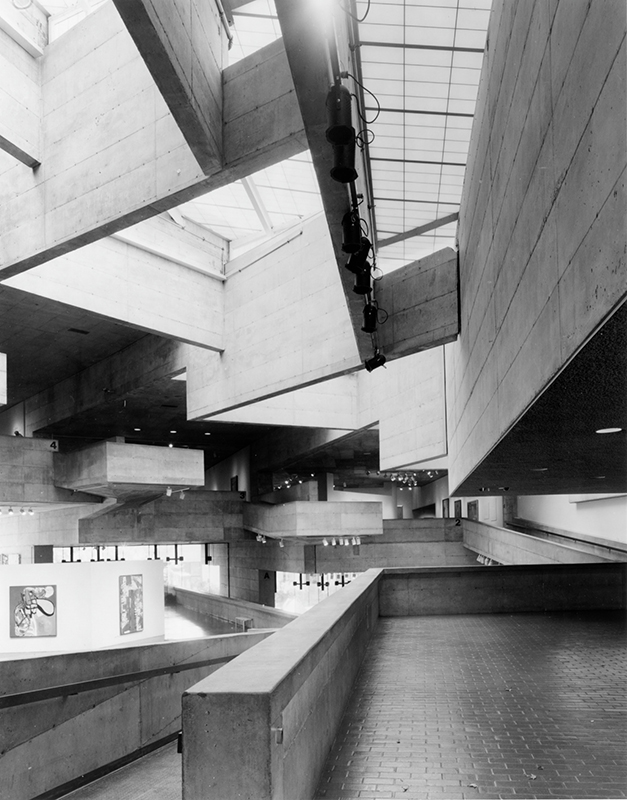 The name makes for an ungainly acronym—one used by virtually every member of the public and which, when pronounced aloud, approximates the sound of an overripe cantaloupe hitting a linoleum floor: BAMPFA.

But that is about the only inelegant thing about the Berkeley Art Museum and Pacific Film Archive.

BAMPFA has many constituencies and serves them all with aplomb. As the art museum of the University of California at Berkeley, the crown jewel of the state’s educational system, BAMPFA has teaching as its core responsibility. At the same time, the museum’s home of less than three years is off-campus in the city center, giving the institution an additional civic and—in keeping with the evolving role of such places—social duty. Finally, there is the timeless mandate of all ambitious institutions of high culture: to honor the arts of the past while fostering the arts of the present. “Our mission is to inspire the imagination, ignite critical dialogue, and activate community engagement through art, film, and other forms of creative expression,” says Lawrence Rinder, the museum’s director since 2008. “While we are first and foremost the visual arts center of the university, our audience extends much further. We see ourselves as a dynamic hinge between the campus and the world.”

A connection to the wider world is a central reason BAMPFA exists in its present-day form, and the work of the man chiefly responsible for that existence is being celebrated in an exhibition at the museum right now: the legendary artist, teacher, and color theorist of abstract expressionism Hans Hofmann. To explain all this, it’s necessary to backtrack twice.

To begin, for several decades UC Berkeley’s art collection consisted almost entirely of a group of paintings—including Albert Bierstadt’s Yosemite Winter Scene (1872)—donated a few years after the school’s founding in 1868 by a San Francisco financier named Henry Douglas Bacon. They were displayed in a small gallery in a library building named for Bacon. The school’s first building dedicated solely to the exhibition of art was the Powerhouse Gallery, which remained in use for nearly forty years. It opened in 1931 in a small brick building that had formerly housed a power plant.

The story of Hofmann and UC Berkeley began the year before. Hofmann had opened his first art school in Munich in 1915, unable to return to France, where he’d been painting and studying, following the outbreak of World War I. By 1930 one of his former students, Worth Ryder, was a member of the Berkeley art department faculty and he invited Hofmann to teach during that year’s summer session. Hofmann did and returned the following summer. He became so enamored of life in the United States—and fearful of the political situation at home—that by 1932 he was living full-time in New York. He taught art classes there and, during summers, in Provincetown, Massachusetts, training a generation of artists that included Lee Krasner, Helen Frankenthaler, and Red Grooms.

But he never forgot the institution that brought him to this country. When Ryder died in 1960, Hofmann gave a painting to Berkeley in his honor. He would make gifts of forty-five more paintings to the university—one of them double-sided and since split. As important, Hofmann had long wanted to establish a relationship with a museum to guard his legacy. In 1963, when in his early eighties, he formalized an arrangement with Berkeley that included a donation of $250,000—well over $2 million in today’s dollars—toward the building of a new museum.

The quality of BAMPFA’s guardianship of the artist’s memory is clear in the current exhibition Hans Hofmann: The Nature of Abstraction, on view until July 21. (In September, the show travels to the Peabody Essex Museum in Salem, Massachusetts.) A survey of Hofmann’s entire career as a painter, the exhibition demonstrates how much he experimented in his work and includes lesser-known paintings from the 1930s and ‘40s as well as the “slab” abstractions of the next two decades, for which he is best known. Those paintings manifest his “push-and-pull” theory of color. As the show’s organizer, BAMPFA’s curator emerita Lucinda Barnes, explains, colors work like opposing magnets in Hofmann’s work, attracting and repelling, creating depth and movement. “He was trying to articulate the forces of nature in painting,” she says.

Hofmann died in 1966 and did not live to see how well the museum spent his money. The doors to the Berkeley Art Museum—a brutalist concrete structure designed by San Francisco architect Mario Ciampi—opened in 1970 on Bancroft Way. (The Pacific Film Archive was inaugurated in 1966, but wasn’t included in the institutional name until 1996.) The cavernous interior featured jutting angles, cantilevered balconies, and other suspended masonry. What made the building interesting architecturally—perhaps too interesting for an art museum—may have doomed it. Following the 1989 Loma Prieta earthquake, UC Berkeley undertook a campus-wide building survey. In 1997 the museum was deemed seismically unsafe. An elaborate system of steel braces kept the building usable for several years, but the museum departed the structure in 2014.

The downtown museum building that opened in 2016 was designed by the New York firm of Diller, Scofidio, and Renfro. It marries the university’s former printing house, a rectilinear 1939 art deco affair, with a new wing clad in stainless steel that seems to drape itself over the older building. A giant LED video screen is installed in the facade of the new wing, which is mainly given over to the film archive. Some 450 screenings are presented a year, and the wing contains two large theaters and the film library, which holds more than sixteen thousand movies and videos.

The spacious old printing house makes for perfect exhibition spaces, and has a sawtooth-windowed roof that allows natural light into the galleries. The museum has none of its collection on permanent view, but Rinder says that he wants to “see the museum represent the full range of its holdings, from Old Masters to early modern art to contemporary work in thematic exhibitions that keep the museum dynamic.” The notions of range and dynamism were evident in the very first exhibition presented in the new museum. Entitled Architecture of Life, its theme was the search for form and order inherent in all human endeavors. The show included an amazingly diverse group of artworks that included Wilson Bentley snowflake photos, eighteenth-century scientific drawings, baroque lace, Gustav Caillebotte’s 1876 depiction of an iron bridge in Paris, Le Pont de l’Europe, and the wonderful improvisational quilts of the late California artist Rosie Lee Tompkins.

Social engagement is a priority for BAMPFA, and perhaps the most attractive of its regular evenfts is the evening performance arts program called “Full” that it stages each month on the night of the full moon. The presentation in May comprises dances by Latanya D. Tigner and Erik Lee. And as Rinder notes, that event will receive “free advertising from the cosmos.”