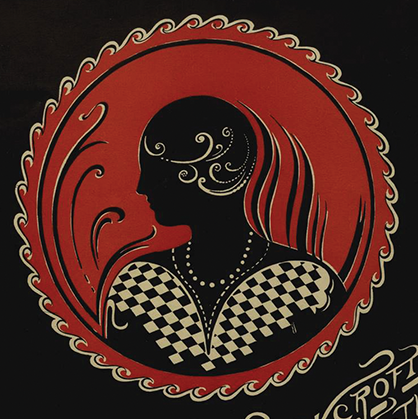 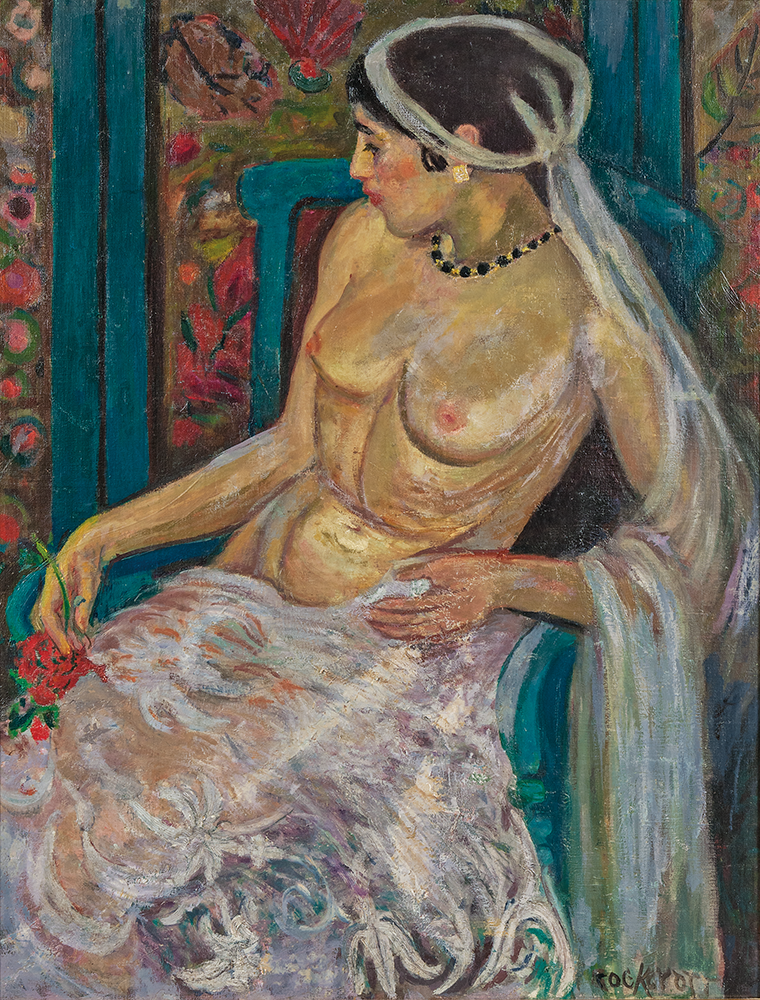 In the 1920s the artist Edith Varian Cockcroft reached a peak of fame. A Brooklyn native, she had earned rave reviews for paintings of seated nudes and windswept coastlines, and she designed blouses known as the “Silk Sensation of 1922!”1 Journalists explored her couture workshop in midtown Manhattan, “a most profitable venture”2 that employed up to three hundred people3 and was said to generate $50,000 in annual royalties4—about ten times the era’s average salary. She explained that she had honed her cosmopolitan tastes since her girlhood in Paris, which she had spent “among peasants and a few artist friends.”5

She may have colorized her résumé a bit; her interactions with French peasants were likely brief, and money troubles continually plagued her. It is hard to separate fact and fiction, since few of her papers have surfaced. What is documentable is that she painted outdoors from Cornwall, England, to Haiti, exhibited in dozens of high-profile places, and produced textiles, theater sets, and ceramics based on precedents as varied as Javanese batiks and sailors’ tattoos. In old age she remained innovative,6 and now there is renewed scholarly interest in her life and work. 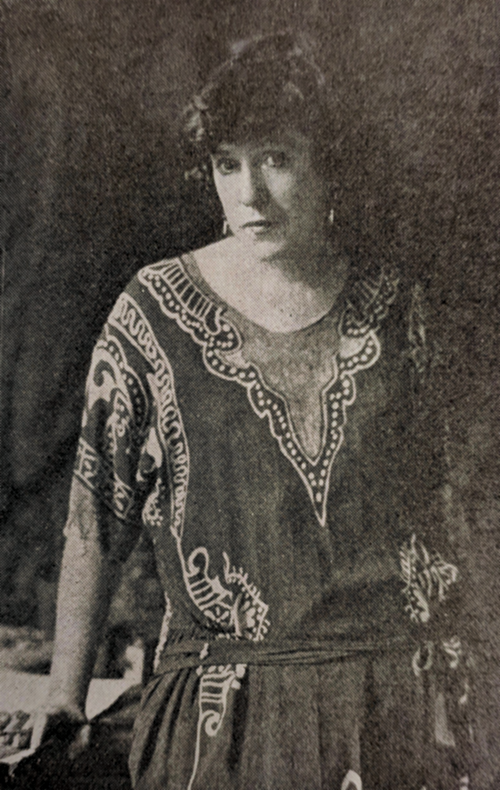 Fig. 2. Cockcroft wearing one of her silk blouses in a photograph
by Salvatore Tornello, published in The Woman Citizen, 1921. Courtesy of Eve M. Kahn.

She was the younger of two daughters of Robert (1847–1924) and Agnes E. Cockcroft (née Chase; 1846–1941), who lived in the Williamsburg section of Brooklyn. They descended from early Dutch and Huguenot settlers in New York. Branches of the family owned substantial real estate, including stretches of Manhattan waterfront.7 At some point Cockcroft studied painting with William Merritt Chase.8 At age twenty-one she organized a one-woman show of portraits at her home, including a tableau of “sea maidens” preparing “to dash into the waves.”9

By 1908 she was spending months at a time overseas while occasionally returning to New York.10 In Paris, Brittany, and Cornwall, she depicted harbors, street vendors, and religious processions.11 Her impasto oil daubs on canvas and panel give suggestions of embroidered aprons, stone carvings, and nuns’ headpieces. The paintings won over jurors at the National Academy of Design, the Pennsylvania Academy of the Fine Arts, and the Carnegie International in Pittsburgh. In 1909, at the Paris Salon, the Russian collector Ivan Morozov took home her Concarneau snow scene (Fig. 5), to hang alongside his works by Picasso, Cézanne, and van Gogh. Cockcroft also traveled in New England; she swirled impasto clouds over images of Maine fishing villages and juxtaposed circus performers and elephants with prim whitewashed cottages in Provincetown, Massachusetts. 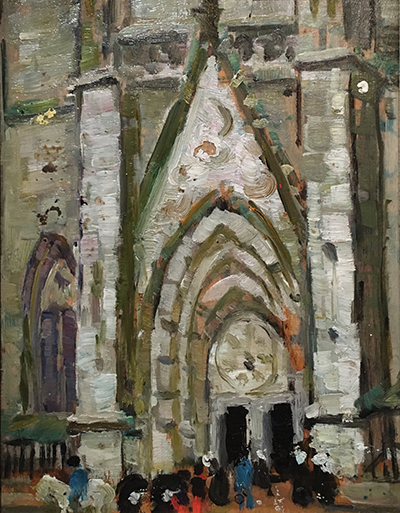 Newspapers praised the “ardor or roughness” of her landscapes12 and the “vital characterization” in her portraits.13 She signed paintings without her first name, so critics often mistook her for a man. “He is as daring in his use of adjacent primary colors as any,” the Christian Science Monitor noted in reviewing her views of Breton fishing boats.14 In the 1910s she “shocked the conservative by her emphatic nudes,” showing half-draped or undraped women roaming forests or lounging on colorful sofas (Fig. 1).15 Critics lauded her varied flesh tones, representing “the texture and color of humanity.”16 In New York she participated in largely male group shows organized by dealers such as Henry Reinhardt. When she was deemed “the boldest adventurer of the group” at one otherwise all-male exhibition,17 some of the men “were sorry they let her in.”18

Around 1914, Cockcroft married Charles L. Weyand (1867–1937), a Brooklyn native of Bavarian descent who ran a construction company. The couple moved into a midtown Manhattan apartment. In 1917 his business failed. “Every cent we had in the world was gone,” she told the Brooklyn Daily Eagle.19 By then she had begun experimenting with batik clothing; she dyed silk and velvet with traditional wax-resist methods and then painted the surfaces with what she called “a bizarre design.” She brought a sample batik gown to a Fifth Avenue department store, where it sold hours later. “Buyers from all over the country” soon clamored for clothes from her new studio,20 including the dancer Irene Castle and reps from stores as prominent as Filene’s in Boston and B. Altman & Company in New York. 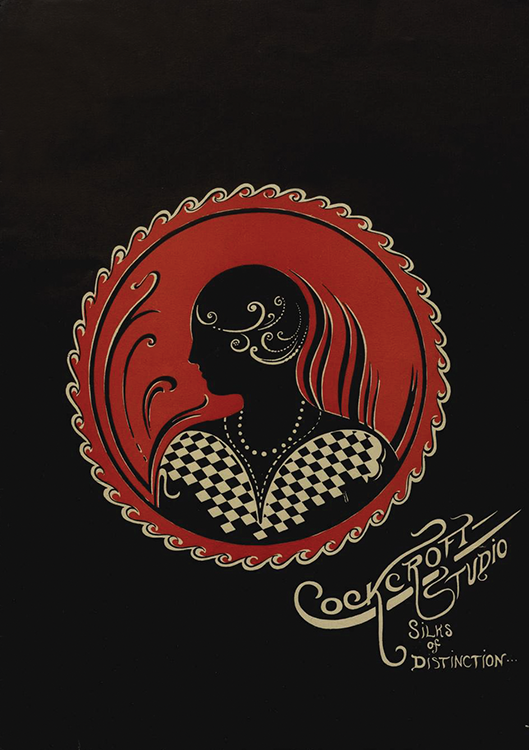 Cockcroft described her target market as “women who are innovators by nature”21 wanting “to look artistic without looking freakish.”22 In her office, a former stable on East 39th Street, Cockcroft hung antique weavings in “a fairyland of colors.”23 She also drew inspiration from her travels for her textile patterns, giving them names like Ahmen-ra, Moholica, and Khyber.24 Her staff of “young women with art training”25 stitched blouses, “personality gowns,” lingerie, “smoking togs,” and children’s wear. The best sellers were kits (about $7 retail) with silk rectangles that customers could sew into “illuminated blouses” (Fig. 2). Cockcroft and Weyand patented techniques for printing the kits’ fabrics with outlines of necklines, sleeves, and belts.26 “The rankest amateur could not go wrong” while finishing the garment in just over an hour.27 She exhibited textiles and clothing at the Brooklyn Museum and the Art Institute of Chicago, and she demonstrated her batik-making process for a color film, Gowns Venus Would Envy.28 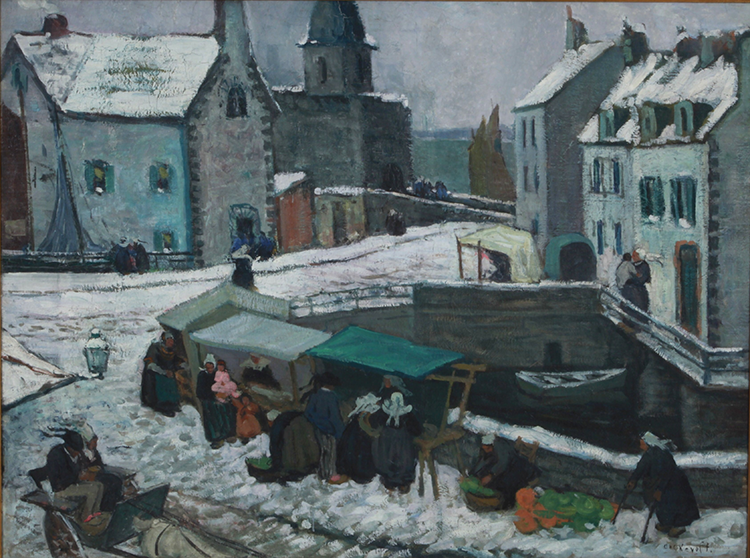 But even as the movie cameras were rolling, she was already restless. “Of course I miss my painting,” she told a journalist in 1920.29 She started spending much of her time at her country home, overlooking the Ramapo River in Sloatsburg, New York, about forty miles northeast of Manhattan. By 1930 or so, she had exchanged the clothing trade for “a life of extreme simplicity” in Sloatsburg.30 Her paint palette turned blazingly colorful. “Every inch of the canvas seems to be quite alive with fresh pigment,” the artist Clarence K. Chatterton observed, when Vassar College displayed her oil, watercolor, and pastel views of the Ramapo’s banks and French and Italian villages.31 She visited Florida, creating oils and watercolors of beaches, gardens, and swamplands that evoked “the violence and fecundity of the tropics.”32 Weyand meanwhile dabbled in real estate (newspapers ran notices of his property debts), painting, politics, and theater— he wrote a play about a greedy Ramapo-area landowner.33 He and Cockcroft volunteered at a nearby arts center and theater that the philanthropist Robert Frye Cutler had created in his family’s barn. Celebrities such as Helen Hayes and Vincent Price performed there, and Cockcroft painted “splashily modern” woodland scenes for the sets.34 She organized the center’s art exhibitions and classes for beginners. “No one should suppress a desire to play with color,” she said. Applying the first brushstrokes to any canvas “is to me like starting on an adventure, a trip to an unknown country. I never know what I may find, what I may see, or what I may discover and it keeps me traveling to see what is around the corner.”35 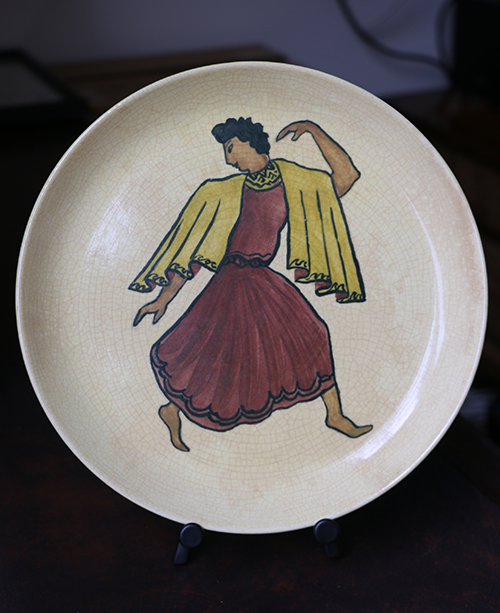 In 1933 she started “eagerly working” in ceramics, a local paper announced under the headline “Sloatsburg Artist Excels In New Medium.”36 She set up a pottery studio at her home and hired artist assistants including her neighbor, the landscape painter George Herbert Macrum,37 who had exhibited alongside her in Manhattan shows. Vogue and House and Garden recommended her metallic-rimmed dinnerware painted with bouquets, Greek deities, and leaping stags (Fig. 6). Her team molded vases in the shape of Greek goddesses’ heads and adapted putti with winged feet into candleholders. In 1951, at age seventy, she traveled to Haiti to introduce ceramics classes at the new Centre d’Art in Port-au-Prince, founded by her artist friend DeWitt C. Peters.38 In Haiti Cockcroft painted oils, watercolors, and tiles depicting women laboring in backyards. 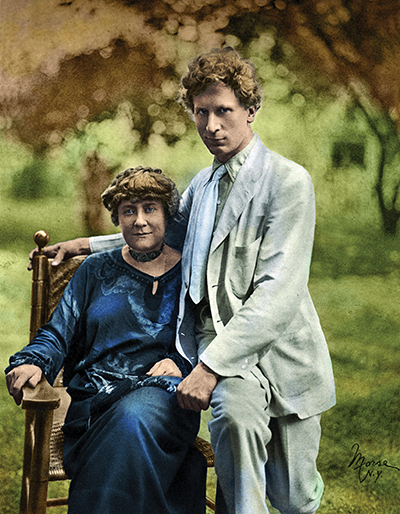 Fig. 7. Australian composer Percy Grainger and his mother, Rose, wearing a blouse designed by Cockcroft, in a photograph by Frederick E. Morse, 1921. Collection of Lebrecht Music and Arts/Alamy.

For her last exhibition, a 1961 group show at a Rockland County arts foundation, her portraits’ titles included Young Egyptian Woman and Nudes in the Ramapo Woods.39 By then, the art world had largely forgotten her. The New York Times’s tiny paid obituary called her “wife of the late Charles L. Weyand.”40 Her estate was soon dispersed at auction. Since then, a handful of her works have ended up at institutions and appeared in print.41 Her Provincetown circus view belongs to the Hunter Museum of American Art in Chattanooga, Tennessee. Morozov’s Concarneau scene is at the Pushkin State Museum of Fine Arts in Moscow. Two of her “illuminated blouses,” sewn for Rose Grainger, the mother of the Australian-born composer Percy Grainger, are at the Grainger Museum in Melbourne, Australia (Fig. 7). Thumbnail biographies online are riddled with errors, misreporting that she married as a teenager after socializing with Matisse, Renoir, and Gauguin, and that the Great Depression wiped out Weyand’s business.

I have tried to correct the record with a long Wikipedia article for Cockcroft, based on my forty-six-page CV for her. I have tracked down enthusiasts who keep dozens of her creations on view. I am still digging, seeking insights into how she used paint, silk, and clay as vehicles for “starting on an adventure, a trip to an unknown country.”