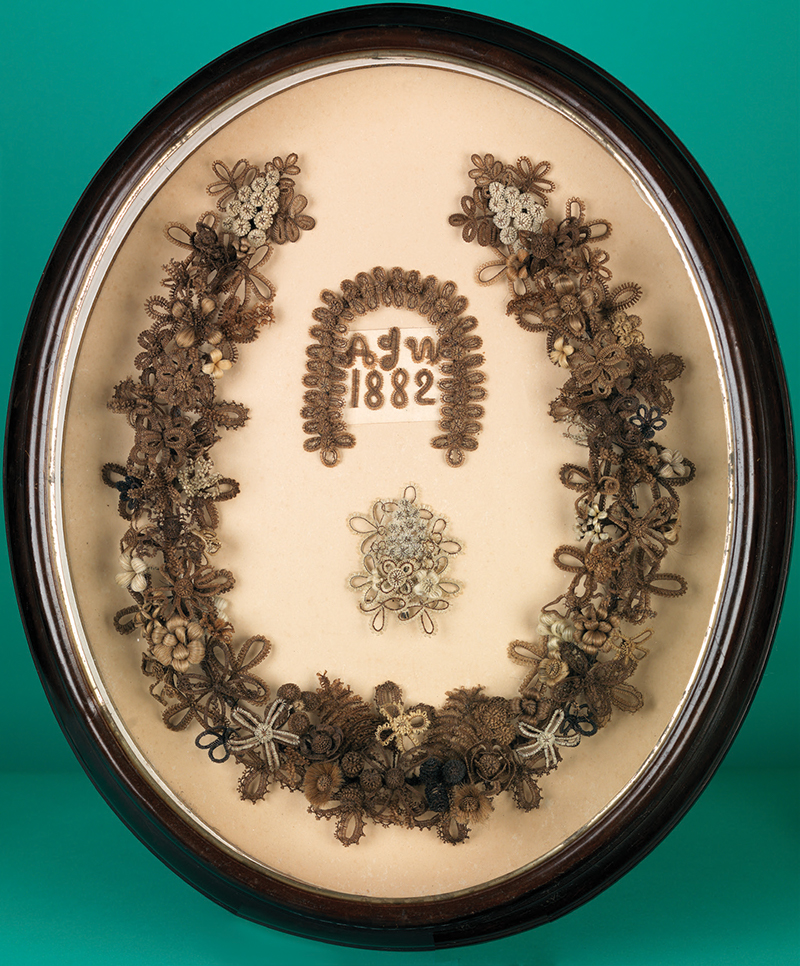 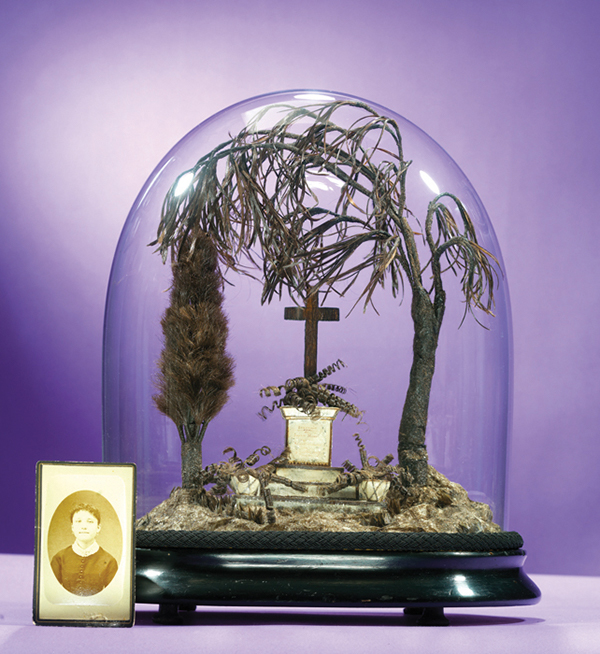 For almost a century the notion of using human hair as a material for artistic expression has been at best forgotten and, at worst, maligned as funereal and macabre. Today’s attitude stands in contrast to that of the Victorian era, when hair work was a means to express the tender belief that neither time nor death can destroy love—the inspiration for this decidedly sentimental art form. What better medium to use than hair, with its particularly personal and long-lasting characteristics? During that age of romanticism, an individual’s hair became a symbol of fidelity and remembrance. Hair was treasured as a token to be exchanged between friends in locks or in hair albums; or crafted into a wreath or bouquets of intricate flower shapes; or to create a lasting memorial to the departed. 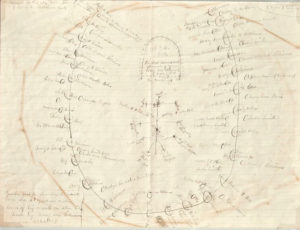 Fig. 2. Key to the names of the family members represented in the hair-work wreath in Fig. 4,
drawn by Amy Ida Williams, 1882–1883. Ink on paper, 19 ½ by 23 ½ inches. Whitenight and LaValley collection; photograph by Evi Numen, courtesy of the College of Physicians of Philadelphia and the Mütter Museum.

Such notions seem almost inconceivable in a day that is skeptical, healthier, and much more focused on the immediate moment. Woven Strands: The Art of Human Hair Work, an exhibition currently on view at the Mütter Museum at the College of Physicians in Philadelphia, takes us back to a time when life was slower and often more fleeting. A time when a young woman from Pennsylvania, Amy Ida Williams, dedicated a major part of one year of her life—spanning  1882 and 1883—to create a wreath made from the hair donated by fifty-two of her family members as well as herself (Fig. 4.). So keen was Amy to include all those who mattered in her life, she even—as shown in her key to the composition (Fig. 2)—made three flowers from the mane of her horse, Pollie.1 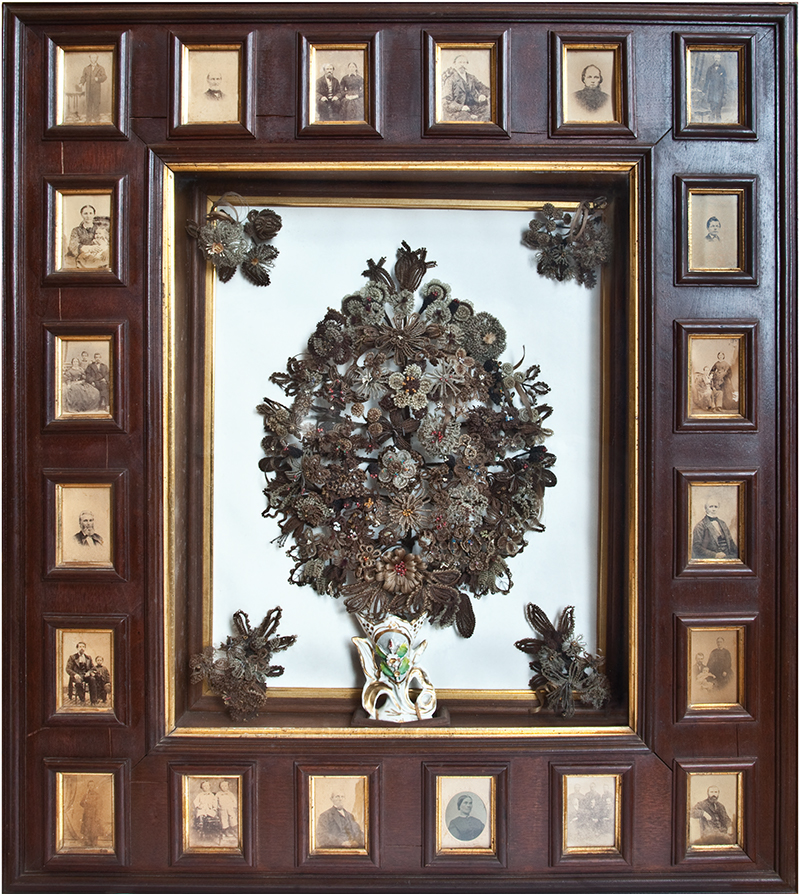 Fig. 3. Family piece featuring hair work and photographs, American, mid-to late nineteenth century. Gimp-work hair with glass beads and porcelain on white paper, and 20 cartes de visite by Scholfield Photographer, Westerly, Rhode Island, in what is probably the original wood frame; 36 by 32 inches. The piece was acquired from a Connecticut estate. Collection of Evan Michelson; Numen photograph, courtesy of the College of Physicians of Philadelphia and the Mütter Museum.

Perhaps surprisingly, the majority of hair work was created to honor the living. A circular wreath of hair flowers came to symbolize the continuum or circle of life by representing the eldest members of a family along with the youngest. The advent of photography in the mid-nineteenth century allowed hair artists to include the images of those who graciously gave their locks. Oftentimes a photo was used as a central motif in a hair wreath as a personal reference. The prosperous hair artist might choose to include up to twenty cartes de visite of family members to create a genealogical frame for a hair-work bouquet, as seen in the wonderful example from a prominent Connecticut estate (Fig. 3).

Hair artists were predominantly female and would have come from the middle and upper classes, since an ample amount of leisure time was required to engage in such parlor pastimes. Detailed instructions for the techniques required could be found in books such as Ladies’ Fancy Work: Hints and Helps to Home Taste and Recreations, published by Henry T. Williams in 1877. One technique used to create the three-dimensional flowers for a hair wreath or bouquet was gimp work. This involved making a chain, or gimp, of tiny loops of hair on thin wire. After a length was achieved it could be formed into a petal or leaf (Fig. 5). This method allowed hair artists to readily exhibit their skill and mastery. The virtuosity and diversity of the flowers, both stylized and realistic, were qualities to be judged and appreciated by fellow hair artisans and family members.

Godey’s Lady’s Book, published from 1830 to 1878 in Philadelphia by Sarah J. Hale and Louis A. Godey, had a circulation of more than 150,000 by the 1860s. Known as the “Queen of the Monthlies,” it was the periodical of choice for anyone wishing to remain au courant in the areas of household taste, fashion, and fancy work. In its March 1851 issue, Godey’s included detailed instructions on the “palette” technique for hair work. Godey’s suggested a list of materials needed—“ivory, such as miniature painters use, short lengths of hair, viz: from two to four inches, and gum dragon ”—and the tools required: “a fine-edged penknife, a very delicate pair of scissors, with fine sharp points, a couple of fine camel’s-hair pencils, a fine stiletto or long pin, and a palette.”2 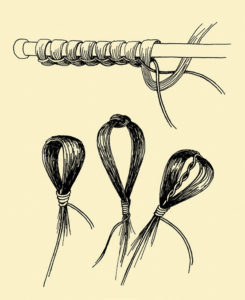 Fig. 5. Undated illustration of how gimp work is created by looping and wrapping hair around a wire, which can then be manipulated into the desired shapes. Whitenight and LaValley collection.

Once the materials and tools were assembled, a hair artist flattened the shocks of hair on the palette and brushed on gum dragon—a binding agent derived from plant sap—to create a sheet of stiffened hair. Patterns from the intended design were placed on the hair. The various shapes were cut out meticulously on the bias and fastened to make a background of flower, leaf, plume or other forms. Glass beads and thin gold wire could be added to enhance the designs (Fig. 6).

The skilled hair artist could use this procedure to make entire scenes, such as one from mid- to late nineteenth century France (Fig. 8). As the title L’Assomption suggests, the scene depicts the moment when the Virgin Mary, at the end of her earthly life, ascends to heaven aided by three angels. This religious masterpiece was created entirely using hair in the palette-work technique on glass. The skin tones are executed in paint. 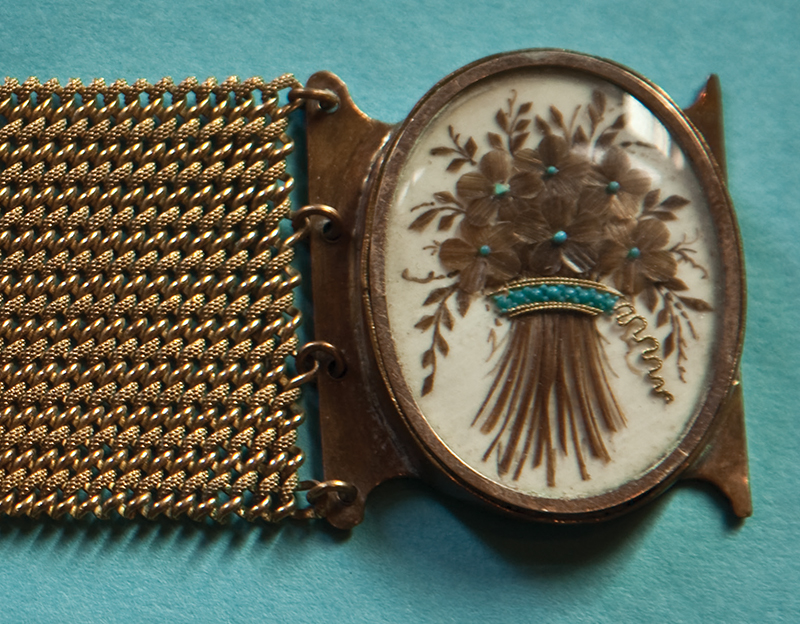 Fig. 6. Detail of a gold bracelet with clasp containing a hair-work scene, possibly English, mid-nineteenth century. Palette-work hair and turquoise on ivory, gold, pinchbeck, and glass; height of clasp approximately 1 inch. Collection of Eden Daniels; Numen photograph, courtesy of the College of Physicians of Philadelphia and the Mütter Museum.

The term memento mori, meaning “remember, you will die,” has been represented in a multitude of forms as humans have contemplated and depicted the life hereafter. Talismans and effigies from the ancient world included symbolic images such as a skeleton, skull and crossbones, an inverted torch, a scythe, an hourglass, or a weeping willow tree. One of the most popular representations was the gravesite. The decoration on a small late eighteenth century English sandalwood box has as its motif a gravesite painted on ivory in sepia and dissolved hair (Fig. 7). The hair would have been ground into a fine powder and mixed with a gum solution as the vehicle. Both the woman and the willow are weeping over a tomb that bears the inscription “farewell but not for ever.” Inside the box is a glass-encased design of woven dark hair as a background, along with three curls of hair, each with a different initial: H, M, and L. The inscription on the interior gold bezel reads: “Ann Woodd Died 23 April 1791 Aged 26.” 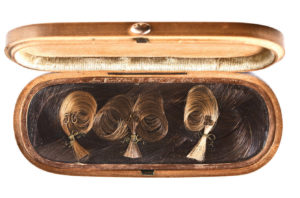 Figs. 7a, 7b. “Farewell But Not Forever” memorial box, English, 1791. Inscribed “Ann Woodd, Died 23 April 1791 Aged 26” on the bezel. Dissolved hair with sepia pigment on ivory, palettework hair, sandalwood, glass, and gold; height 2, width 5 ½ inches. Collection of Jennifer Berman; Numen photograph, courtesy of the College of Physicians of Philadelphia and the Mütter Museum.

An abundance of small hair-work memorials and jewelry pieces was made during the seventeenth and eighteenth centuries, but the nineteenth century saw memorial hair work become an art form. Queen Victoria spent forty years of her life memorializing her beloved consort, Prince Albert, and her example helped foster a fashion of memorial arts not only in Britain but also on the European continent. Mourning jewelry—small scaled, intimate—was always the most popular genre of hair work. But hair artists of the period were encouraged to create much more extravagant expressions of bereavement—compositions in hair displayed in shadow boxes and glass domes. The most impressive I have encountered as a collector is the nineteenth-century French cemetery scene under glass shown in Figure 1. The translated inscription on the tomb reads: “In memory of Sophie Henri, age 21 years, deceased 9 July, 1887.”

A strain of Victorian revivalism has existed in the antiques collecting world since the 1960s, and perhaps the current vogue for the artisanal and the handcrafted—not to mention for full beards and other nineteenth-century-style personal accoutrements— signals a furthering of that interest.3 With the exhibition Woven Strands at the Mütter Museum, it is hoped that the art of human hair work is coming out of the shadows into its deserved place as an acknowledged art form to be viewed by younger generations, many of whom seek the unusual and the arcane. 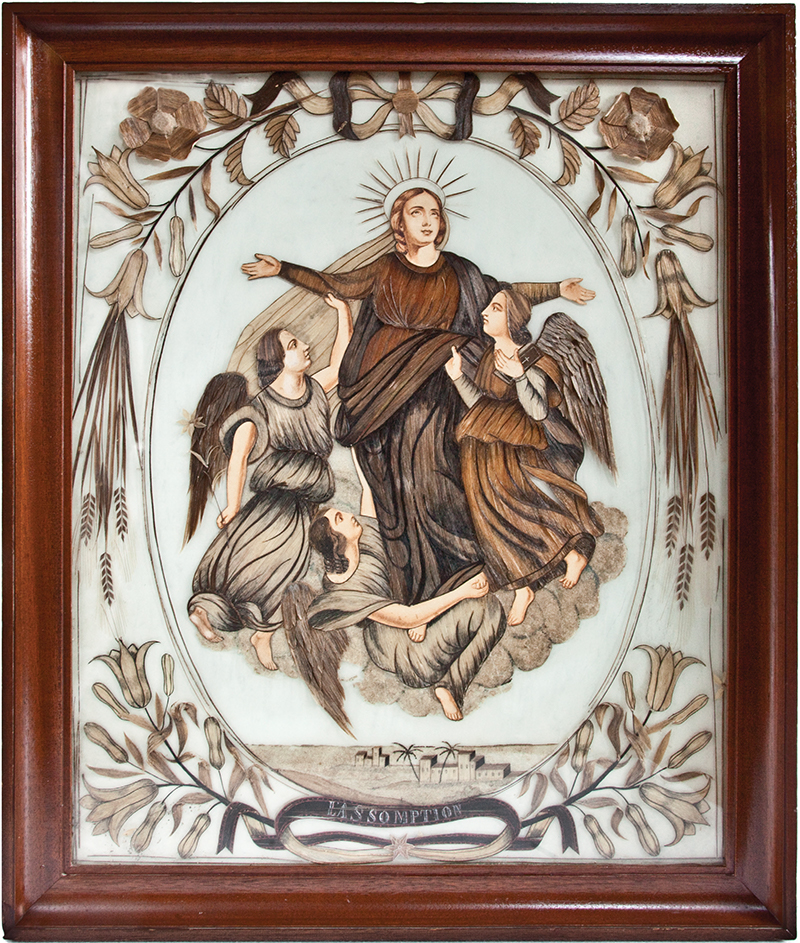 Fig. 8. L’Assomption, French, mid- to late nineteenth century. Palette-work hair, paint, and ink on glass in original wood frame, 32 1/2 by 27 1/2 inches. Collection of Pamela Moschini; Numen photograph, courtesy of the College of Physicians of Philadelphia and the Mütter Museum.

Woven Strands: The Art of Human Hair Work is on view at the Mütter Museum through September 16.

The Mütter Museum of the College of Physicians of Philadelphia is a medical history museum with a focus on humanities. Since 2012, the Mütter has each year hosted two exhibitions of contemporary art that relates to medicine, the human body, or its collection. Occasionally, the Mütter will host artists for short study periods to create work directly from museum materials.

1 None of these details were known when the piece was purchased, via phone bid, from a south-central Pennsylvania auction in 1995. Upon examination, the key to the hair work was discovered tucked behind the composition’s wooden backing. 2 Godey’s Lady’s Book, Philadelphia, vol. 42 (March 1851), p. 197. 3 In 1997 a small group of hair-work collectors came together in Kansas City, Missouri, to form the Victorian Hairwork Society. The members included Jeannine C. Bell, author and collector; Leila Cohoon, founder of Leila’s Hair Museum in Independence, Missouri; and Marlys Fladeland, collector and devotee. Other enthusiasts included Ruth Gordon, who lectured and taught the art of hair-work, as well as Shirley Sue Swaab, the respected lecturer on most things Victorian. hairworksociety.org.

JOHN WHITENIGHT is an artist, educator, and lecturer. He is currently a member of the American Art Advisory Committee at the Philadelphia Museum of Art and is the author of Under Glass, A Victorian Obsession.