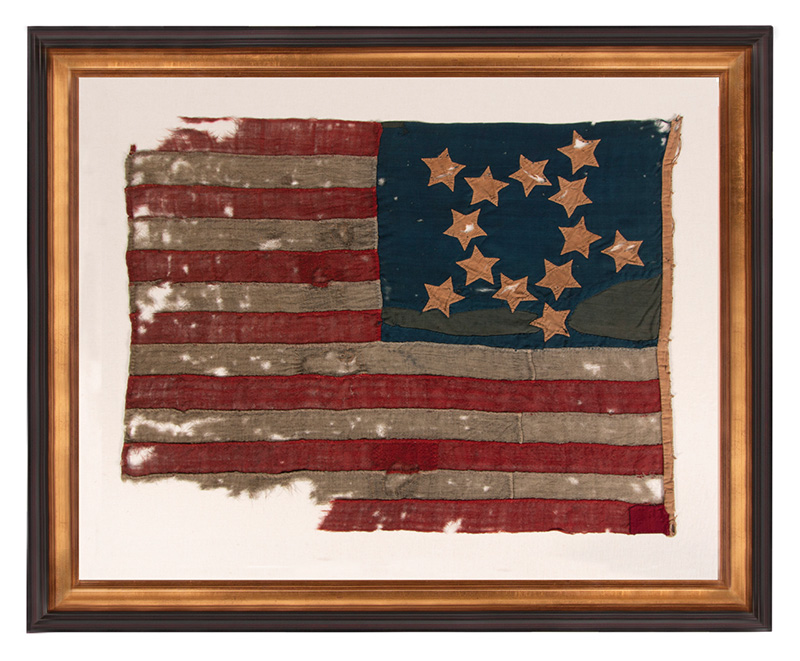 Everyone knows there were thirteen original states. But how many people realize that when, in 1777, the Second Continental Congress resolved “That the flag of the thirteen United States be thirteen stripes, alternate red and white: that the union be thirteen stars, white in a blue field, representing a new constellation,” up to eighty, perhaps as many as one hundred different thirteen-star patterns would find their way onto official American flags? A New Constellation: A Collection of Historic 13-Star Flags, on view at the Museum of the American Revolution until July 21 and curated by specialist Jeff R. Bridgman from his own comprehensive holdings, showcases thirty-two of these patterns, sparking our desire to learn more.

Eleanor Gustafson/The Magazine ANTIQUES: It seems surprising that thirteen is one of the most common star counts on American flags surviving from the nineteenth century. Why is this?

Jeff R. Bridgman: First off, it is important to note that any American national flag that has ever been official remains appropriate to fly, thirteen-star flags no less so than fifty-star ones. They have been produced for a whole host of patriotic as well as practical reasons over the years, even after the adoption of acts that increased the number of stars. One of their more prominent uses, post-Revolutionary War, occurred in 1824–1825, when Lafayette returned to the US for America’s fiftieth birthday. Flags with thirteen stars were flown in celebration of the nation’s centennial in 1876 and sesquicentennial in 1926. They were displayed during the Civil War to reference past struggles for American liberty. The US Navy flew thirteen-star flags on small boats until 1916, because it was easier to discern fewer stars at a distance on a small flag.

EG/TMA: So what did the first thirteen-star flag look like?

JB: Believe it or not, no one is sure, because no specification of the pattern was given. Despite the legend, Betsy Ross’s circle is not likely to have been the original pattern, judging by the fact that so many thirteen-star flags exist without it. Flag historians generally agree that the individual who played the primary role in the first flag’s design was Francis Hopkinson, a native Philadelphian, delegate to the Continental Congress from New Jersey, signer of the Declaration of Independence, and an amateur artist with an interest in heraldry. Resigning his congressional role in late 1776, he joined the Continental Navy Board, with its need for a new signal to identify Continental ships on the open seas—the thrust behind America’s impending need for a national flag. Unfortunately, however, none of his designs are known to survive.

EG/TMA: Can you tell us about the most familiar variations and then discuss the history or design of two or three of the rarest or most interesting in the show?

JB: The most common pattern in the later nineteenth and early twentieth centuries was 3-2-3-2-3. Then the Betsy Ross circle pattern takes over. Another common pattern that emerged during the Civil War and was popular at the 1876 Centennial was what is known as the medallion configuration: a center star surrounded by a wreath of eight stars, with a single star in each corner of the blue canton.

The flag shown above features thirteen stars in a five-pointed variation of what is known as the “Great Star” pattern—a star made out of stars. Unique among known examples and one of the earliest known American flags to survive, it was formerly part of the collection of Boleslaw and Marie-Louise D’Otrange Mastai, the first major collectors of early flags. At upper left is a nearly six-by-thirteen-foot flag found in Gloucester, Massachusetts. The canton features a seemingly random star configuration that might have been arranged to crudely form the letters U and S. Early American flags with prominent eagles have long received the label “Indian Peace Flags,” said to have been presented by the Federal Government to Native American tribes as tokens of peace in the early nineteenth century. While it seems from historical records that this practice did take place, no actual flag currently survives with a solid provenance confirming its use for the purpose. The third flag shown is attributed to New York City flag-maker Sarah McFadden and was probably made for a Hudson River steamer.