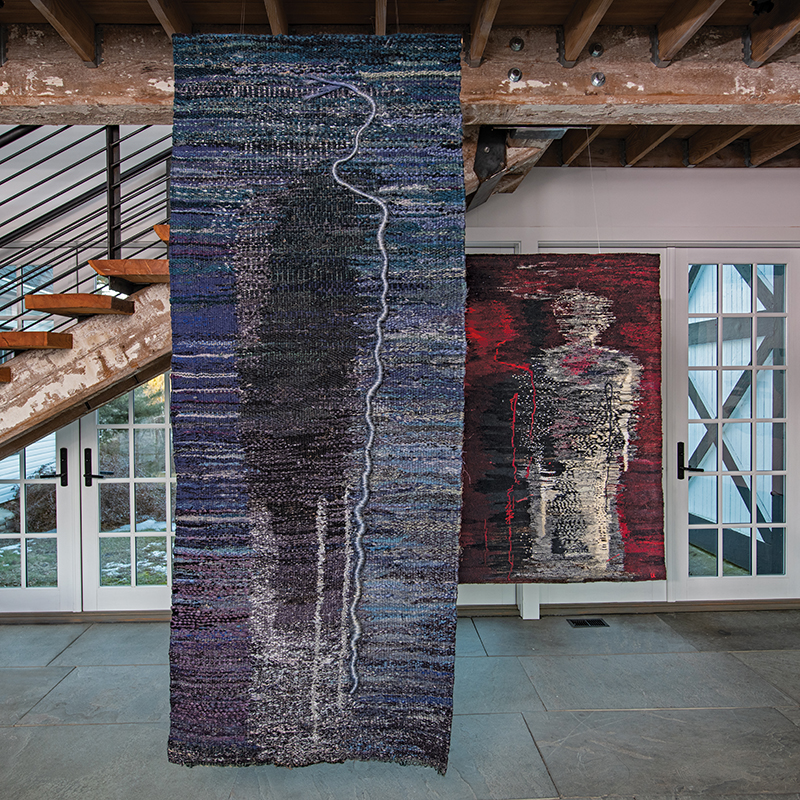 It’s been a long, hard winter for fiber art. At least, that is how it has looked in most of the world, until very recently. The discipline enjoyed a sharp rise in visibility in the 1960s, with exhibitions at the Museum of Modern Art in New York and the Stedelijk Museum in Amsterdam; was the subject of numerous publications (most notably those by Jack Lenor Larsen and Mildred Constantine); and earned a widespread popular embrace, fueled by the counterculture. Then, equally precipitous, came the decline. Fiber art was parodied as “macramé”—actually a very specific and useful knotting technique—a genre for hairy hippies. Now, this long period of inattention is coming to a close, with a recent major survey exhibition at the Institute of Contemporary Art in Boston, and renewed examination of such figures as Anni Albers, Ruth Asawa, Sheila Hicks, and Lenore Tawney. Spring has finally sprung.

All along, one place stood against the prevailing indifference: BrownGrotta Arts. Founded in 1987, when fiber art was at its reputational nadir, the gallery is located in a quiet corner of Connecticut, in a contemporized barn built in 1895. Its proprietors, married couple Rhonda Brown and Tom Grotta, have knowledge of and enthusiasm for international textiles that are simply unmatched. Grotta came to the subject early—at birth, in fact. His parents, Lou and Sandy, were among the country’s pioneering collectors of studio craft.

Their interest in the Canadian tapestry artist Mariette Rousseau-Vermette led to Grotta’s initial involvement in the medium. Brown, meanwhile, has expertise in publishing, including a law degree, and oversees editorial work at the gallery.

Over its three decades of existence, BrownGrotta has kept alive the flame for scholarship on fiber art and weaving of other kinds. The business model has always been unusual: in many respects, it resembles a craft-based non-profit—like the Center for Art in Wood or the Clay Studio, both in Philadelphia—more than a commercial gallery. Because it is located off the beaten path, the gallery mounts just one exhibition a year, which is open to the public only for a few weeks. This affords time to concentrate on what Brown and Grotta do best: support research and awareness of the field. They published their first catalogue in 1991—on the Finnish basket maker Markku Kosonen—and have produced numerous monographs and thematic books ever since, typically featuring images by Grotta, who studied photography at the Rochester Institute of Technology.

The gallery’s current exhibition typifies its wide-ranging approach. Entitled Art and Identity: An Inter­national View, the show includes artists from more than twenty nations—the opening spread in the exhibition catalogue is a world map—and runs the gamut of techniques. There are, of course, baskets and weavings, but also unexpected processes like folded wire mesh (Jin Sook-So from Korea) and a tapestry made on a digital Jacquard loom by Lia Cook, an American national treasure. Materials are equally diverse, with nails and safety pins, bark, linen and cotton, paper and polyester all making appearances. Some artists’ materials are little poems in their own right, such as the 1962 Encyclopedia Britannica pages on poplar in Wendy Wahl’s Honey and Hive.

Just as important is the aesthetic range of the works. Some recall the shaggy looseness of the countercultural era—which looks really good right about now—while others, like those of the superlative Danish weaver Gudrun Pagter, channel modernist abstraction.  Still others, such as a lacquered basket by Jiro Yonezawa, intensify ancient traditions to electrifying effect. Ezra Shales, in an essay published by the gallery in 2015, noted that textile history has never subscribed to narratives of linear progress:  “There is no singular moment or manner of bundling fiber, nor any grand revolution that illuminates the night more than any other.”  Though the field has had its leading lights, there is no canon, nor even necessarily a shared set of references that bind it together.

At another time in history, this eclecticism might have made fiber art seem wayward and non-rigorous. In our present multivalent moment, it feels like an ideal state, to which other artistic mediums might well aspire. Despite its relatively modest scale—tiny, compared to the mega-galleries in nearby New York City—BrownGrotta has managed to encompass everything that fiber art has had to offer. The current rediscovery of fiber art has already begun to position the medium differently—not at the center of the art world, as the art world is permanently de-centered, but simply at a level commensurate with its achievements. As this moment arrives, though, it is good to remember that it wasn’t inevitable. Someone had to be minding the store.