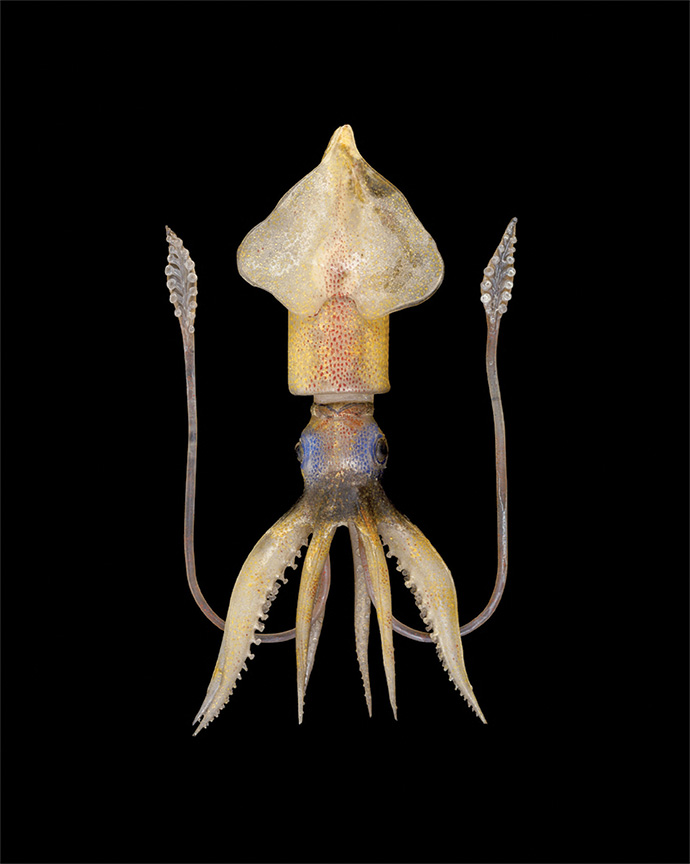 A summer day on a Cape Cod beach. Blue skies. Warm weather. A slight breeze. Strolling with my wife and four young children. A moment to relax, a time to unwind. Could it get any better? STOP! NOW! DON’T TOUCH THAT!

Model of Ommastrephes sagittatus (Blaschka Nr. 578) by Leopold (1822–1895) and Rudolf Blaschka (1857–1939), 1885. Overall height, approximately 7 7/8 inches. The Blaschkas’ serene pose of this squid belies its powerful suckers and fierce predation of herring, crustaceans, and other cephalopods. A strong swimmer, the European flying squid glides above the water to escape its predators, including tuna, cod, and marine mammals. Its wide geographic distribution keeps it at a low conservation concern, despite its widespread use as both bait and food. Except as noted, the objects illustrated are in the collection of Cornell University, Ithaca, New York, Department of Ecology and Evolutionary Biology.

I looked on with horror as my son was about to grasp an enormous gelatinous blob, its tentacles still distinguishable, stingers about to launch their toxic venom. Startled by my urgent shouts, he backed off, just in time to avoid what could have been an extremely painful introduction to the world of marine invertebrates. Fortunately, there’s a less risky way to explore this world, one maybe even more enjoyable than a walk along a Cape Cod beach. It’s the Corning Museum of Glass’s temporary exhibition, Fragile Legacy: The Marine Invertebrate Glass Models of Leopold and Rudolf Blaschka, on view from May 14 to January 8, 2017. Set within twin conservation contexts—of marine life and of glass—the stunning specimens tell stories of the Blaschka artists, of the interest in marine life and the dissemination of knowledge in the nineteenth century, of the Blaschkas’ tools and techniques for creating these beautiful glass models, and finally, of the objects themselves as an art form.

Model of Astroides calycularis (Blaschka Nr. 119), 1885. Height 2 1/8, width 3 3/16, depth 1 7/8 inches. Although accurate population data on many invertebrate species is lacking, this model is the only one in Fragile Legacy to represent an invertebrate currently considered endangered. This orange cup coral lives in the Mediterranean Sea, but corals worldwide are endangered by ocean warming and acidification.

The Blaschka family’s glassmaking background goes back to the fifteenth century, when a worker of decorative glass named Blaschka (who is said to have come from Venice) was documented in Prague. Expertise in costume jewelry and decorative objects eventually led a descendant, Leopold, in a new direction: beginning in the 1860s, decades before they began the well-known flowers for Harvard University, he and his son, Rudolf (who was working with his father by 1873), produced glass models of the soft-bodied undersea creatures known as marine invertebrates. Carefully crafted in Dresden, Germany, these teaching models were shipped to universities and museums worldwide. By 1888 father and son offered seven hundred species of glass models that were “universally acknowledged as being perfectly true to nature.”*

Glass marine invertebrate models fuse multiple historical ingredients. Cabinets of wonder and curiosity, beginning in the mid-sixteenth century, integrated natural history and artifice through the gathering of naturalia and artificialia. The collection served as a microcosm of the macrocosm, its owner conveniently placed at an important intersection of these realms. Only much later did these collections become instruments of public instruction.

Drawing and model of Cladonema radiatum (Blaschka Nr. 141). Drawing: 1863–1890; ink, graphite, and watercolor on paper, 16 1/8 by 13 inches. Model: 1885; height 7 ¾ inches. This sea jelly, like many hydra, has a polyp form (shaped like a cylinder) and a medusa form (the umbrella-shaped body generally associated with sea jellies). Hydroids can grow new body parts, thus their name. Abraham Trembley’s 1740 discovery of this invertebrate’s ability to do so is part of the Corning Museum of Glass’s complementary exhibition Revealing the Invisible: The History of Glass and the Microscope, on view to March 19, 2017.

A more proximate motivation came from nineteenth-century developments in education, especially the rise of German research universities. From 1809, when Wilhelm von Humboldt articulated this vision, the shift from transmitting classical knowledge to conducting innovative research, typically meaning scientific research, transformed the purpose of higher education, and the spaces in which learning took place. The classroom became a seminar or a laboratory, with the student conducting research led by a professorial mentor.

The shift gave rise to American land grant universities in 1862. These institutions, either transformed or newly formed, were to focus on science, especially practical science such as agriculture and engineering. One such school was Cornell University, founded in 1865 and opened in 1868. In 1885 Cornell purchased 570 Blaschka glass marine invertebrate models. All but a couple of the nearly seventy models on display in the current exhibition are on loan from the university’s department of ecology and evolutionary biology.

In the mid-1800s scientists continued to travel the globe in search of new discoveries and new species. Universities and museums collected and displayed an astonishing variety of natural specimens, but marine invertebrates, such as octopi or sea stars, presented a problem: they collapsed and their colors faded, even when preserved in alcohol or formaldehyde. Glass is the perfect material to capture their transparency, translucency, and vivid color, also giving an impression of permanence to these rapidly disintegrating creatures. The stability of glass models appealed to curators and educators who otherwise had to replace specimens frequently.

Drawing of Tubularia indivisa and detail of the model of the male colony (Blaschka Nr. 191a). Drawing: 1863–1890; ink and watercolor on paper, 25 5/8 by 15 3/8 inches. Model: 1885; height overall approximately 4 3/4 inches. The drawing derives from an illustration by naturalist George Allman (1812–1898) in his Monograph of the gymnoblastic or tubularian hydroids (London, 1871–1872). The Blaschkas offered two different models of this Tubularia, one depicting stages of development (Blaschka Nr. 191), the other showing only the male colony (illustrated here). The model is supported by a metal wire network covered in sections of glass tubing attached to a paperboard mount. Colorless pearls of glass, called “tubularia grapes” by the Blaschkas, drape from the flower-like tips of the painted stalks.

After the death of his first wife, Leopold Blaschka sailed for the Americas to recover from his grief. En route, during a period of calm winds off the Azores, sea jellies captivated his attention. As he drew them, he could not have imagined that he would eventually spend decades transforming them into glass.

The Blaschkas created hundreds of marine invertebrate drawings between 1863 and 1890. The earliest examples copied book illustrations, but over time their drawings were increasingly informed by their own observations of living species taken at marine stations or shipped to their home aquarium. Their models likewise increased in sophistication and detail. Each drawing is a careful study of marine invertebrate form and subtle variations of color. Delicate, wispy tendrils and gentle curves of tentacles convey movement. Replicating these elusive sea creatures presented a challenge few glassworkers were equipped to tackle.

Model of Physophora hydrostatica [magnifica] (Blaschka Nr. 213), 1885. Height 12 5/8 inches. The conservators found signs of glass deterioration in the form of white crystals and liquid droplets on many models, including this sea jelly. Here, their treatment involved removing the crystals and droplets, as well as reconstructing and reattaching most of the tentacles.

Rarely can exhibitions display the tools and materials used by artists of the past. Fragile Legacy is an exception, displaying numerous items directly from the Blaschkas’ studio: matchboxes with glass model components, glass powders, rods, tubes, glassmaking tools, a spool of metal wire, a paraffin/alcohol lamp, and Rudolf’s lampworking bench. Although Rudolf and his wife had no children, their niece and nephew retained ownership of the Dresden studio, which received little attention after Rudolf’s death in 1939 and was damaged by a bomb strike during World War II. In 1993 the studio’s contents were sold to the Corning Museum of Glass and to Harvard University.

Leopold and Rudolf pre-made a variety of individual glass body parts to streamline and standardize their production process. Only after receiving an order would they compile parts into a model by assembling them with metal wires and glue. Once assembled, the model was painted and embellished to appear as realistic as possible. Although both participated in all aspects of production, Leopold preferred to make the glass, while his son focused his efforts on painting and finishing the models.

Model of Opheodesoma [Synapta] glabra (Blaschka Nr. 284), 1885. Height 3 15/16, width 10 13/16, depth 9 inches. The Blaschkas painted the model of this sinuous sea cucumber with textured paint (enamel) and glued solid glass dots onto it. Climate change and the massharvesting of these creatures for human food has created an uncertain future for the species.

The Blaschkas advertised their models in catalogues and worked with agents in the United States, Germany, and the United Kingdom to sell and distribute throughout Europe and around the world. Archival documents and Leopold’s preface in the North American and German catalogues show that the Blaschkas sold to at least a hundred institutions in twenty-one countries, and might have made as many as ten thousand glass marine invertebrate models.

The Blaschkas’ sole marketing agent for North America was Henry Ward, an adventurer and professor of natural science. Ward created his own business in Rochester, New York, supplying schools and universities around the nation with natural history specimens. Ward’s 1878 catalogue featured 630 Blaschka models, with prices ranging from 20¢ (Nr. 518: the sea snail Clausilia similis) to $7 (Nr. 270: the snake fish Holothuria coluber).

Each marine invertebrate glass model on display, like the soft-bodied undersea creature it represents, is fragile. Models and species alike merit conservation efforts. Corning Museum of Glass conservators Stephen Koob and Astrid van Giffen worked over the course of two years in preparation for this exhibition. Every treatment is thoroughly documented and photographed.

As regards the undersea creatures themselves, marine conservationists, such as Cornell biologist C. Drew Harvell, focus on safeguarding marine ecosystems to prevent further damage. Harvell uses the Blaschka models to create awareness of climate change, overfishing, and other issues relating to efforts for protecting and preserving the oceans.

Some of the most spectacular Blaschka models reveal the microscopic world of radiolaria, tiny animals (about .2 mm in diameter) that produce finely detailed, geometrically fascinating skeletons. Their slender glass spikes and intricate inner spheres of glass networks make these models incredibly fragile and challenging to move. Because Cornell University did not purchase any radiolaria, and other institutions cannot lend theirs, Corning’s exhibition does not feature these in glass form.

All is not lost. Radiolarian and other Blaschka models motivated artist Guido Mocafico to capture their elegance in his stunning photographs, nine of which are on display and will linger on in the memory of every visitor to the exhibition. Mocafico is one of many contemporary artists still inspired by the work of Leopold and Rudolf, and whose works on display in Corning directly reference or allude to the Blaschkas’ models.

Experiencing the Blaschkas’ work and responses to it can be life-changing. Perhaps I’ll never encounter a jellyfish without prompting that distant memory, but rather than viewing one as a threat, I now see a simple, intricate, fragile, beautiful creature, one connected to other species, including our own, in ways that we do not yet fully appreciate. To change your perspective on a jellyfish you have only to visit the Corning Museum of Glass.

MARVIN BOLT, Curator of Science and Technology at the Corning Museum of Glass, researches seventeenth-century telescopes and various topics that bring together science, history, and art.